Power rankings: Why Big 12 football will be much improved in 2017 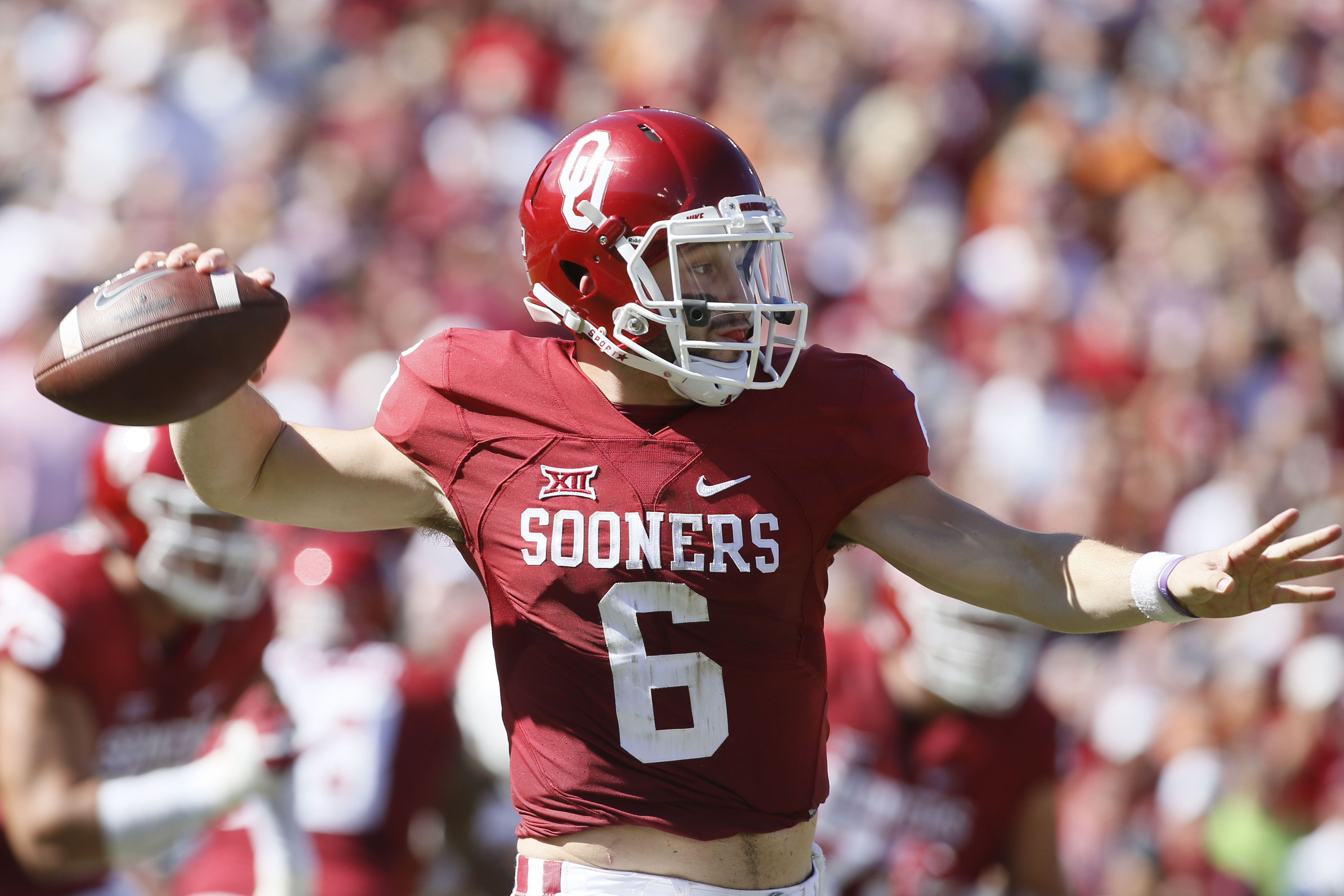 Expectations remain as high as ever with Lincoln Riley in charge.

The Big 12 was the worst power conference in the country in 2016. A few months after the season ended, the Big 12 also produced the fewest draft picks of any power conference. It’s funny how those two data points work in concert, isn’t it? We treat them like separate things, and we reacted to the Big 12’s draft problems like it was a sign of future doom instead of a reinforcement of what we already knew.

Make no mistake, though: This was not a good conference. And you can break the causes of this struggle into two categories: Texas and non-Texas.

The good news: almost everybody is projected to improve. This was a young conference — another reason for the draft issues — and S&P+ expects seven of 10 teams to perform better this fall. Two others (WVU and Kansas) have enough transfers to lead you to believe they might avoid regression as well.

Texas was one of the youngest teams in the country, and TCU wasn’t far behind. They’re both projected to surge. Oklahoma State might have the best passing game in the country. Kansas State could have one of the nation’s best running games.

Texas is projected 16th in S&P+, and the top three non-OU/UT teams are projected to improve their average to 23.7. Things aren’t A-OK all of a sudden, but there should be a bounce back.

Great. Now who challenges OU? There still isn’t a clear equal in my eyes. But there are a few candidates.

The Pokes might be the most fun football team on the planet. That’s good and bad. 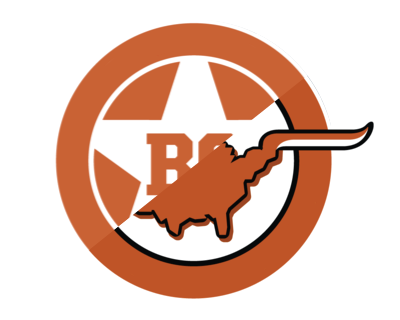 The Horns have been a totally average Big 12 team for years. That’s ending under Tom Herman.

The Frogs have experience and upside, but far less benefit of the doubt at this point.

I’m not going to lie: it’s easy to talk yourself into Texas. The Longhorns have major defensive questions like virtually everybody in the conference. But their level of returning production all but guarantees stark improvement, and, well, there might not be a better underdog coach in the country than Tom Herman.

This is Herman’s one chance to be an underdog coach at Texas. We don’t know what he’s like as a program builder because we haven’t seen him build a program, but the lightning-in-a-bottle potential is high.

Matt Rhule gets a mulligan year, but he might not need it.

It's a rebuilding year in Morgantown. Top-25 hype isn't fair.

The Cyclones haven’t had this much upside since Seneca Wallace was in town.

Baylor could have the best defense in the conference but has major offensive questions. WVU is coming off a solid season and inked a lot of interesting transfers but has to replace more of last year’s production than any other power conference team. Iowa State is looking to move from being a three-quarter team to being a four-quarter team.

I can talk myself into any of the three — seriously, don’t be surprised if ISU turns out to be pretty damn good — but I feel they have bigger question marks than the four in Tier 2.

As usual, the offense will be great, but the defense will probably waste it.

I like this conference’s bottom two more than I have in recent years, but they’re still the bottom two in my eyes. 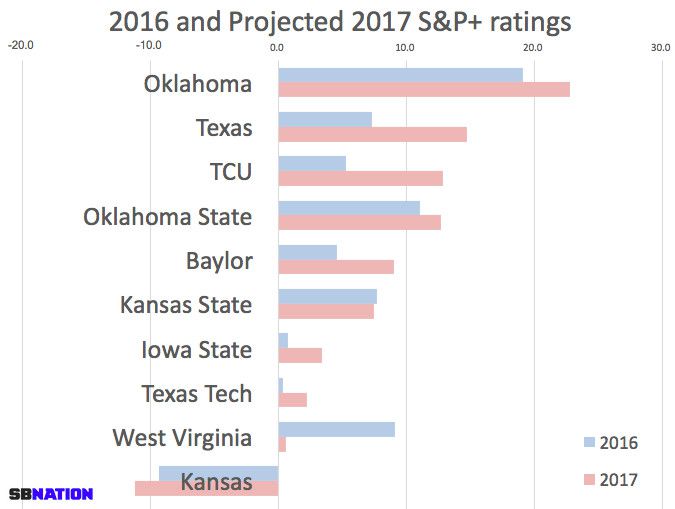 Massive returning production and top-30 recruiting are enough to push Texas and TCU to the top of the "not OU" list, but OSU isn’t far behind. They’re all looking up at faraway OU, though. 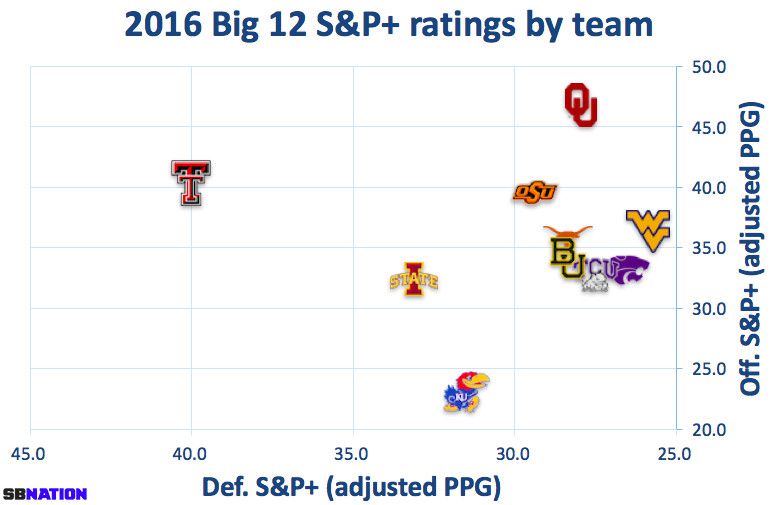 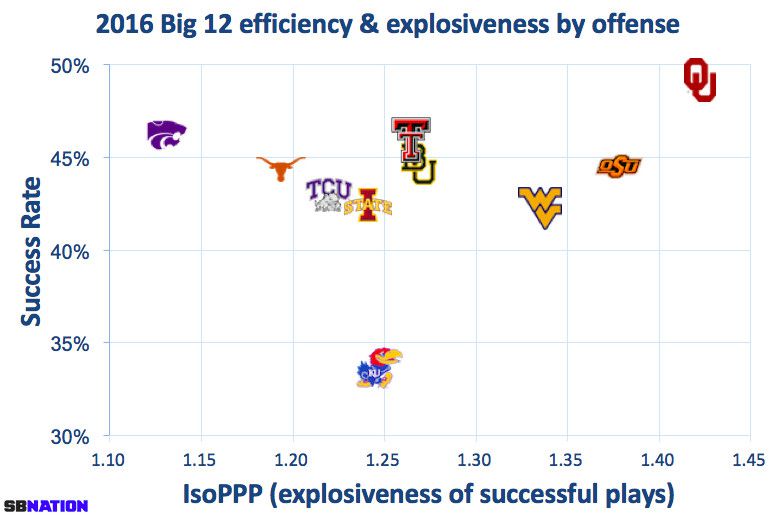 Eight of 10 teams were packed together from an efficiency standpoint in 2016, but big-play potential varied wildly. OU should fall back to the pack, but as long as coordinator Lincoln Riley and quarterback Baker Mayfield are in Norman, the ceiling’s really high.

There’s quite a bit of turnover at the skill positions, but eight teams return at least a part-time starting quarterback, and there are a lot of good linemen. And the best line in the conference will be protecting the best player in the conference. 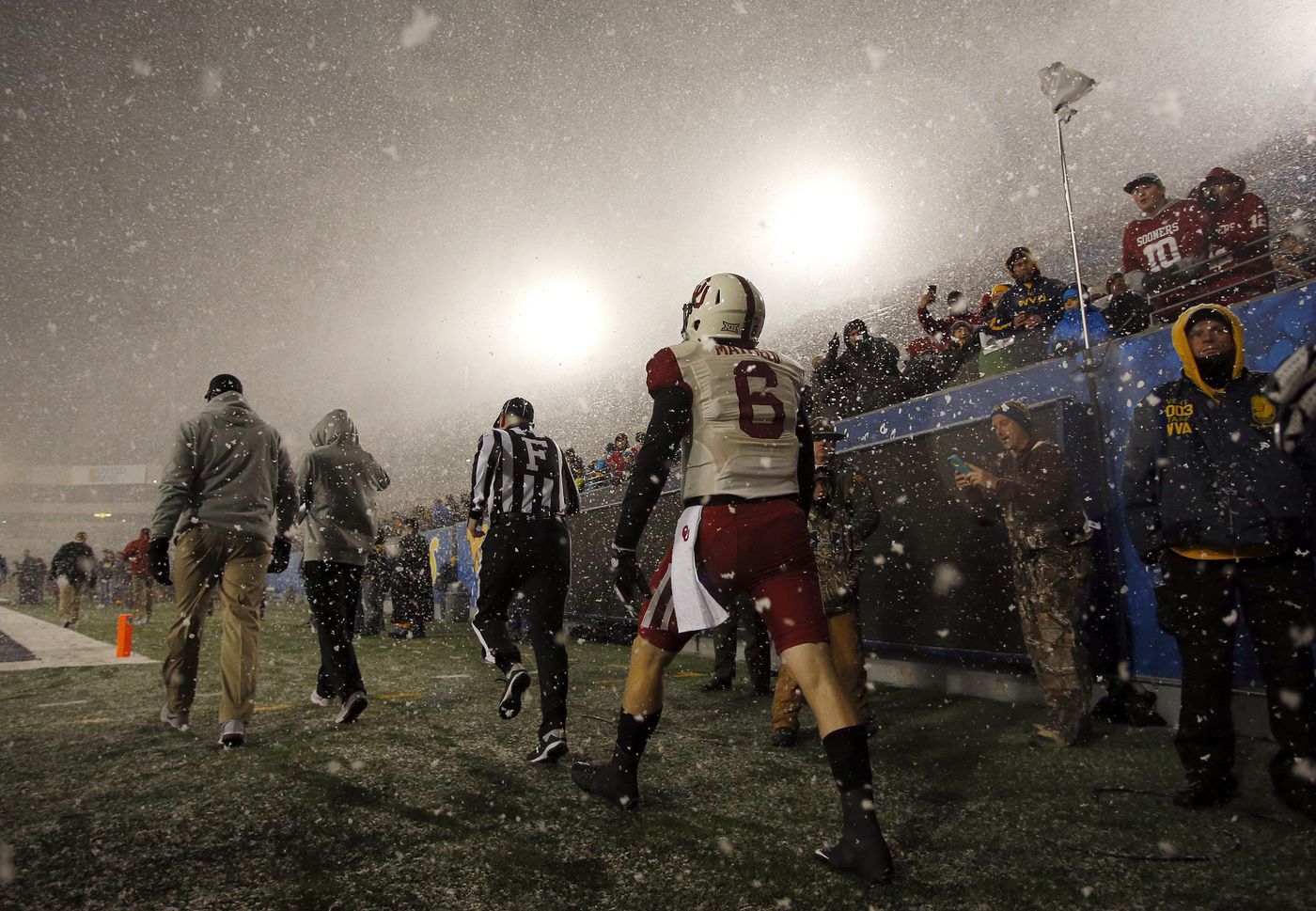 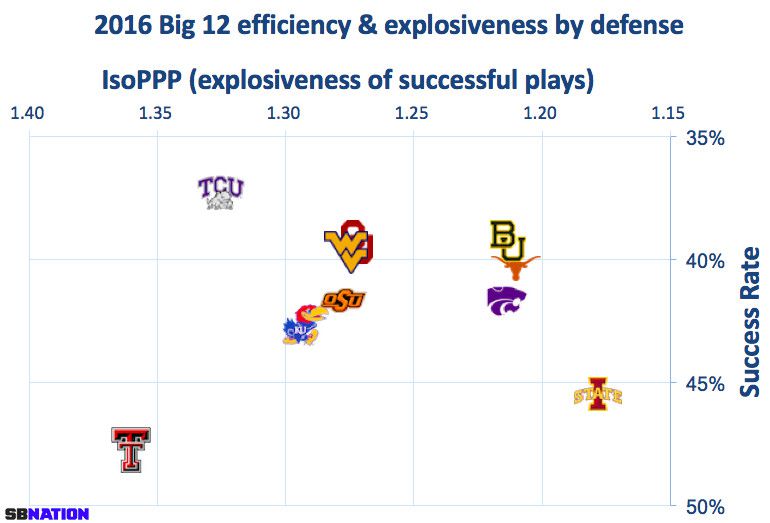 This conference does not have many slam-dunk stars at tackle or cornerback, but appears well set at end, linebacker, and safety.

OK, probably not, but top three at least. 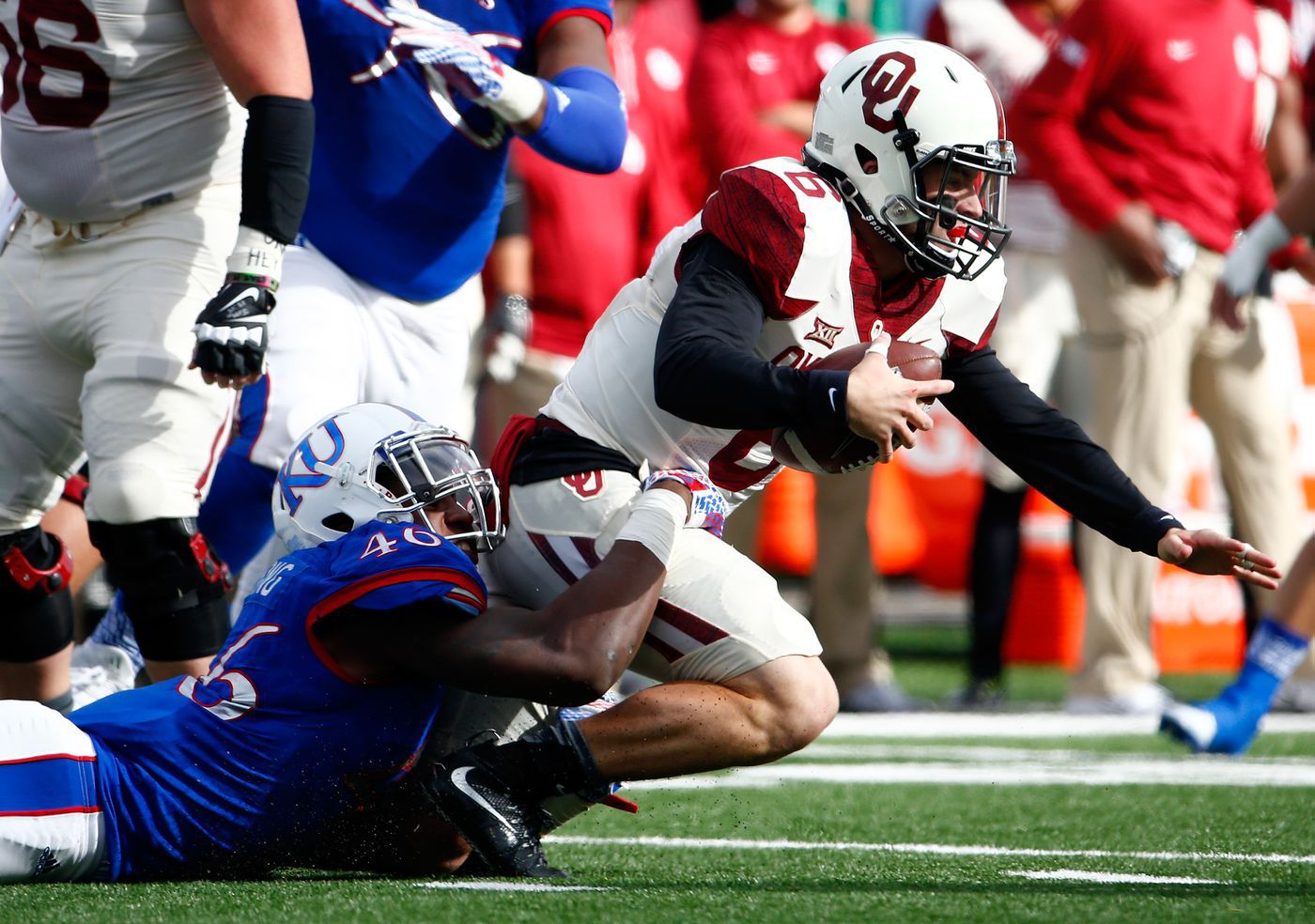