Full 2017 bowl projections, from the College Football Playoff on down 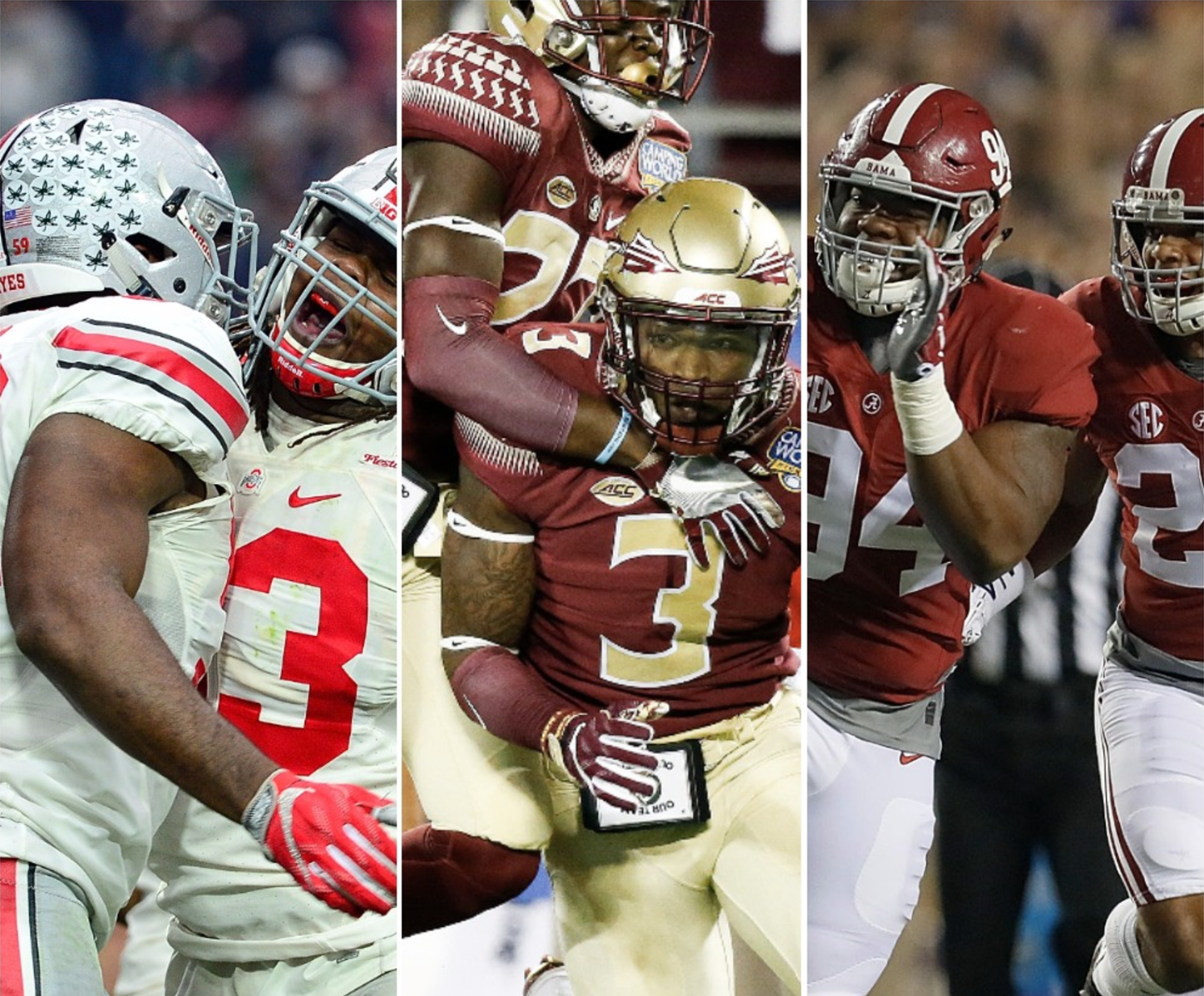 After going through the 2017 college football schedule and picking a winner and loser for every game, then tallying up the results, here are SB Nation’s first full bowl projections for the season. Explanations for most key parts are below.

I think Ohio State is the best pick to win the national title.

Experience, stars, legendary OC Kevin Wilson shoring up the 2016 team’s biggest weakness, and a whole offseason of 31-0 frustration being taken out in the weight room? A path that includes Penn State at home, Oklahoma at home, about a month of gimme games after OU, and no Wisconsin in the regular season?

Bama’s obviously a top-two pick at worst, but I think people are a little too scared by OSU’s failure against Clemson eight months ago.

I have FSU beating Bama in Week 1, then losing the rematch.

The choice for No. 4 came down to USC or Oklahoma.

OU has a likely loss at Ohio State, while USC could be favored in every game. Their strength of schedule will likely end up comparable, however. Bob Stoops’ replacement by Lincoln Riley doesn’t worry me, but with things this close, it’s one more reason to consider USC.

(This is all beside the point. We all know the new Big 12 title game is going to wreck the Big 12, because that’s how Big 12 life goes.)

Only one New Year’s Six bowl is based on conference ties this year.

This is the best Playoff rotation, partly because the Rose and Sugar are the best games, but also because the committee has a little more freedom with the other big games.

From there on out, this is just playing through guesses of what each bowl/conference/school would arrange.

Almost none of these slots are based on conference standings. A few of the mid-major leagues award automatic bids to their conference champs (the MWC champ gets dibs on Vegas, and the C-USA champ gets its pick from among league ties, for example), and some leagues like the ACC have rules that prevent teams from jumping too far out of the standings order, but otherwise, this is more about money than merit.

Most of the power leagues and a few of the mid-majors figure out bids as collectives, rather than letting the bowls draft teams to invite. The Pac-12 is the biggest exception.

I tried to avoid rematches, keep teams somewhat local-ish, and avoid repeat trips, while keeping in mind that bowls usually prefer the bigger, more popular team over the team with a slightly better record. A lot of fiddling happened. Moving one team to a better fit means moving another, and so on.

The trickiest parts, as always, were the Big Ten’s geography, which makes it hard to find fresh California or Florida destinations for teams that’ve been to one or the other often, and the Pac-12’s draft order, which is too rigid and makes it look like a good team is being punished when it ends up in the Sun or Vegas.

Now let’s get ready to update this every week until the real thing.

Angry emails ("IT’S TOO EARLY IN THE SEASON FOR THIS CRAP") will show up, but that’s fine. Bowl season is fun, and looking forward to it is fun.