How Clemson became the national champions of social media 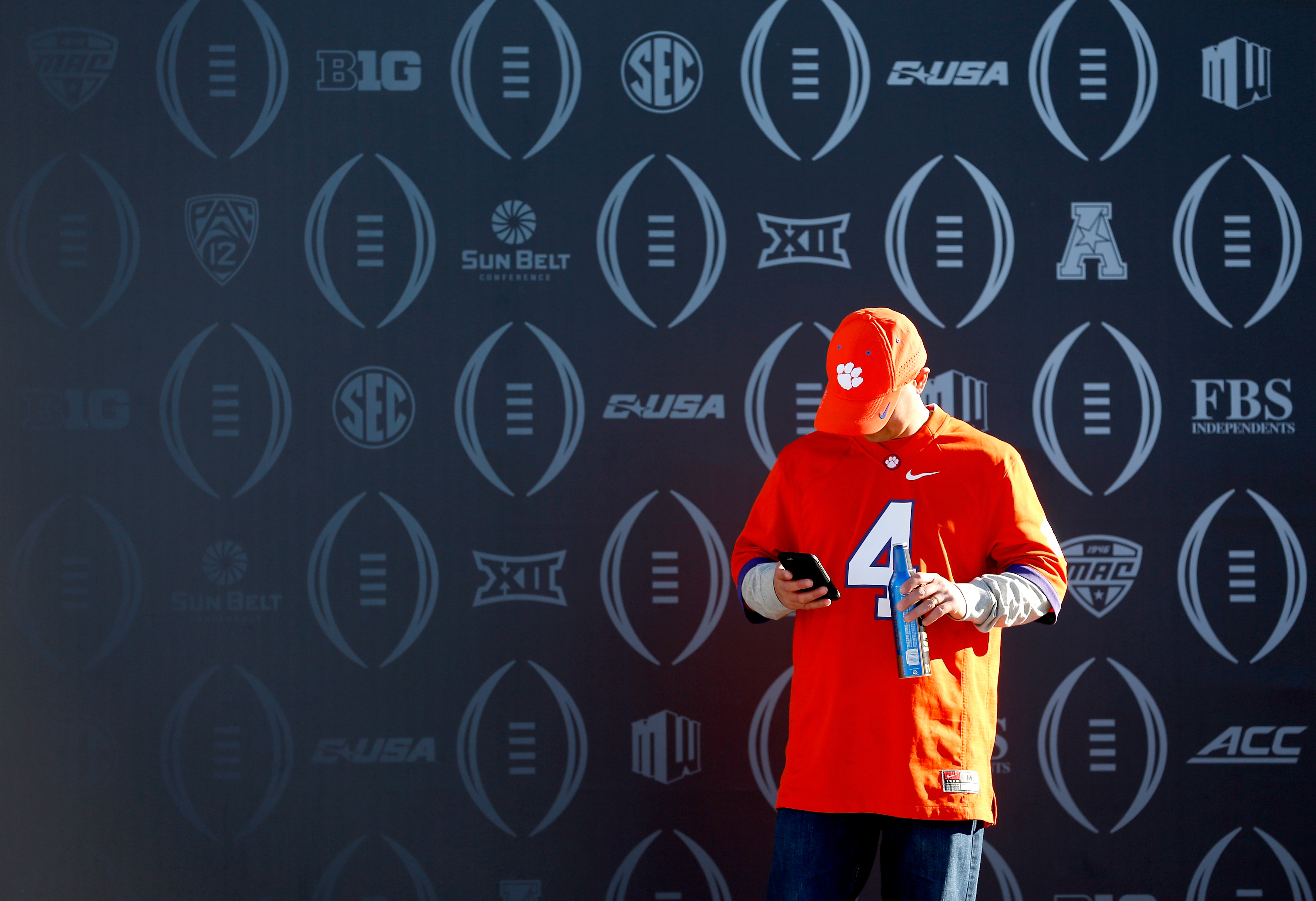 At every school, the football team is supported by other teams, from the strength staff to academic support to the grounds crew.

The newest and most front-facing of these are social media departments. Gantt works alongside an assistant director, 12 to 15 students, and another full-time designer to serve all 19 sports at Clemson.

But they are at their best when it comes to football. Look no further than Clemson’s football Twitter account. Before Gantt’s arrival in 2013, it didn’t rank among college football’s 10 most-followed team accounts. It’s now No. 1. 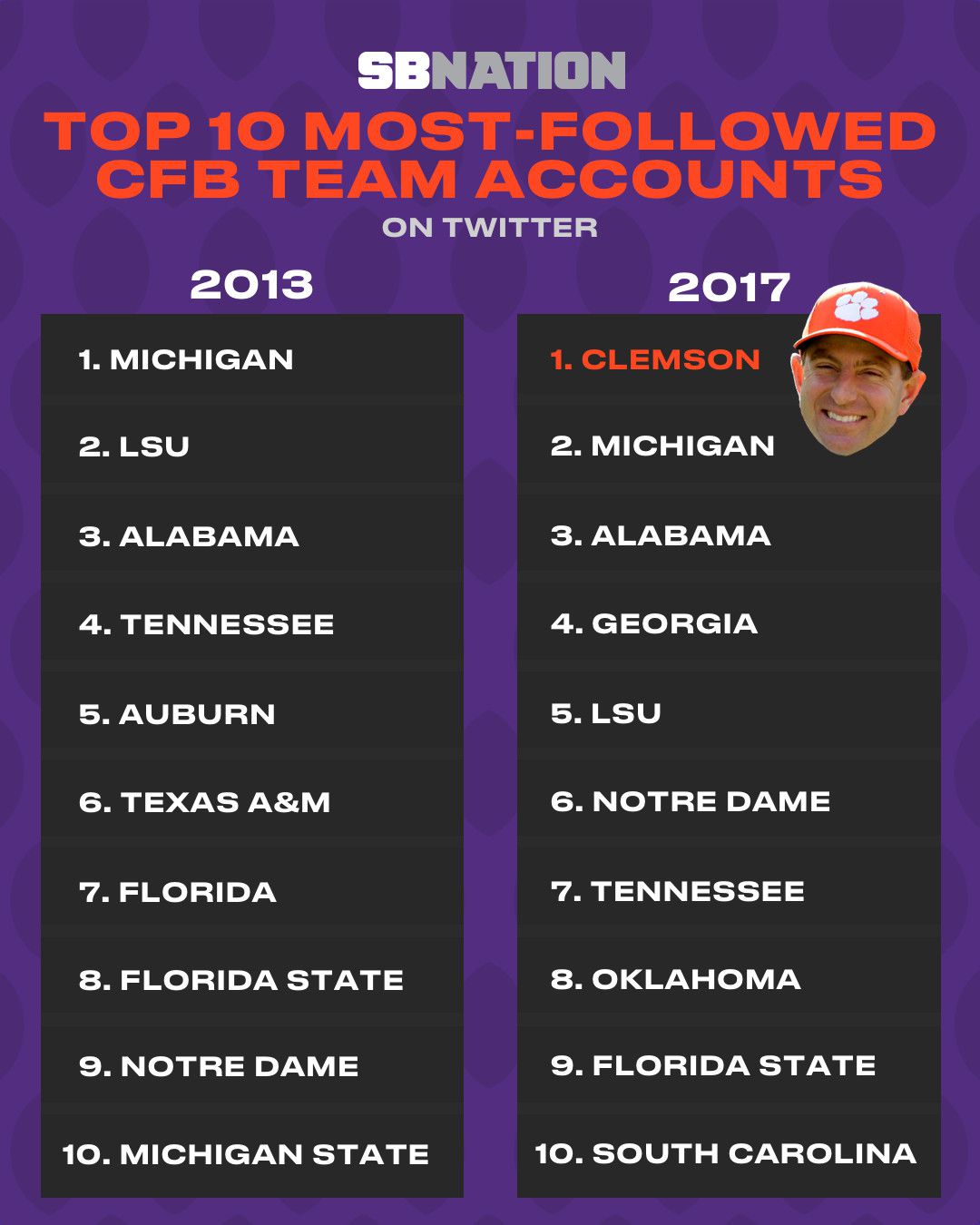 Gantt, who left the Tampa Bay Rays to become Clemson’s first employee with his job title, termed CU’s 2013 social media department as having a "basic presence."

He says he felt things finally click during a relatively meaningless game to start 2015.

From a nooner to open the season against Wofford:

"I have never been more like fulfilled and excited and enthusiastic and happy, career-wise, than I was when I was driving home from the press box that night," Gantt said. "I was so excited that it seemed like everything we had been trying to make happen and pull together, and on that day, everything just clicked."

His folks had become capable of capturing everything surrounding a game day and getting it online.

They were able to show through images that "there’s something in these hills," a nod to a 1969 essay by Joe Sherman.

But it took quite a while to get to that point.

He had to learn the first lesson of college football: recruiting drives the bus.

"I think my original plan — if you could even call it that — it changed pretty drastically after the first six months on the job, after learning how important recruiting was," Gantt said. "After shifting, the strategy that we still have today is to utilize social media to reach recruits and to create content that answers the question: What’s it like to be a Clemson Tiger?"

And there’s a synergy in what they do with the recruiting department, like this mailer that the account also sent out as a graphic, built around a line in the song "Good Dope" in which Future references the Tigers:

Tampa was the site of Clemson’s national title win in January.

"We go into so many high schools for the first time and the head coach will tell us, ‘Man, y’all put out the best videos, the best social media,’" said Jeff Scott, Clemson’s co-offensive coordinator. "When that’s your first meeting with a coach and he already knows that much about you, your staff and your program, that shows where it’s paying off. It absolutely makes a difference."

References to rap music are a way in which they "speak recruit," in other words. You’re hard-pressed to find a Clemson video that isn’t scored by a popular rap song.

The group Migos put out an album called Culture on Jan. 27. Culture would peak at No. 1 on Billboard’s charts.

The Tigers were ready with a graphic, minutes after the album dropped.

"I think that a lot of focus I had early on was talking to student-athletes [already at Clemson]," Gantt said. "Obviously, they’re a lot closer in age and perspective to the recruits that we’re going after, so being able to not just talk to them but actually look at their accounts and see the type of language and tone and ways that they communicated.

"Even stuff — and I still feel silly saying it — but like the emojis they use in their posts," Gantt said.

"That was just kinda trying to fit into that kinda tone and voice. But at the same time, representing a university and a football program."

And with an almost exclusively visual medium like Instagram, emojis can augment scarce words, telling a story with as few words as possible.

Even a simple hashtag, such as the ubiquitous "All In," is thoughtthrough.

It’s a slogan birthed by Dabo Swinney, from the first time he spoke as the Tigers’ head coach back in 2008.

"I try my best to be like a Nike copy writer," Gantt said. "Really concise, really powerful emotional messaging. And Coach Swinney does such a great job of setting us up for that, because he does that in a daily basis, just through his interview conversations, much less when he’s talking to the team and stuff like that."

Swinney is, per Gantt, "a marketer’s dream." The head coach, who talks like a motivational speaker, delivers many of the nuggets that become social media captions. It creates an authenticity any brand craves, an organic and personable interaction with consumers.

Another Dabo-ism, "bring your own guts," has become #BYOG.

While some teams seek to control their message through beat writers employed by the athletic department, Gantt isn’t interested in that.

"We’re not as good as being journalists as journalists are," Gantt said. "In terms of new coverage of a team, we’re not set up that way, in terms of our personnel and the infrastructure that we have. The way we are set up well is more like an advertising agency. Understanding that the target audience, and really all society at this point, everything’s visual. They can comprehend visuals a whole lot faster than they can the written words. So you can express a lot more."

In 2015, after beating Notre Dame in a downpour, Swinney’s dance in his rain gear went viral with over four million loops on Vine the first night, per Gantt:

"That Notre Dame game was literally a hurricane in Clemson that weekend, and my house actually flooded," he said. "The basement of my house flooded. And it woulda been one of the worst weekends of my life, but we won, so it was like kind of OK."

When Vine shut down in late 2016, the Tigers were ready, because they hadn’t hitched their wagon to it. Gantt called it a bummer, but said his department had "a shortform social video strategy." The videos that went on Vine went on Facebook and Instagram and Twitter as well, so it was just the loss of one distribution platform.

Why keep videos short, without Vine’s restrictions to worry about?

"If you look at the viewership rates of our videos, if it’s over six seconds, it plummets, in terms of the completion rate of how many people are watching it," Gantt said. "I think it’s how people consume video content on social, and so that format made a lot of sense, no matter what platform you’re on."

Above all else, it helps that the Tigers are good.

"My goodness, yes," Gantt said. "There’s a lot of people doing great content across the country and across the world, but there’s not a lot of them that have championship teams or that have a personality as a head coach like Coach Swinney."

That content has to "maximize the moment" for Clemson. Gantt says his team did a good job of it for 2015’s title-game loss vs. Alabama and was thus ready for 2016’s sequel.

His team prepared some graphics and skeletons of things like game trailers that can be tough to do on a quick turnaround. But Gantt’s team wasn’t able to think toward the title game before the semifinal ended. That’s because they try to take one game at a time, much like players and coaches, but also because you can’t plan for a game you’re not sure you’re going to play in.

"We really approached it the same way [as we did in 2015]," Gantt said. "And I think the output probably matches up pretty closely from year-to-year in terms of the quantity and the quality. It’s just — we happened to have something more fun to share in the second year."

Each week, the department had released 25-second recaps of each game, with highlights and pregame hype included. For a season recap, they put them all together in one video.

Leading up to the national championship, the department flexed its muscles, whether via a stop-motion GIF ...

They put spotlights on friends and foe. Former Alabama coach Gene Stallings recited a famous poem for Clemson ahead of the game against the Tide ...

... and Clemson sent shoutouts to the fans traveling all over the country.

Gantt has a soft spot for one pregame hashtag.

"Orange Britches is my favorite hashtag that I’ve ever seen, regardless of hashtags, and I’m so excited every year when the opportunity comes around. There’s just nothing — it’s like it’s cool and silly and ridiculous and awesome and great all wrapped into one."

At the kickoff of the National Championship, the social accounts didn’t take a backseat. They just stepped off to the side.

Your cell phone is your second screen. Clemson’s accounts don’t live tweet play-by-play. They go where cameras can’t or portray moments in ways the broadcasters might not. Like this slow-mo look at Clemson’s arm-in-arm pregame walk:

"We know that you can get a way better view of the game by watching ESPN," Gantt said. "They had a record number of cameras, they had broadcasters, we’re not gonna do that better than they do. So we need to focus on, what are the stories? What are the perspectives that maybe they’re not focused on, that we should be focused on, that we can share and supplement what they’re doing in the broadcast?"

So the team’s in-game product remains quality over quantity.

Whether that’s via field videos ...

... or a hype video posted right as the fourth quarter begins ...

... or GIFs to call attention to big highlights.

And when it was over, Gantt’s team was ready to chronicle the euphoria.

With the help of Kanye West, a video highlighted Watson’s championship connection with Hunter Renfrow:

And Yeezy set the tone for an exciting look back at the whole game as well:

So, what’s it like to be a Clemson Tiger?

At any time, you can open your smartphone and have Gantt & Co. attempt to show you.