2017 C-USA football power rankings: Can anyone knock WKU off the hill? 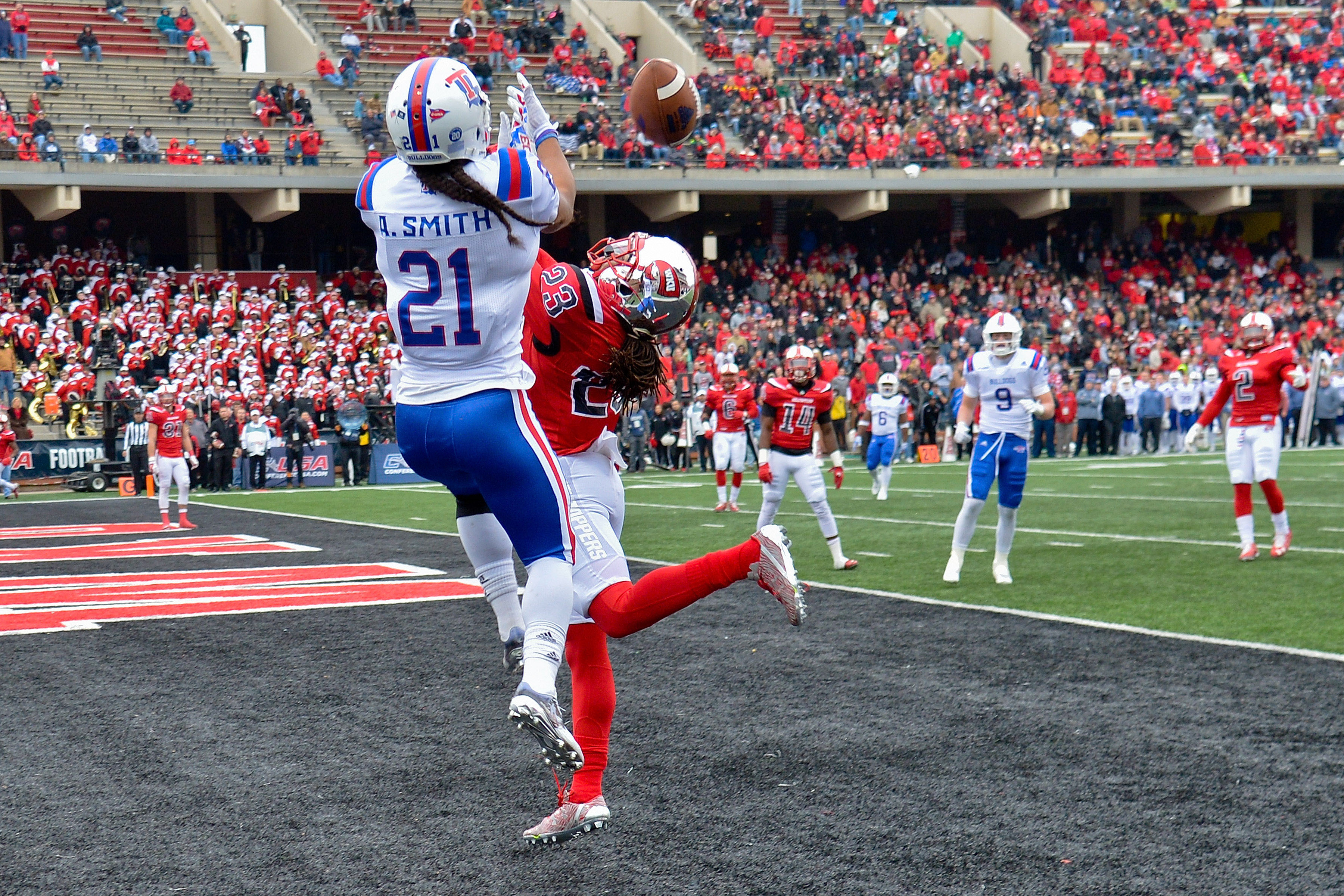 WKU has towered over its peers. Will 2017's changes close the gap?

At the end of 2016, WKU was so far ahead of the rest of C-USA that the Hilltoppers would have been in Tier 1 all by themselves. But the combination of a WKU coaching change and some other teams putting pieces together should make this an exciting race. I think the Hilltoppers still have more than enough to start out on top, but if they falter more than a step or two, they could get caught.

Who will catch them? If you ask the S&P+ analytics, they would say Louisiana Tech and Southern Miss are on equal footing in the No. 2 spot. But I always say these power rankings come down to trust for me, and three straight nine-win seasons have made me trust Tech a bit more than the volatile, fun-as-hell Golden Eagles.

Really, though, this should be a Tier 1 and Tier 1a situation. If WKU falters, it wouldn’t surprise me if either Tech or any of the four teams below stole the crown.

With one of the country’s best QB-WR combos and veteran coaches, this could be MTSU's best team ever.

The Golden Eagles are talented and hard to predict, with chances for big upsets. This is all on brand.

Frank Wilson has improved the Roadrunners on the field, and his recruiting hasn’t even kicked in yet.

ODU improves annually, so what’s next after 2016’s breakthrough?

MTSU might have the two best offensive players in the conference in quarterback Brent Stockstill and receiver Richie James. I have quite a few questions about the Blue Raider defense and run game, but those known quantities up the trust factor.

Lane Kiffin will mean both wins and controversy in Boca Raton.

How the hell did the Herd fall apart so quickly, and when will they bounce back?

The Mean Green belong on your list of C-USA teams with promising new coaches.

Butch Davis is back in Miami and has maybe the country’s most experienced roster.

Consider this the "one year away" batch. Lane Kiffin’s first FAU team might have the best offense in the conference, but the Owls’ defense ranked dead last in Def. S&P+ last year. Another known quantity or two on defense, and I’d have FAU in Tier 2.

North Texas is rising, Marshall should rebound to some degree, and FIU will rise after a year of settling in.

David Bailiff has somehow managed to average 5-7 records for a decade.

This is both a hard place to win and one of college football’s random landmarks.

Just by taking the field, the Blazers have already won. Now to win some games.

Woof. Rice and UTEP have a lot to prove after a couple of dreadful seasons, Charlotte probably won’t start to rise until at least 2018, and while UAB’s Bill Clark has put together talented pieces, it’s hard to set any expectations for a team that has never played together, isn’t it?

Conference USA has had two primary problems over the last few years: no one to seriously challenge the top (Marshall in 2014, WKU in 2015-16) and an awful set of bottom teams. The former will be alleviated in 2017, I think. Not so sure about the latter.

Here’s how my statistical system has the C-USA laid out for 2017, with 0 equating to an average FBS team. (You can find full 2017 S&P+ projections here.) 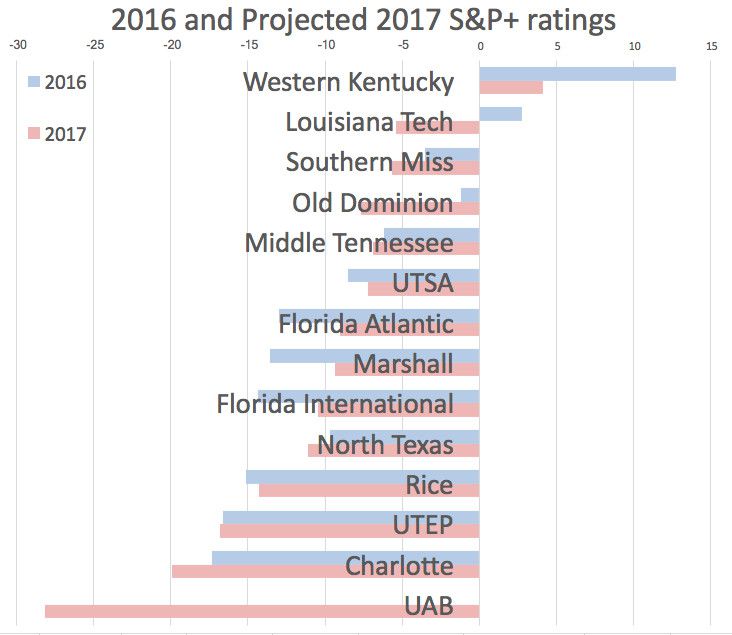 Again, the slate is blank for UAB, and WKU starts out on top. We’ll see if Mike Sanford can steer the Hilltopper ship well.

You can tell a lot of teams are bunched together in the ratings because of the projected win totals. WKU and MTSU are ahead, but four teams are within 0.7 wins of each other.

In the West, three teams are within 0.5 games, and a fourth, North Texas, isn’t out of the conversation. S&P+ sees a blurry conference picture, at least aside from WKU. 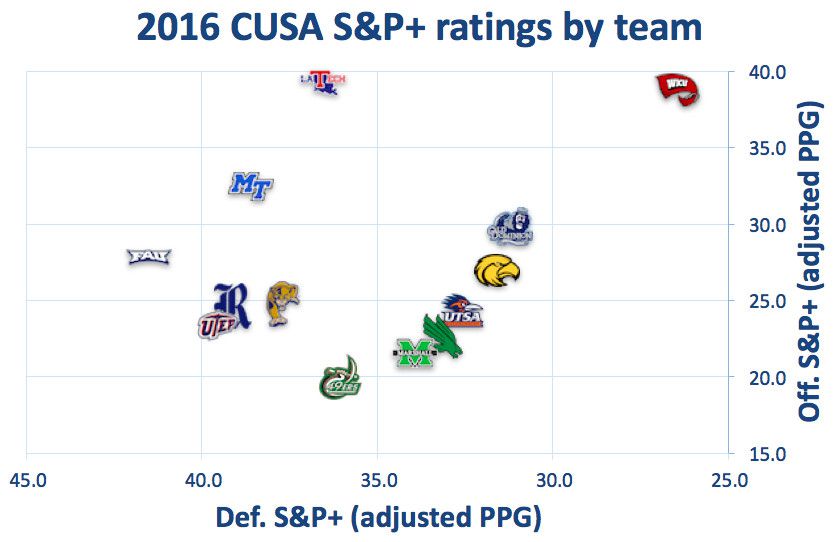 WKU was really far ahead of the pack. Who reels the Toppers in? 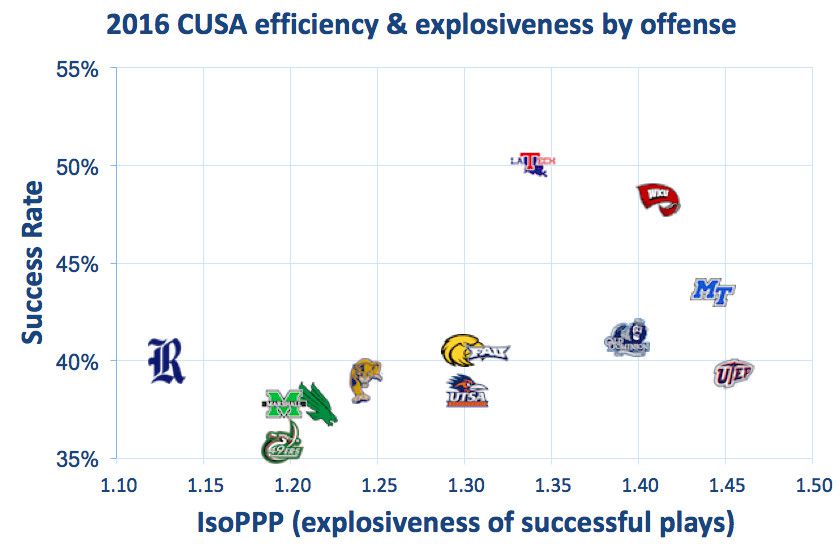 Only a couple of offenses stood out from an efficiency standpoint last year. The best teams in the conference were the ones that could make some big plays.

That’s a lot of running backs.

I struggled to decide between James and Stockstill as MTSU’s representative. Whomever I chose was going to get the Best Overall nod, though FAU’s Singletary could absolutely explode in 2017. 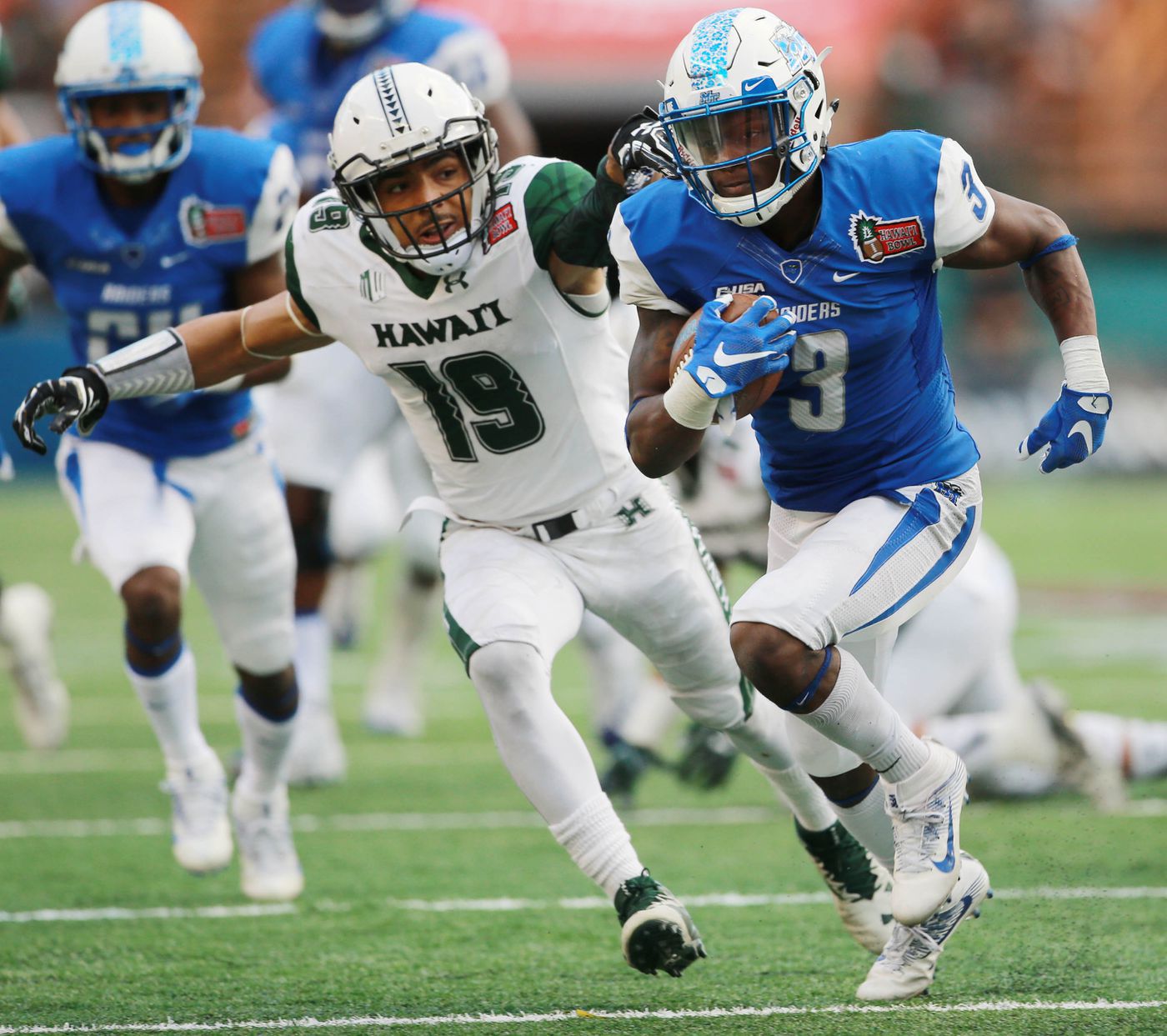 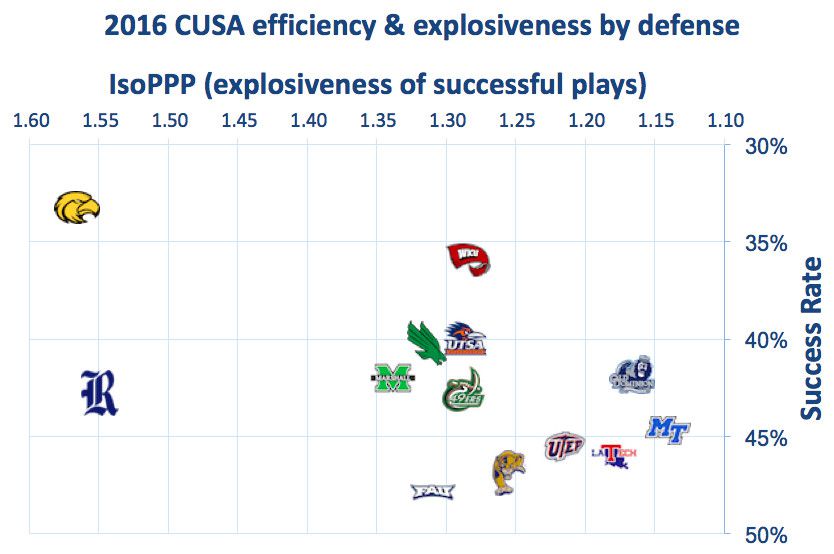 You had more separation on this side than on offense. You had a batch of bend-don’t-break teams (in the bottom right), you had a few in the middle, and then you had two hilarious outliers: Southern Miss (which allowed offenses all or nothing) and Rice (which allowed anything).

Almost every team has a strong end/outside linebacker type, and it was hard to differentiate between Ferguson, Ximines, Davenport, and maybe Johnson. 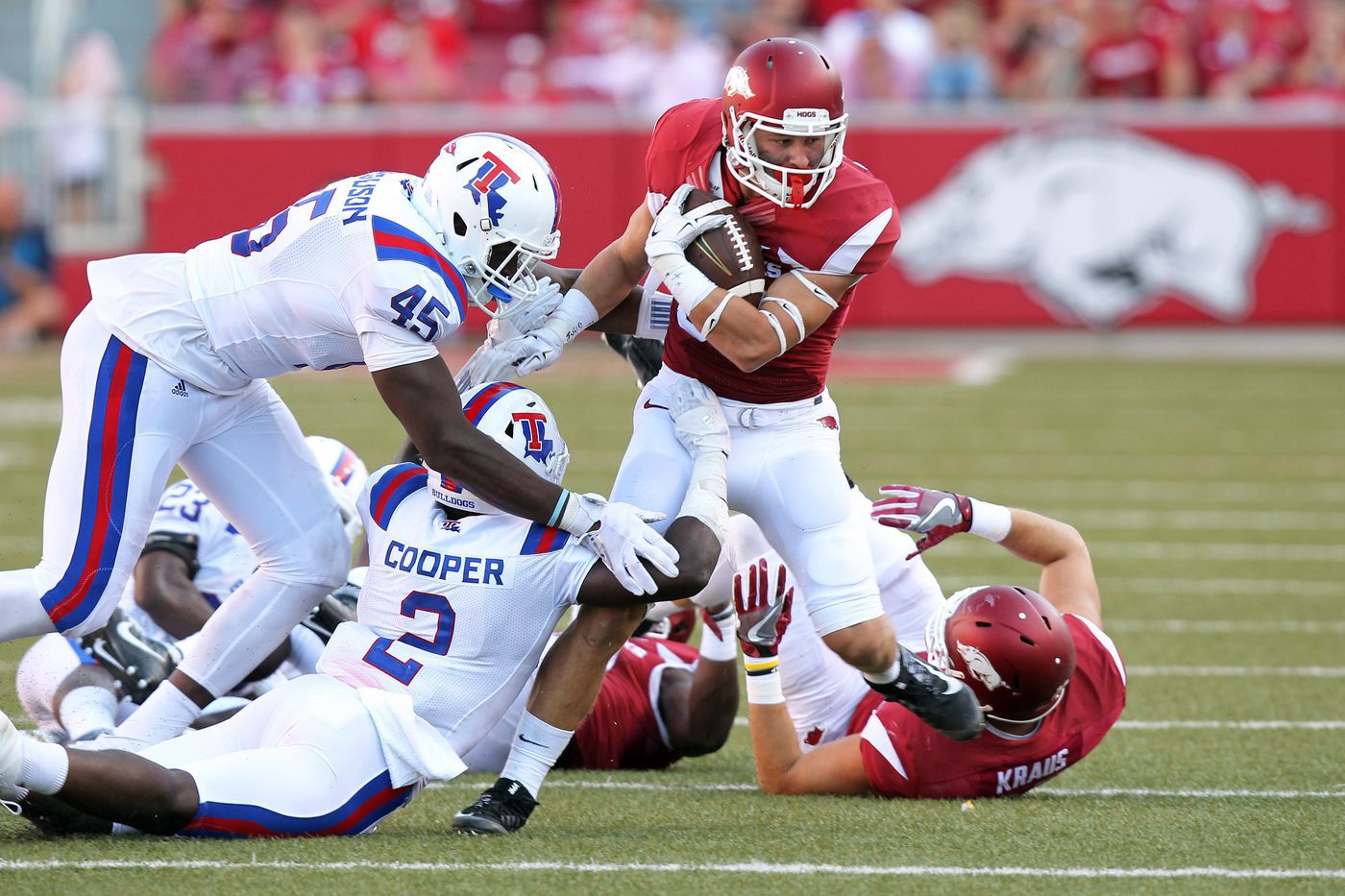