Dino Babers is here to ‘strike fear into defensive coordinators’ 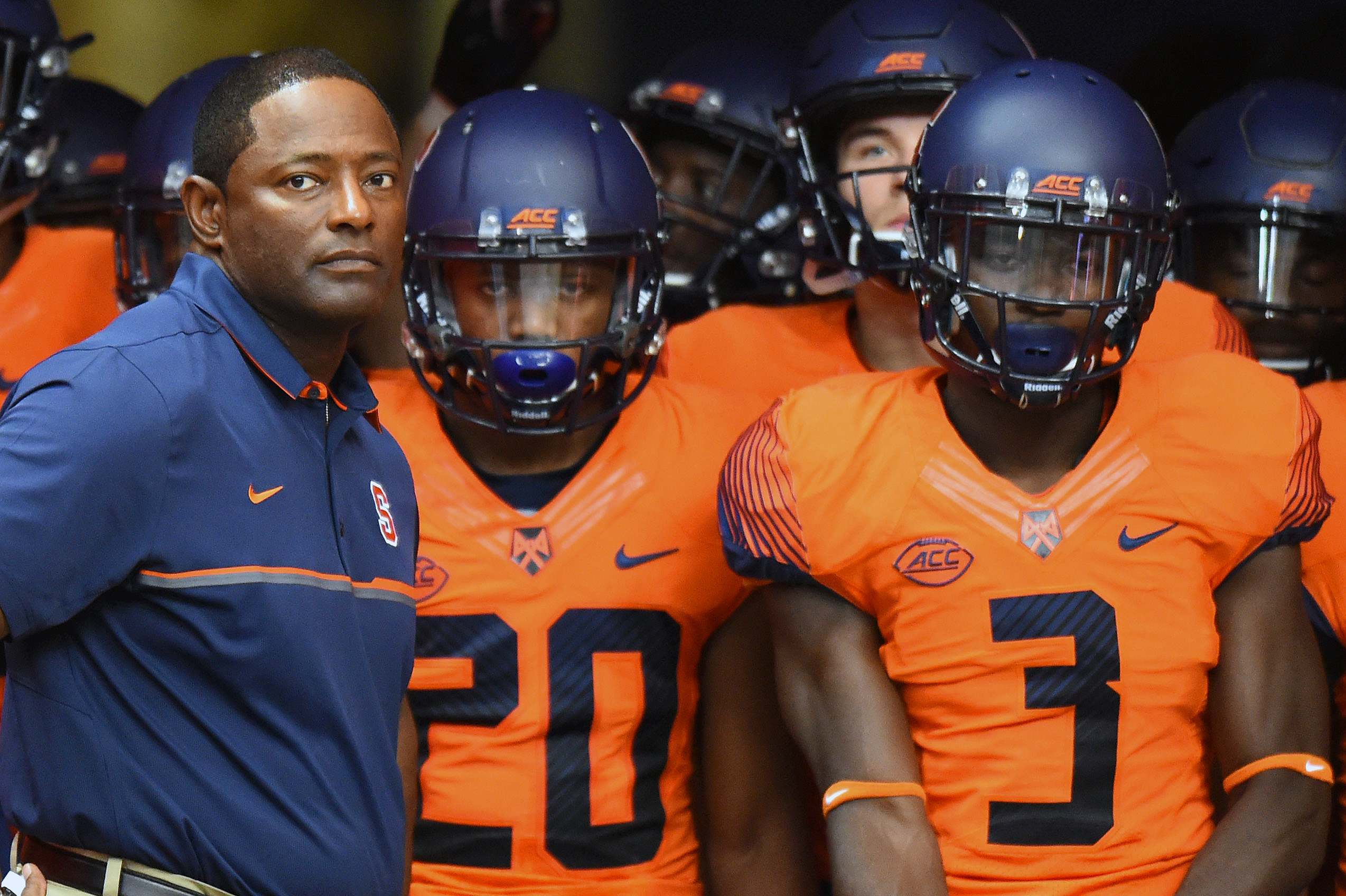 This story was originally published in March.

SYRACUSE, N.Y. — "A., I like movies, but B., it’s a time for me to go out in public, when the lights turn down and no one can see who I am," Syracuse Orange coach Dino Babers told SB Nation.

"And I can actually be like everybody else and just laugh and make a noise in a theater and be normal. Because as soon as the lights go back on, I’ve been a head football coach in smaller towns, and everybody knows who I am, and I’m back on again."

He’s far ahead of his fellow football coaches when it comes to keeping up with pop culture, but movies are about more than that. Movies were his escape as a young man and a constant for the son of a Navy man whose family moved often. Now, trips to the "movie house" are an offseason indulgence.

Dino isn’t a nickname, either; he’s named after the Italian movie star Dino Verde. Not many head coaches see Oscar winners until years later, but Dino’s seen Moonlight. A former wide receivers coach, Babers noticed the in-cut route run by Get Out character Walter, the one that spawned the viral Get Out challenge.

Back when he was a kid, sequels weren’t the backbone of the movie industry that they are now. Babers’ career has twice been propelled by second acts. A 7-5 Eastern Illinois became a 12-2 FCS quarterfinal squad. His 8-6 Bowling Green Falcons went 10-2 the next year, before he left for Syracuse.

The opening of his Syracuse tenure was a 4-8 2016. He admits his offensive system lends itself to leaps in aptitude the second go-around, but it will not be easy in Part II. Our protagonist faces his toughest antagonists yet, with LSU, Miami, Florida State, Louisville, and Clemson on the schedule.

If you’re writing the Babers biopic, your title character is complex.

To play him, perhaps you’d call Denzel Washington (his choice) or Will Smith (whom his wife and daughters think it should be).

You’d have to find someone to channel both old-school and new-school sensibilities. There’s a record player in his office with vinyls under it and music from his home state of Hawaii playing softly. He says he’s selfish with his music, but his players get to choose everything that plays during practices.

Of course, there are two exceptions.

"The first song is ‘Smooth,’ Santana," Babers said. "The last song: ‘I Feel Good,’ James Brown. Every black guy, white guy, pink guy, green guy will learn the words of those songs. Now, in between those two songs, they get to play whatever they want, as long as there’s not cuss words or N-bombs."

Babers does not run his team like a former military brat and says he doesn’t care how long your hair is.

"I want [my team] to be loose," he said. "I want them to be freewheeling, and I want there to be interaction between them and their coaches. Now that being said, there’s a discipline to this game, and that’s where all that stuff kicks in.

"But the discipline — go to a baking analogy — discipline is in the cake. It doesn’t have to be in the icing. All that baking you do — the cake, ‘Oh, what kinda icing you gonna put on there?’ — it doesn’t matter what you put on it if the cake’s no doggone good. You bake the cake."

(Babers can bake, although he doesn’t eat chocolate.)

As you develop the screenplay, you’d have to channel the most theatrical moment of his career so far, the speech after last year’s 31-17 victory over Virginia Tech. Appropriately, it looks ripped from a sports movie.

That moment was close to the vision he’d promised. In his introductory press conference, Babers asked those in attendance — even the media — to close their eyes and envision a team that could win in all three phases and bring a din to the Carrier Dome.

"I think that defensively, that was probably the closest that it came," Babers said in his office about the win. "I would say offensively, I’d probably go more to the Pittsburgh game [a 76-61 loss]. I think [the VT game] was a fabulous defensive game by us. We did some things on offense and we made some plays, but I really believe that game was a defensive win."

Babers has been a product of many systems during a career that goes back to 1984, when he was a graduate assistant at his alma mater, Hawaii. But this system is an air raid variation that can be categorized as the veer and shoot.

"It absolutely strikes fear, in my opinion, into the defensive coordinators the night before the game," he says. 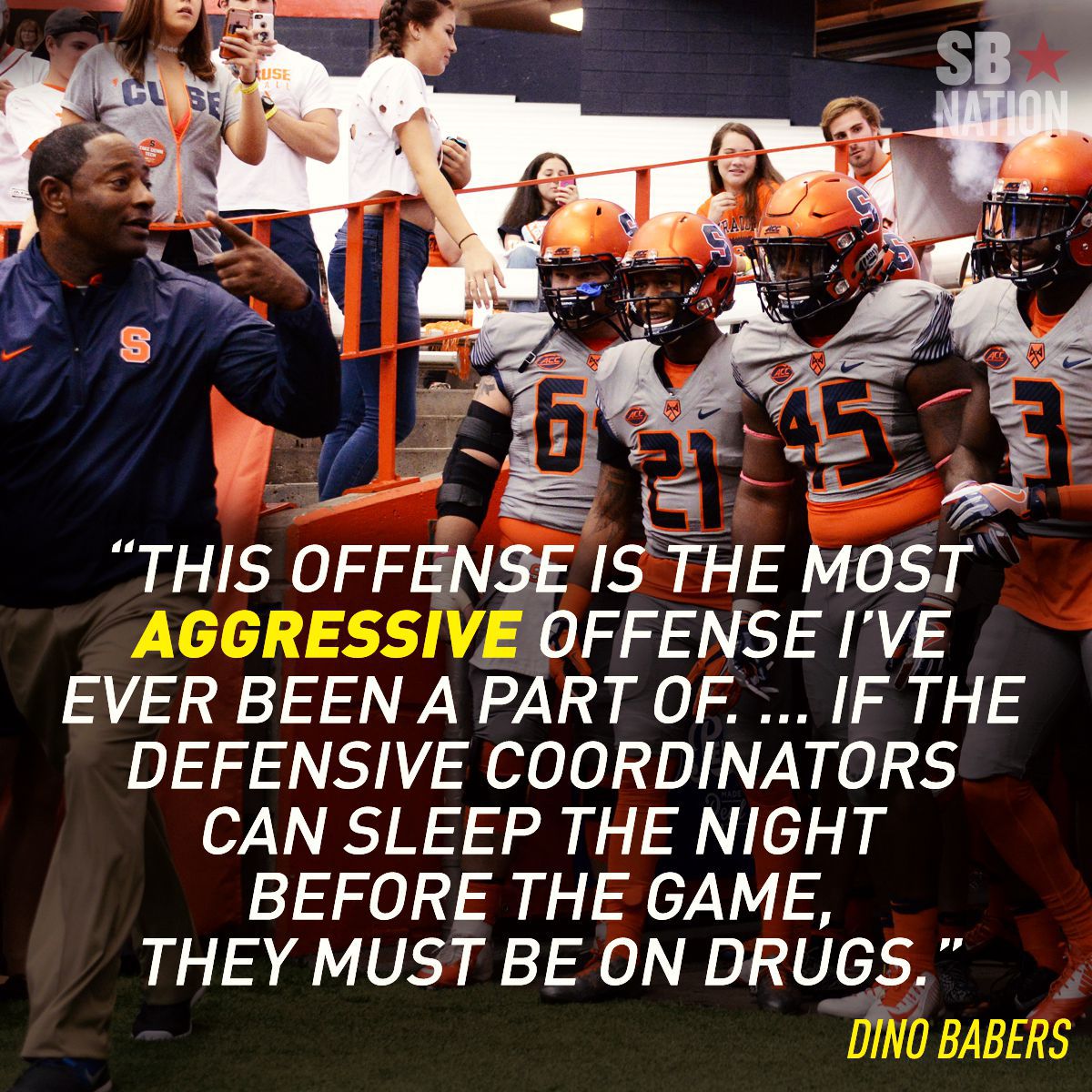 The system was honed at Baylor, where Babers coached wide receivers from 2008 to 2011. It was borne out of necessity when former BU head coach Art Briles was a high school coach during the 1990s in Stephenville, Texas. Briles pushed for Babers to go to Eastern Illinois and told him to bet on himself.

"We’re not big phone guys," Babers said of his contact with Briles. "But we text every blue moon. Recently. I’ll say that."

The events and reporting most frequently associated with the sexual assault scandal that rocked Baylor and resulted in Briles’ 2015 firing occurred mostly after Babers left for Eastern Illinois in December 2011.

Babers was on staff while Tevin Elliot was a member of the Bears. Four months after Babers left, the defensive end was arrested on two counts of sexual assault and removed from the team. He was sentenced in 2014 to 20 years in prison. Baylor was later sued by five women who say Elliot raped them from 2009 to 2012, four of them testifying against him.

When asked about the scandal, Babers said:

"I can talk about from 2008 to 2011, and Tevin Elliot was there. Heard he did bad, heard he got kicked off the team. And I became a head coach. And that’s not, how do I say this? That’s not to cover me. It’s just what happened.

"I’m military. Boom, boom, next. There are certain things that you don’t get second chances for. I got four daughters. I’m down with that."

If you made the Babers biopic, you’d have a ready-made heart-stopping moment.

The car crash nine years ago, on a recruiting trip for Baylor, should have killed him. A tire blew out, and a panicked Babers hit the brakes at 80 miles per hour. His car spun, and he ended up facing oncoming traffic on an interstate near Houston. Babers recalled in detail the face of the semi driver who swerved to miss him.

"I don’t use the word s-c-a-r-e-d anymore either, because I nearly died nine years ago. Since then, I don’t use that word," Babers said.

He was content to stay at Eastern Illinois for 25 years like his predecessor, Bob Spoo, who gave Babers his first full-time job as a running backs coach in 1987. Both started their head coaching careers at Eastern at age 50.

But with experience playing DB in college and so much time as a WR coach, Babers brings a WR’s sensibility to teaching the system he took from Baylor. Despite his background, he’ll tell you the QB is still the most important part.

He calls plays without a sheet, takes calculated risks on fourth downs, and recalls the little things, like the fact that his quarterback got hurt on play No. 14 of the Clemson game. I checked, and he’s right, if you don’t count punts as offensive plays, which many coaches don’t.

"Our quarterback has to be a thrower, not a runner," Babers said. "It’s not a wishbone offense. It’s not Navy’s offense. We do want to run the football, but our quarterbacks need to be NFL quarterbacks. They need to be guys that, after they have a fantastic college career, they go to the pros and they have a pro career."

Under Babers, EIU’s Jimmy Garoppolo threw for over 5,000 yards and 53 touchdowns as a senior against only nine interceptions. He would finish in the top three of FCS’ most meaningful statistical categories and lead the Panthers to FCS’ most prolific offense. Garoppolo now backs up Tom Brady and appears in major NFL trade rumors, with the assumption he could be a franchise QB.

"Now, all that being said, if they do have legs that can get them out of trouble, that’s an advantage. But that’s the No. 1 thing. The No. 1 thing: has to be able to touch the entire football field; 53 and a third wide, 120 yards long. They’ve got to be able touch it all."

Since Babers’ relocation to New York, he’s been able to see Broadway shows for the first time.

He wanted to see Hamilton last offseason, but there was a problem: his whole family wanted to go, too.

"They were so fricking expensive," Babers said. "This was like in the last two weeks of the original cast before they were about to close down. I’m like, the heck? One I mighta saw, me, but they were all like, ‘We wanna go.’ We’re talkin’ about six big ones. I’m like, ‘oh heck no.’ Because I know it’s supposed to be good, but to me the best Broadway show is West Side Story, which is my favorite movie. So I’m like, I’m not gonna go see this Hamilton thing."

Tickets for that performance were going anywhere from $5-$20,000 each on the resale market, but he did enjoy the cast’s parody of Garoppolo.

Babers did see The Lion King and Jersey Boys with his family. In the latter, he saw the future of his program.

"The thing that cracked me up was the opening line of Jersey Boys. Now I’m sitting here, first and second Broadway show, never been to one live," Babers said, "and in the Jersey Boys, the opening line says — they’re singing — but the first time the guy talks, he goes, ‘Hi, my name’s Tommy DeVito, and I put New Jersey on the map.’"

Babers was recruiting a young quarterback by the same name from the same state.

"And I’m sitting there going, ‘Are you sending me a message?’"

DeVito ended up signing with the Orange, an Elite 11 participant and the No. 15 pro-style QB in his class, per the 247Sports Composite. He’ll arrive in the summer.

For now, Eric Dungey leads the team through spring. Dungey ran Syracuse’s option system in 2015, then shifted to Babers’ system and improved his completion percentage while more than doubling his pass attempts.

Babers told his future QB to go see Jersey Boys. He’s not sure if that’s happened yet, but they can see it together later this offseason.