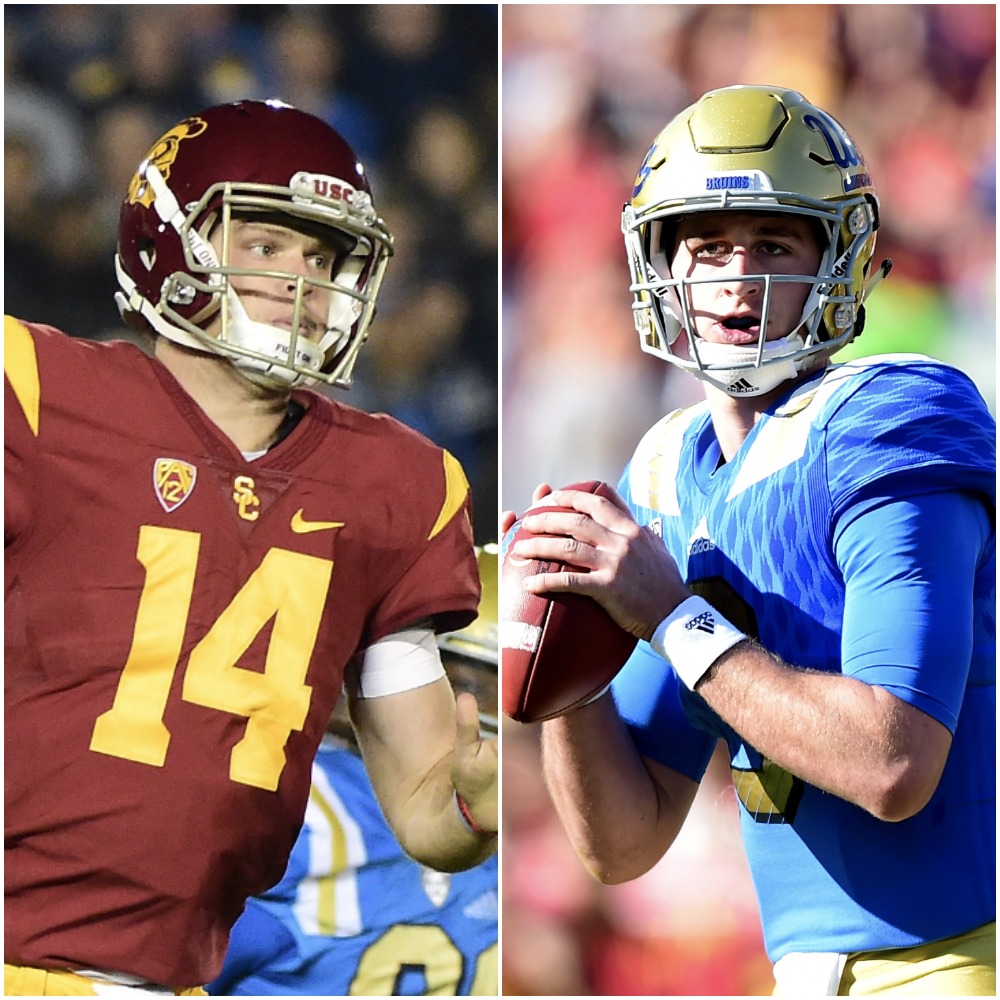 In 1988, the narrative focused on Los Angeles. After UCLA whipped No. 2 Nebraska by 13 and USC throttled No. 3 Oklahoma by 16, the Bruins and Trojans were on a collision course. Only a slip-up by UCLA at home to Washington State (coached by Dennis Erickson, who would take the Miami job) kept USC-UCLA from being a battle of unbeatens.

UCLA was led by Oklahoma transfer Troy Aikman, who won the Davey O’Brien Award and would be the first pick in the NFL draft. USC’s star QB was Rodney Peete, who won the Johnny Unitas Golden Arm Award and would have a long NFL career. Peete and Aikman finished second and third in Heisman voting, beaten out by Barry Sanders.

Almost three decades later, we might be treated to a USC-UCLA repeat.

USC will be preseason top five, thanks in no small part to Sam Darnold, who ended 2016 on fire and is on every preseason All-America list. If USC can replace its top two receivers and three offensive linemen, the Trojans will contend.

UCLA’s Josh Rosen is also one of the best. He was a five-star recruit who performed well as a freshman and saw his 2016 derailed by injuries and a poor coordinator hire. The Bruins need to find their running game, but USC and UCLA could meet with a Heisman, division title, playoff implications, and the draft at stake.

Are there other instances of two arch-rivals having QBs considered elites by either the NFL or by the rest of college football?

Let’s start with 1980 and find some examples.

Before becoming an athletic director and member of the Playoff committee, Luck was an outstanding QB. He was as a second round pick of the Oilers.

Marino had a somewhat more successful NFL career, throwing for over 61,000 yards and 420 touchdowns.

Both regressed in their senior seasons, with Marino dropping from 6.8 adjusted yards per attempt to 4.6, while Luck dropped from 6.7 to 5.3. Their biggest meeting came during Luck’s senior swoon and Marino’s junior surge. 4-0 Pitt beat 4-0 West Virginia, 17-0. Marino was hurt, so Jackie Sherrill deployed a game plan that he described as “the most conservative I have ever played.”

Luck’s son would have more success in rivalry games.

Marino faced another arch-rival (apologies to Penn State fans and their views on whether Pitt is a rival) in a critical game.

No. 2 Penn State hosted No. 5 Pitt. Both QBs would finish in the top 10 of Heisman voting. Both would be first-rounders. Marino had missed a national title in 1981 because of a loss to Penn State, so 1982 was a chance at revenge.

The same thing would happen in 1982. Pitt’s defense played much better and the Panthers had a 7-3 lead at halftime, but were outscored 16-3 in the second half. It was the ‘80s, so a battle between two of the best quarterbacks in the country could produce only 29 combined points and one touchdown pass. Penn State moved on to the Sugar Bowl, where they would win Joe Paterno his first title.

Neither is remembered as a great college QB, but this is interesting for two reasons.

First, both would be first-rounders, with Marinovich going 24th to the Raiders (the next quarterback, nine picks later: Brett Favre) and Maddox going 25th the next year to the Broncos.

Second, the 1990 game was one of the most exciting in the history of the rivalry. USC won, 45-42, with the lead changing twice in the last two minutes. Enjoy Keith Jackson calling a crazy ending in a season full of crazy results.

USC didn’t go to the Rose Bowl in 1990 because Brunell and Washington had clinched a berth.

After being hurt for much of the Huskies’ title run in 1991 and ceding the reins to Billy Joe Hobert, Brunell returned in 1992. Washington had clinched a third straight Rose Bowl when the Huskies went to play Washington State.

Bledsoe would be the first draft pick, throwing for over 7,000 yards in college and over 44,000 in the NFL. Brunell would be a fifth-round pick and throw for over 32,000 in the NFL. (For good measure, Hobert was a third-rounder and started 17 games in the NFL.)

With roughly 80,000 future yards of NFL talent behind center, the teams combined for 65 points in a snowstorm. The most memorable play of Washington State’s 42-23 win was Bledsoe completing a touchdown that ended in a snow pile.

One QB’s NFL career line would be 5-of-16 for 41 yards, and another took up pro basketball. Still, it’s impossible to ignore a game between Heisman winners.

Torretta is viewed as one of the weakest Heisman winners in history; Ward became a great college quarterback, after Brad Scott conceived of the Fast Break offense.

The ‘92 game would be remembered for a lot of reasons, but QB play was not one. Marvin Jones showed no respect for Larry Jones in one of the great hits in football history (and one that would still be legal today):

It was also memorable for Dan Mowrey etching his name into Wide Right lore by missing a 39-yard field goal at the end.

OK, Kentucky-Tennessee is never going to be on lists of the best rivalries in college football, but they play for a trophy, and UK fans view it as a rivalry.

In 1997, each was led by a quarterback who would go No. 1. (Couch would have a typical career for a quarterback drafted by the Browns.) That’s only happened two other times: 1985 Oklahoma-Miami (Aikman vs. Vinny Testaverde) and 1954 Stanford-Oregon (Bobby Garrett vs. George Shaw).

The game went how you would expect when two great college QBs, one coached by David Cutcliffe and the other by Hal Mumme, meet. The teams combined for 90 points and 999 yards in a 59-31 win for the Vols.

The West Coast has been blessed with great quarterback rivalries. The best might have been when future first-rounders Rodgers and Leinart finished first and second in the Pac-10 in completion percentage, yards per attempt, adjusted yards per attempt, and passer rating. Their teams went unbeaten against the rest of college football during the regular season. A spot in the title game was decided when USC beat Cal, 23-17.

Rodgers’ performance is one of the most underrated ever. Against what proved to be the best defense in the country, one that would hold Oklahoma’s epic offense to 19 points in the BCS Championship, Rodgers didn’t throw an incompletion for the first 51 minutes. He hit his first 23 passes. And in the end, USC’s defense stopped him inside the 10.

Again, Leinart competed against a top college QB in a game that decided a spot in the title game. Again, the QBs combined for good numbers: 565 yards passing.

And while Leinart needed a little help on his last offensive play, his fourth-down throw to Dwayne Jarrett to keep USC alive was a thing of beauty.

Tebow won a Heisman in 2007, a title in 2008, and 12 games in 2009. He was a first-round pick of the Broncos, where he made the playoffs in his first season and disappeared into a yaw of media overreaction.

Stafford started for Georgia as a freshman, led his team to a No. 2 ranking as a sophomore, and played well enough during a disappointing, 9-3 junior season to be the top pick.

The year 2007 started with the world’s most inclusive first-quarter touchdown celebration and ended with Georgia winning, 42-30.

In 2008 was a Florida blowout that ended with Urban Meyer getting vengeance by calling timeouts to rub salt in Georgia’s wounds.

Bradford won the Heisman in 2008, leading one of the most productive offenses in history. After an injury-marred 2009, he was the first pick, after which he has had ... an injury-marred NFL career.

McCoy finished second in Heisman voting in 2008 and third in 2009, and was a third-round pick of the Browns, leaving him to the same fate as Couch and Quinn.

In 2008’s meeting, they combined for 664 yards and six touchdowns. Bradford threw for five of the touchdowns, but his team lost when Texas scored 25 of the final 32 points.

Texas fans, annoyed by Oklahoma getting the tie-breaker in a three-way Big 12 South tie (and thus a path to the national title game), paid for a banner with the score of the game to fly over Bedlam that November.

McCoy would have to wait a year to play in the title game, when his participation lasted less than a quarter because of a shoulder injury.

Right after Darnold and Rosen in Kadar’s draft list is Rudolph, whose team comes into 2017 with high expectations.

Mayfield is not high in projections, because of his size, but has the more impressive college resume, having finished fourth and third in the Heisman voting. Mayfield is seventh in NCAA history in career passer efficiency and yards per attempt.

They also met in 2015 and 2016, with Mayfield’s team winning both comfortably.

So one of the running themes of 2017 could be quarterback rivalries.