Kevin Wilson was one of the best OCs ever. Here’s how he’ll change Ohio State 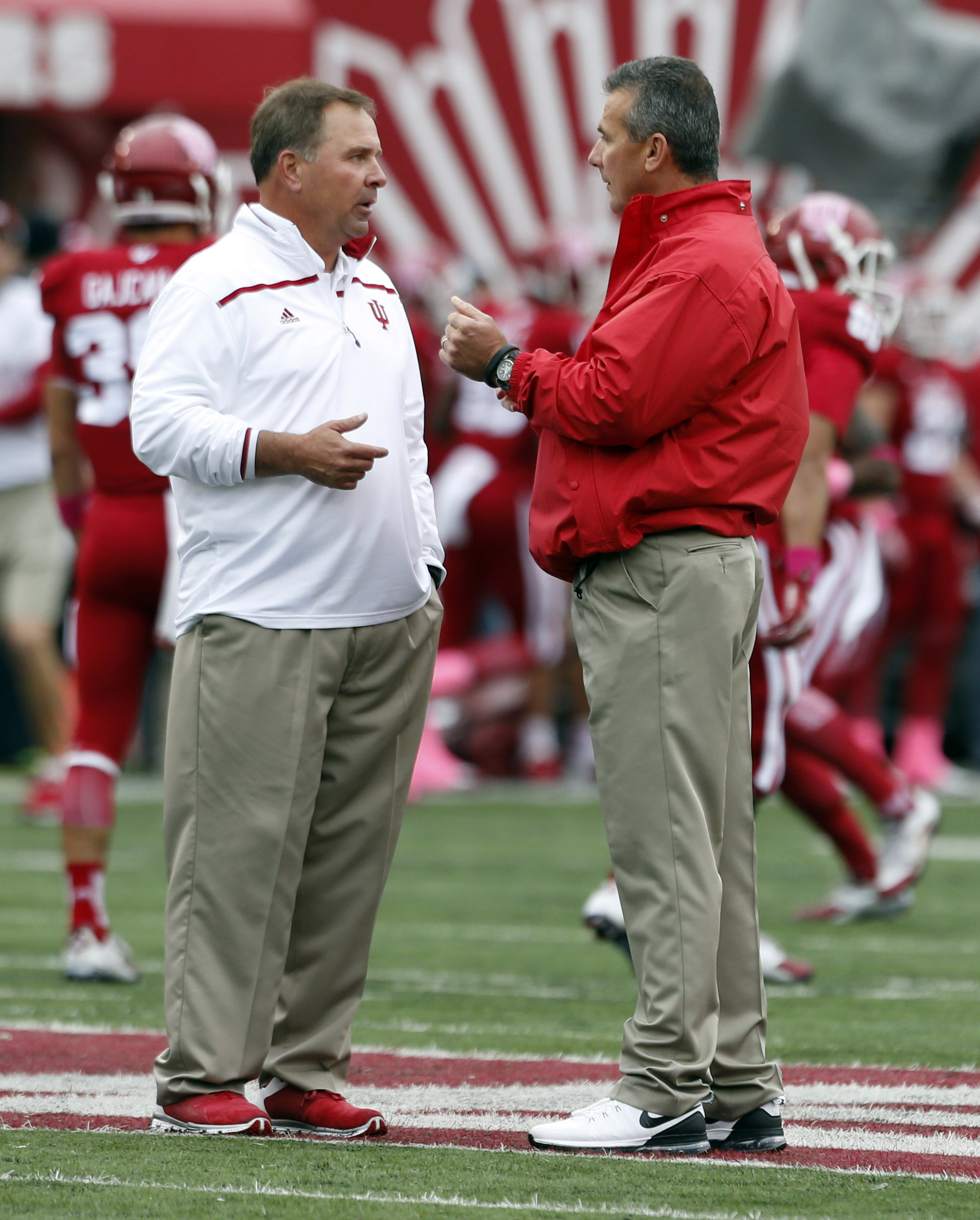 Before Kevin Wilson’s time as the head coach at Indiana, his reputation was built on two major achievements.

The first was coordinating a spread offense at Northwestern that ran over Michigan’s defense and caught the attention of coaches and media everywhere. The next was coaching the legendary 2008 Oklahoma offense that changed the way everyone saw tempo.

Wilson’s Hoosiers struggled without a defense to match his offenses, and when they finally brought in Tom Allen to fix that side, Wilson was then pushed out due to controversies over player safety. Urban Meyer took advantage of his availability to bring him in to reform the recently shut-out Buckeyes.

The 2016 Ohio State Buckeyes were more of a defensive team that relied on running the ball with J.T. Barrett. That mostly worked until they played Clemson, which paired elite defense with an explosive offense.

Now it seems they’re about to change how they practice, with ramped-up tempo. That’s a different approach to spread offense than what Ohio State has featured.

Even more important, though, could be Wilson’s much more balanced approach.

The 2016 Hoosiers tended to distribute the ball differently than did the Buckeyes. Ranking by attempts gives us this: 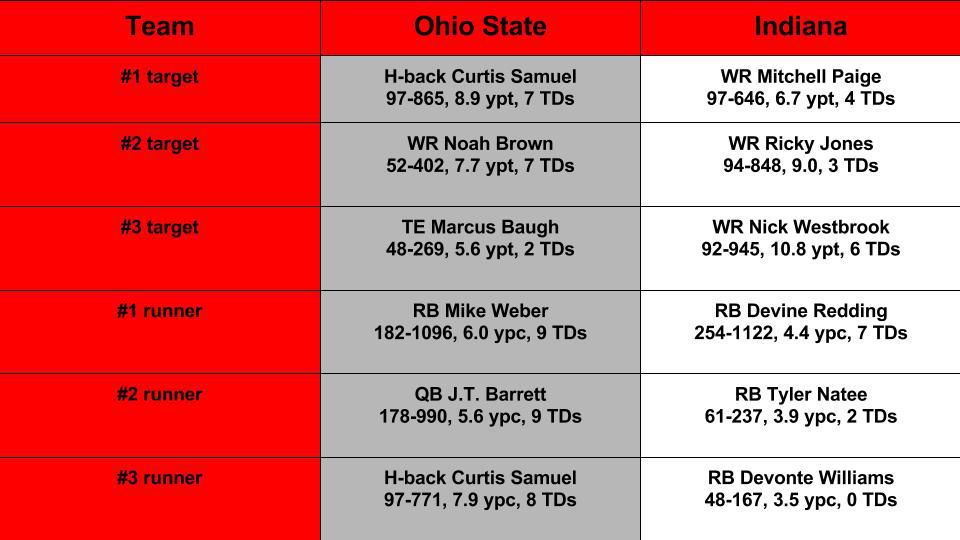 The top five skill players for Ohio State touched the ball on 654 of the team’s 992 plays, with the QB also heavily involved in both the run and pass.

Ohio State’s offense was good at getting the ball to hybrid back Samuel, who had 194 total touches for 1,636 yards and 15 TDs. It was less effective at involving receivers, and four of Noah Brown’s seven TDs came in a single game against Oklahoma.

Indiana put three different receivers over the 90-target mark while still feeding lead back Devine Redding. The smaller program didn’t have a better offense than Ohio State’s group of blue-chips, but it did get a lot of actors involved.

Wilson’s 2008 Sooners were an example of how this can play out with a more talented cast. Their two main backs, Chris Brown and DeMarco Murray, each went for over 1,000 rushing yards while four different receivers caught at least 40 balls and had more than 680 receiving yards.

Wilson balances the run and the pass from the same formation.

Whereas the Buckeyes tended to change formations and personnel groupings to suit the play in 2016, Wilson’s offenses usually line up in standard sets and then run or pass based on how the defense responds to the formation.

The Buckeyes would pack things in and run option tactics for multiple plays in a row, then spread out into an empty set to throw. They’ve defined balance as the ability to do either with excellence.

Wilson’s offenses usually stay in 11 personnel sets (three WRs and a tight end) in either a single-back set with a TE or a two-back set with an H-back. They will use multiple formations, but the offense is designed around balance in every formation. 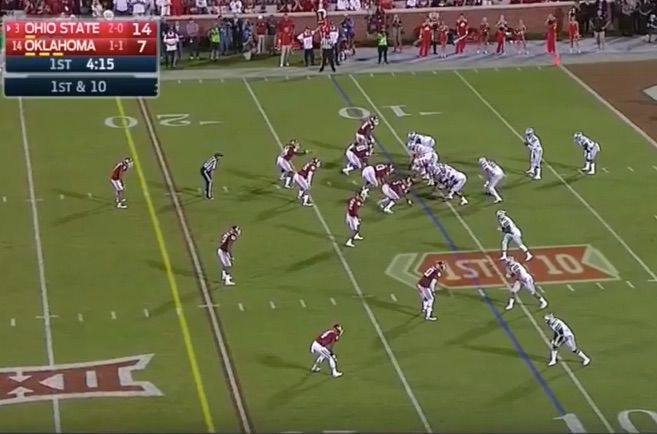 The slot WR on the line of scrimmage (second WR from the bottom) is ineligible to catch a pass (because the bottom WR is on the line; here’s more on that rule). This is a formation you run the ball out of, and OSU’s willingness to cancel out one of its WRs makes that fairly transparent, but the unbalanced design can make it hard for defenses to handle the run concepts. Oklahoma struggled all night with this set.

Indiana, on the other hand, tended to rely on normal spread formations, execution, and attacking the appropriate part of the field. 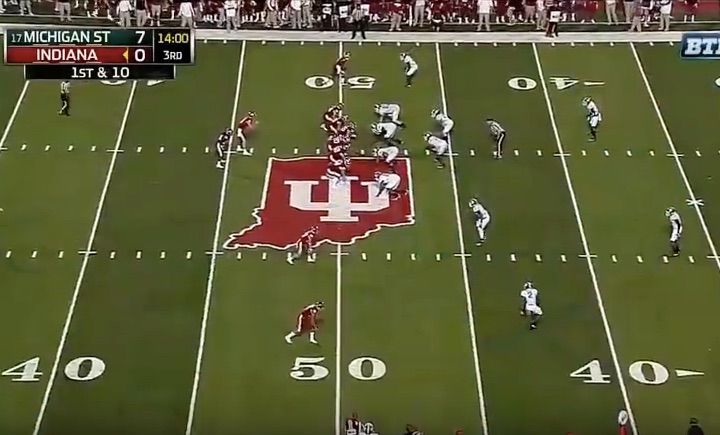 Here’s a standard trips (three pass-catchers to one side) formation, counting a TE to help block for runs. Michigan State sent a six-man zone blitz, but protection held up well enough for the QB hit the deep comeback route that is the achilles heel of the Spartan defense.

Simplicity and balance at high tempo are the Wilson game.

If you geared up to stop the 2016 Buckeye run, they might spread you out with a different formation and fling it. Wilson might respond with one of Wilson’s well-designed screens.

Many Big 12 fans still have visions of Sam Bradford hitting Murray or Ryan Broyles on one of those screens behind a wall of massive linemen. Perhaps Big Ten fans have become familiar as well, after Wilson’s time at Indiana.

Just imagine that executed for a blue-chip Buckeye WR, with future NFL linemen advancing into open grass to lead block, and you can see why this would be a nice complement to the existing Meyer offense. Ohio State does have screens, but they’ve never been as devastating as Wilson’s. Meyer prefers to use the QB option game, rather than screens or play-action, as a constraint (a play that prevents the defense from loading up to stop the offense’s basics).

The advantage of pace for a team like Ohio State: Forcing your less-talented opponent to out-execute you as many times as possible.

When you combine that with spread spacing, you raise the stakes for every outcome and can double down every time you out-execute the defense.

This is particularly relevant along the line, where a team like Ohio State should have the kind of athlete most teams can’t find, although this is frustrated by the difficulty in evaluating high school OL.

The Buckeyes weren’t particularly great along the OL last season, and when starting left guard Michael Jordan went down against Clemson, they unraveled in a hurry against an athletic front. They’ll be returning everyone, save for center Pat Elflein, and redshirt senior guard Billy Price is sliding over to fill that vacancy.

The Ohio State run game has been geared around inside zone and power blocking. Wilson tended to build his Indiana units around outside zone, which works rather differently and doesn’t feature the same kinds of QB option complements. While Wilson might emphasize balanced formations and the pass, it’s unlikely Meyer would stop combining inside zone and power, particularly the QB read varieties with Barrett entering his final season.

This is where the marriage between Meyer and Wilson might be made or broken.

While Wilson is used to calling plays at tempo and distributing widely, how will he do so with the zone/power-read schemes that have defined Ohio State?

If Wilson can adapt to Meyer’s system while bringing a more effective passing attack, this could be a devastating combination for 2017 and beyond.

If not, they might have to re-orient, perhaps building around whichever young blue-chip wins the QB job in 2018.