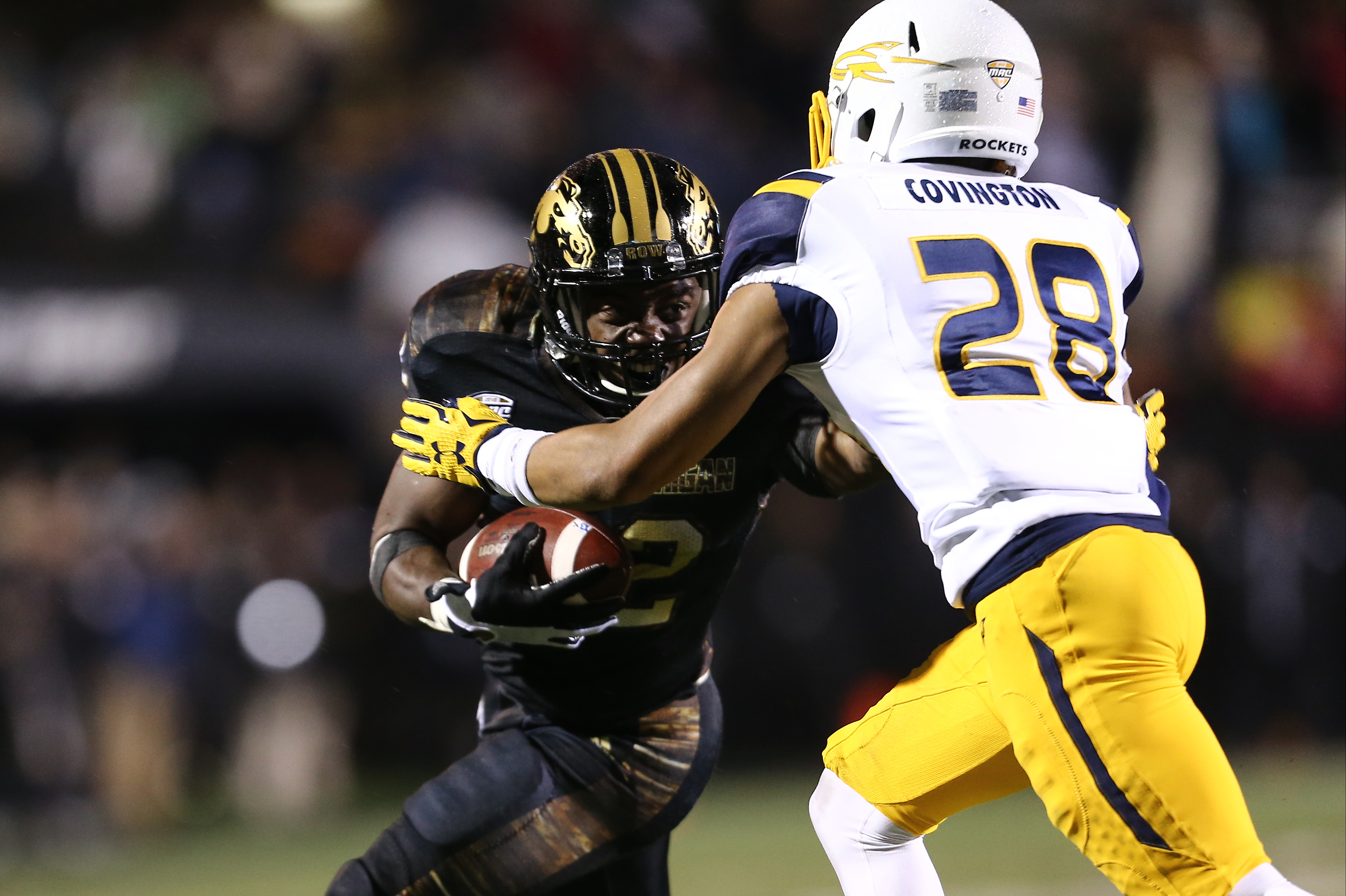 If this isn't the Rockets' year, will it ever happen?

WMU will regress, but this is still a MAC contender.

I really think this is Toledo’s year to take charge. Granted, I’ve thought that multiple times before, and if Tim Lester is able to click with the talent P.J. Fleck left behind, I won’t be thinking that at the end of this season.

NIU collapsed, but their West run might not be done just yet.

If UT or WMU doesn’t win, it’s almost certainly going to be one of these two. Anybody from the MAC East has a chance to snare a muddy division title and pull a title game upset, I guess, but from a pure quality standpoint, Miami and NIU are closest to the Rockets and Broncos.

The Falcons tear down and rebuild as well as anybody. But was 2016 more the former or the latter?

CMU goes 6-6 or so every year, but does it dramatically!

OU is the rare MAC team with a unique identity: disturbing steadiness.

Really, this is a 5a, 5b, 5c, etc., situation. I found almost no way to separate them, and I’ve changed my mind about the order multiple times.

Akron is the most volatile team of the bunch, and Ohio’s the most steady. CMU could break the "six or so losses every year" trend, but close games could skew the win total in either direction. I like EMU more than my numbers do, and the odds of Bowling Green bouncing back are solid but not guaranteed.

One of football’s winningest coaches faces some urgency with one of FBS’ worst programs.

Can the Golden Flashes save Paul Haynes’ job? Ehhhhhhhh ...

Just about every year, a coach pulls off a third-year leap you didn’t see coming. Examples from 2016: EMU’s Chris Creighton and Wyoming’s Craig Bohl. Neither the stats nor eyeballs really see it coming when it happens, and who knows, maybe it’ll happen for UB’s Lance Leipold. He’s still a good coach, after all. But when "Hey, maybe a random leap will occur" is your best reason for optimism, you’re starting pretty far down on the power rankings.

Meanwhile, I’m pretty sure Kent State will be hiring a new coach in about eight months. Hey, Darrell Hazell is available ...

Here’s how my statistical system has the MAC laid out for 2017, with 0 equating to an average FBS team. (You can find full 2017 S&P+ projections here.) 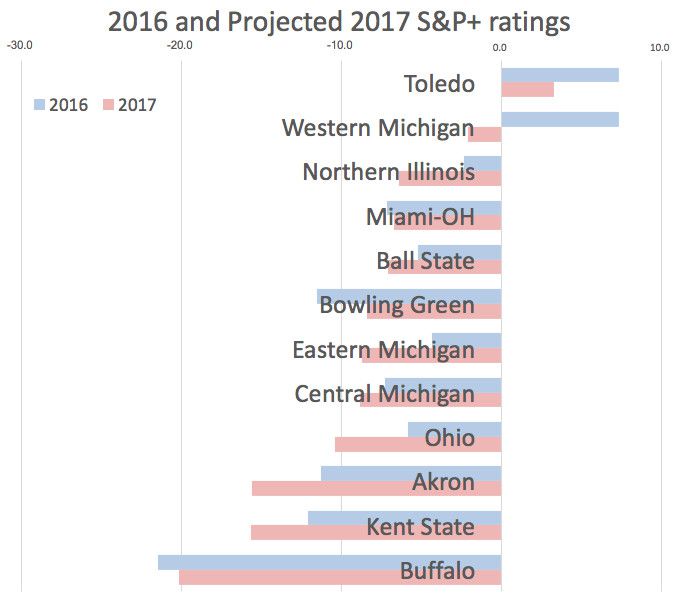 S&P+ is higher on Ball State and lower on Akron than I am, basically.

The most interesting thing to me about these West projections: the fight for a sixth overall win could be fascinating. Toledo and WMU are in front of the pack, but the other four in this division could be taking each other out for bowl eligibility. All of them have a chance at it. (You can’t really say that about the East.) 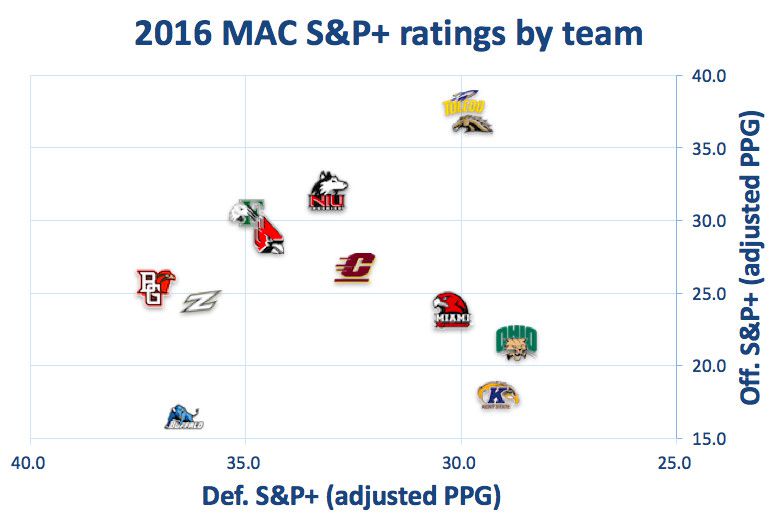 Only two were particularly decent on both sides of the ball, and the home of MACtion didn’t have nearly as many high-octane offenses as its reputation suggests it should. That said, a lot of MAC teams were dealing with quarterback injuries. That might not be the case this fall. 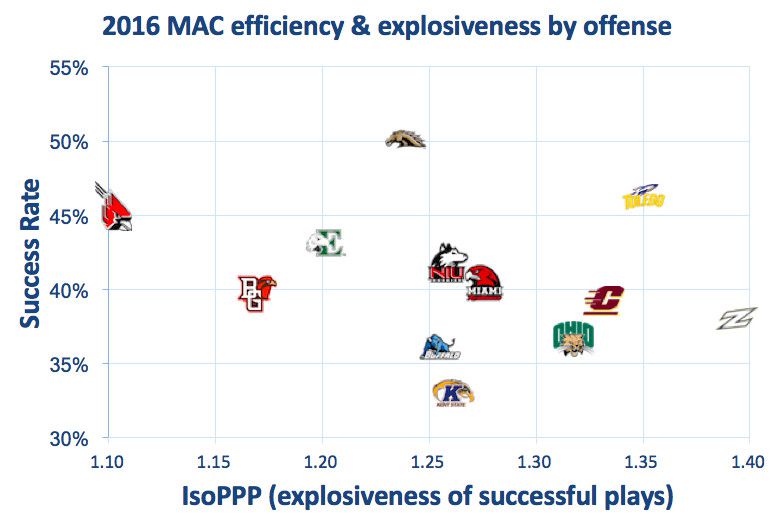 It was hard to separate yourself from the pack in efficiency, but only a few teams figured out how to carve out bigger chunks of real estate. And Toledo’s was just about the only offense that figured out both efficiency and explosiveness.

There are lots of quarterbacks, which honestly surprised me. But the Bulls will only go as far as Jackson will take them, and Holley might also be the Golden Flashes’ best running back and receiver.

P.S. Stay healthy, Thomas Woodson. I want to see what you’re capable of. You too, Shaq Vann. 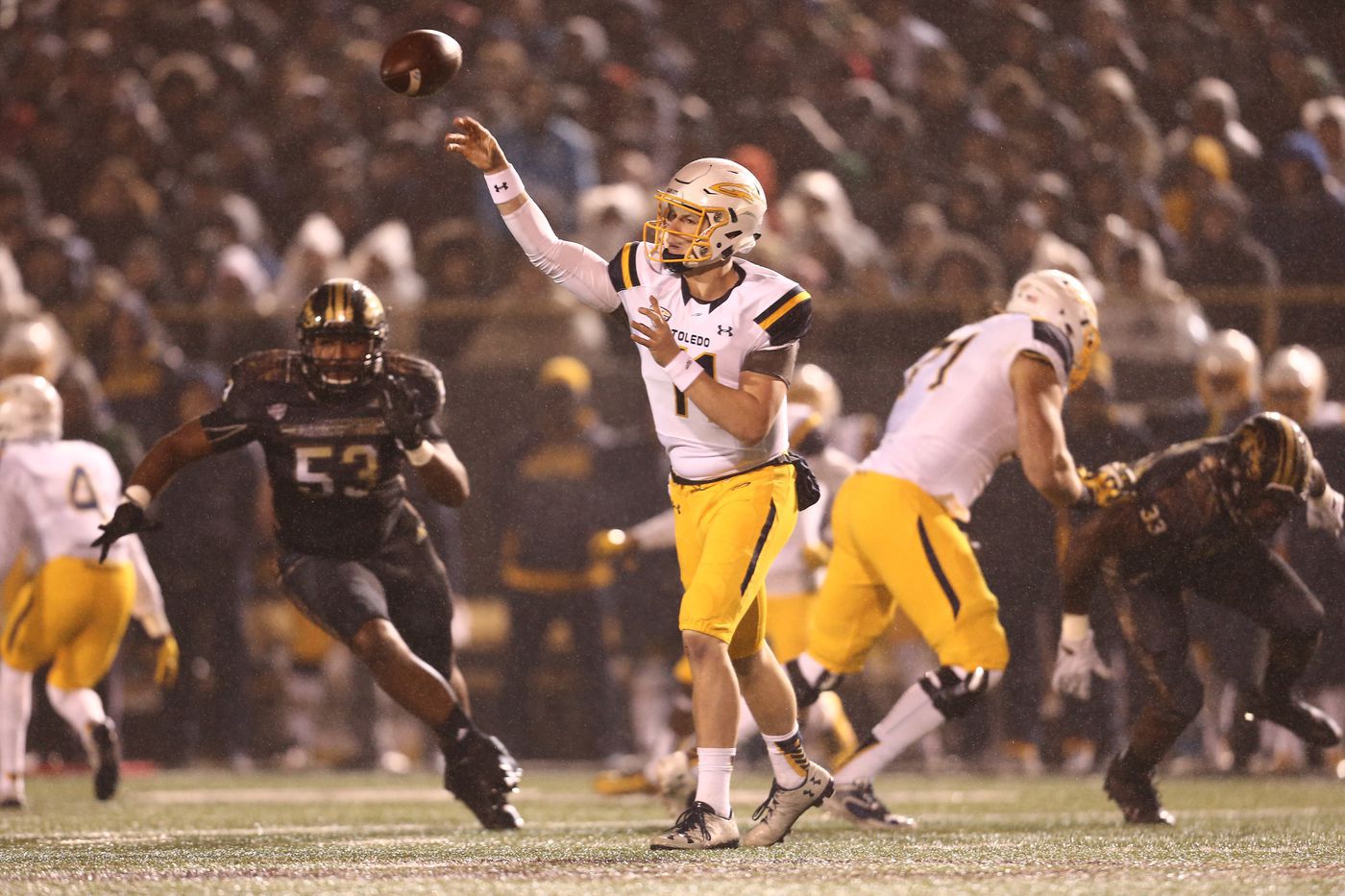 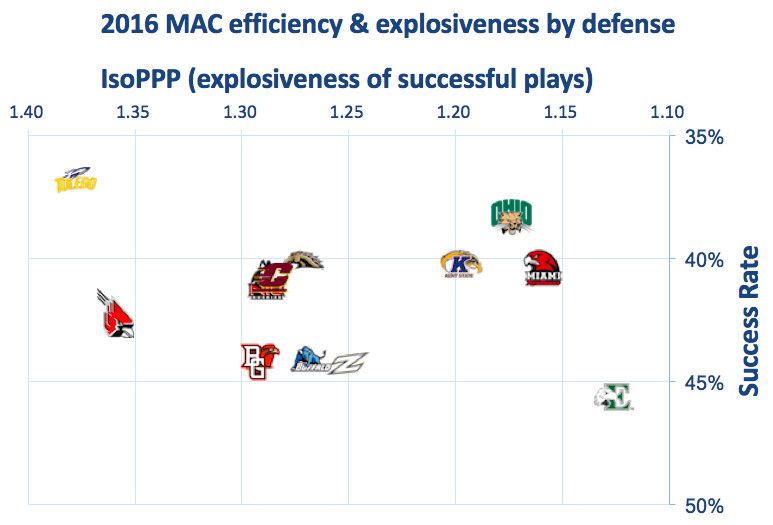 From an efficiency standpoint, there was almost no separation whatsoever. Ten of the MAC’s 12 teams hovered between about 38 and 44 percent in terms of success rate. But the magnitude of the big plays varied significantly, and only the trio of Ohio, Kent State, and Miami was particularly balanced.

I listed six cornerbacks and a safety above. A league with good QBs and good cover guys? That sounds pretty fun, actually. 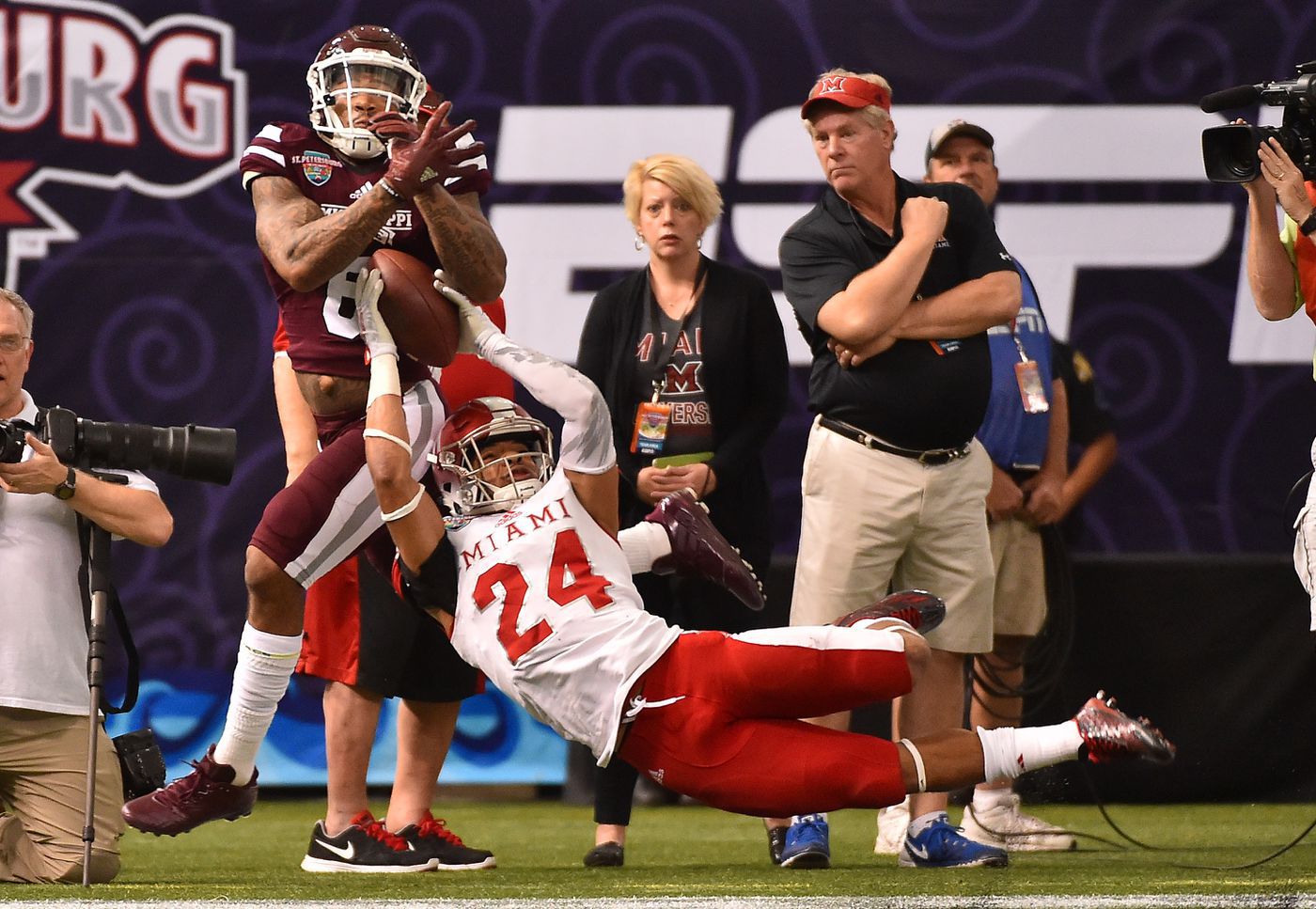