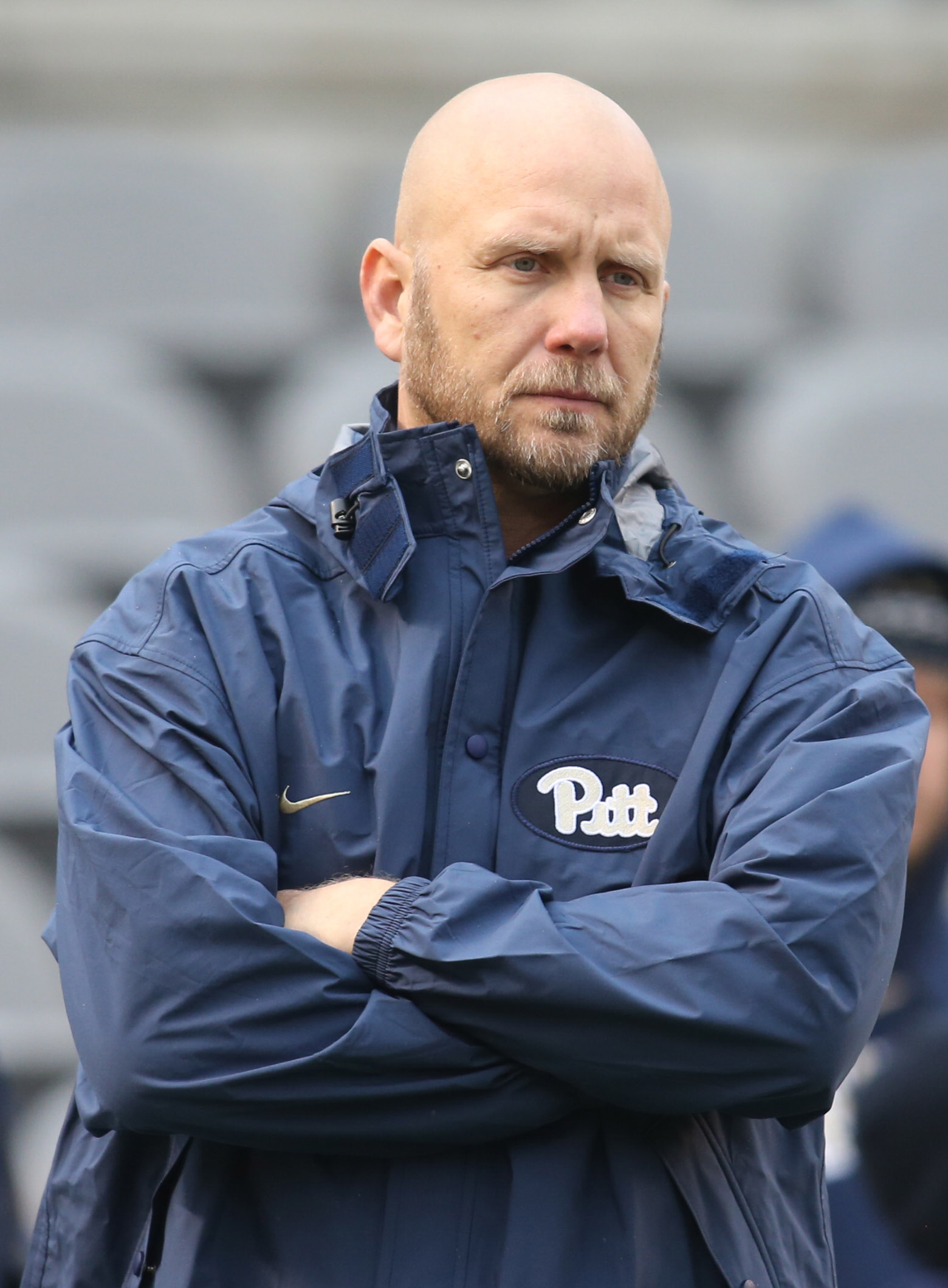 For years, LSU has been the man-ball team in college football. The Tigers have used an offensive strategy geared around a mostly unparalleled ability to line up in the I-formation, shove aside the first wave and second waves of the defense, and then unleash powerful and freakishly athletic backs to run over whatever was left.

This has manifested itself in the numbers. Look at the monstrous numbers LSU runners have put up and the usually small ones its receivers and QBs have put up:

In 2013, Zach Mettenberger eviscerated opponents and helped both Jarvis Landry and Odell Beckham Jr. get more than 1,000 yards. Other than that, the Tigers have generally been good at running the ball and somewhere between "barely competent" and "not good" in the passing game.

Of course, this is why there was a regime change, and why new head coach Ed Orgeron brought in Pitt offensive coordinator Matt Canada to reinvigorate the Tigers’ offense. Canada was an interesting choice, and he should bring a different, yet familiar, spin on LSU’s patented offensive approach.

In the past, LSU has misused talent.

The sad theme of LSU’s efforts over the past decade has been the way it’s routinely wasted tremendous offensive talent at non-running back positions. The Tigers have repeatedly signed top recruiting classes and churned out NFL players, but they’ve left a lot of points on the field while those players were in college.

The issue has never been a lack of skill players that could get open or do something with the ball in their hands. Nor has it been an inability to block up front. The issues have been a lack of skill and development at the QB position and a lack of creativity over how to involve the athletes on the roster, other than lining them up behind the QB and having them run behind lead blocks by fullbacks and tight ends.

At Pitt, Canada came up with some creative solutions.

Canada ultimately wants to do what LSU has done so easily over the last several years: run the ball effectively with the lead back. However, he hasn’t routinely been coaching teams loaded with NFL receivers, linemen, and running backs who expect to just line up and beat most everyone on the schedule through straightforward plans of attack.

The Matt Canada offense has basically been the equivalent of the Dave Aranda defense — a scheme meant to make the most of versatile players to create advantages that are needed due to lack of elite talent.

If you add up the numbers for LSU TEs Collin Jeter and Foster Moreau and FBs Bry’Kiethon Mouton and J.D. Moore, you end up with 40 touches for 330 yards and three TDs. It was rare that opposing teams needed to worry about anyone on the field for LSU having the ball other than Leonard Fournette or Derrius Guice.

Canada had a wide variety of ways to involve these nominal blockers, as well as skill guys like Quadree Henderson and Jester Weah, and to set up feature back James Conner for success. Pre- and post-snap options were major components in that process.

Canada designed one run-pass option that effectively combined the power running game, the shovel pass, and the sprint-out pass. Canada loves the shovel option, which, mixed with an outside toss-read game, helped the Panthers beat Clemson in Death Valley. He also put a unique spin on the jet sweep. All of these plays involve a lot of motions, which help the QB learn how to attack the defense on any given play.

At the heart of it all are basic schemes like inside zone or power that everyone else uses. The difference has been that Canada tends to do a lot more outside of those basic runs, with his motions and accompanying options, than other offenses that utilize FBs and TEs. But instead of preventing defenses from stopping these runs with speedy skill athletes spread wide to hold defenders, he’s involving FBs and TEs as options in the attack.

Here’s an excellent example from Pitt’s game against Miami:

That’s a jet sweep handoff to a fullback (lined up as an H-back). Granted it’s third-and-1, but I’m still not sure I’ve ever seen another team hand the ball off to a FB on a jet sweep before. The effect of Pitt regularly involving these guys is creating a ton of confusion for the DEs and LBs that have to add "and he may also receive a hand off or catch a pass" when they’re trying to diagnose the intentions of Canada’s players in the precious seconds before the ball crosses the line of scrimmage into space.

Much of what Canada is looking to accomplish would be handled in a spread offense, with run-pass options or QB run options designed to create double teams or leverage for the skill players. The genius of Canada has been accomplishing the same things from under center or with FBs and TEs that stay in the box.

How does this approach help LSU?

When Aranda brought his defensive scheme from Wisconsin to LSU last season, he made major adjustments and tweaks in Year 1. The scheme was developed at Hawaii and Utah State before undergoing further evolutions at Wisconsin. But an underlying component was the use of versatile linebackers and safeties that knew how to play multiple roles and could shift assignments to cause confusion and negative plays.

If Canada’s most brilliant adaptations to the offense formerly known as pro-style have been solutions for how to run the ball effectively between the tackles without dominant personnel, how does that translate at LSU, where the Tigers do have dominant personnel? No doubt they can still improve, and will have a wider variety of ways to attack Alabama’s stifling defense. But will Canada’s methods solve their struggles to improve the QB play and unleash their NFL-worthy athletes at WR?

Canada’s offensive system has the practical effect of turning the QB into a triple-option style distributor whose qualifications relate primarily to his ability to master the system and deliver the ball on time. Pitt’s Nathan Peterman was pretty tough in the pocket and capable of throwing some accurate balls, but the offense didn’t ask him to regularly make thorough progressions or difficult throws. It was much more often something like this:

Clemson’s favorite way to handle an offense is to attack it with the blitz, but the Tigers had been caught and burned multiple times by the Pitt shovel-option play at this point. That meant that when Pitt went back to the shovel-option well only to run play-action, the Tigers’ wires were crossed and they weren’t matched up properly on the Panther skill players. No one picked up running back James Conner turning what looked like a lead block or perhaps flat route into a wide open run down the sideline. Peterman knew the intention of the play design and beat the blitz by being able to toss the ball out accurately while on the move.

Under Canada, LSU has two options for how to approach the QB position.

The first is to find and develop QBs that can master a system filled with checks and motions to dissect defenses, and then learn to make quick decisions so that athletic skill players can make things happen. Given that their 2017 recruiting class is headlined by pocket-passer Myles Brennan and the rest of the roster is also filled with pocket passers, this is the most likely option.

The other is to try and salvage Brandon Harris and recruit more dual-threat athletes, while adopting Canada’s offense to work more like a spread system. In a system like that, the QB’s legs are a primary constraint on the defense, rather than a pitch to a FB or TE. LSU also has a four-star dual-threat QB commit, Lowell Narcisse, joining the program this season, and could choose this route.

Either way, there’s good news for the Tigers.

They have an OC who’s proven he can utilize traditionally "pro-style" players while attacking defenses mentally (with motions, checks and options) and physically (with bruising, speedy athletes). If the Tigers can do both at once, their talent will carry them a far way.