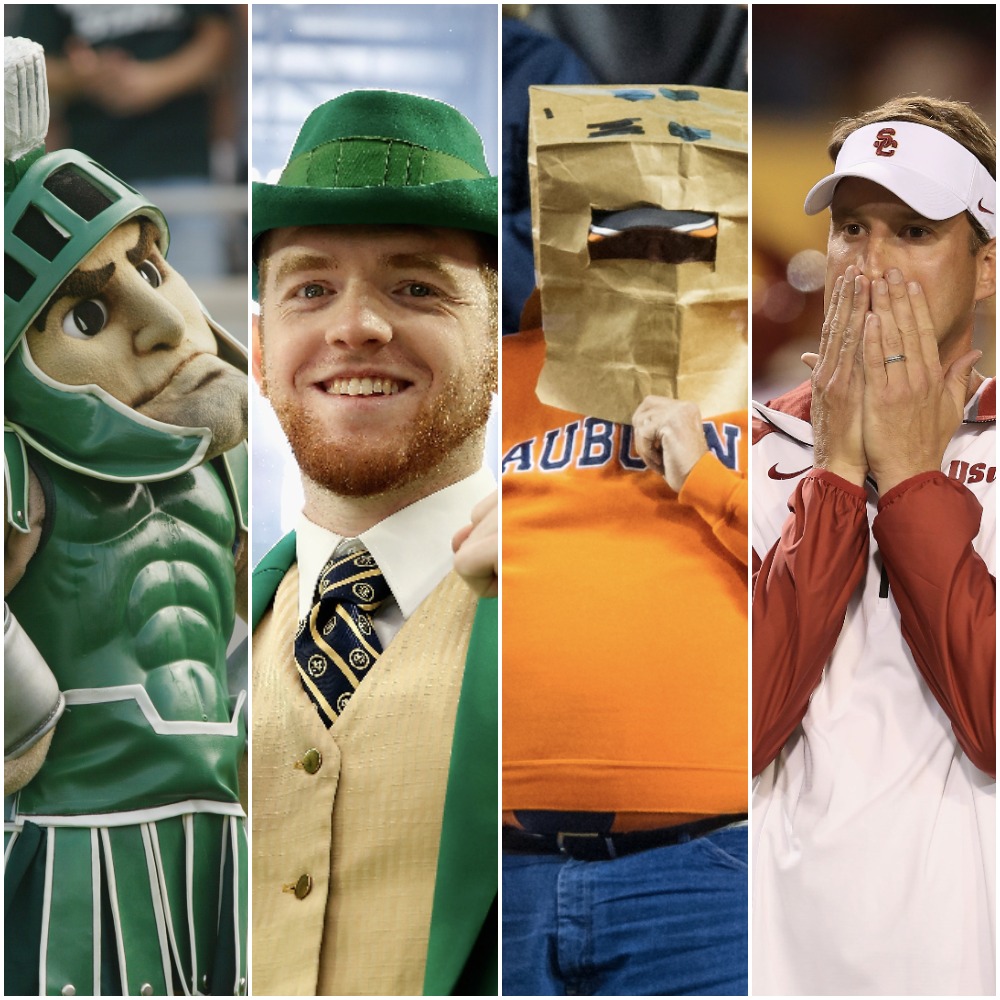 The AP Poll is pretty good, but its voters have a hard job. Ranking college football teams before they’ve played is always going to look iffy in hindsight. Some people complain every year that we should get rid of preseason rankings, but they’re wrong, because then we’d have less to yell about in August.

Let’s go back through every preseason AP Poll ever and spot the team that made preseason voters look the silliest. We don’t want teams that started No. 1 and finished No. 12; we want teams that went from top 10 to 2-10.

These are technically the most overrated college football teams ever, but they didn’t ask to be ranked. Many have nuanced context at play, such as a key injury, but the rankings are the rankings.

2015: SEC media picked Auburn to win the conference. The AP No. 6 Tigers finished last in the SEC West.

2012: Arkansas went from No. 10 to 4-8 with a demented comedian as interim coach, topped by USC plummeting from No. 1 to 7-6 and a two-touchdown loss in a bowl it didn’t want to attend.

2011: No. 8 Texas A&M wasn’t bad, with only one of its six losses coming by more than a TD, but those included a loss Texas fans will talk about until the meteor takes us.

2009: From No. 3 to 8-5 isn’t disastrous, but Oklahoma lost to archrivals Texas and Nebraska and got destroyed by Texas Tech, all with an injured Sam Bradford.

2008: The defending champ LSU Tigers went 8-5, the No. 9 Clemson Tigers went 7-6 and lost their head coach midseason, and the No. 11 Auburn Tigers went 5-7 and fired their OC midseason.

But LSU still had title warmth, and Clemson and Auburn replaced those guys with coaches who’d help win titles. Therefore, it’s the Tigers. Auburn’s (x2), that is, which ended their longest-ever Iron Bowl win streak in a 36-0 loss to Bama.

2007: Louisville turned No. 10 into 6-6, while Michigan only fell from No. 5 to No. 18. But Michigan got blown out twice, lost to Ohio State, and lost what many consider the biggest upset of all time.

Florida State fell from No. 11 to 2-6 in the NCAA records, via sanctions stuff.

The NCAA’s alternate facts make for a funnier tiebreaker than FSU’s win over Miami, which went from No. 12 to 7-6.

2004: Bill Snyder’s capable of being overrated! No. 12 was too trusting for a Kansas State that’d lost a bunch and would go 4-7.

2000: One everybody can enjoy! Alabama went from No. 3 to 3-8! Shut out by Southern Miss! Lost to UCF! It gets worse: this year contributed to a two-year bowl ban. It gets worse: one assistant who was out of a job because of this season would beat the Tide in the 2016 title game. 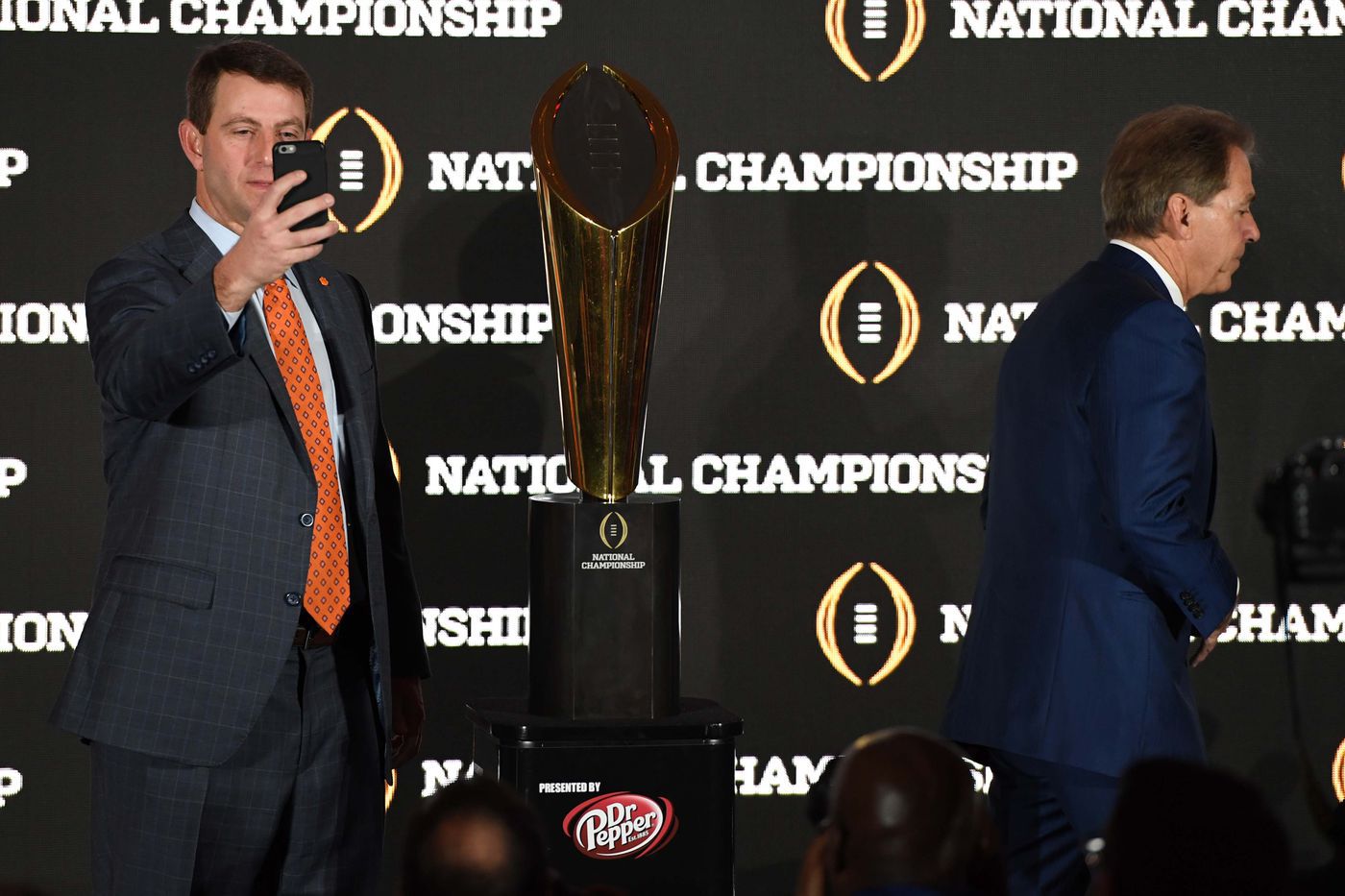 1998: No. 8 Arizona State pulled off three different losing streaks in one season, with each including one blowout. No. 9 LSU finished 4-7, but was only really out of one game.

1995: Howard Schnellenberger led Miami to its first national title, Louisville to its first bowl win, and FAU to its first conference title. He also led No. 15 Oklahoma (x2) to its only 5-5-1 record.

1993: Georgia and Stanford have cases, but Syracuse fell from No. 6 to 6-4-1 and lost a combined 92-0 to good Miami and West Virginia teams in back-to-back games. It also snowed 42 inches in Syracuse that year, fwiw.

1992: Penn State and Iowa fell, but go with Clemson, which turned No. 13 into a 5-6 record with losses to 3-8 Maryland and two 5-6 rivals. Discord eventually led to head coach Ken Hatfield leaving to take the Rice job.

1991: Houston finished 1990 with the country’s best offense and an overworked defense, then entered 1991 at No. 10 with a first-place vote. UH lost five blowouts and two close games.

1990: Jack Crowe took over Arkansas from the guy who’d go on to leave Clemson for Rice. The Hogs ended a streak of five nine-win seasons, going from No. 14 to 3-8 amid roster turmoil, and Crowe was fired in 1992 after losing to The Citadel in the Razorbacks’ first game as an SEC team.

1987: Earle Bruce had eight top-15 finishes in eight years at his alma mater, Ohio State. His ninth year — from No. 4 to 6-4-1, with three close losses after star WR Cris Carter was ruled ineligible — somehow got him fired.

1984: Started No. 3, didn’t win a second game until the second-to-last week, and aren’t known for anything other than losing to eventual champ BYU in ESPN’s first live college football broadcast? Hey, Pitt!

Kentucky had a preseason ranking?

1973: Colorado, the No. 11 starter and 5-6 finisher that lost to a bunch of good teams (but also to prehistoric Kansas State). It was head coach Eddie Crowder’s final season, and I’m finding a lot of coaches stick around one year too long.

1972: Local legend Frank Broyles’ Arkansas (x3) hit a slump when No. 4 turned into 7-5. It started with a blowout loss to USC. Why does Arkansas ever play USC? The average score in their five-game series is 35-13, Trojans.

1970: Five of No. 11 Missouri’s six losses were by multiple scores. Head coach Dan Devine, who’d led Mizzou to four of its six top-10 finishes, left for the NFL and returned to lead Notre Dame to the 1977 national title. Mizzou wouldn’t again finish in the top 10 until 2007.

1969: Georgia and Michigan State are contenders, but No. 6 Oklahoma (x3) takes it, with blowout losses to good Missouri and Nebraska teams, a loss to national champ Texas, and ... a blowout loss to 5-5 Kansas State. Footage of KSU scoring 59:

Speaking of UCLA and the state of Texas:

1967: Michigan State (x2) entered at No. 3 after two straight undefeated seasons. It left at 3-7 and would lose five-plus games in all of Duffy Daugherty’s final five years.

1964: Ole Miss pulled off the rare No. 1 collapse, going 5-5-1 and losing to 4-6 Mississippi State. The Rebels lost their Bluebonnet Bowl (they made a bowl?) to Tulsa, whose Missouri Valley Conference had five members.

1961: No. 1 Iowa scored 27 or more in its five wins and 14 or fewer in its four losses. Rookie head coach Jerry Burns wasn’t a great college guy, but would have a 25-year NFL career.

A typical play from Iowa’s shutout loss to Purdue:

If you think modern preseason rankings are bad, look at the ‘50s.

1957: No. 4 Minnesota lost five games by multiple scores, but No. 19 USC (x5) finished one touchdown away from 0-10, thanks to major recruiting sanctions and a first-time head coach. East Coast voters not know about the sanctions, or something?

The media stuck by its squad. ND’s Paul Hornung somehow won the Heisman. He was a distant second in all-purpose QB yards, behind Stanford’s John Brodie, and had a three-to-13 TDs-to-INTs ratio. JIM BROWN AND PLENTY OF OTHER OPTIONS WERE RIGHT THERE.

1955: The preseason No. 11 averaged 11 points. Rice! Head coach Jess Neely had arrived at the tiny school after choosing to leave Clemson, meaning Hatfield in 1994 was the second to do so.

1954: Another sprawling disaster. No. 5 Illinois landed at 1-8 and last in the Big Ten, but Texas, Michigan State, and others could’ve won this.

1951: Meet the preseason-ranked team SRS grades worse than The Citadel, Hardin-Simmons, Loyola Marymount, and 96 other ‘51 teams and two points worse than 2016 Rutgers. No. 12 Nebraska (x2) won one game (over 4-4-1 Iowa State), but had a tie with 1-7-1 Kansas State changed to a win due to an ineligible player.

All time: Notre Dame ties USC at the buzzer for the most ever, with 2016’s eight-point loss to Michigan State keeping the Spartans from doing that instead.

Here are the 25 candidates.