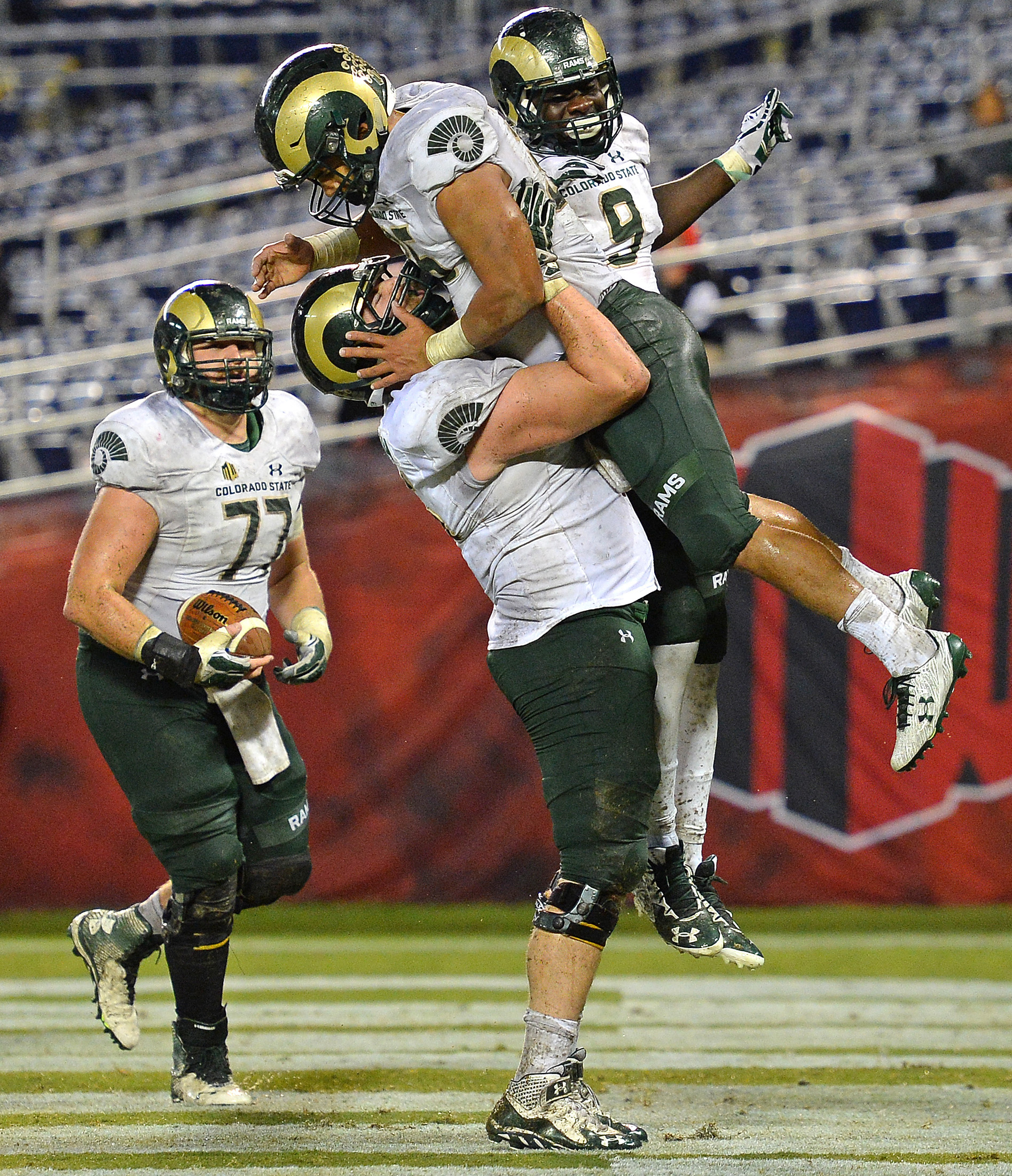 CSU's gorgeous new stadium should be home to one of 2017’s best non-powers.

The Broncos are no longer a sure thing, but the bar remains high.

SDSU has finally become what it should’ve always been.

But I’m enamored with Colorado State. The run the Rams went on toward the end of 2016 showed a level of upside that even Boise State would struggle to match, and they return many of the reasons for that run.

And while I don’t take schedule into account while putting these rankings together, CSU’s schedule comes together nicely; SDSU isn’t on it, and Boise State and Air Force both come to Fort Collins.

The Cowboys have big names and a division title to defend.

Either the slide stops, or the Aggies consider a coaching change.

The Falcons should remain steady in the most exciting ways possible.

I’m taking a risk on Hawaii here, but I feel pretty good about both Wyoming and Utah State being secondary MWC Mountain challengers. Wyoming has maybe the second-best player in the conference in Josh Allen, and USU was all sorts of unlucky last year. Meanwhile, Hawaii’s Nick Rolovich proved as much as maybe any coach in the country in 2016 and boasts a hell of a backfield.

As for Air Force, S&P+ hates the Falcons’ defense because of the level of turnover, but as I wrote in the Falcons’ preview, turnover is almost a good sign for Air Force. It means recruiting has continued apace.

Bob Davie's Lobos are overachieving mightily, but there's a concern.

The Rebels could be something special by the time the Raiders arrive in Vegas.

New Mexico needs to play defense at some point, and UNLV needs to stay healthy. If any of those come true this year, these could be Tier 2 teams.

Jay Norvell has to figure out what this program should be – then execute on it.

In Brent Brennan, SJSU hopes it’s found its own version of P.J. Fleck.

Does Jeff Tedford have any magic left?

Here’s how I know the Mountain West is improving: There isn’t a surefire, guaranteed last-place team. The bottom of the conference has weighed it down for a few years, but all three of these are just a couple of pieces and bounces from a bowl run. Still, these have more to prove than everybody else, so they start at the bottom.

Here’s how my statistical system has the MWC laid out for 2017, with 0 equating to an average FBS team. (You can find full 2017 S&P+ projections here.) 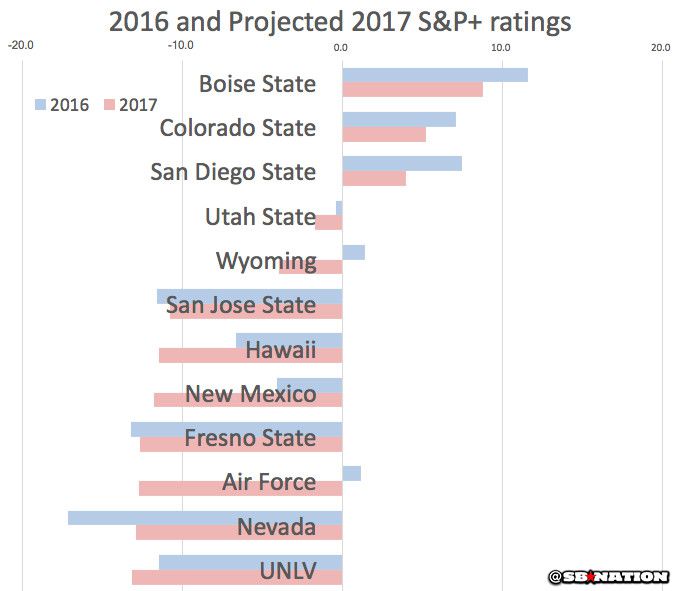 In terms of rank order, this is easily the most I’ve differed from S&P+ so far this year. I have Air Force and UNLV quite a bit higher and SJSU quite a bit lower. Air Force is just a different animal, UNLV got wrecked by injury last year, and I’ve started to like the Brent Brennan hire at SJSU, but I think it’s going to take him a year to get pieces in order.

This makes me feel less crazy for picking CSU over Boise State, since it’s close on paper, too.

You can tell from the S&P+ projections chart above, and the numbers here reinforce it: a lot of MWC teams are really close together. SDSU is the obvious West favorite, but the other five are separated by just 0.3 projected conference wins. If one in this bunch wins all of its tossup games, that team could end up a co-contender. S&P+ says UNLV and SJSU are most likely; I say it’s Hawaii.

Because of the conservative nature of win projections — if you’re a 60 percent favorite to win a given game, you get 0.6 wins for it, so it’s hard for any team to top about 10 projected wins — we’re looking at only five MWC teams projected to bowl. That should stretch to seven or so, depending on who wins the tossups. 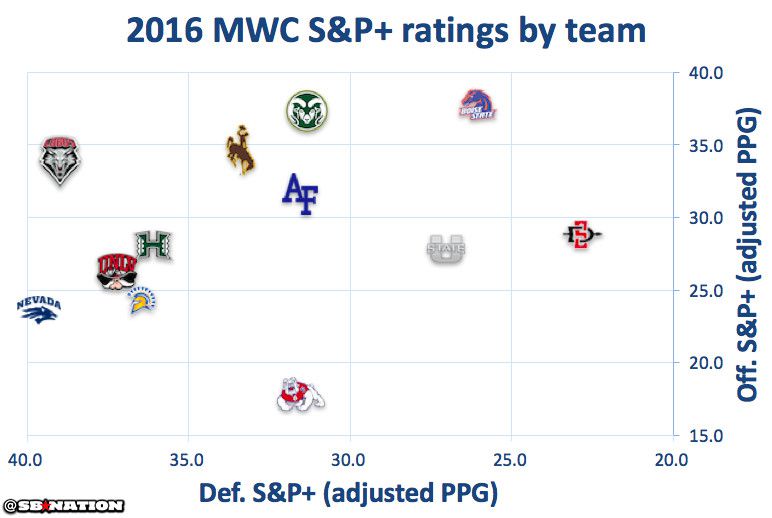 Only about three MWC teams played defense last year, while almost everybody had an exciting run game. 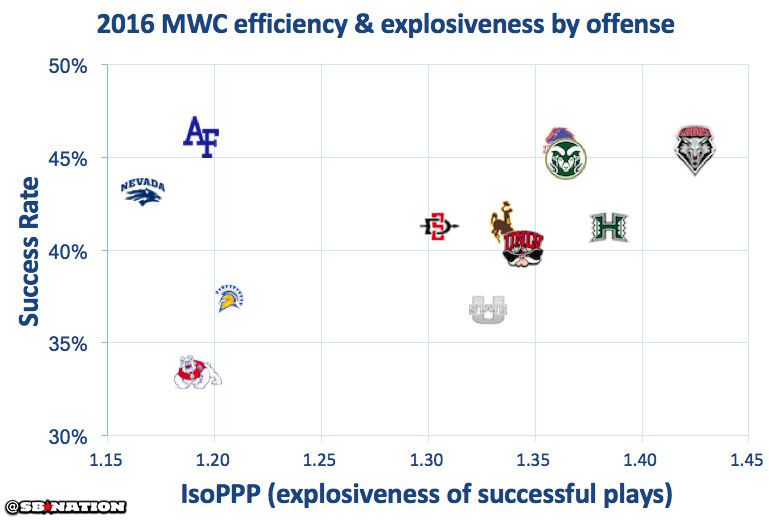 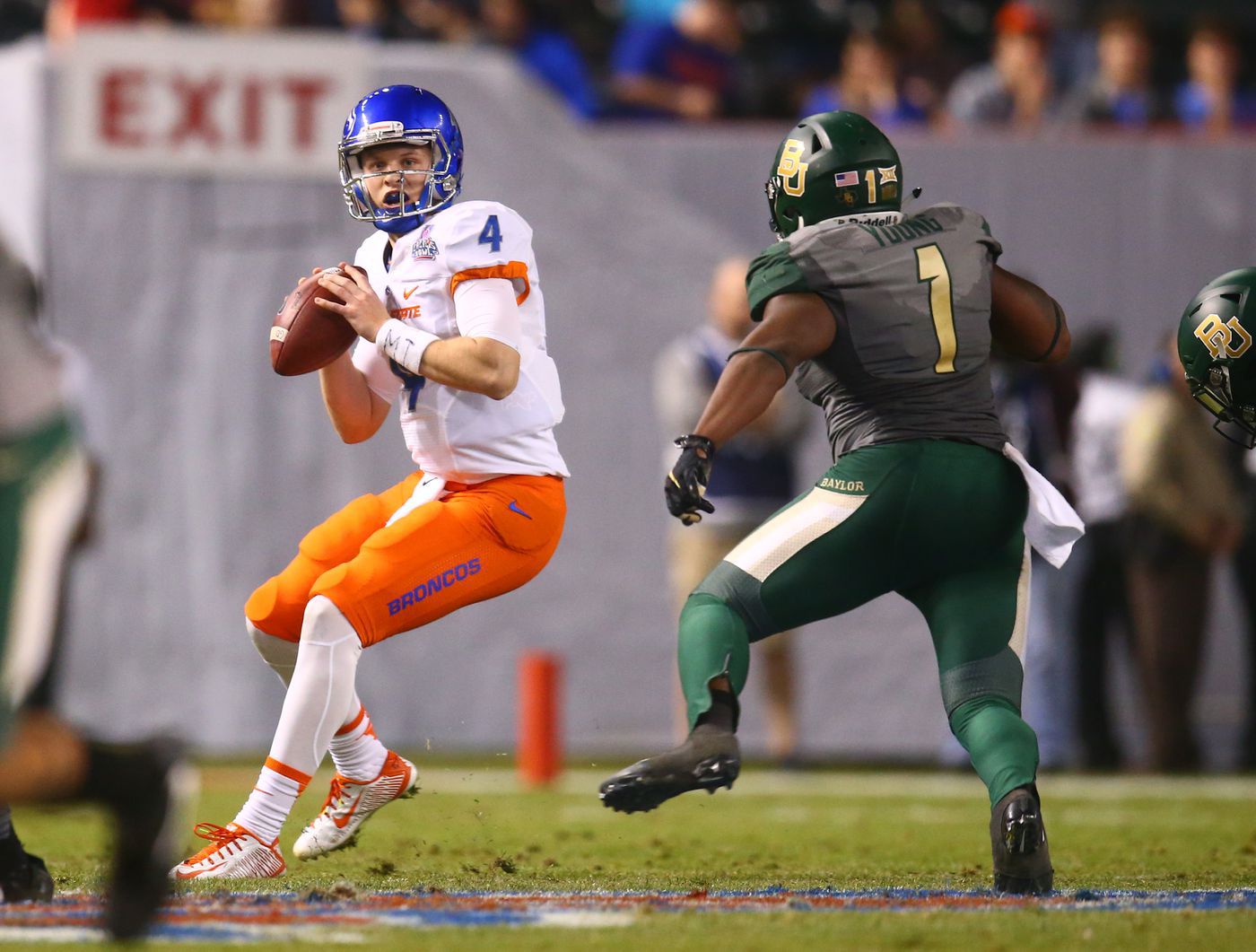 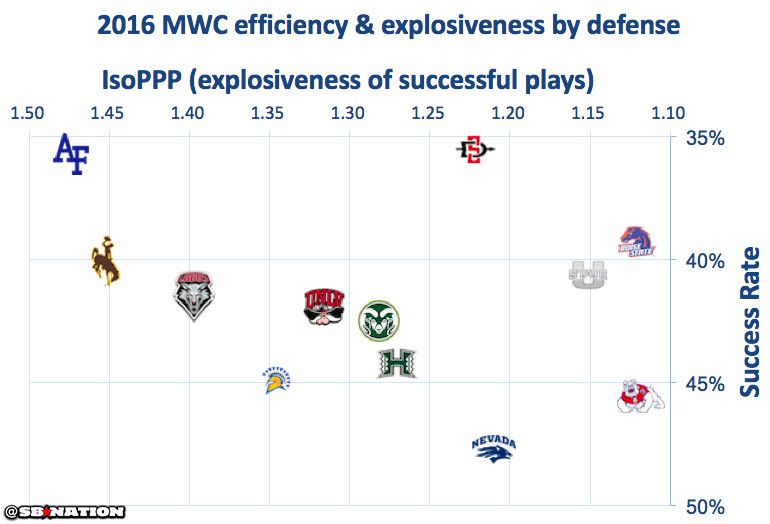 You had a couple of bend-don’t-breaks (Fresno State, Nevada), a couple of all-or-nothings (Air Force, Wyoming) and a whole bunch of nondescript, not-that-great defenses in the middle. And a lot of these units are rebuilding.

I ended up picking mostly between Baldwin, Moa, and Henderson. Baldwin gets the nod because he plays on the defense most likely to be awesome. 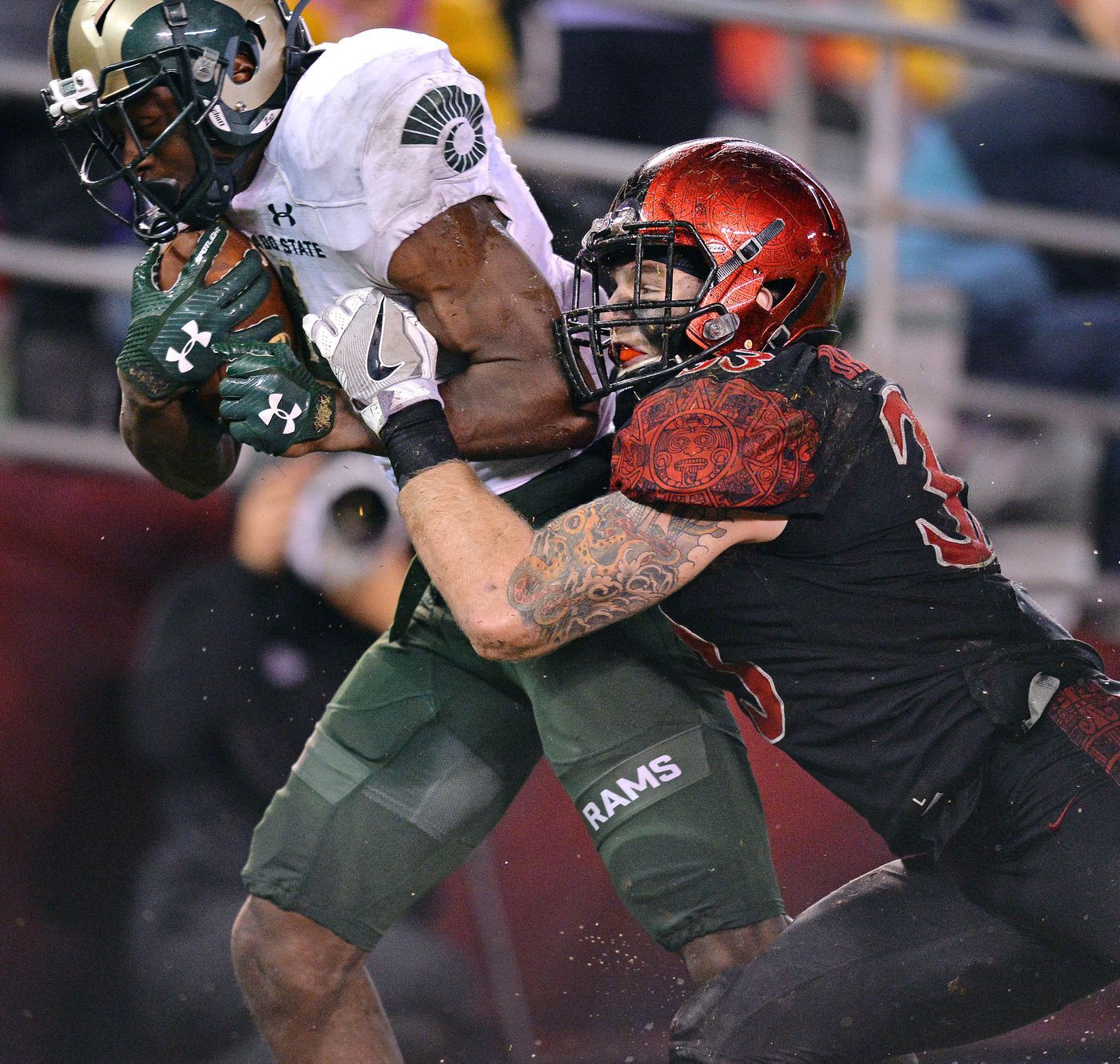