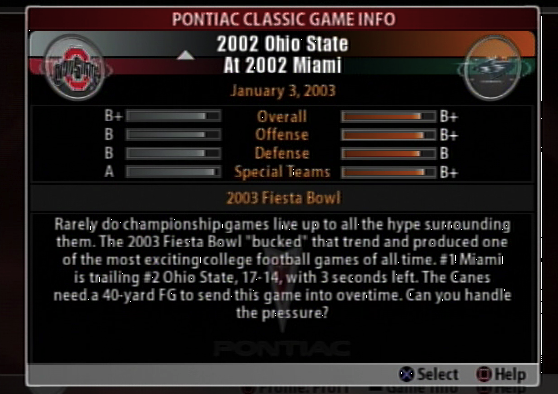 Before its last edition, NCAA Football 14, EA Sports had been cranking out college football games for years and years. The game served as a perfect counterpart to the ongoing Madden series. From the epic loading screen that opens to the sound of college bands ...

... NCAA Football was an amazing series that experimented with some awesome game modes over the years.

There was Campus Legend/Road to Glory mode, in which you could start in high school, choose your college, and become a college football deity. In the later installments, you could pick a classic college player, put him on ANY team in the game, and play out your career. Barry Sanders on the LSU Tigers? Sure. Tim Tebow on the Oregon Ducks? Absolutely.

One of the more memorable modes was College Classics. I already went over this game mode with the EA Sports basketball counterpart. I decided to go back with this one and give the NCAA Football 2005 Classics mode a try.

Of course, Easy Play mode was turned off. If it was on, it would have defeated the entire purpose of the article. 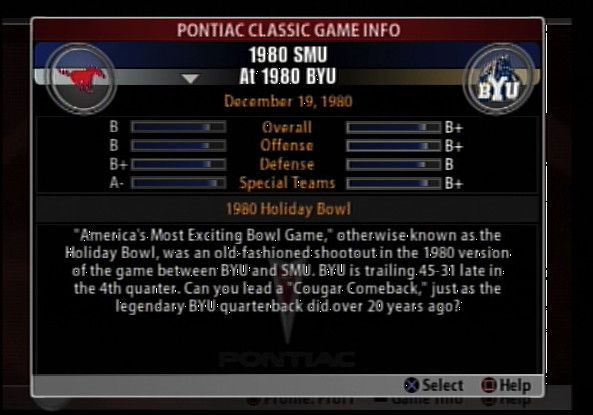 You have two minutes and 33 seconds to come back from a 45-31 lead against a pretty damn good running back duo that included Eric Dickerson. You have to be perfect, or you will lose. You have three timeouts, but you have to use them wisely.

Also, this is a video game in which receivers drop the easiest passes for NO REASON.

Some of you might have never passed this level, and playing it again after all these years, I don’t blame you. A lot of things have to go right to even have a chance. This is one of those levels where you really start to appreciate just how impressive this was in real life. 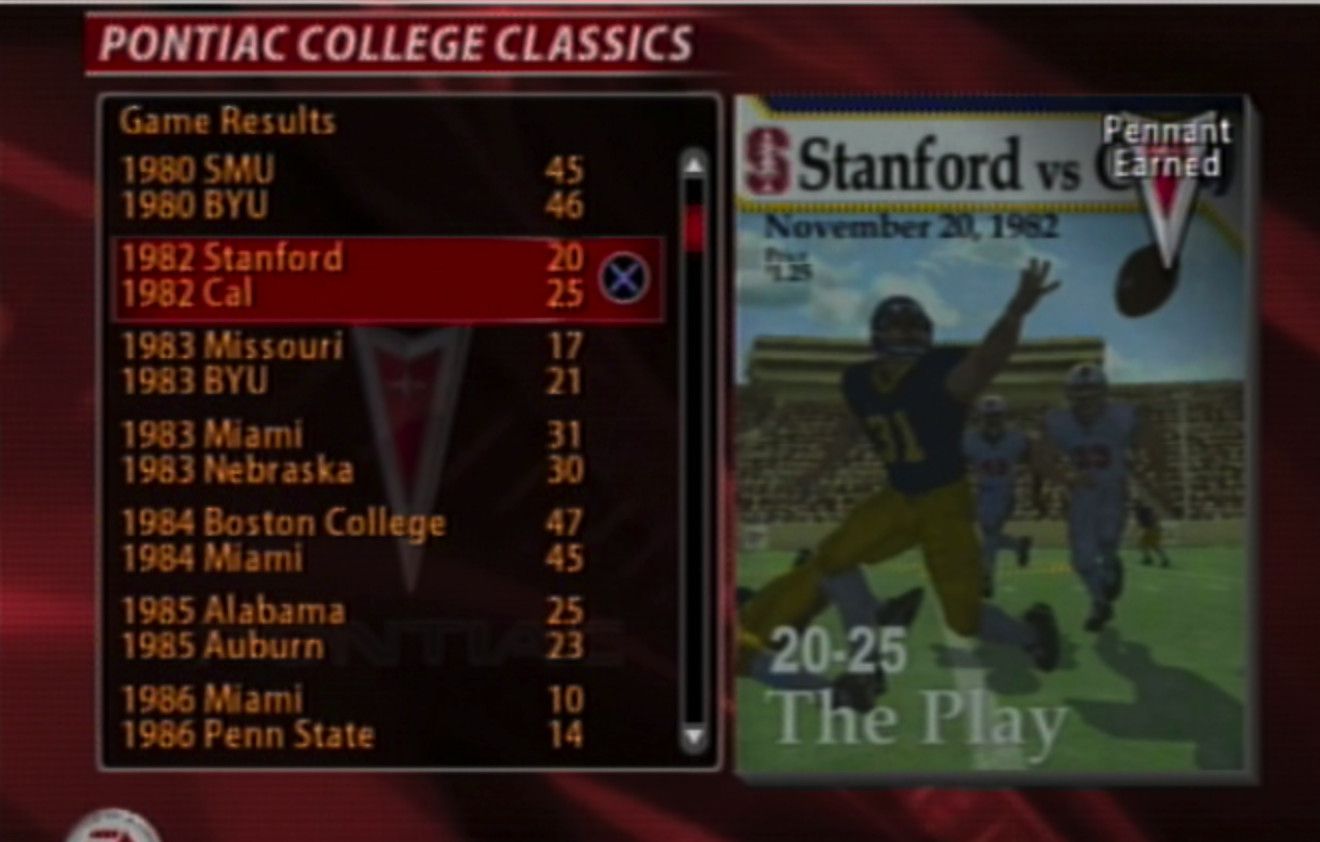 Cal vs. Stanford
Difficulty: Hard, unless they miss the FG

This actually starts at the field goal before the miraculous play, so you have a chance to block the kick ... or play until he actually misses it lol.

College kickers, am I right?

If the kicker makes the field goal, then you either have to return the kick for a touchdown or try to grab enough field position before the clock hits zero and going for the Hail Mary. Both are difficult to achieve, even without the band crashing the field in the video game version. 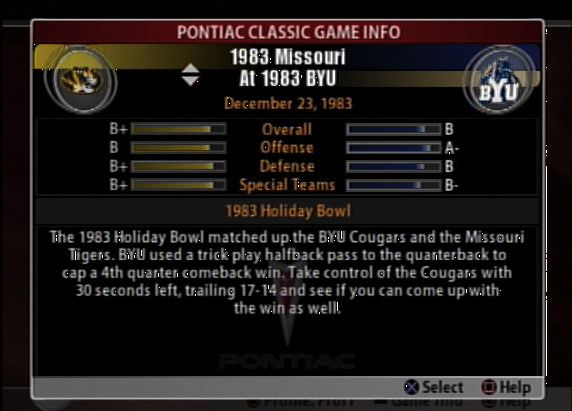 With that being said, you have 30 seconds to go 14 yards. The whole playbook is at your disposal, and you are already in field goal range. To top it all off, your quarterback is fuckin’ Steve Young. While he was just a backup in the 1980 BYU challenge, he is god-level good in this edition. 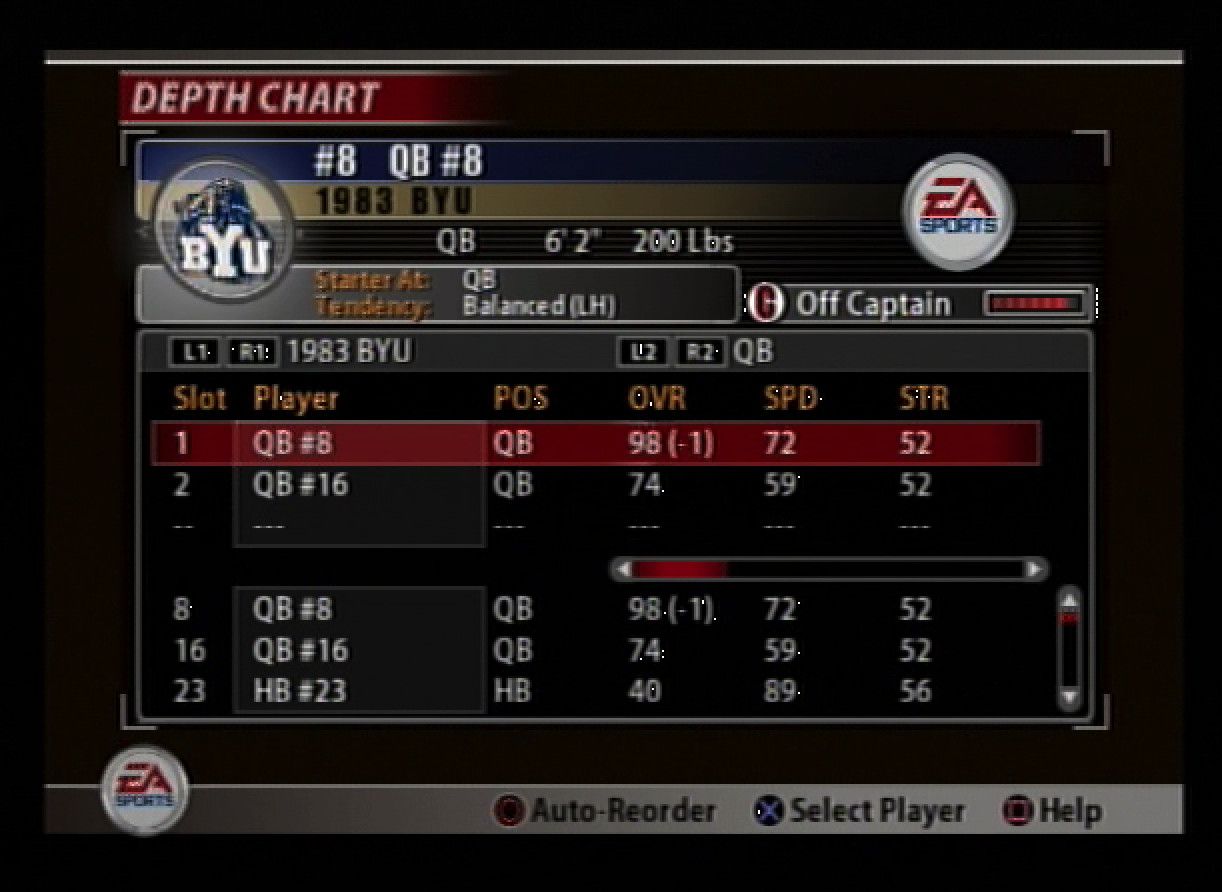 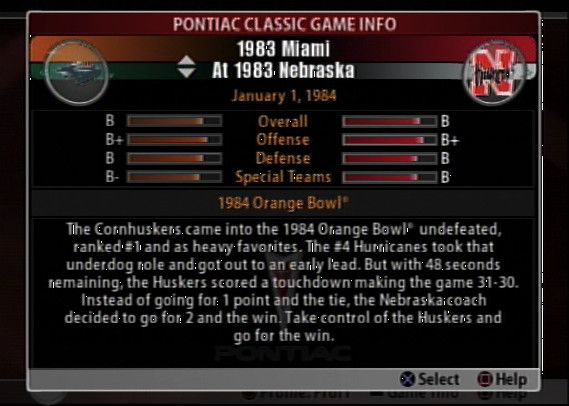 Instead of taking the tie and the certain national title, you go for two, but you convert it. You then have to prevent a loaded Miami from scoring with less than a minute to go. Unlike the basketball counterpart, playing defense is not impossible, and you have a pretty good one, but this is only easy because of the amount of time. 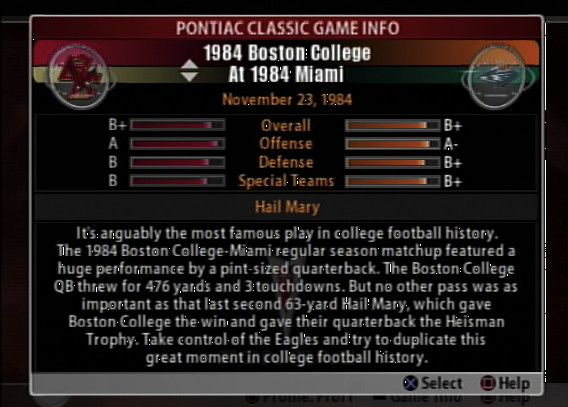 It's just one play, and it's not an impossible throw, given where the line of scrimmage is. The only problem is that it’s a Hail Mary, so this may take you a few tries. This is the easier of the two Hail Mary challenges on here. In Flutie you trust.

This level similar to "The Shot" in the basketball version. 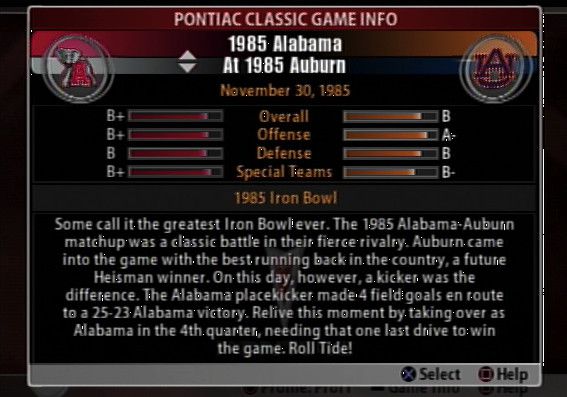 All you have to do is go down the field and get within field goal range.

You have time outs. This level isn't that strenuous when compared to some of the other challenges. It would have been cool to play the Cam Newton Iron Bowl or the “Kick Six,” if the game were still around today, but beggars can’t be choosers. 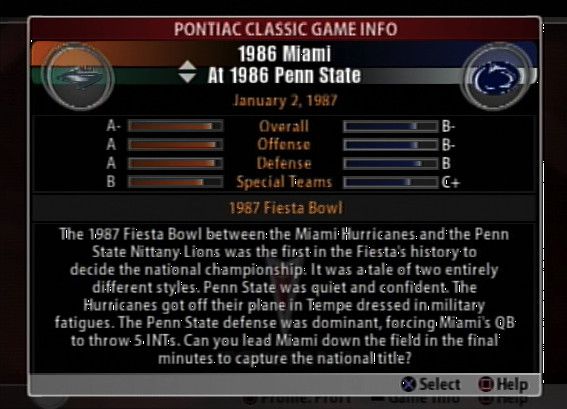 You have five minutes to beat Penn State, and you’re The U. You’ll be fine. Just don’t suck. 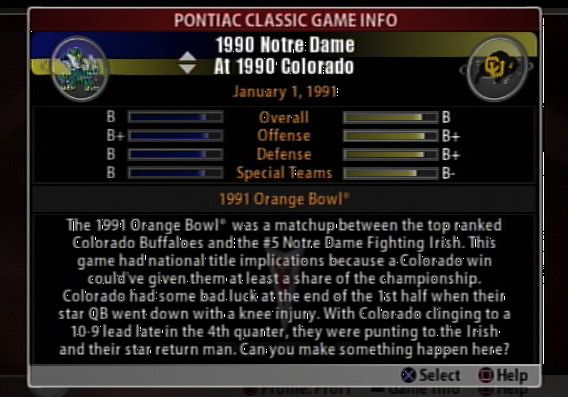 Your job is to get revenge on C̶o̶l̶o̶r̶a̶d̶o̶ the referees for a controversial penalty flag on a Rocket Ismail punt return that would have given Notre Dame the lead and Georgia Tech the title. You don’t have to return the punt for a touchdown immediately, but you do have a limited amount of clock to get within field goal range.

You have 44 seconds and two timeouts to beat Colorado. 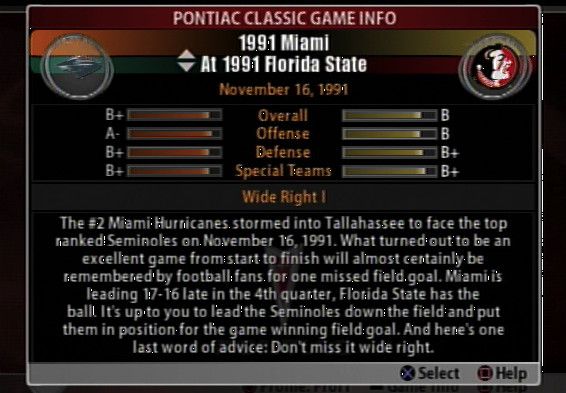 You have around three minutes to beat Miami. Take your time. Relax. You have a very good running back, Amp Lee, and a good wide receiver corps. You'll be alright. Don’t miss the field goal . 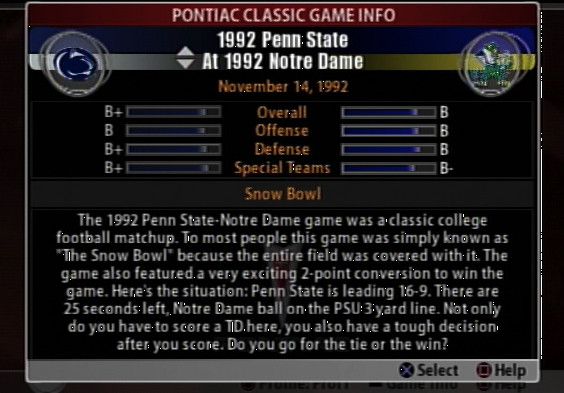 Notre Dame vs. Penn State
Difficulty: Medium (Or easy, and I’m just trash at this level)

This one is more difficult than it appears, for some weird reason. You're on the 3-yard line, but you're going up against a somehow OP (overpowered) defensive line performing a goal-line stand in the snow. Your receiving corps also drops almost every pass.

Once you do score, you should be in the clear unless you are atrocious at defense. When you do score, Penn State has less than 30 seconds and no timeouts to try to win the game.

Game of the Century 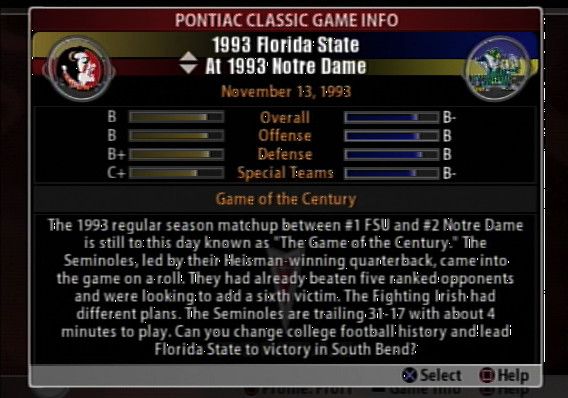 You start out with a fourth-and-20, down two touchdowns.

You're playing as Florida State, trying to reverse the real-life outcome. You have a better chance at winning if you convert on the fourth-and-20, but to each their own. Some people don’t like to live dangerously, and that’s okay.

(I scored the second touchdown and was going to go for the win, but I forgot that you can get celebration penalties.)

The Miracle in Michigan 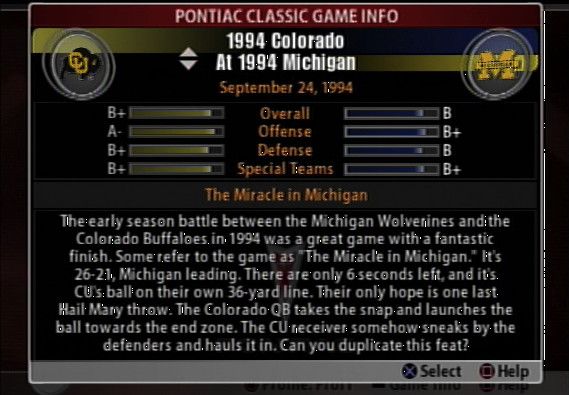 You have to score on one or two plays from the opposing 36-yard line. The main problem with this level is that the video game version of Kordell Stewart can't throw the ball that far.

You might be playing this level for a long time. He literally can't reach the end zone, but that's okay because the receivers end their routes and start to frolic around the field. It's not like that's the most important part of the play or anything.

You can try to hot route the receivers, but Michigan Stadium is so loud that it’s extremely difficult to change the routes.

I actually beat this level on accident, as I pressed a button to throw to one receiver and another receiver caught it instead. I’m not complaining; I’m just saying that might be how you end up winning the challenge. 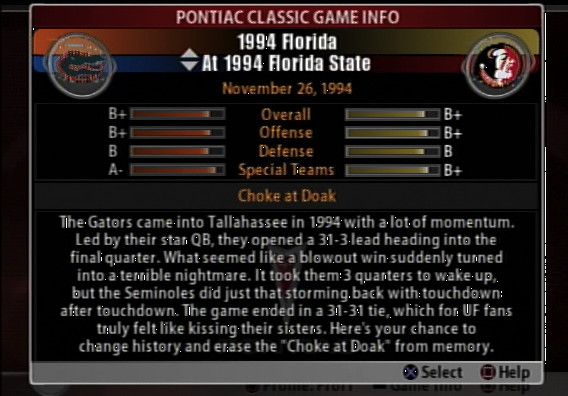 From reading the description, this sounds like this level is going to be hard as hell. But instead of having to complete the 31-3 comeback, you just have two minutes to get into field goal range. This could have been a lit level, but the actual challenge is kind of tame. I understand that playing 15-minute quarters in a video game would be too much, so I’m not mad. 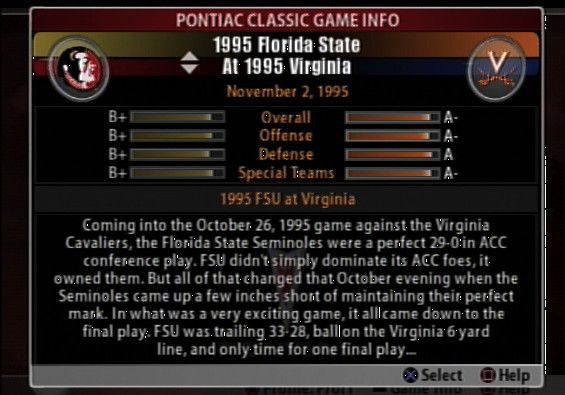 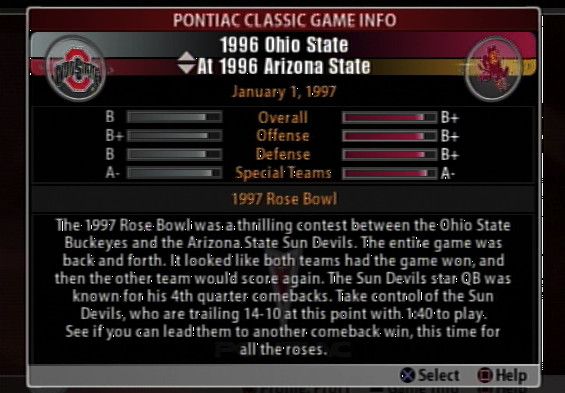 You start out on third-and-goal at the 11-yard line. Score a TD and don't let them score. Simple as that. 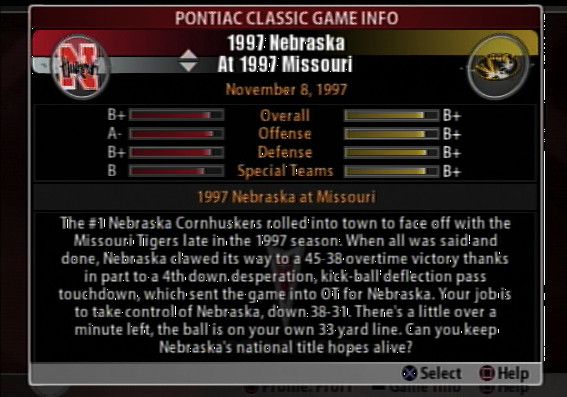 You have one minute to go 60-plus yards with receivers that drop the ball (and fumble numerous times, when I was playing). This was sneaky difficult. This would have been basically impossible if you had to replicate the actual Flea Kicker play, though.

The best game ever played in The Swamp 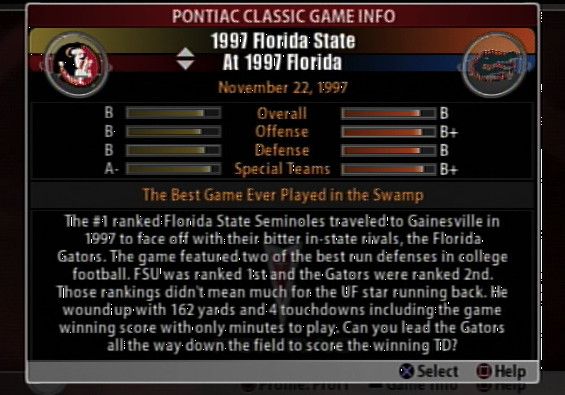 You have enough time to make a calm, two-minute drive to win. You have a pretty good running back in Fred Taylor as well. Use him. 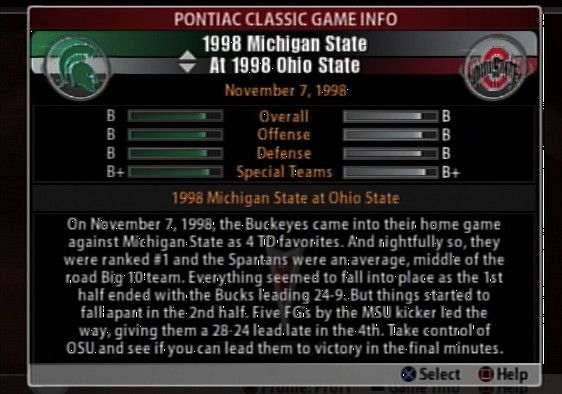 With 1:39 to go 51 yards, this isn't that hard. You have a chance to erase Ohio State’s only loss of that season. 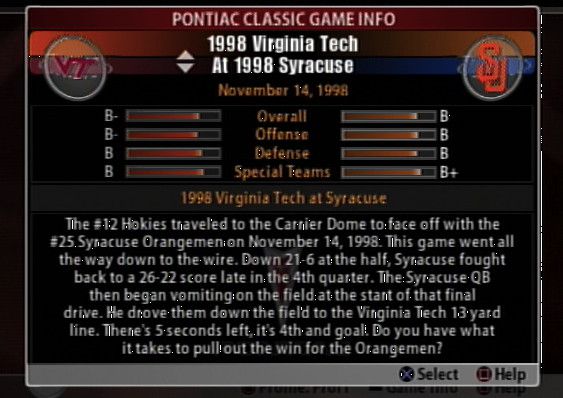 Syracuse vs. Virginia Tech
Difficulty: Medium, but difficult if you hate passing

Fourth-and-goal at the 13. It’s just one play, but the pressure's on! You have Donavan McNabb (84 OVR) at the helm, so you're not doomed. I’d suggest five-WR or tinkering with the depth chart, because this is what it looks like when you start the level. 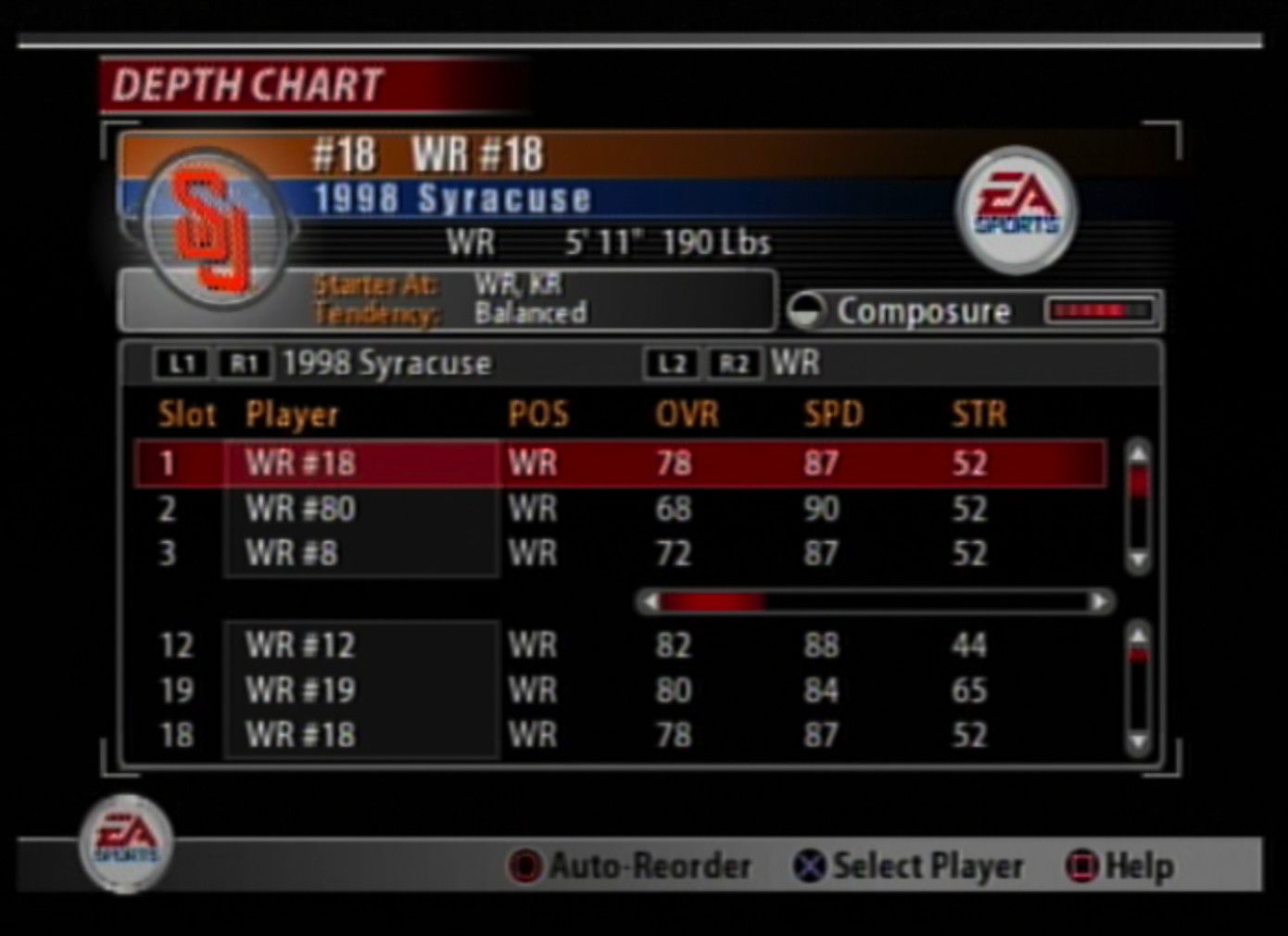 You only have one shot to gain 13 yards, so the play call is super important. Be clutch. Be cool. I believe in you. 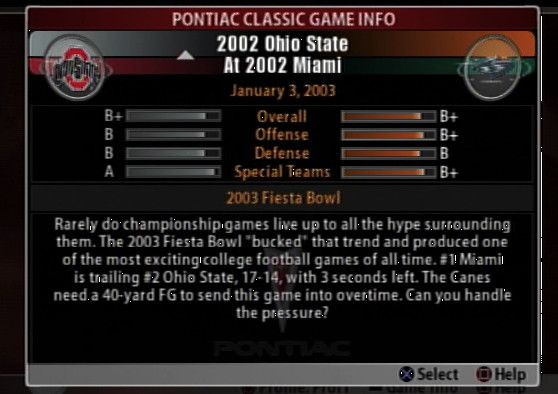 You can either tie the game with a field goal and hold Ohio State off in OT, or for some reason, go for the win, because this is a video game and you can do whatever the hell you want with the team that you control.

Just kick the field goal and take your chances in overtime.

When you compare this College Classics game mode to the basketball edition, most of the difficult levels reside on the football side. Regardless of difficulty, both are still very enjoyable to play even years later. It’s a truly timeless game mode that provides both a challenge and sense of nostalgia.

If the College Classics mode (and football game) was still around what moments would be highlighted?

It hurts that there would be so many options to choose from, but it’s not possible to play them at the moment.

While we can’t do anything about its the future, luckily the games past are still around. If you are a fan of video games and sports history, the College Classics game mode should hold a special place in your heart.

College Classics, you are dearly missed.