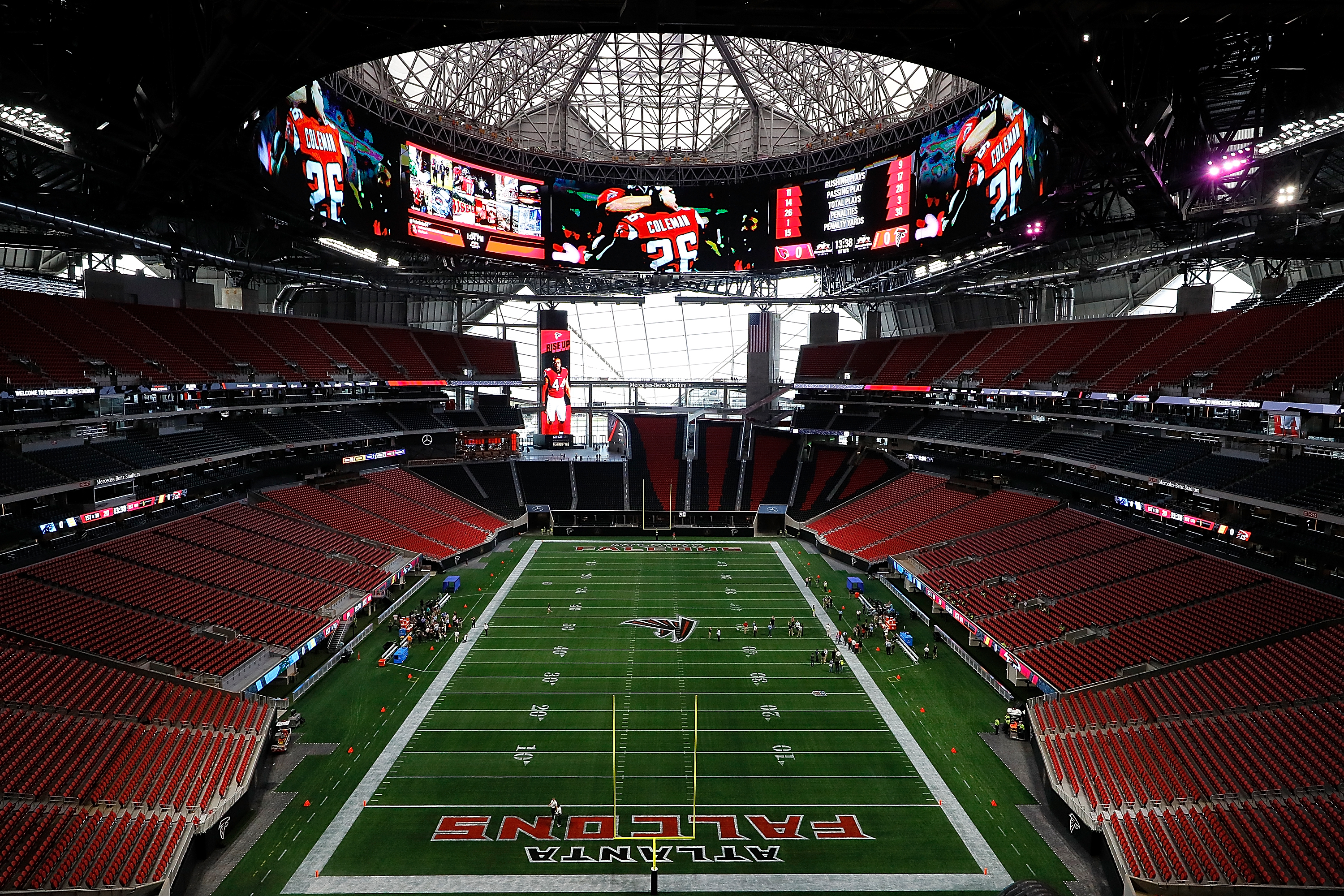 The brand new Mercedes-Benz Stadium in Atlanta won’t just be the home of the Falcons and the United. It’ll also play host to some of college football’s biggest games each season, starting right away in 2017.

The first college football game in the new stadium has been pegged as the sport’s biggest opening game ever, with No. 1 Alabama facing No. 3 Florida State on Saturday, Sept. 2nd.

The Falcons’ new digs will also put on the SEC Championship, the Peach Bowl, and December’s HBCU national championship each season, plus other neutral-site openers.

The 2017 National Championship will be played here, too. This year also includes Georgia Tech vs. Tennessee on Labor Day.

Between Bama-FSU and the three FBS postseason games, it’s entirely possible that a single new stadium is hosting four of the season’s 10 biggest games.

"I would venture to say we’re going to be the most visible collegiate football facility in the country this year," stadium general manager Scott Jenkins told SB Nation. "And then just the attention that this building’s going to get, and being where we are in the south in Atlanta, which is such a football hotbed with the SEC and ACC around here. It’s exciting to have that as a steady part of our events that we offer."

Even without that massive schedule, the new Mercedes-Benz Stadium is on a whole other level.

Look, the Georgia Dome did its job for 24 years, but it wasn’t anything special. That’s not the case with this stadium. Walking up to it feels like you’re approaching a damn spaceship. 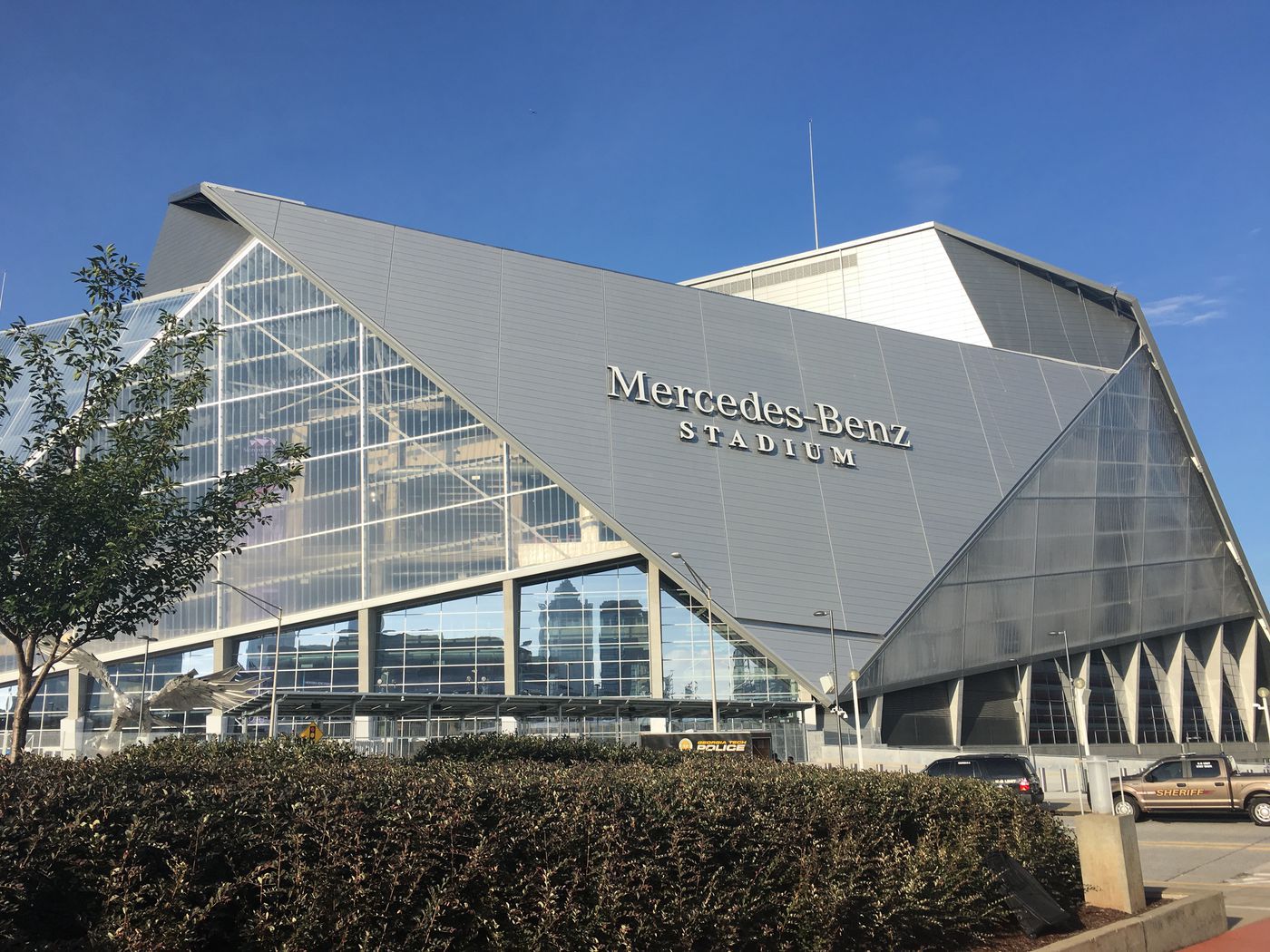 The roof is retractable, which caused construction delays due to its intricacy.

Most of the construction was completed with the roof open.

"We built the building to play outside, so unlike some stadiums that have retractable roofs, we really wanted to look and make this feel and act like an outdoor stadium," Jenkins said. "So we are completely weatherproof. So we can take rain, and football season here in Atlanta is a perfect time to be outside."

The roof will remain closed for the beginning of the football season, but teams will later have the option to open or close it, weather permitting, per stadium execs.

This halo board, dubbed as the world’s largest scoreboard, hovers above the field and provides 63,000 square feet of screen.

It’s longer than the Eiffel Tower, and then some. "If you took the halo board, which is 1,100 feet around, and stood it straight up, it's taller than the tallest building in Atlanta," McKay said. "That's the Bank of America. It's taller than that building. So it's a very large board. And it's really cool." 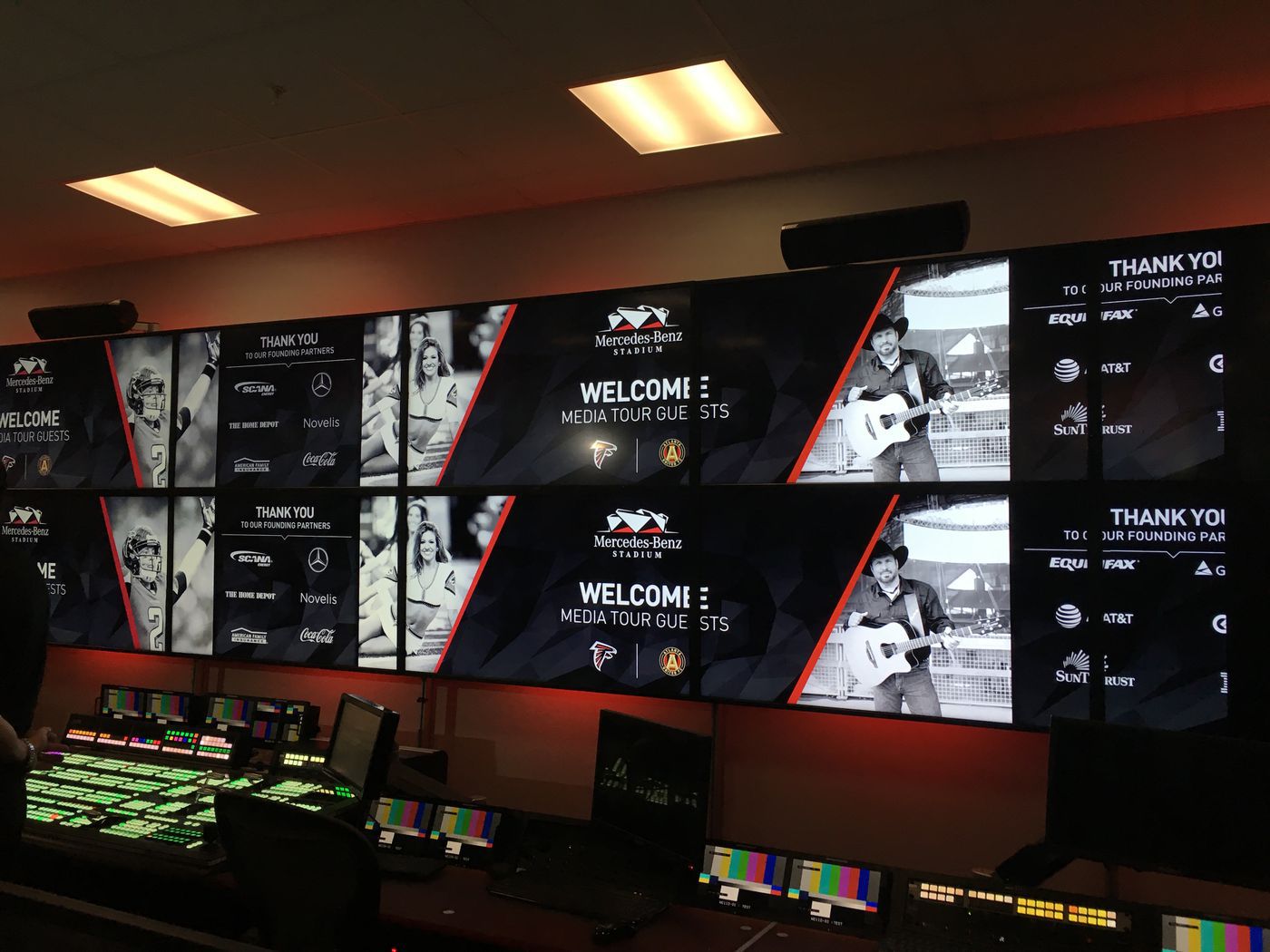 That’s not the only massive video element. The north side of the stadium includes a 100’-tall "mega-column," a pillar wrapped in LED screen on three sides. 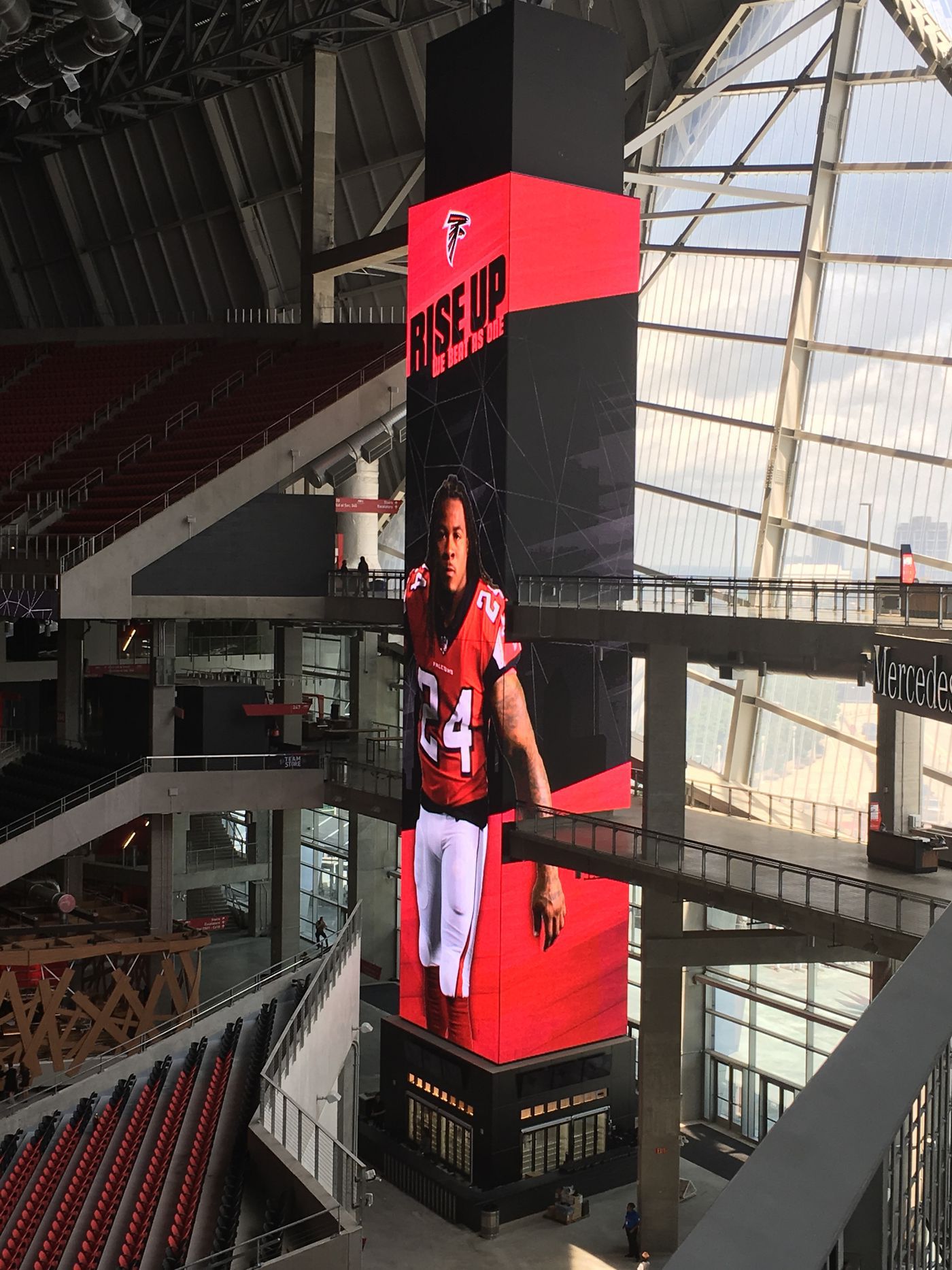 It "brings one side to the window to the city, that gives us this really cool element of being able to put a player up there that’s a hundred-foot-tall, to complement the halo board and the ribbon board," Jenkins said. "It’s quite a visual show."

On the middle concourses, there are "sky bridges" with sweeping views of downtown Atlanta. 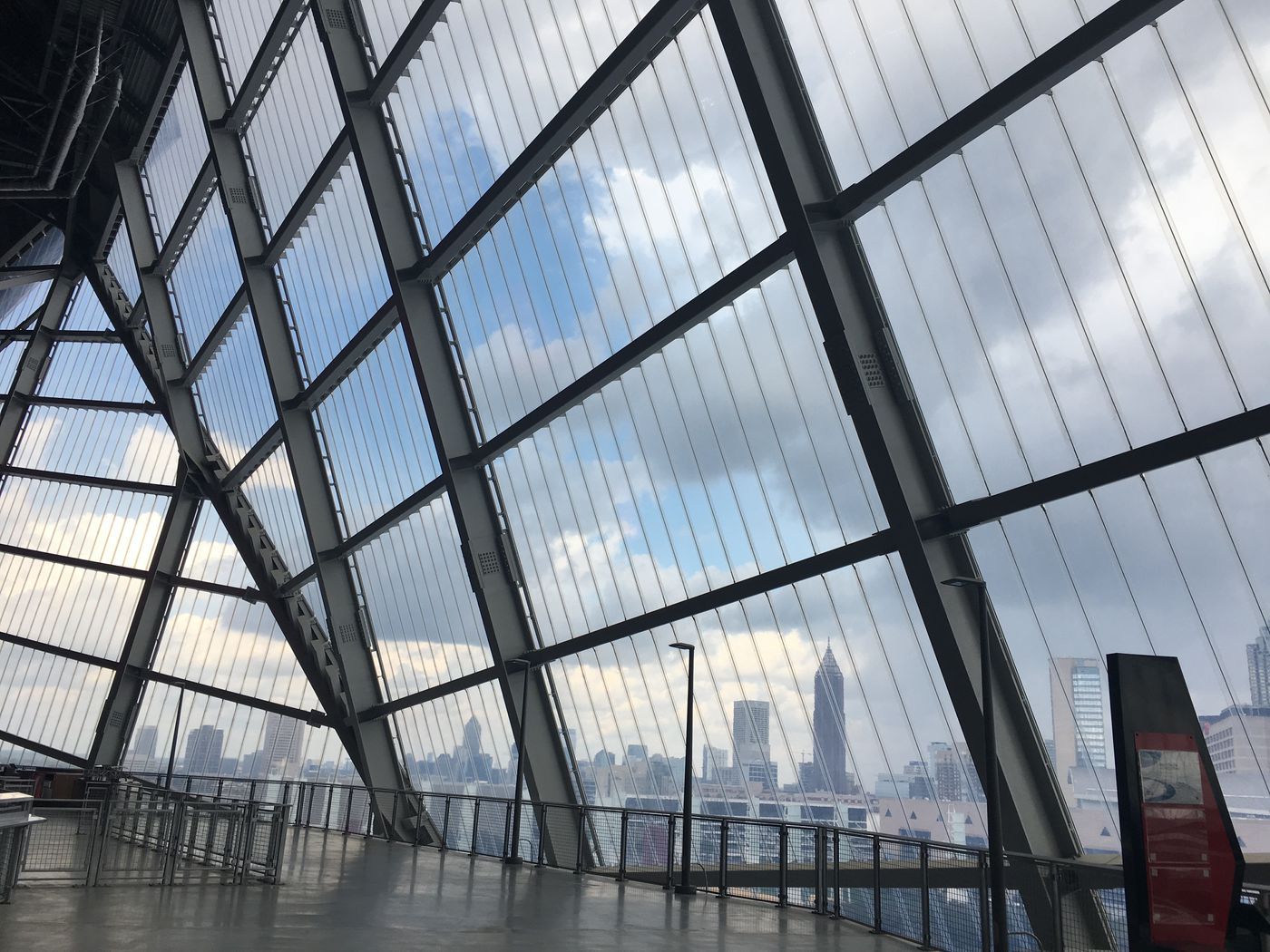 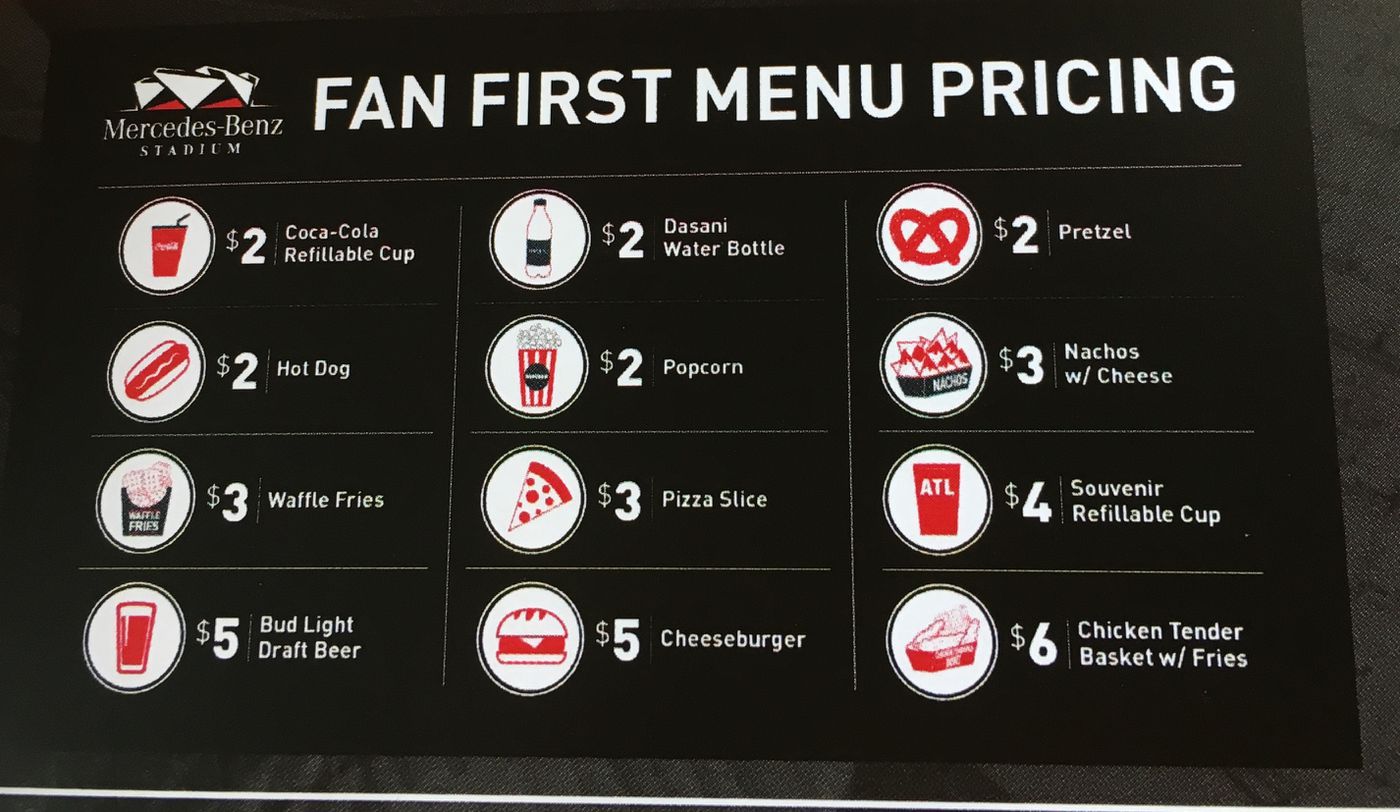 "When you can come to an NFL stadium or a Major League Soccer stadium and be able to feed your family, a kid, for $10, and get a hot dog, a refillable soda, a popcorn and a pretzel, and right there you’ve only spent $8," Jenkins said, "I don’t think there’s a sports venue in the country that can say that."

There are 1,264 beer taps and Atlanta restaurant options on every concourse, too. Ever wanted an adult slushie that is "loaded with Tito’s vodka?" Kevin Gillespie's Gamechanger has you covered.

Yes, there’s a Chick-fil-A that’ll be closed during games on Sundays but open for college football games and other events. Besides, I sampled the chicken sandwiches at West Nine and Gamechanger, and they were absolutely delicious. 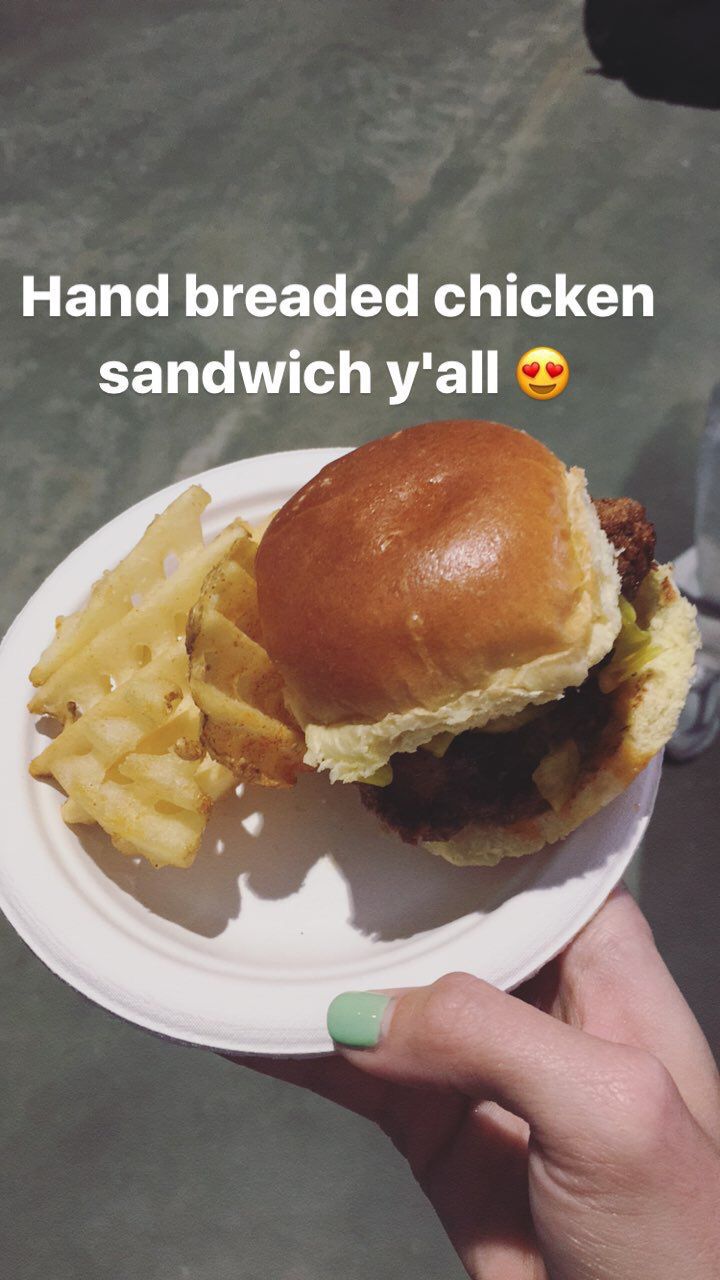 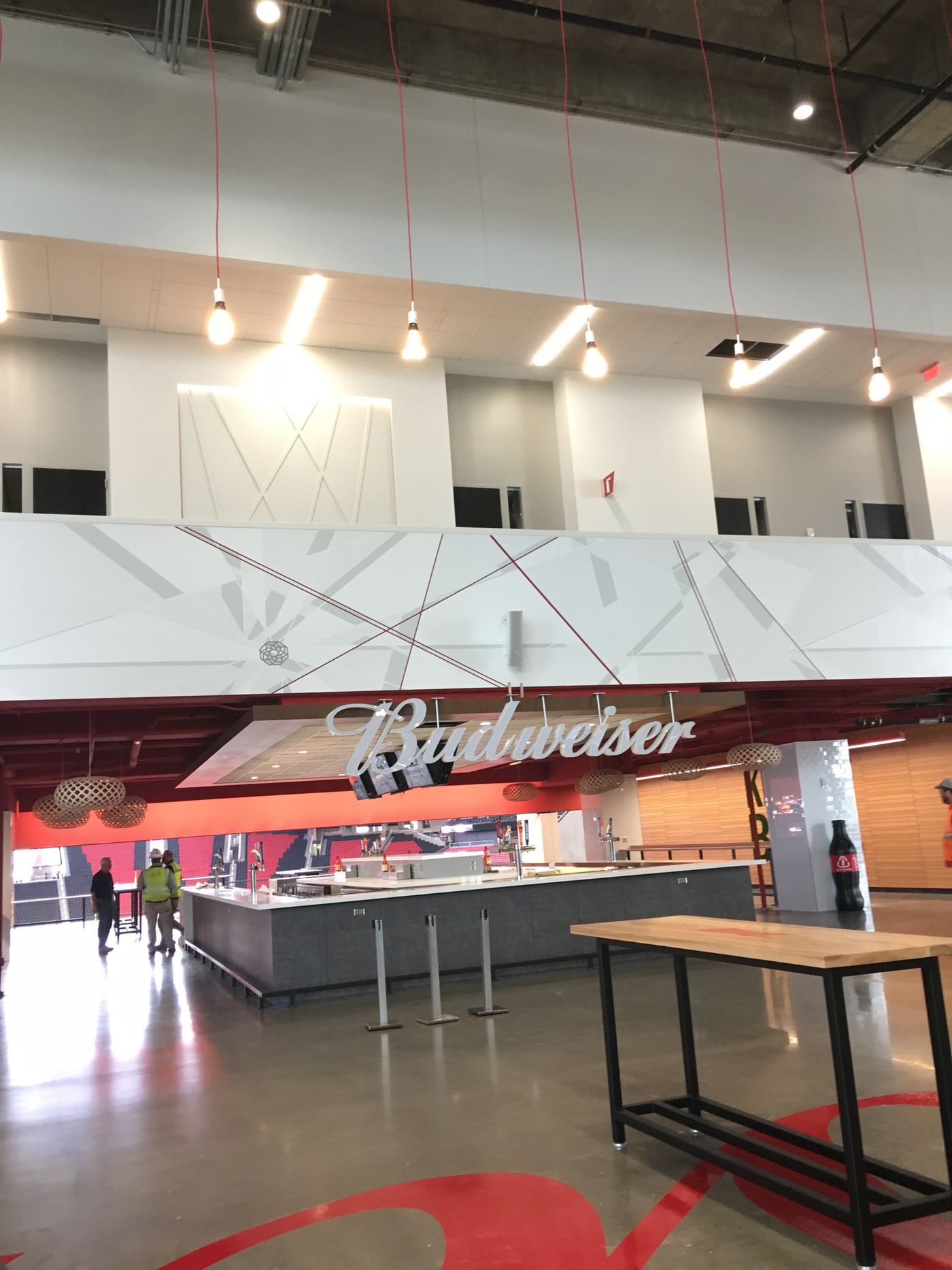 The stadium is high-tech, both inside and out. 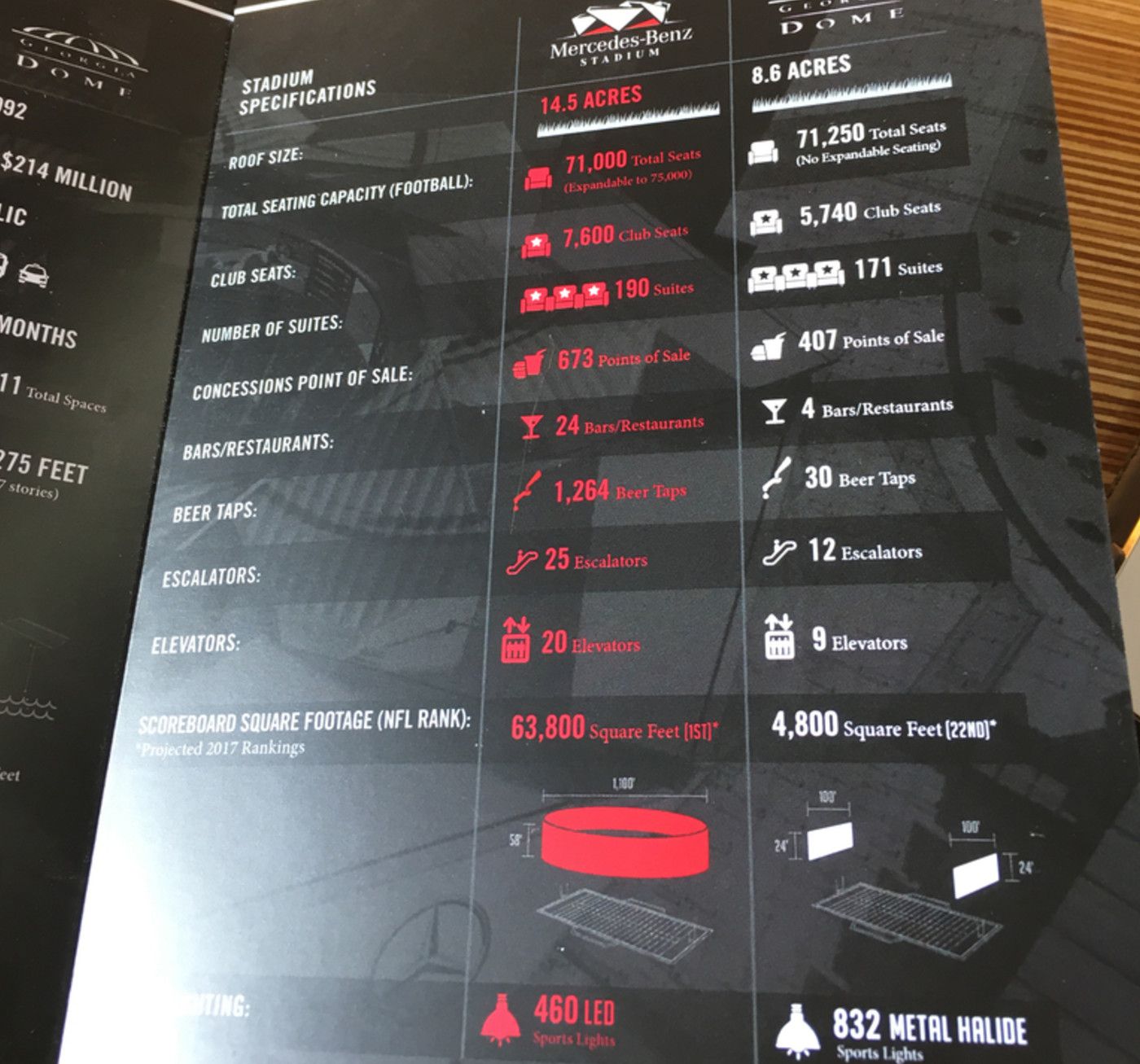 It has 4,000 miles of optic fiber, powering everything at the speed of light. In addition to free, fast WiFi throughout, the building has over 2,500 TVs, so fans won’t miss a second.

"We’ve got 1,800 wireless access points in the building," Jenkins said. "So there’s 1,000 of them in the seating bowl and another 800 in the concourses, so no matter where you are in this building, 70-some-thousand fans will have fast, wireless connectivity. And then whether you’re on WiFi or your on your cell phone with cellular service, we’ll have a distributed antenna system that’s throughout the building, that’ll give you great service through various carriers."

Its 4,000 solar panels can generate enough solar energy on its campus in a year to power over nine Falcons home games or 13 United home matches. The stadium will also reuse rain water that the stadium collects.

"We’ll use about 47 percent less water, through our design of the building and our capture and re-use of rain water," Jenkins said. "So the rain water that hits the site, will be stored in a 680,000-gallon cistern, and we’ll use that water for make-up water for our cooling tank and to irrigate the landscaping." 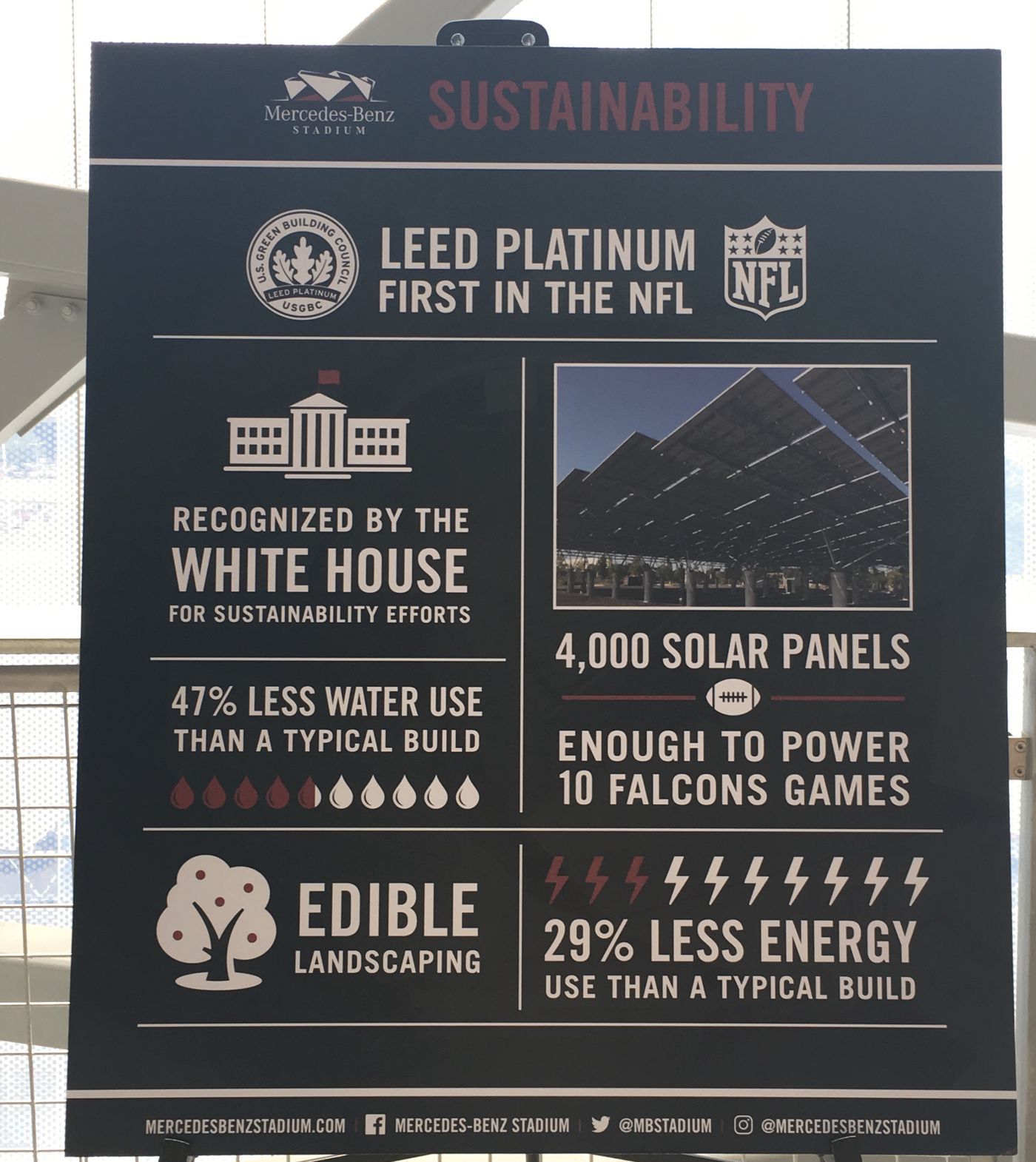 The Southern stadium was designed with college football heavily in mind.

"In our mind, we wanted the tenants that were going to come in here and play to feel like this was their home field, this was their stadium, and that's how we designed it," McKay said. "We added two extra auxiliary locker rooms, which were gigantic in nature, really for the SEC Championship. They are both 100-locker locker rooms. We did it because we felt it was a good way to host major events; that way they didn't end up in some temporary, visiting locker room.

While the Georgia Dome was good enough, the intent of the new stadium was completely new and different.

"It was a really functional building that served its purpose very well, McKay said. "We did not want to build a better Georgia Dome. That was not the object. If we would have done that, we would have renovated the Georgia Dome. We really wanted to change the game and do it for a long, long time."

"Every decision we’ve made has been squarely with the fan’s perspective of, ‘How do we take the fan experience to the next level?’" Jenkins said. "The LED displays we have. Whether it’s every seat is two-inches wider than the Georgia Dome. Almost all the concourses connect so you can circumnavigate the building; you don’t get cut off. You can move vertically throughout the building. We have really wide staircases, we have twice the elevators, twice the escalators compared to the Georgia Dome."

Fans can also enjoy the Front Porch, a 61,000-square-foot outdoor plaza, with live entertainment, food, and beverages before, during, and after the event. The AT&T Perch area has TVs with food and drink options and phone-charging stations. 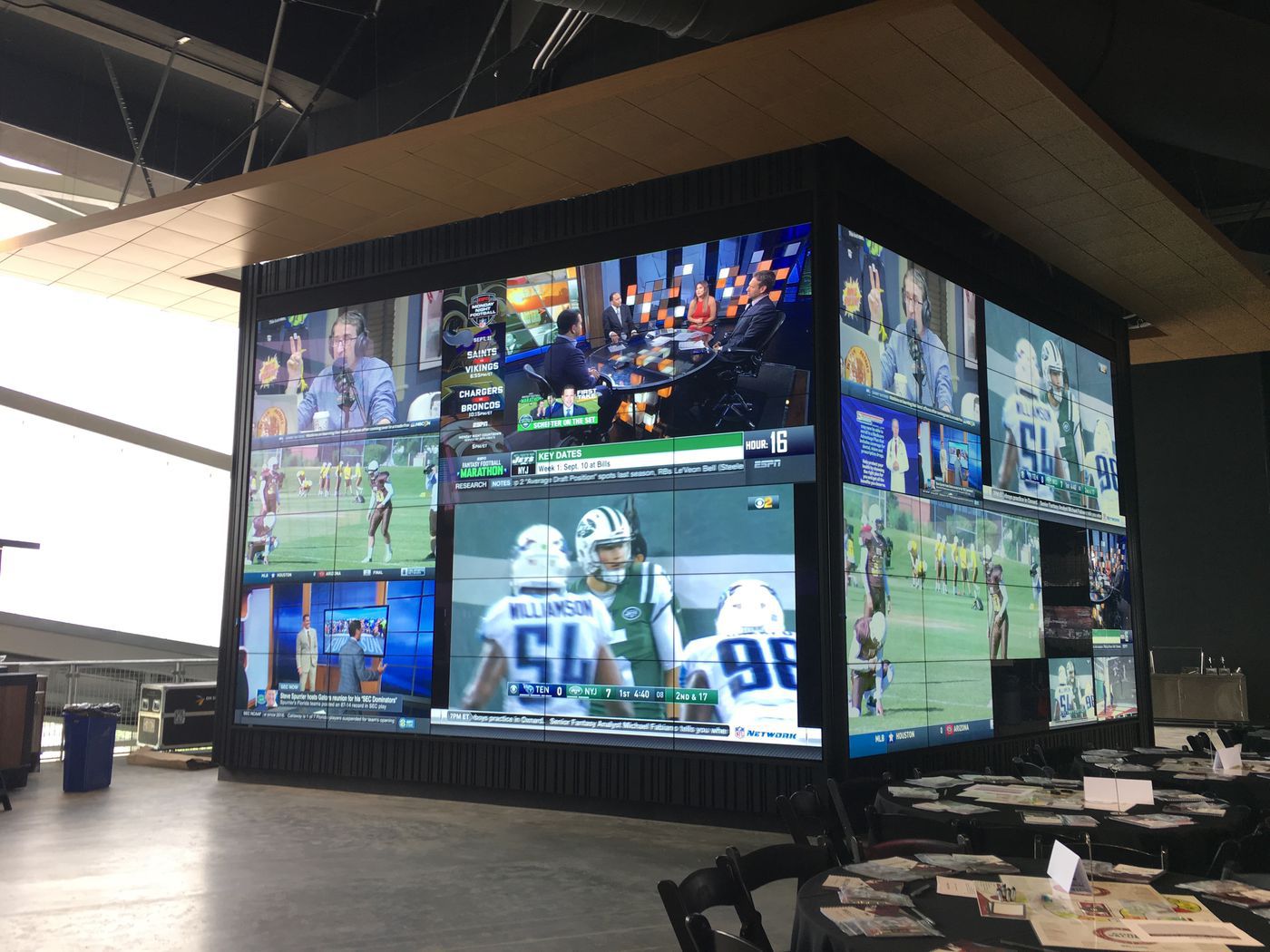 "At the end of the day, it impacts the guest experience and our ability to deliver a world-class experience, and we’ve made those investments from the beginning and we’ve done it intentionally," Jenkins said. "Having done a number of sports facilities in my career, I can tell you this project is different than every other one. What’s made it hard is we’ve put the bar higher than anybody’s ever put it."

This new stadium nailed the goal of modern sports venues: make a game a social experience. Quality, affordable, varied food and drink options paired with a number of fan-first initiatives will make for an excellent stadium experience ... all in a spaceship.