Pac-12 power rankings: Can anyone interrupt the USC-Washington collision course? 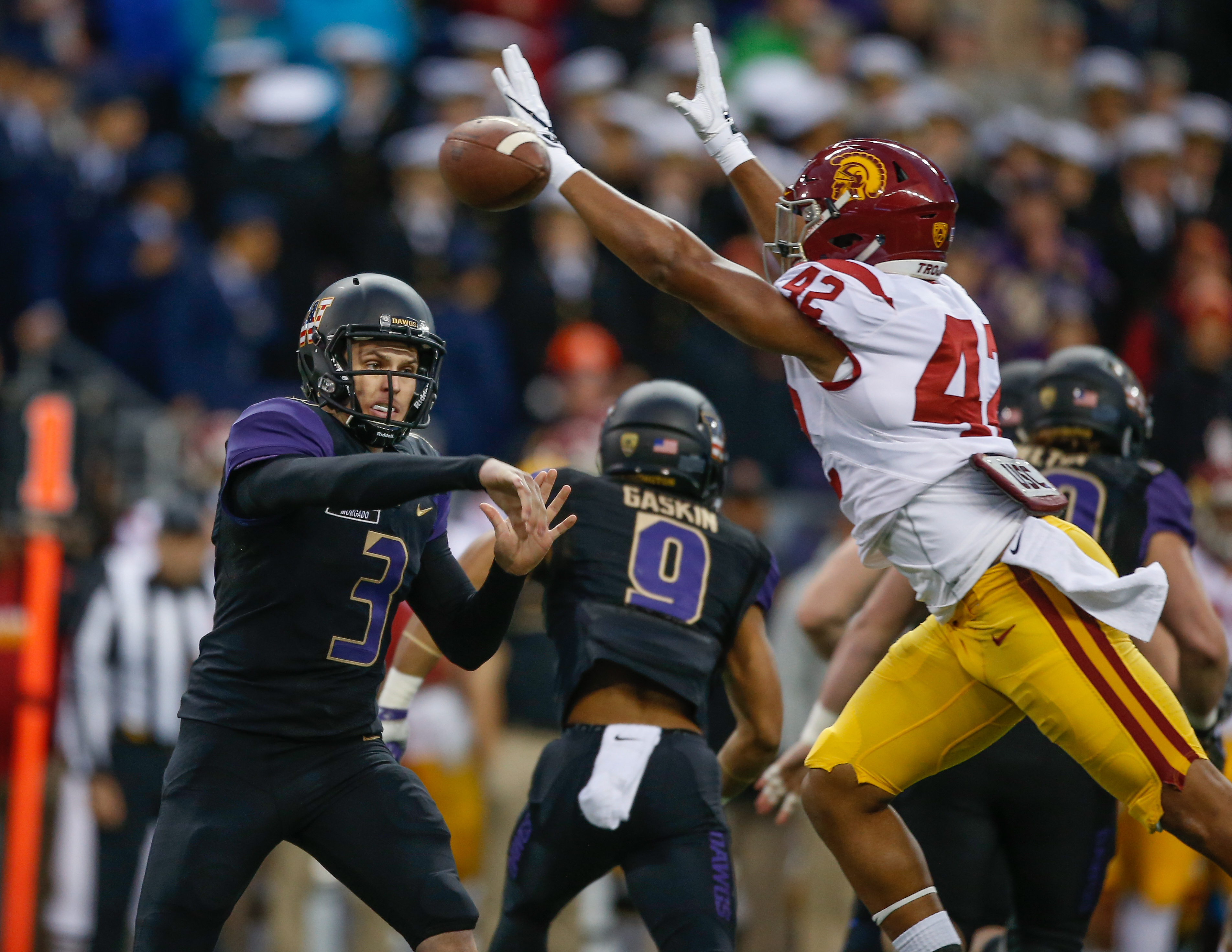 We don’t have to proclaim the Trojans are back. They already did that last year.

In this week’s Podcast Ain’t Played Nobody, Steven Godfrey and I were joined by Mitch Light, managing editor of the Athlon college football previews.

Athlon ended up ranking Washington fourth in its preseason top 130, USC fifth. Light said this was one of the tougher decisions they had and that UW head coach Chris Petersen almost served as a tie-breaker of sorts.

There is indeed very little separating these two teams at this moment. The two were barely separated last year, too, with Washington finishing seventh in S&P+ and USC finishing ninth. But I went with the Trojans instead of the Huskies in the top spot for a couple of reasons:

These power rankings aren’t based on projected records, only projected strength. But one other thing does bear mentioning if we indeed talk about the conference title race: Washington has at least one stiff challenger. USC might not.

The Cardinal might be a year from greatness ... and win the Pac-12 anyway.

S&P+ actually projects Stanford a little bit ahead of UW, and the Cardinal play host to the Huskies in November. I’m concerned about their depth in the trenches, and while Keller Chryst showed massive potential late in the season, he’s still less of a sure thing than either Darnold or Washington’s Jake Browning. That puts them behind the top two in my eyes, but they’re still ahead of everybody else.

If anyone other than USC, Washington, or Stanford wins the conference this year, it will be a pretty big surprise to me. That means Stanford gets a tier to itself.

Can Willie Taggart fix the Ducks as quickly as they fell apart?

This is a Mike Leach team in every way.

The Buffs are facing life after a dream season.

The Bruins have all the pieces for a Pac-12 rebound. But they did last year, too.

The Beavers are getting somewhere, but they face a nasty schedule.

I basically set these power rankings up as ladder matches — on a neutral field, who do I trust to win, Team A or Team B? If it’s A, A goes ahead of B.

Sometimes I surprise myself. I certainly did here, in finding that I trust UCLA quite a bit less than S&P+ does. Last year’s offensive collapse is lingering, and the run game was so awful that not even quarterback Josh Rosen’s return to health, plus a perfectly solid new offensive coordinator hire, can rebuild that trust. These six teams are all bunched together pretty closely, but head coach Jim Mora and his Bruins have a lot to prove.

The Wildcats are checking every box on the Program Collapse Checklist.

Todd Graham can build coaches, but what about a program?

Cal can progress in Justin Wilcox’s first year, but this schedule is ... damn.

About the Big 12, I found myself saying that the conference’s bottom half had a legitimate chance to improve this year. I think the same of the Pac-12. Both Arizona schools bottomed out last year and should rebound, but they still have plenty to prove. And Cal doesn’t feel like a last-place team to me at all; they’re last mainly because I didn’t know who else to put there.

This could be a case where the conference only ends up with three real top-25 level threats but has no one ranked below about 60th or 65th overall. It could also be a case where someone goes 3-6 in conference and finishes last in their division. 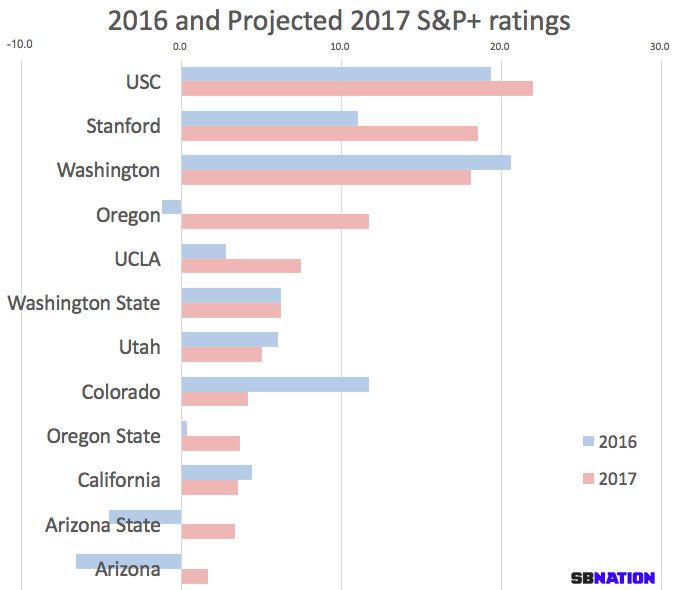 For obvious reasons — last year’s surge being a little too much, the secondary and defensive line getting rebuilt, etc. — Colorado is projected to regress a decent amount. I would be shocked if that weren’t the case, though the magnitude of the Buffs’ regression will tell a lot. Meanwhile, with excellent recruiting rankings, UCLA is of course projected to rebound. Oregon, too.

You can tell from this chart that there’s quite a bit of bunching in this conference — the top three are all pretty close together, as are basically No. 6-11. As you might expect, that results in some potential bunching in the standings, too.

Imbalance! Four of 12 teams are projected to win at least five conference games, and three of them are in the North.

Clustering! Five of six South teams are between 3.3 and 4.1 projected conference wins. Somebody will take the close games and overachieve that projection (knowing recent history, Utah’s probably the safest close-games bet there). And we could have as many as eight Pac-12 teams uncertain about their bowl status well into November. Could be fun ... as long as you’re not a fan of one of those eight teams.

This does suggest one thing pretty clearly: USC is your Pac-12 favorite. Even if the Trojans and Huskies are dead even on paper, USC is far more likely to make the title game and is therefore the safest bet to win it. 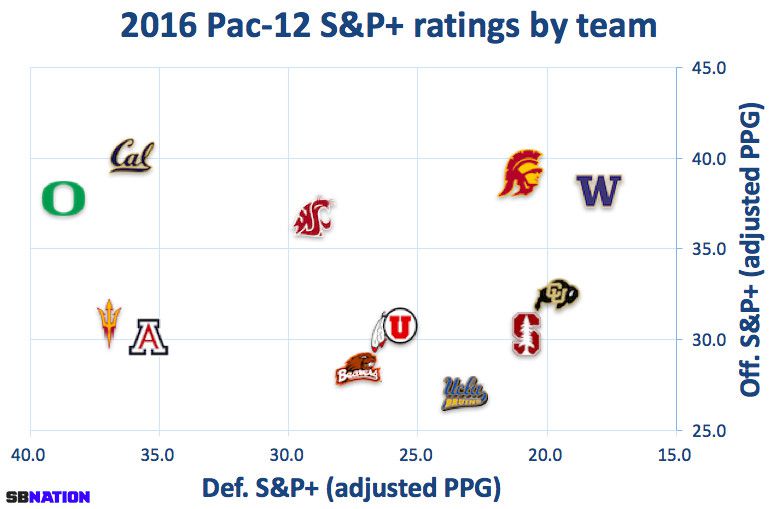 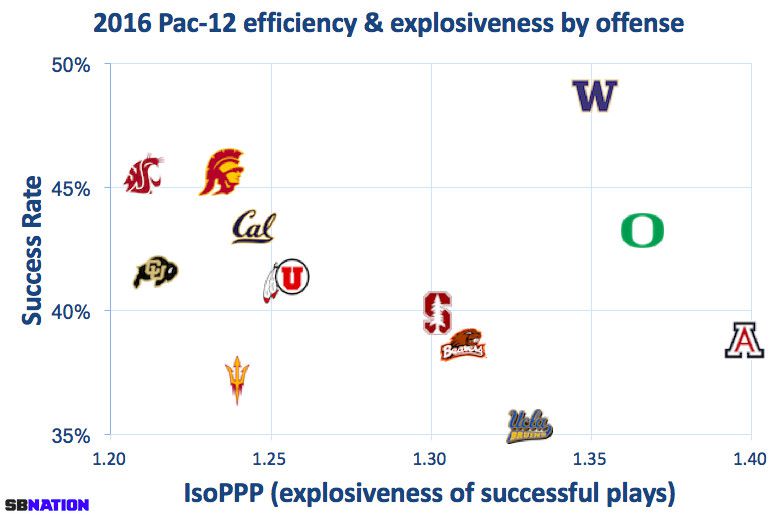 USC and Washington State were both drastically reliant on efficiency and were pretty big-play deficient last year, while Arizona was the opposite. Consider this your reminder that it’s far better to rely on efficiency than big plays. You never know when big plays will come and go, even when you’re good at creating them.

Wow, is this a quarterback- and running back-heavy league. In other conferences, I’ve ended up with a pretty balanced list of QBs, RBs, receivers, and linemen. Not here. 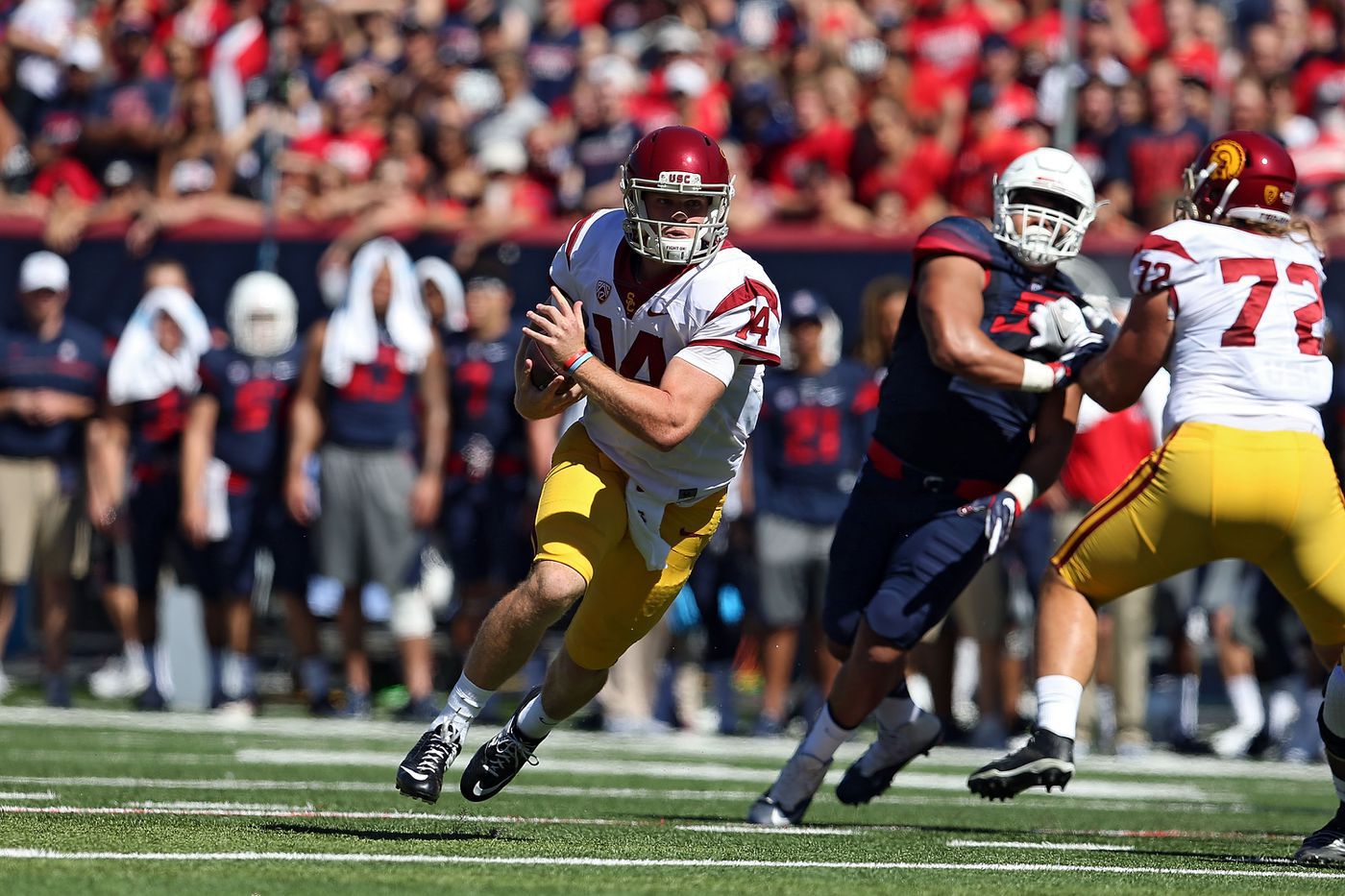 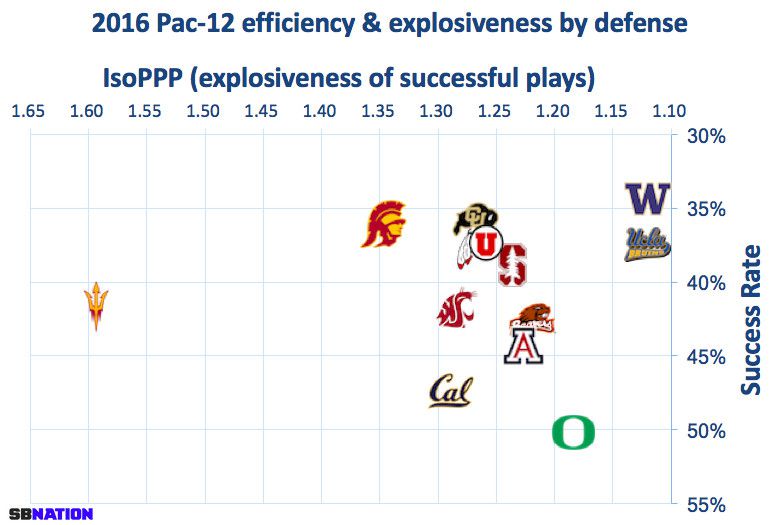 Arizona State was so incredibly awful at big-play prevention last year that it wrecked the scale of this chart. It also almost made Oregon look like a decent defense. Oregon did not have a decent defense last year, and a 50 percent success rate allowed is miserable. Don’t let the scale fool you.

I’m a sucker for the big dudes. 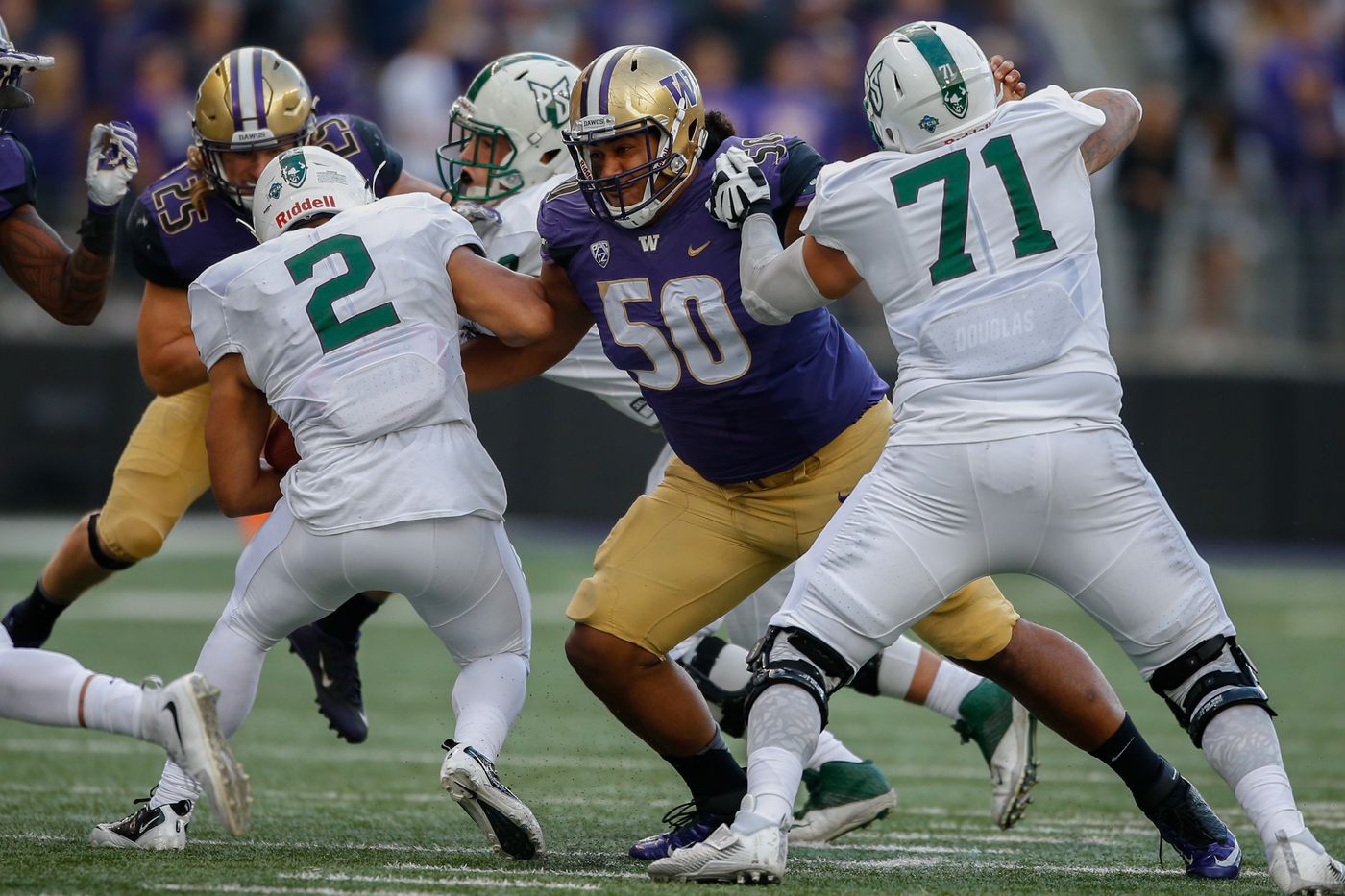