Is P.J. Fleck the next generation’s Jim Harbaugh? 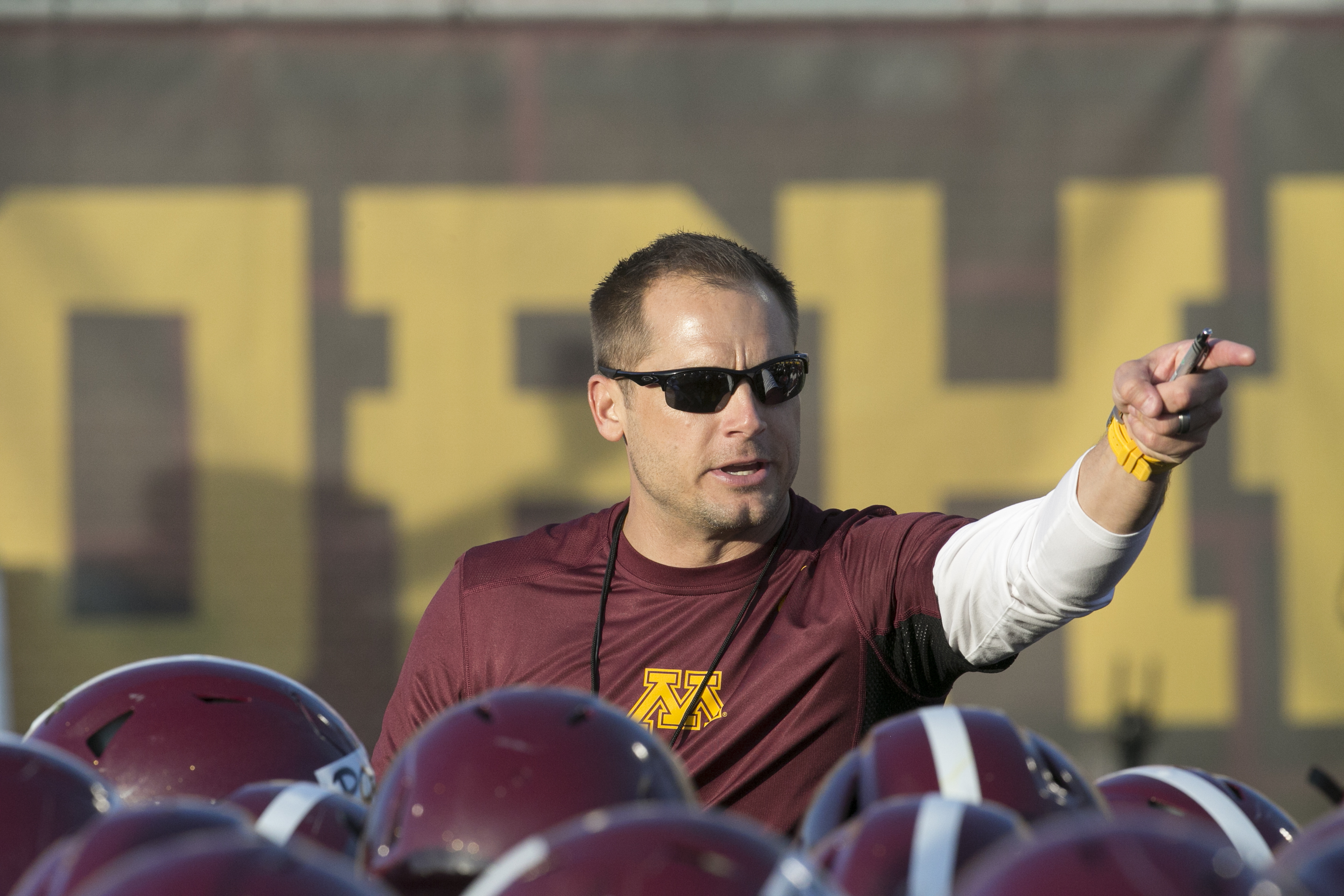 P.J. Fleck wants to go outside.

We’re in Chicago in July, the day before Fleck and three of his Minnesota players are required to face cameras and recorders for hours.

But Fleck spent his Monday morning shuttling around this hotel anyway, bouncing between interviews. He’ll start his next morning by literally running through the city with a Big Ten Network writer, and ESPN’s been around for weeks, shooting a documentary series.

Minnesota’s sports information director has asked him if he’s sure he wants to do all of this. Fleck has insisted that he does. We meet around 3 p.m., and Fleck’s only request is that we head out into the fresh air.

If you dressed a can of Red Bull in maroon, you’d get Fleck.

You probably know Fleck speaks in slogans all the time. The most famous is "Row the Boat," which came to national prominence as he led Western Michigan to a 13-1 2016. He talks a lot about being Elite and building the right Culture. 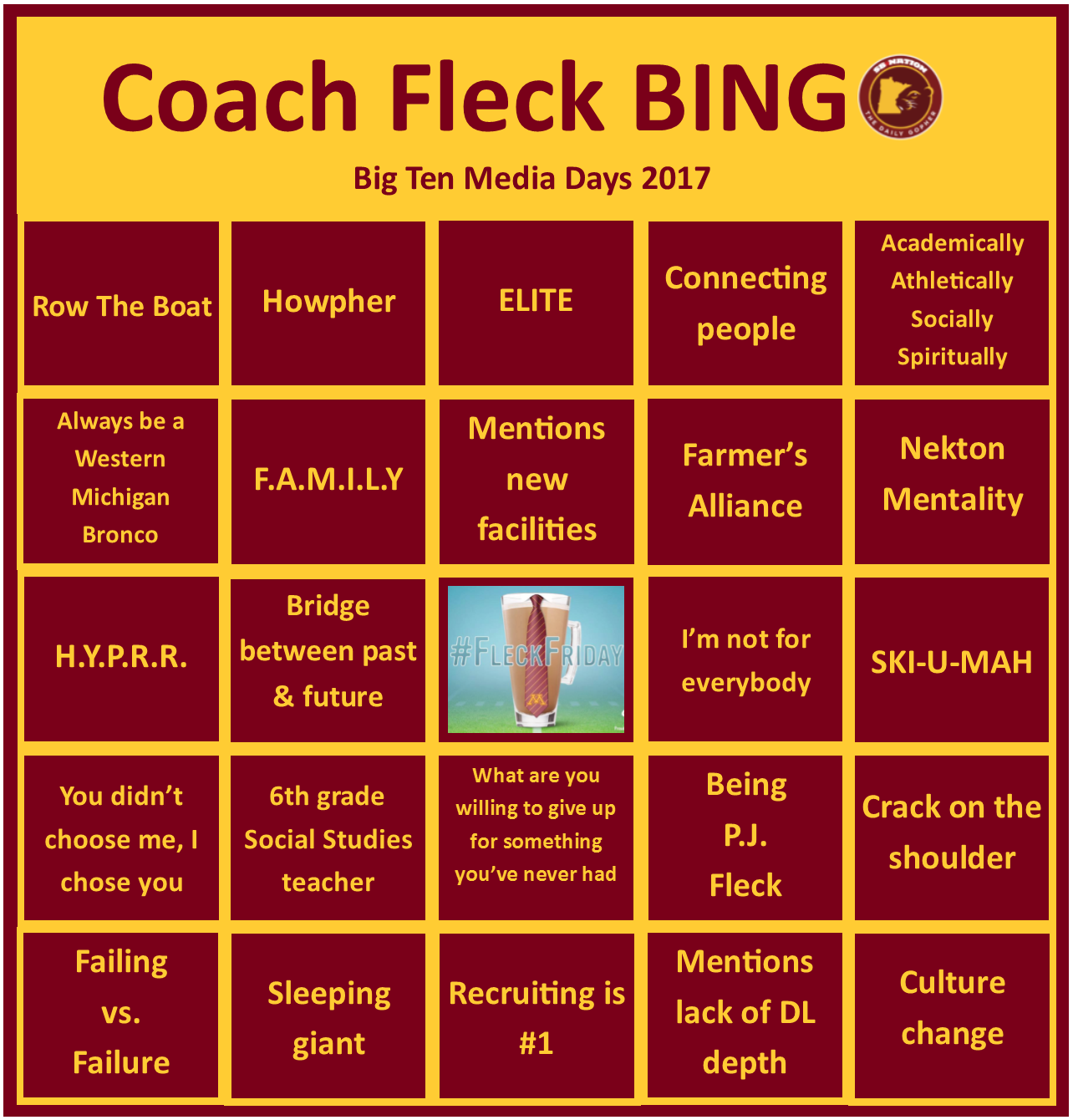 He exudes more energy than anyone else in this high-energy profession.

"He’s always like that," linebacker Jon Celestin says. "Every time I see him, I have to wake up just to make sure I’m on his level."

"All the time," running back Rodney Smith says. "Doesn’t change."

Fleck’s belief in his mantra is total. In 2011, his newborn son, Colt, died shortly after his birth. That’s when Fleck came up with Row the Boat. Coping by continuing. It eventually worked as a leadership and marketing tool for a football program.

When Smith heard last winter that UM had hired Fleck, the first thing he saw was a video of Fleck sprinting down a sideline.

Fleck’s path to this point calls another Big Ten coach to mind.

It’s not only that Fleck and Jim Harbaugh are super-intense Midwesterners in a reserved Midwestern league.

"I think comparisons steal your joy," Fleck tells me. "Just in society in general, when we’re always comparing ourselves to somebody else, we want a better car, we want a bigger house, we want more money, we want this. Comparisons, you’ll never outdo the one that’s always at the top. You know, you’re never gonna outdo that one. So for me, I don’t compare myself to anybody else."

As Fleck rose in Kalamazoo, Harbaugh was about 100 miles east. The two sometimes crossed paths at clinics.

When Harbaugh got to Michigan, he rattled SEC cages by pushing into the South with satellite camps. The NCAA briefly banned them, but they’ve survived in a limited form. Harbaugh took Michigan to Rome this year, and not coincidentally, the Power 5 conferences will ban such trips going forward.

In Fleck’s first summer in the Twin Cities, his staff’s legal use of a loophole caused the NCAA to close it right up. Minnesota included a recruit in a video that marketed one of its camps, and it was allowed because the player was merely participating in camp activities. The NCAA issued an interpretation that recruits couldn’t be "celebritized" in such materials.

"I’m not here to ruffle any feathers. I’m just here to run a program and do it in a first-class fashion that promotes the University of Minnesota and gets us the most exposure we possibly can."

Harbaugh’s willing to, this offseason alone, yell out pre-snap QB calls in the middle of a media scrum and go on stage and sing opera in Rome.

Fleck’s willing to put on a helmet and full pads and ram into one of his players.

At the end, Sylvester Stallone appears. He tells the walk-on Fleck had been sparring with that he’s earned a scholarship.

Here’s a shirtless Fleck jumping into frigid water at the Kalamazoo Polar Jump in February 2013:

Hanging from a locker room pipe:

And using coal and diamonds to pump his guys up before a game:

Fleck has fun, but everything is geared toward community-building.

"If I would just go up and hand a kid a scholarship, he’d remember that for the rest of his life, but Johnny who sits six seats down is not gonna remember that," Fleck says. "So creating these moments and memories that — they’ll always remember Sylvester Stallone. The whole team will remember that day, not just Kasey Carson, who got the scholarship. Everybody.

"Not only that. You and I are talking about it right now. That’s very impactful."

In a preseason scholarship reveal at Minnesota, he used a T-shirt gun to fire the kid’s scholarship at him during a team meeting.

Fleck was an elementary education major at Northern Illinois, where he was an All-MAC receiver before a brief NFL career. Fleck then taught sixth-grade social studies.

His favorite subject to teach was ancient Rome.

"You could get into groups, build your own cities, wear togas, make it a true Culture."

Some of Fleck’s moments are planned out, but he thrives on spontaneity.

The guy who’d been keeping a binder of his head coaching influences since at least three years before he was a head coach is the same guy who showed up to Big Ten Media Days with a shaved head, the product of a lost bet to his wife, Heather.

"Always listen to your wife, because she’s probably always right." 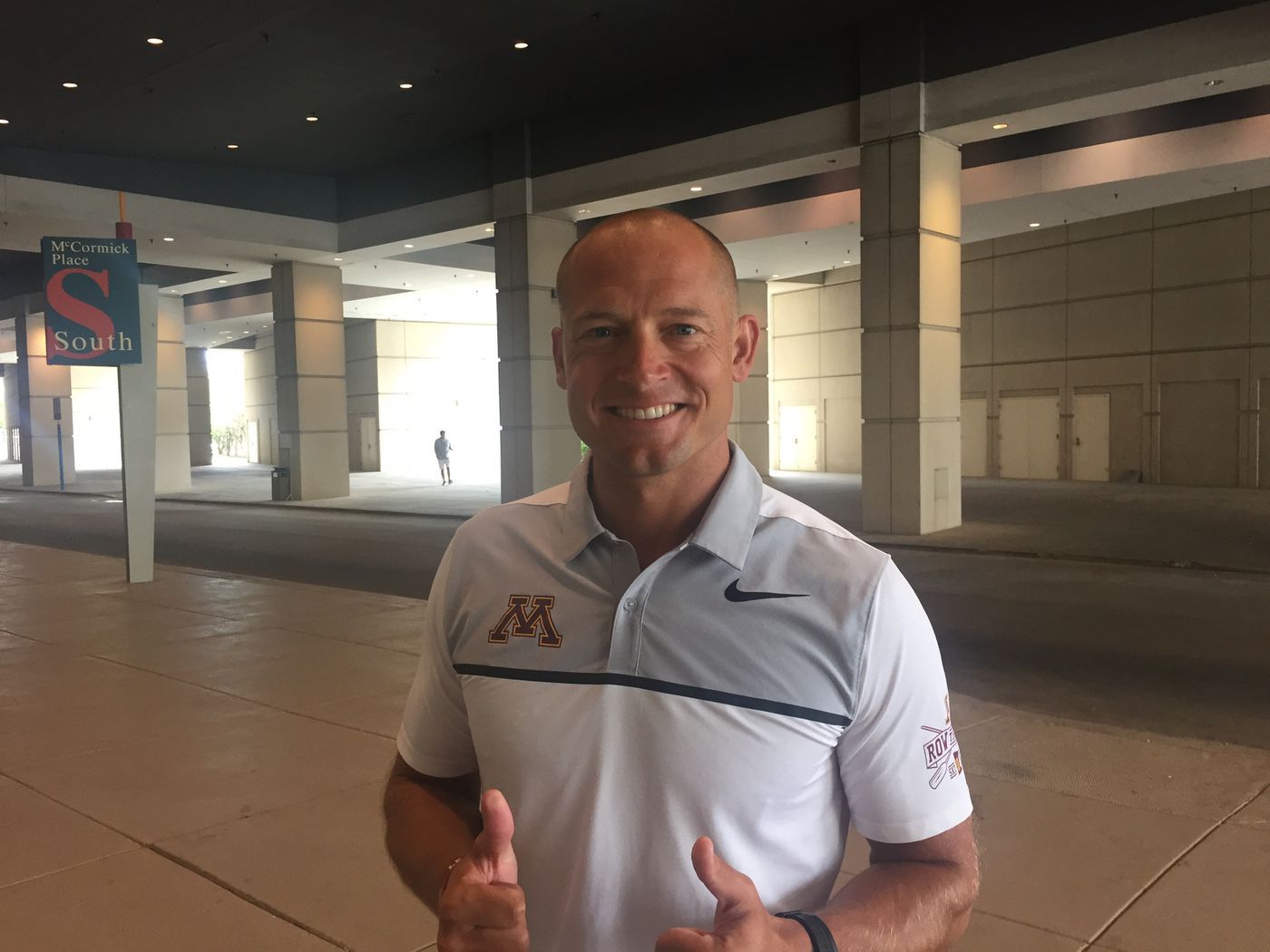 "She’s always said she never wanted me to be a head coach one day that is 10 years past wanting to be able to cut his hair," Fleck says. He expects to grow it back.

"It’s just something I decided to do with my boys. Shave their head, shave my head, let’s go to Disney World. You know, it was one of those things."

Fleck’s four-year-old daughter, Paisley, "thinks she’s a princess." While the family was at Disney, she was eager to have dinner in Cinderella’s castle.

"But her schmuck coach, or her schmuck dad, I should say, didn’t make the reservation until three months in advance, which — I thought that was early: 90 days in advance," Fleck says. "Shoot, you only have to give an employer two weeks’ notice."

Fleck’s already faced challenges at Minnesota. The next one: winning games.

The Gophers were the quietest nine-win team in the power conferences last year, ending with a Holiday Bowl win against Washington State. Fleck’s successor, Tracy Claeys, lost his job after publicly backing a threatened player boycott over the school’s handling of a sexual assault case involving several players.

For much of the roster, Fleck will be a third head coach in three seasons. He’s inheriting both success and turbulence. Harbaugh took over a similarly mixed bag at Michigan in 2015.

Of the Big Ten West’s middle four teams, Minnesota’s ceiling might be higher than anybody’s outside of Nebraska, but its floor for 2017 is probably the lowest, too. And a fascinating schedule features five games with S&P+ win probabilities between 39 and 54 percent each. There are few guaranteed wins and few guaranteed losses. A small number of injuries could make the difference between West contention and a 4-8 record.

Still, the Gophers spent almost all of 2016 in contention for the Big Ten West. They’ve made 14 bowls in the last 18 years.

They just haven’t won the conference since 1967.

"I love the Big Ten, grew up in the Big Ten," Fleck, a Chicago-area native, says. "But it was the challenge of taking something that hasn't happened in 50 years and creating that legendary feel back to the Twin Cities. And you can only do that if you haven’t done something for so long. So that’s why I came here."

When Fleck arrived at Western Michigan in late 2012, the first reason he cited for taking the job was a MAC championship drought since 1988. In 2016, he ended it.

To get here, Fleck’s already traveled a long road.

"I just remember meeting a guy that definitely had goals and was driven and wanted to go places and do things, and just really did an hour or so of grilling me to get every piece of information that he possibly could," Fitzgerald says now. "You could just see his drive at that time."

"You manage machines. You lead people," Fleck says Fitzgerald told him. "And that quote’s always stayed with me."

Fleck became a graduate assistant for Ohio State’s Jim Tressel (Fleck’s sideline necktie is a tribute to Tressel and former 49ers coach Mike Nolan), then coached receivers at NIU, Rutgers, and with the Bucs. Fleck realized the college game was his thing.

"I think it was I wanted the opportunity to run our own program and develop our own Culture and affect and change so many lives," he says. "And when you’re an assistant in the NFL, you don’t have a lot of opportunity to do that. And that was always my passion. Remember, education, elementary ed, taking kids from where they might not think they can go to where they’ve always dreamed of becoming, that’s really special."

This is a key point where Harbaugh and Fleck differ. Harbaugh took the Michigan job in large part because he was a Michigan Man all along. He didn’t decide one day that he wanted to be a college coach in general.

Fleck is a convincing pitchman for his new home.

He mentions Minnesota’s count of Fortune 500 companies (he says it’s 18, which is correct) and the Mall of America. He loves that UM’s working on expensive facility upgrades after years of lagging. He loves the Timberwolves’ trade for Jimmy Butler, already saying "we." ("We made out really well. Get him matched up with Thibodeaux. We’re all set.")

"It wasn’t like they blindfolded me and I showed up at this particular job, and they unfolded me and said, ‘Hey! It’s Minnesota!’" Fleck says. "I picked it. I wanted it. I wanted the challenge, and I wanted to be able to give our state that hope and that spirit that they have. I’ve been around the whole state in the last few months, and I’ve felt that from our fans."

We’re walking inside, and seconds later, Fleck will walk back out with another reporter.

"I think one of the best lines they tell me is just, ‘Coach, just win a Rose Bowl before I die.’ I tell ‘em, ‘Well, how old are ya? How healthy are you?’"