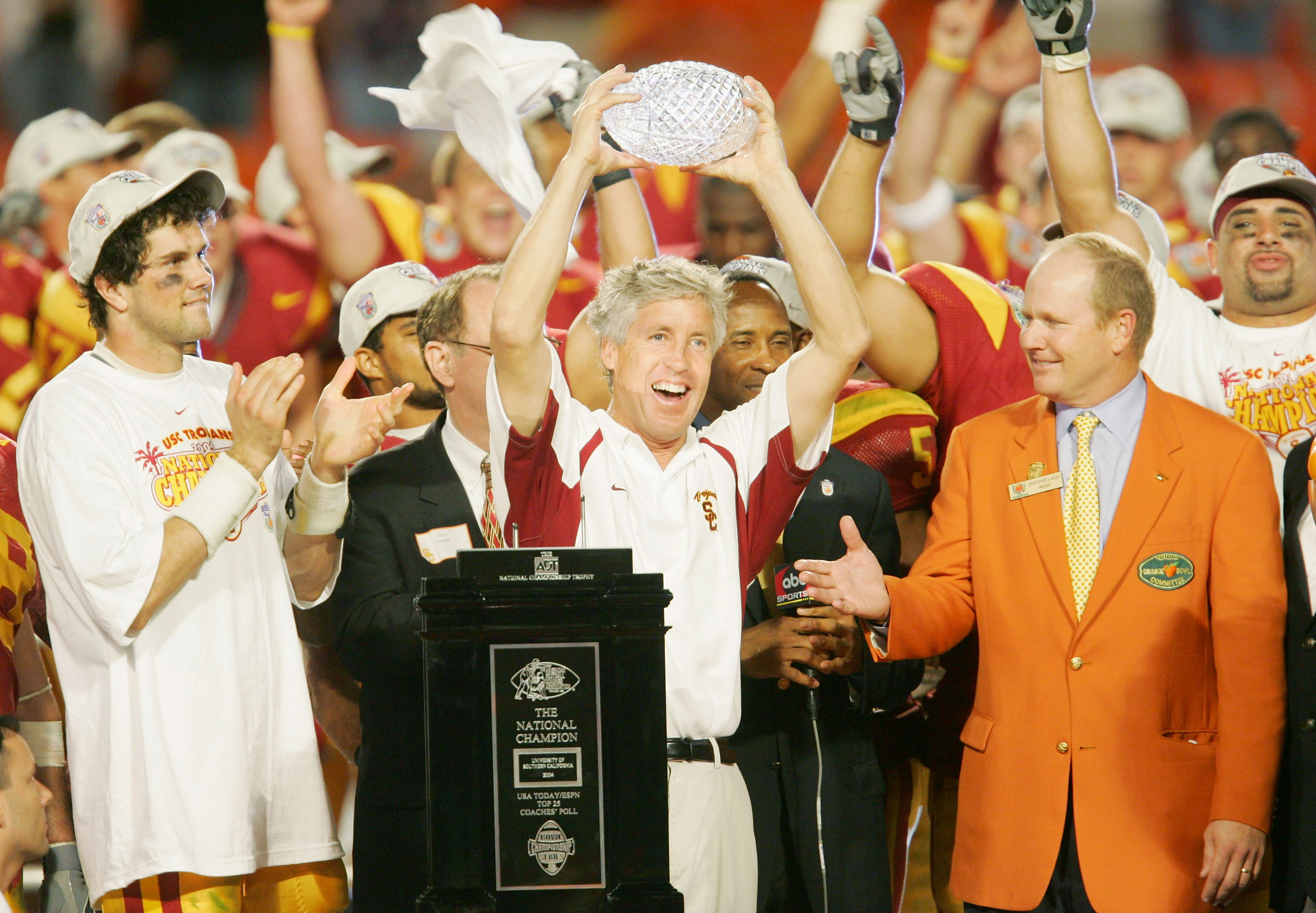 Two things recently hammered home this point for me.

First, I was chatting up the college position coach of an All-Pro linebacker and made the comment that it has to help him in recruiting. Surprisingly, he said not much.

“They don’t know shit,” he said of current recruits. “And I don’t think they read about the past greats, or watch replays of them like we did, either. They don’t watch as many games going on now, either. If we don’t tell them, they don’t know.”

Some recruits, like five-star linebacker Shane Lee, have told us that they don’t even watch current football on TV.

The second is this tweet exchange from four-star receiver Ja’Marr Chase, of Metairie (La.). 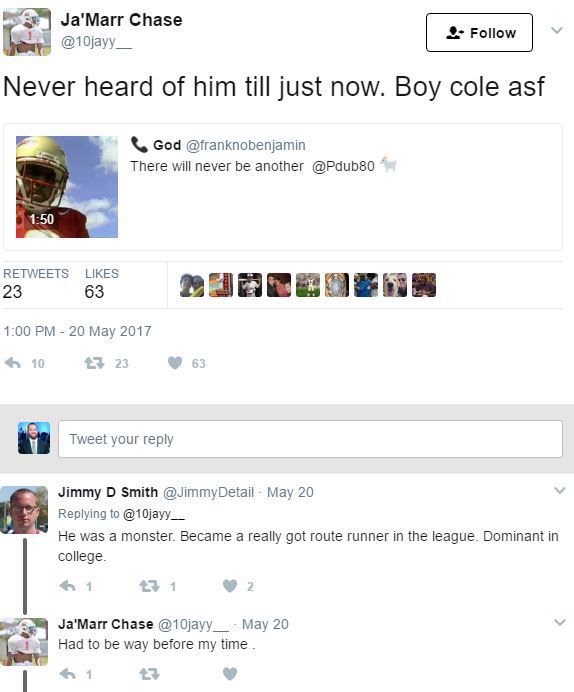 Yup, an elite receiver recruit had never heard of FSU legend Peter Warrick and was seeing him for the first time thanks to a highlight video. He then guesses that Warrick played “way before my time.”

In that regard, Chase was right. Warrick, one of the best college players of the last two decades, played his entire college career before between 1996-99, before Chase was born.

Colleges go to great lengths to market their tradition, but there is no substitute for a real memory of having seen a player or team succeed live. Let’s look at college football history through the eyes of current recruits.

College football in the lifetime of a current recruit

For most reading this, those things did not happen all that long ago. But these things happened anywhere from two to 20 years before current recruits were even born.

They are too young to remember watching Oklahoma, Miami, and USC win titles.

Kids don’t really remember things from when they are small, thanks to a phenomenon known as childhood amnesia. Some research suggests this exists for memories formed up until the age of 7 are generally lost. But to be safe, let’s focus on what happened before they entered elementary school.

From a college football perspective, a lot happened between 2000 and 2004. Miami, Oklahoma, and USC ended title droughts of 10, 15, and 25 years, respectively. And none has won one since.

Recruits do not remember those games, nor do they remember college greats from those teams like Torrance Marshall, Josh Heupel, Jonathan Vilma, Ken Dorsey, Willis McGahee, Jeremy Shockey, LenDale White, Matt Leinart, or Shaun Cody, unless they remember their NFL careers.

And few of the players drafted during that time are still in the NFL, either. I found fewer than 10 from the 2000-02 drafts.

Imagine being a coach at one of those historic powers and explaining that no joke, we actually have recently won a title at Miami/Oklahoma/Tennessee/Michigan/Nebraska, and then looking at a kid as he decides whether to believe you without Googling it.

They may have some memory of seeing Texas, Florida, or LSU win a title.

It’s possible that an elite recruit in Dallas watched Vince Young to put Texas over USC during his kindergarten year, but I seriously doubt most recruits could name the last time Texas won a title. Almost all of their college football cognitive existence has involved hardware being taken home by East Coast schools, mostly in the Southeast. 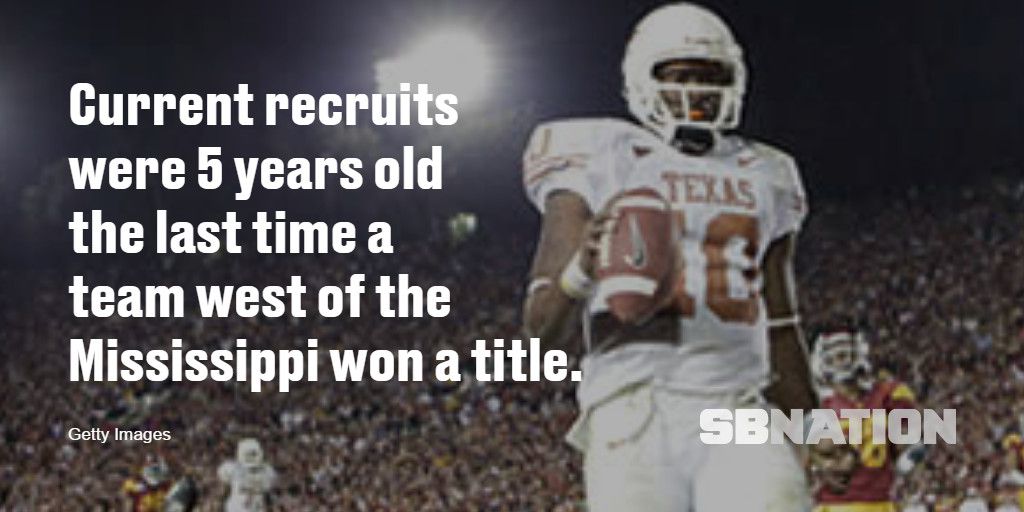 Anecdotally, kids do seem more likely to remember individual stars from their time in elementary school (2005-10). They seem to remember Tim Tebow for what he did at Florida or Patrick Peterson at LSU. And most of the quarterbacks we speak with do seem to vividly remember Cam Netwon, not just with the Panthers, but with Auburn.

The formative years have been dominated by Alabama, Ohio State, Florida State, and Clemson.

Since the current class of recruits entered middle school in 2011, only those four programs have won titles. They are also the only four FBS schools with a winning percentage above .800 in that span, and have produced two Heisman winners in that time (Jameis Winston and Derrick Henry).

Those four schools are whom current recruits have grown up with as the best during their most formative years.

Current recruits are also the group that has been the most inspired by minority-ethnicity quarterbacks getting football’s highest recognition; seven of the last 11 Heisman winners have been minority quarterbacks, a newly emerging trend.

Texas and Tennessee have been the most lackluster of the prestige programs since current recruits entered middle school, with Auburn and Miami not far behind.

The Vols check in at 40-35 in that span, while Texas is one win better at 41-35. Auburn is 46-32, which is surprising until you realize that the Tigers won the title with Cam Newton the year before the class of 2018 entered middle school. And Miami is just 45-31 in that span, with no division titles.