2017 SEC football power rankings: Bouncing back, but can anyone catch Alabama? 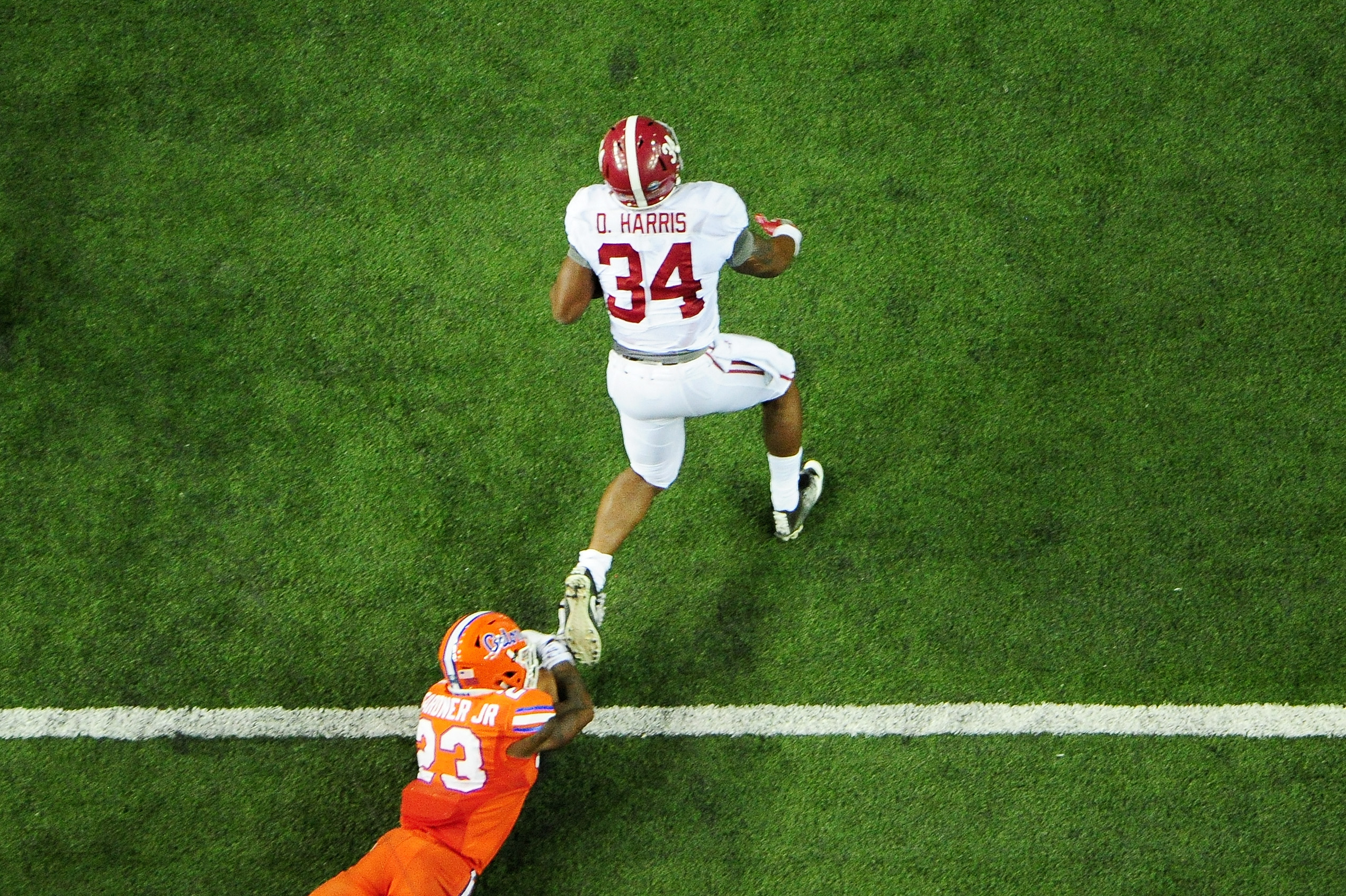 It’s hard to feel too badly for the SEC whenever other fan bases and conferences send snark its way. The “SEC! SEC!” chants alone invite it, whenever a league team loses to someone from another league. And in 2016, there was a strong case that this was not the best conference.

But while there are ongoing questions about recent coaching hires and whether imitating Alabama coach Nick Saban is a smart way to beat Saban (hint: it’s not), part of the reason the SEC got caught last year was youth — at quarterback, in key coaching roles, and throughout depth charts. And if you don’t believe, just look at this year’s depth charts. They’re packed with all the experience last year’s lacked. With your national title favorite, two other contenders, and depth it hasn’t been able to boast for a couple of years, 2017’s SEC will likely come pretty close to living up to its self-made hype.

Nick Saban almost had his best team ever, despite a freshman QB. The QB's no longer a freshman.

Here's why you should feel great about Auburn this year, no matter how terrifying that is.

Ed Orgeron's Tigers are just a liiiiiiittle bit of offense away from a Playoff run.

Auburn has to prove that its defensive front can hold up as well as last year’s did; there are plenty of former star recruits up front, but there’s no Carl Lawson and no Montravius Adams. If the run defense remains strong, the Tigers have CFP potential.

We know LSU’s issues pretty well at this point, don’t we? If Ed Orgeron’s Bayou Bengals have a passing game, they could be fantastic. But that’s a mighty if.

Will Kirby Smart’s second team be a division champ or just a more experienced version of his five-loss team?

Jim McElwain's only improved one real thing about the Gators so far: close games.

At some point, if you're not moving forward, you're moving backward.

Dan Mullen has built ... a steady program? In Mississippi? Is that legal?

It’s really tempting to talk yourself into UK as an SEC East dark horse.

Bret Bielema's brand is strong, but where are the wins?

There are 10 teams with legitimate top-25 potential. Not all 10 will play at a top-25 level, but each has an excellent case.

And man oh man, is it difficult to distinguish between Georgia and Florida at the moment. Massive upside? Check. A long list of questions to answer? Check.

The Rebels have no reason to give a damn. This should be fun.

Will Muschamp's Gamecocks are on the rise! Maybe!

Mizzou has one thing in common with new rival Arkansas: extreme volatility.

The good news: The Dores should again be better. The bad news: So should their opponents.

The other reason why the SEC is probably the best conference in 2017: All 14 teams have legitimate top-50 potential. And the No. 11 team on this list probably has top-20 talent. Unless you’re Alabama or maybe Auburn/LSU, there will be few easy outs in SEC play.

Here’s how my statistical system has the SEC laid out for 2017, with zero equating to an average FBS team. (You can find full 2017 S&P+ projections here.) It’s not exactly USC in the Pac-12 South, but Alabama’s got a startlingly large projected lead on the field, considering there are two other projected top-10 teams in this division.

We only need a couple of upsets to get geared up for a seven-way tie at 4-4. Fingers crossed. Florida starts out with the projected advantage because of scheduling. 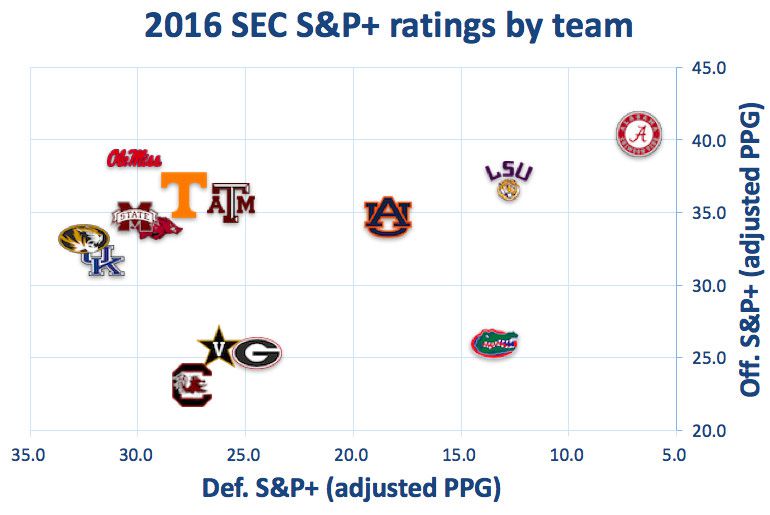 The primary story line heading into last year was how many QBs this conference was replacing. But offense wasn’t necessarily the problem for a lot of SEC teams; plenty had an adjusted scoring average over 30 points per game. But 10 of 14 were also giving up at least 25 adjusted points per game. The defenses were young, too. 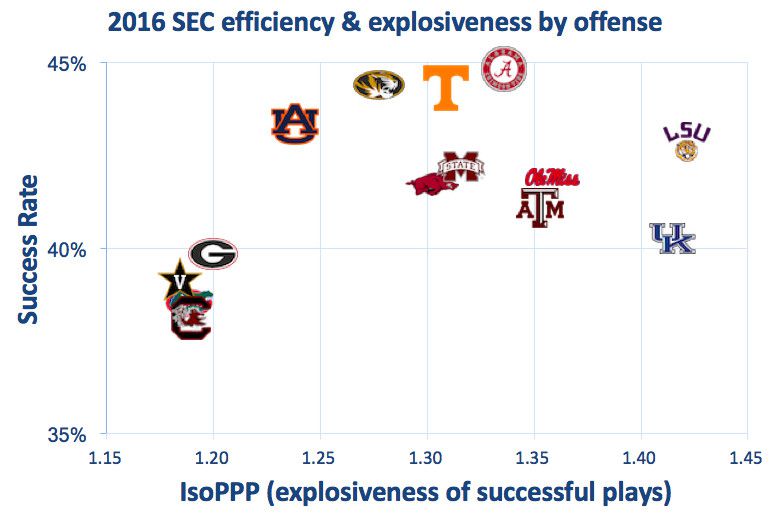 Big-play ability was the separator last year. The range between the best and worst success rates in the conference was minuscule.

Okay, fine, Jarrett Stidham should probably be the guy mentioned for Auburn. But he’s a transfer, and I just wanted to note that Braden Smith is one hell of a mauler.

Regardless, in a conference loaded with good running backs, one in particular stands out. 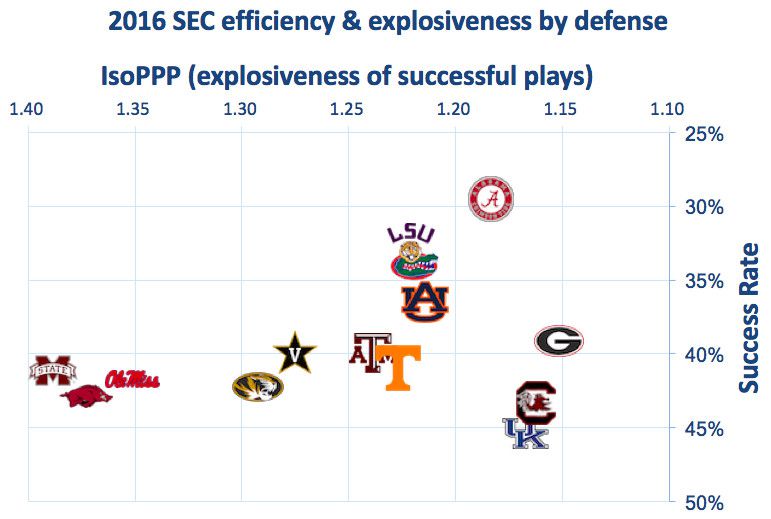 You had bend-don’t-break defenses, you had exciting, attacking defenses ... and you had a few straight-up bad ones, too.

There are lots of front-seven guys on this list, but a safety leads the way. 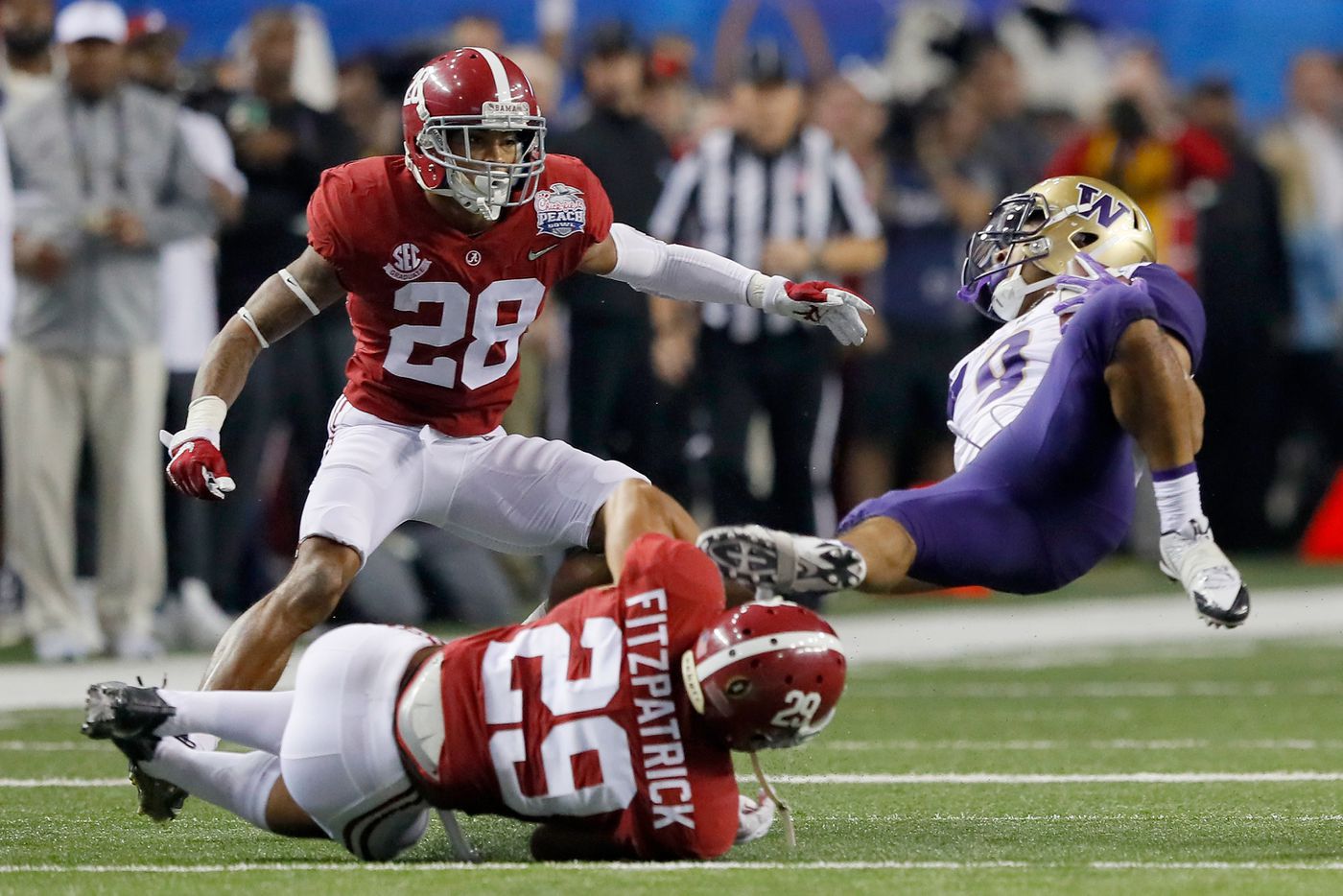