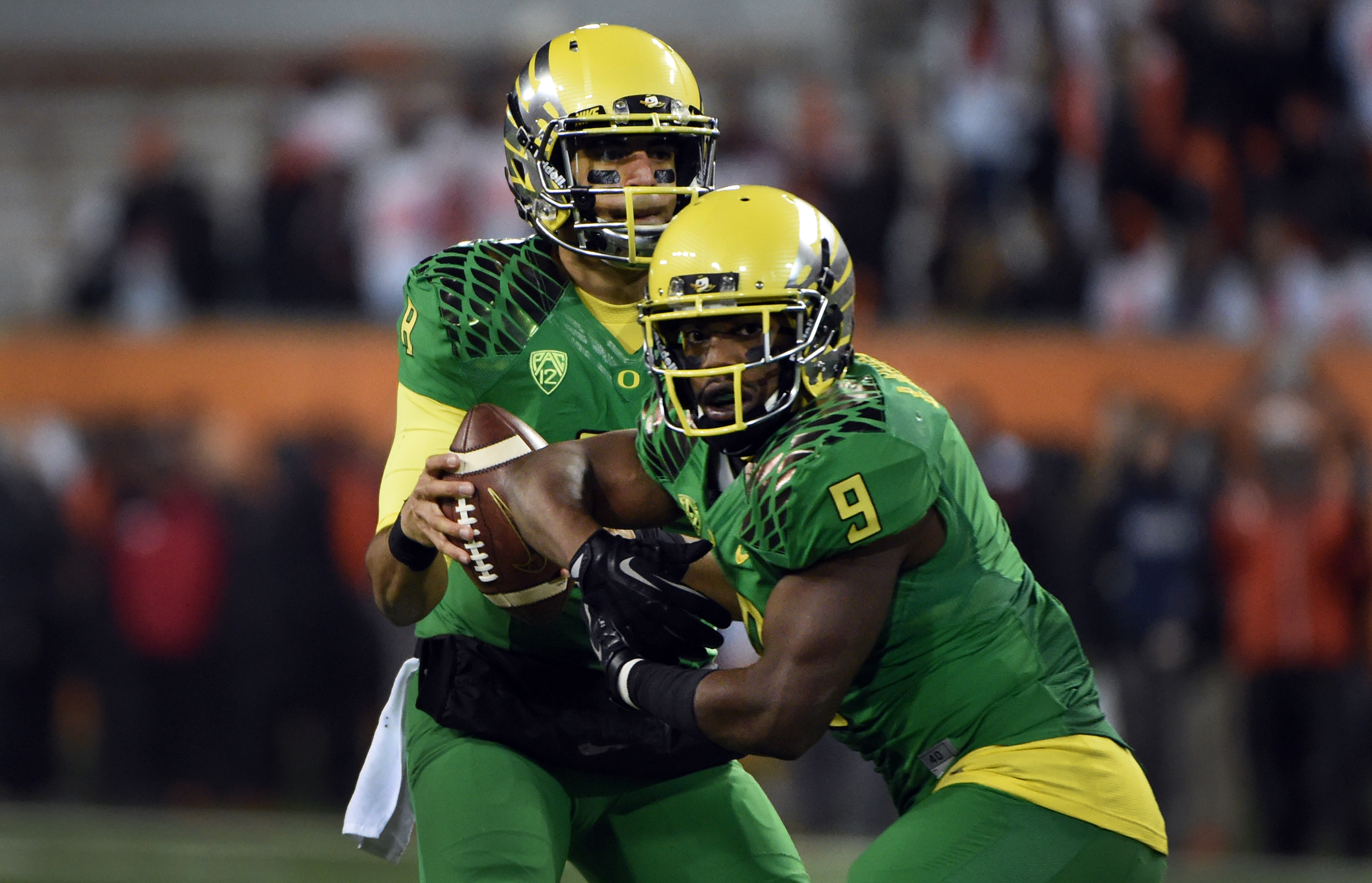 For more than a decade, one word has defined the current iteration of offensive football in college: spread.

The spread offense scatters players wide all across the field. It’s designed to be distribution-friendly. It forces defenses to worry about every eligible ball carrier on the field, and horizontal inches as well as vertical.

The spread has taken over from coast to coast, from high school to the NFL. It’s now an indelible part of football offenses everywhere.

It’s difficult to define what "spread" means, given that the term has become such a catch-all. It confuses even Power 5 head coaches if you ask them.

I think the definition around ‘What is spread,’ I think that’s changing. I think what you’re looking at is multiple-set teams versus just being in a spread. I think there’s guys that can operate in a spread from different personnels.

I guess I’d just name the things that I think the average fan would say when they say, ‘OK, well, they run the spread. That means they’re gonna see the quarterback in the shotgun. You’re probably gonna see multiple formations out of that, and then you’re gonna see probably a no-huddle, run-a-lot-of-plays situation.’

If there’s an all-inclusive consensus, it’s this:

To us, it’s truly making the defense defend the entire field.

There are a few ways to explain the spread’s spread.

In college, the spread offense is an equalizer. If your team can’t recruit elite linemen, a wide-open offense might be the way to mitigate the talent gap.

Mumme says the sport can "never go back."

When we went to Copperas Cove [High School in Texas in 1986], when I got the job there, they had had no success. I mean, they were really bad. And the four best athletes in school all played other sports. Three years later, those same athletes were the all-district quarterback and three of the all-district receivers, and one of them got a scholarship to the University of Texas.

But it’s not just underdog teams.

Not everyone is buying into the spread, however.

Cardinals coach Bruce Arians once complained about quarterbacks who never called plays in the huddle or used a snap count in college, saying, "that ain't playing quarterback. There's no leadership involved there. There might be leadership on the bench, but when you get them and they have to use verbiage and they have to spit the verbiage out and change the snap count, they are light years behind."

Mumme thinks back to a conversation he had with an NFL evaluator at a golf course last year.

Football is a copycat profession. In the NFL, when a team wins a Super Bowl, everyone’s looking at their model and how they did it, what scheme they used, and try to emulate that, and I think it’s the same in college football.

The spread is much more than just the passing game. The run game has always been a key feature.

The option run is already a spread-like concept, going back to its predecessors like the shifting single-wing formations in the 1920s or the wishbone in the 1960s, both of which live on today in offenses like Gus Malzahn’s at Auburn and Paul Johnson’s at Georgia Tech, respectively. Those offenses forced defenses to defend multiple potential ball carriers, innovating deceptions like those often associated with spreads.

The zone read, the latest major innovation to the run option, is a simple play. The quarterback either hands off or keeps, depending on what a single defender does.

The play was born from a mistake. In 1991, now-Arizona head coach Rich Rodriguez was the boss at little Glenville State College. During a practice, his quarterback bobbled a shotgun snap, saw the defensive end crash, and decided to keep the ball. It worked, and it kept working.

Here’s the look from Rodriguez’s 2005 playbook.

The zone read infiltrated every level of the sport as Rodriguez moved up the ranks as the offensive coordinator at Clemson and then as a head coach.

The zone read is one of the most popular plays in amateur football. It also spawned a whole other set of plays.

Run/pass options are en vogue now, but they’ve been around for quite a while.

In 1997, Mumme’s first year at Kentucky, his team played Steve Spurrier’s No. 1 Florida. The Wildcats offensive line was overmatched, so Mumme drew up a different kind of option.

We couldn’t block Jevon Kearse, and so we told Tim Couch to either throw a bubble screen or hand the ball off. It was so easy to do. I don’t know why we didn’t keep doing it. We probably should have.

A few years ago, teams began using plays that functioned as quadruple-options. The base was the zone read (options one and two), but if the defense loaded the box to stop the run, the quarterback could instead throw a screen pass to the flat (three) or a hitch route to a single-covered receiver on the other side (four). The plays look like this, with plenty of variations:

These packaged plays have become norms nationally. West Virginia head coach Dana Holgorsen, a Mumme protégé, ran them with Texas A&M coach Kevin Sumlin when both were at Houston in the late 2000s. In 2014, the Seattle Seahawks broke it out, and Pete Carroll said he picked up the play from watching Auburn.

The RPO Auburn used to tie Alabama shortly before the Kick Six in the 2013 Iron Bowl is the most famous. The play was a zone read at the start, with a pass read built in for quarterback Nick Marshall. Two Tide defensive backs ran to tackle Marshall, and none covered receiver Sammie Coates.

What the RPO game has done for you is, it enables you to have a really strong running game if the defense allows it. And if they don’t, the RPOs, the throws to the perimeter and to your inside receivers, those things, they’re such high-percentage throws, they’re like runs.

Stitt says he’d be content to either run or throw on every play for an entire game.

And it’s all in the hands of the quarterback, with built-in fail-safes to always make the defense wrong.

It’s not that quarterbacks don’t have to think.

It’s amazing, a quarterback, how much he has to do in the shotgun with all the RPOs that you run, all the zone-read, run-or-keep that you're doing, all the communication that you have to give the rest of your offensive players in a second-and-a-half timeframe.

Stockstill played quarterback at Florida State in the 1970s and ‘80s, and says he never took a shotgun snap.

The system is designed for quarterbacks to succeed as long as they make a series of correct decisions. Montgomery says the RPO spread offers "the ability to not have a bad play."

The RPO spread means quarterbacks don’t have to remember as much raw information. They need sublime muscle memory, along with new levels of athleticism. And once the play starts, things move at a million miles per hour.

If you speak about the play call to any person on the line or any person at the tight end position, or the running back, or the receiver, and you give them anything wrong, there’s a very good chance the play’s gonna be unsuccessful, right?

That means you’re going to have to develop more efficient communication tools.

Teams want to play fast, and that means stripping a lot of the verbiage out of complex play calls. The faster they go, the less a defense can substitute.

Play calls have been evolving in lots of ways for decades, but let’s go back to a man named Don Coryell, the head coach of, most notably, the San Diego Chargers in the 1980s. His many vertical passing innovations changed football forever, and it started with a simple numbering system.

This is a page from Steve Spurrier’s 2000 playbook, itself one of several systems (including the four-wide run-and-shoot, LaVell Edwards’ BYU offenses, and Al Davis’ extension of Sid Gillman’s timing-based innovations) that helped usher in the spread with a wide-open and aggressive vertical attack. The page details the route tree, showing how each route is assigned a number. 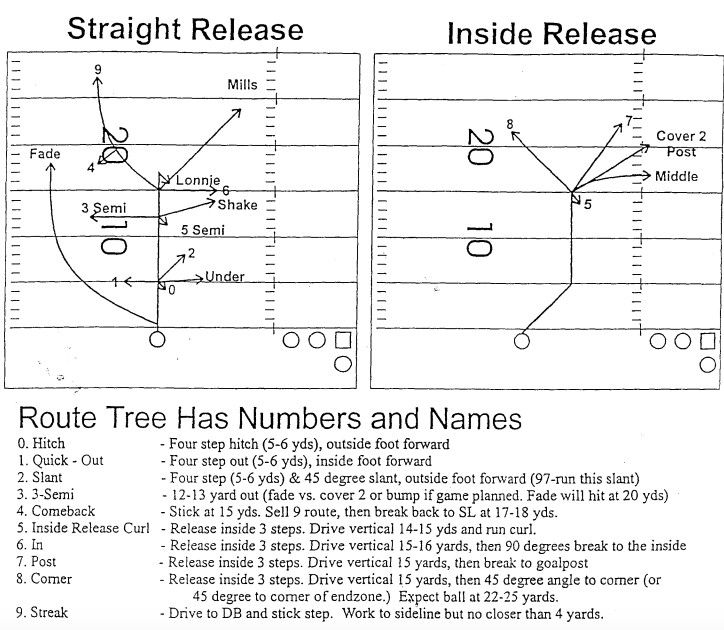 Coryell’s system allowed for a three-digit tag to be added on the end of each formation, giving three receivers their assignments in just a few syllables, rather than a long string of words.

Football teams are still pushing the boundaries here. While plenty of teams still use heavily verbal play calls, others use numbers, and many use visual signals like hand signs or images. 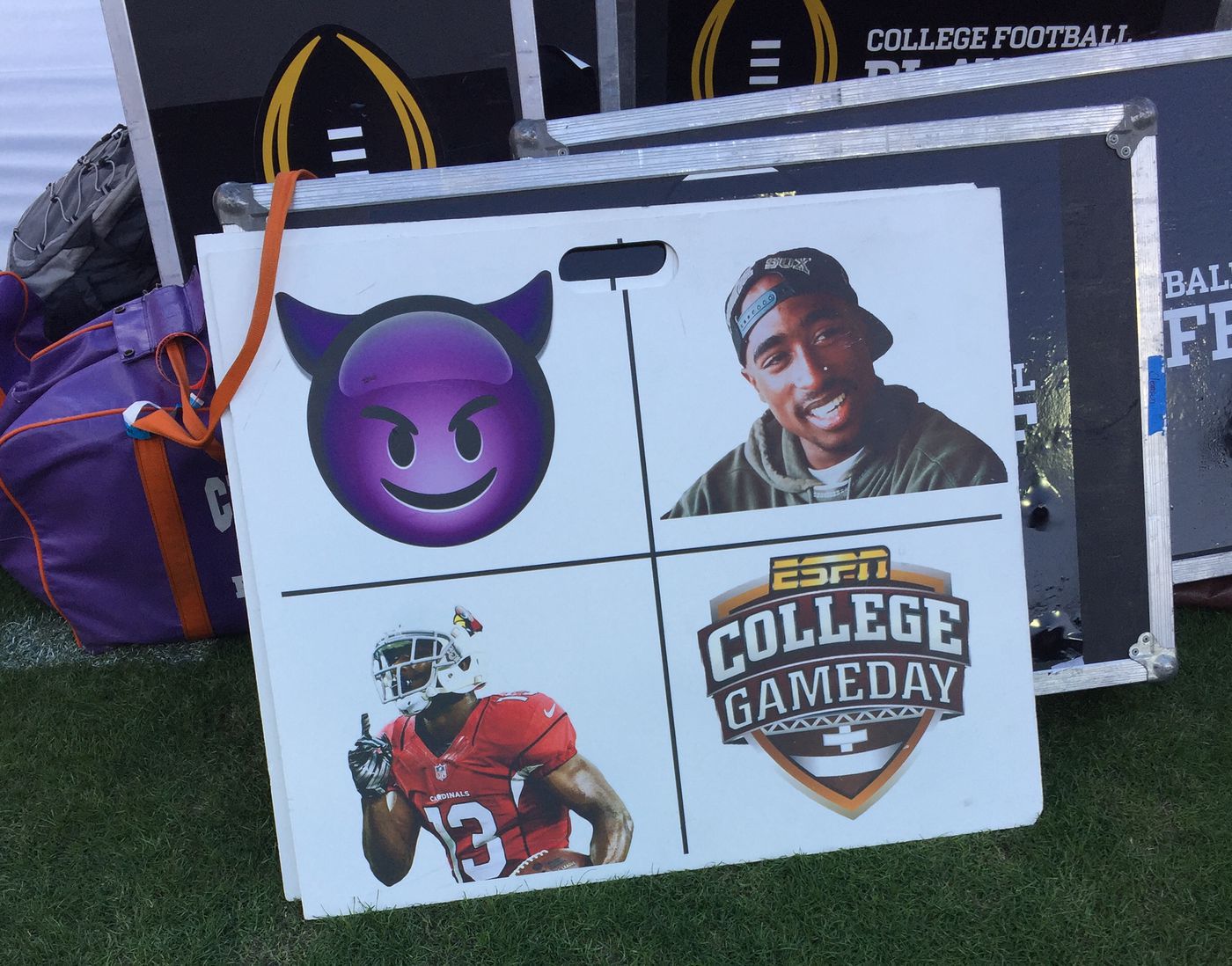 Oklahoma State was one of the earliest adopters of these signs, many of which are decoys these days.

In 2008, Glen Elarbee, a 28-year-old graduate student at Oklahoma State at the time, answered coach Mike Gundy's request to find a way to speed up messaging between offensive coaches and players.

"It's one of those things where you see them, and it's a cool story at parties," said Elarbee, now co-offensive coordinator at Arkansas State. "I was part of that. I haven't done too many things in my life that are really that cool. It's kind of neat."

While some coaches use playbooks that look like encyclopedias, some air raid practitioners like Leach and Dino Babers don’t use physical playbooks at all. Babers explains:

"You learned football on Xbox where you could actually choose your team and control your players," Babers said. "You grew up in a visual age. That's how we teach these guys, is the way they grew up. We don't make them read, which is the way we grew up."

And that leads to what people get wrong about the system. Babers told SB Nation in January that the biggest misconception of the air raid system is that the offense is simple.

The state of modern offense has changed the way defenses operate.

The nickel defense — a defense with an extra defensive back — has become a base defense instead of just a sub-package. As spread offenses have innovated, defenses have innovated right back, continuing the sport’s century-plus history of dueling philosophies.

That means there could be a shift in the other direction someday, too.

There’s more than one way to win. I still believe you can win with a power run game if that’s what suits your personnel. All someone has to do is win a national championship using a power run game, and people will start gravitating towards that. It’s just how it works.

The Alabama dynasty’s many copycats in the SEC East suggest there’s something to that, even though the Tide themselves have evolved into a spread-to-run team.

When even Nick Saban, the Bill Belichick disciple and defensive mastermind who complained about tempo only a few years ago ("Is this what we want football to be?" he said), has embraced the spread, it’s as clear as ever that the spread’s time as the future of offensive football is right now.