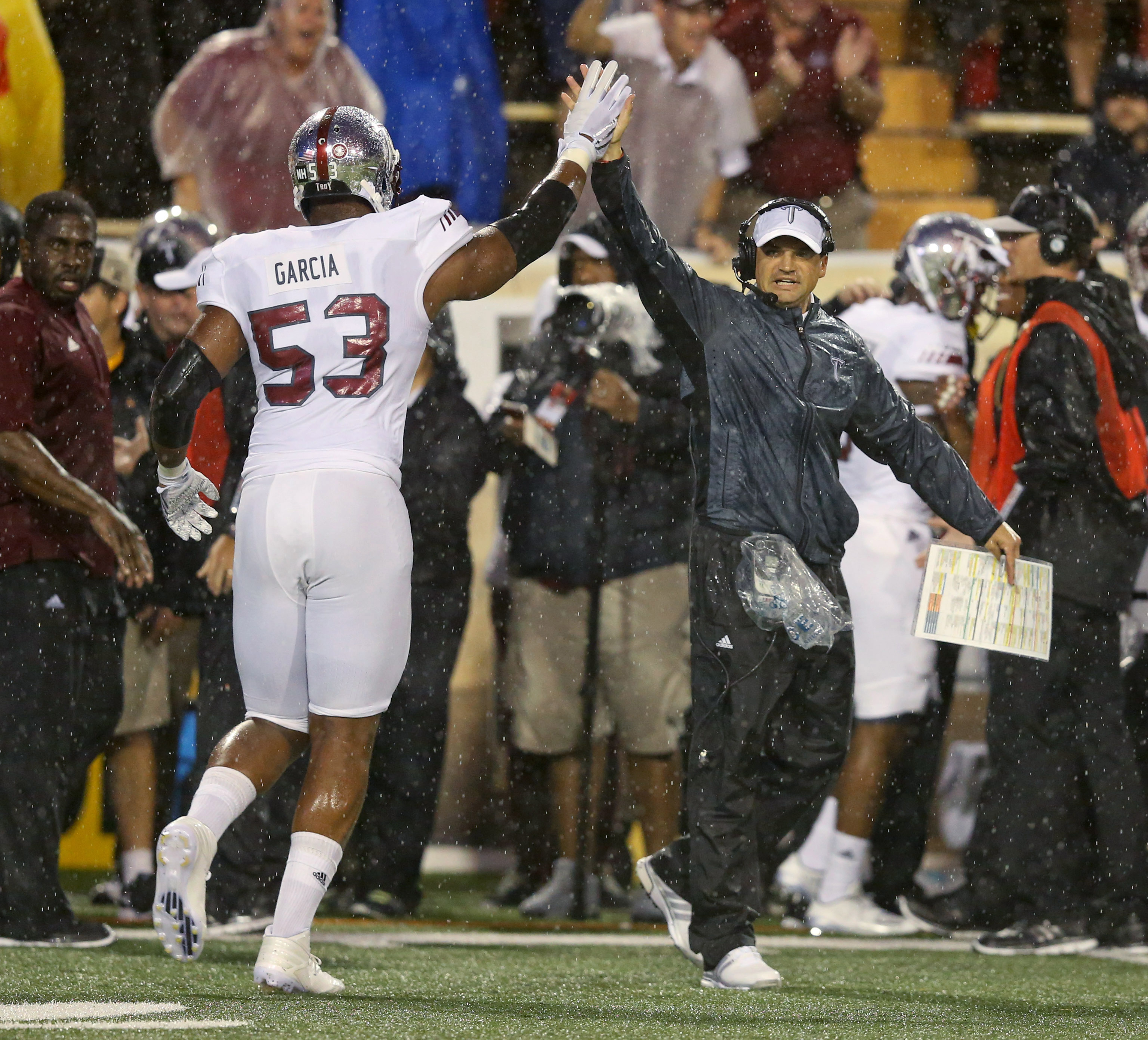 The Trojans are the Sun Belt's best team, but might not be the conference favorite.

App State has a winning identity, an easy Sun Belt schedule, and a countdown until they knock off another Power 5 team.

I really, really like Troy this year. The Trojans were awesome for half of last season before hitting a few bumps, and as with just about every mid-major, they could have their depth tested severely with just a couple of poorly placed injuries. But I see a deep, experienced team, one that might be more capable of handling depth issues than others in the conference.

Of course, I still see Appalachian State as your conference favorite, if we’re taking schedule into account. It’s such an advantage to skip both Troy and Arkansas State and get Georgia Southern at home. App State doesn’t play any of my Tier 1 or Tier 2 schools and gets three of five Tier 3 schools at home. It’s almost impossible to craft a schedule easier than that. That isn’t the Mountaineers’ fault, but it does set up a situation in which the team that is truly the conference’s best doesn’t win the title. They’ll live with that, I’d imagine.

The Red Wolves have mastered the art of peaking when it matters most.

ASU has mastered the art of peaking in conference play, and if the Red Wolves do so again, they could sneak into another tie for the conference title at 7-1 or so. They don’t have quite as many new pieces this time around, and that should work out well for them. That offense got awfully bad, awfully quickly, though.

An outsider head coach has a second chance to prove he can win, Statesboro-style.

The Vandals can play for titles in FCS, but their last season in FBS is still sad.

Every year, USA is both great and terrible. Expect that to continue.

Mark Hudpseth dramatically raised the bar, but the Cajuns might be bowl-free for the second time in three years.

The Chanticleers join FBS without the most interesting coach in college football.

The Panthers take over the Braves’ old stadium and bring in a guy who’s technically been an SEC head coach recently.

At least three of these teams will go bowling, I’m betting, and depending on how the standings shake out, I could see as many as five becoming bowl eligible, if just barely. (On the flip side, we could see about four of these teams finishing 5-7, too.)

Still, there are lots of story lines: Can Georgia Southern bounce back and show some of the promise it lost last year? How is Idaho’s last FBS season going to play out? Can South Alabama finally find some consistency? Can UL overcome a ridiculous schedule? How will Coastal fare out of the FBS gates? How quickly can Shawn Elliott put some pieces together in Atlanta?

For NMSU, the time is now. Like, this very second. Hurry.

This is a hard job, but it’s easy to like what the new coach is doing so far.

TXST is the right place for a startup. Will 2017 show proof?

It wouldn’t be a total surprise to see Doug Martin’s all-in approach to recruiting pay off. NMSU gets a huge (and brief) boost from JUCO recruiting and could threaten 6-6 if Larry Rose III gets going and the defense isn’t terrible. Still, the Aggies bear the burden of proof.

And while I think both Matt Viator at ULM and Everett Withers at TXST could get some momentum, it’s probably going to take another year. 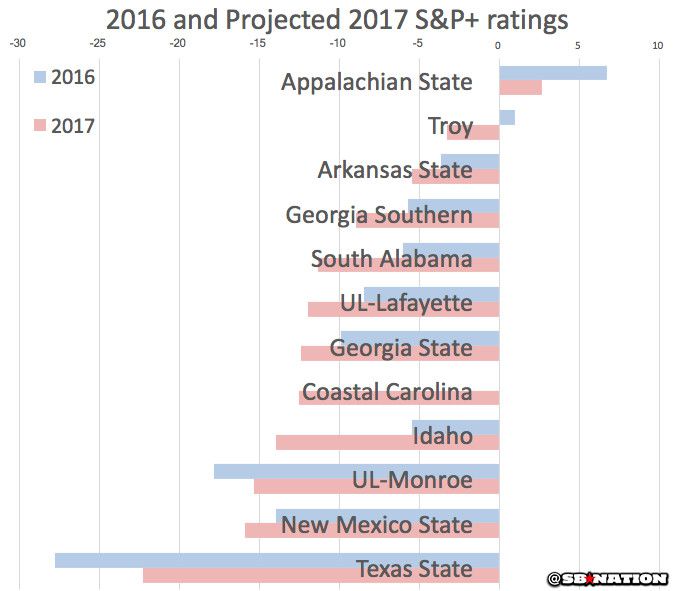 S&P+ sees a projected advantage for Appalachian State, and that’s before you take into account that the Mountaineers don’t face Troy or Arkansas State.

I think S&P+ is selling Idaho short, but the Vandals could collapse under just a couple of injuries. Regardless, S&P+ sees this as either a one- or three-team race, depending on how far you want to stretch the parameters.

As a review, by the way, here’s where the teams stood last year, in offensive and defensive quality. 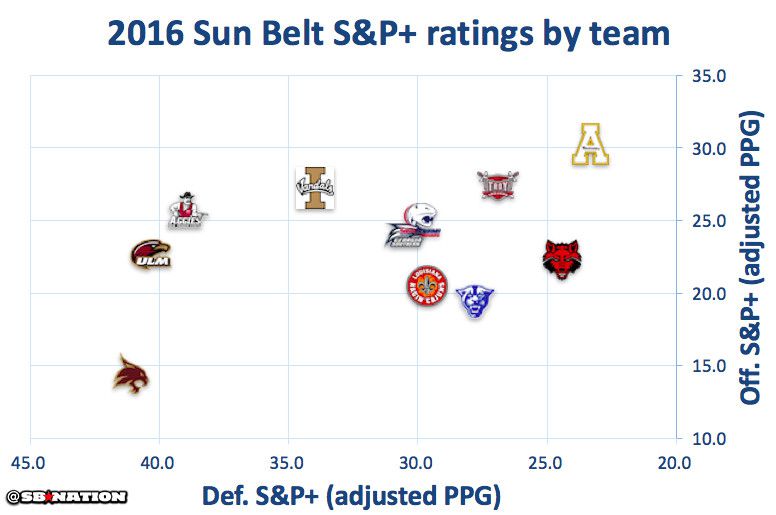 I like Troy, but App State was the best-rounded team in the conference a year ago and could be again. 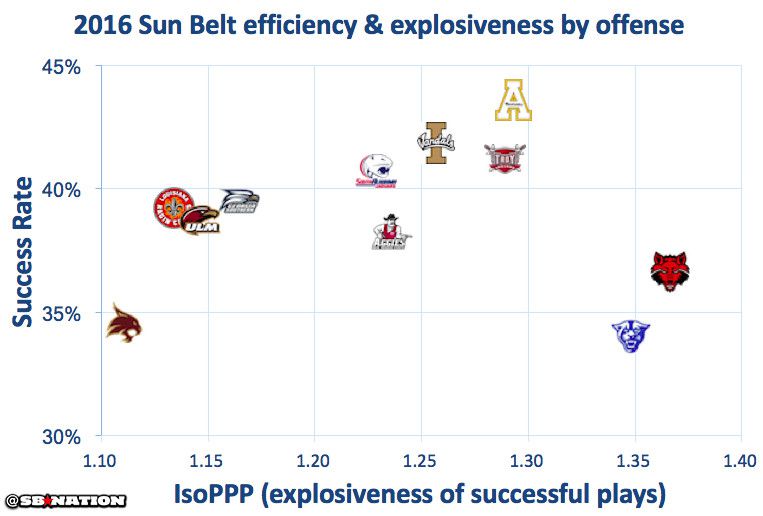 Most Sun Belt offenses were efficiency-based in 2016 (App State most of all), while Arkansas State and Georgia State were all-or-nothing. The former makes you more reliable, but the latter sure is fun.

When healthy, Rose is the best. But Linehan, Silvers, and Moore in particular have pretty good cases. 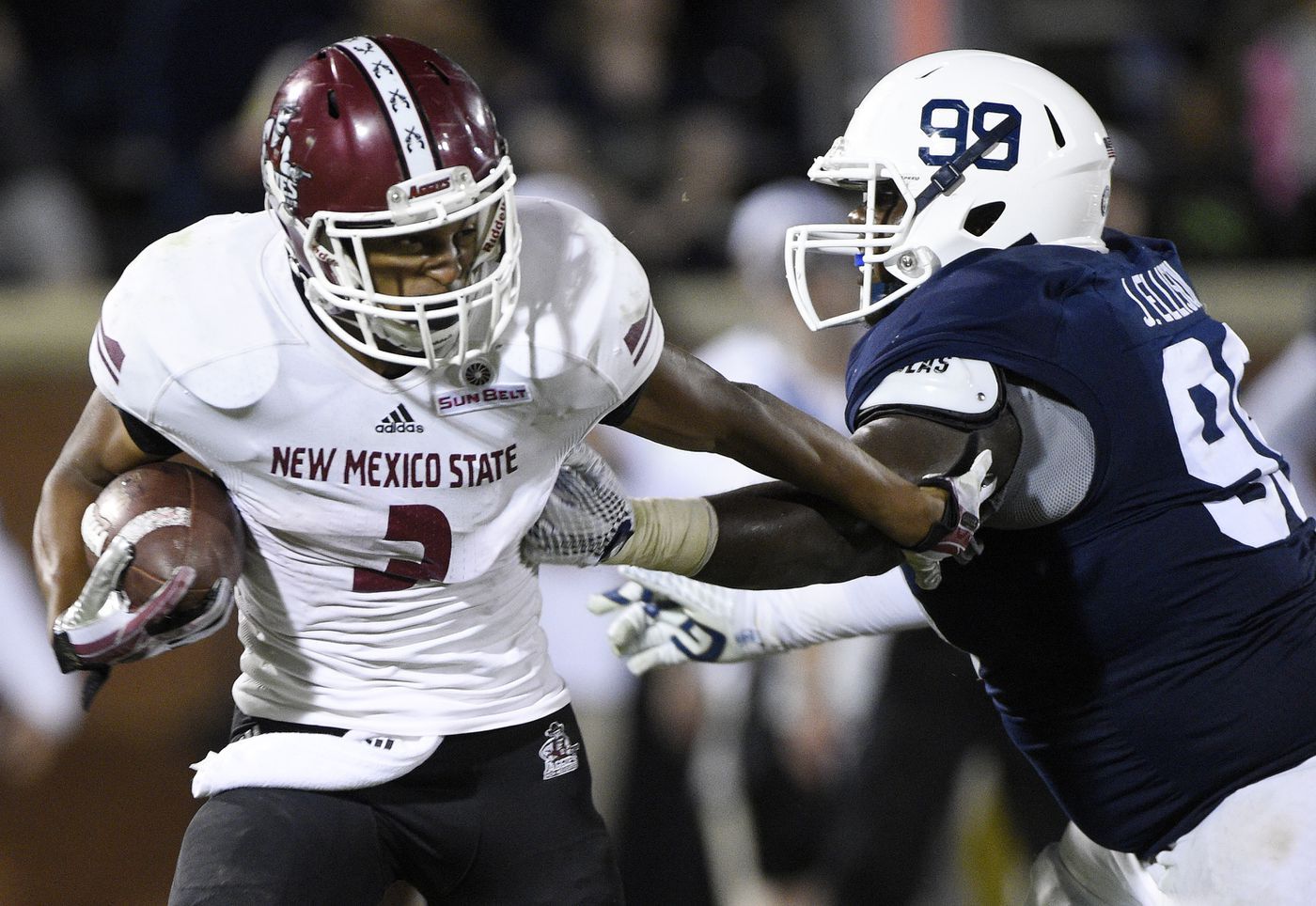 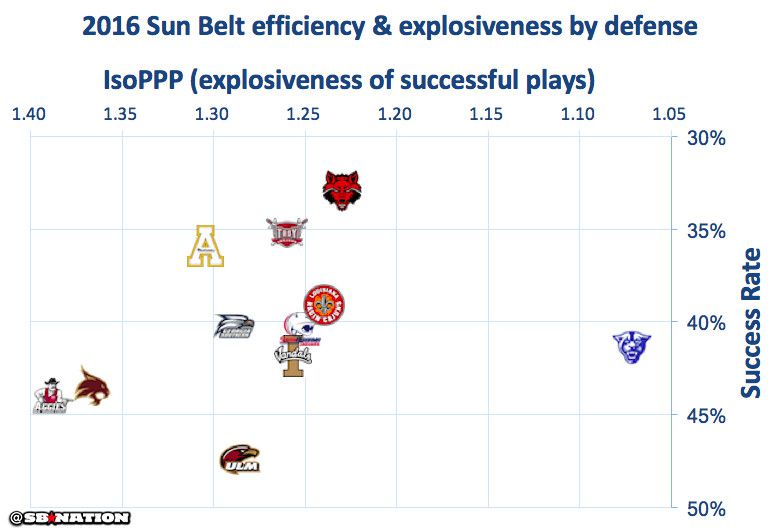 Georgia State was all-or-nothing on offense and bend-don’t-break on defense, offering mediocre efficiency combined with by far the best big-play prevention in the conference.

Meanwhile, Arkansas State has a brand. The Red Wolves are going for big plays on offense and sacrificing them for three-and-outs on defense. And they have maybe the best player in the conference leading the attack.

I don’t think I trust ASU quite as much as I do Troy and Appalachian State, but the Red Wolves’ upside is undeniable. 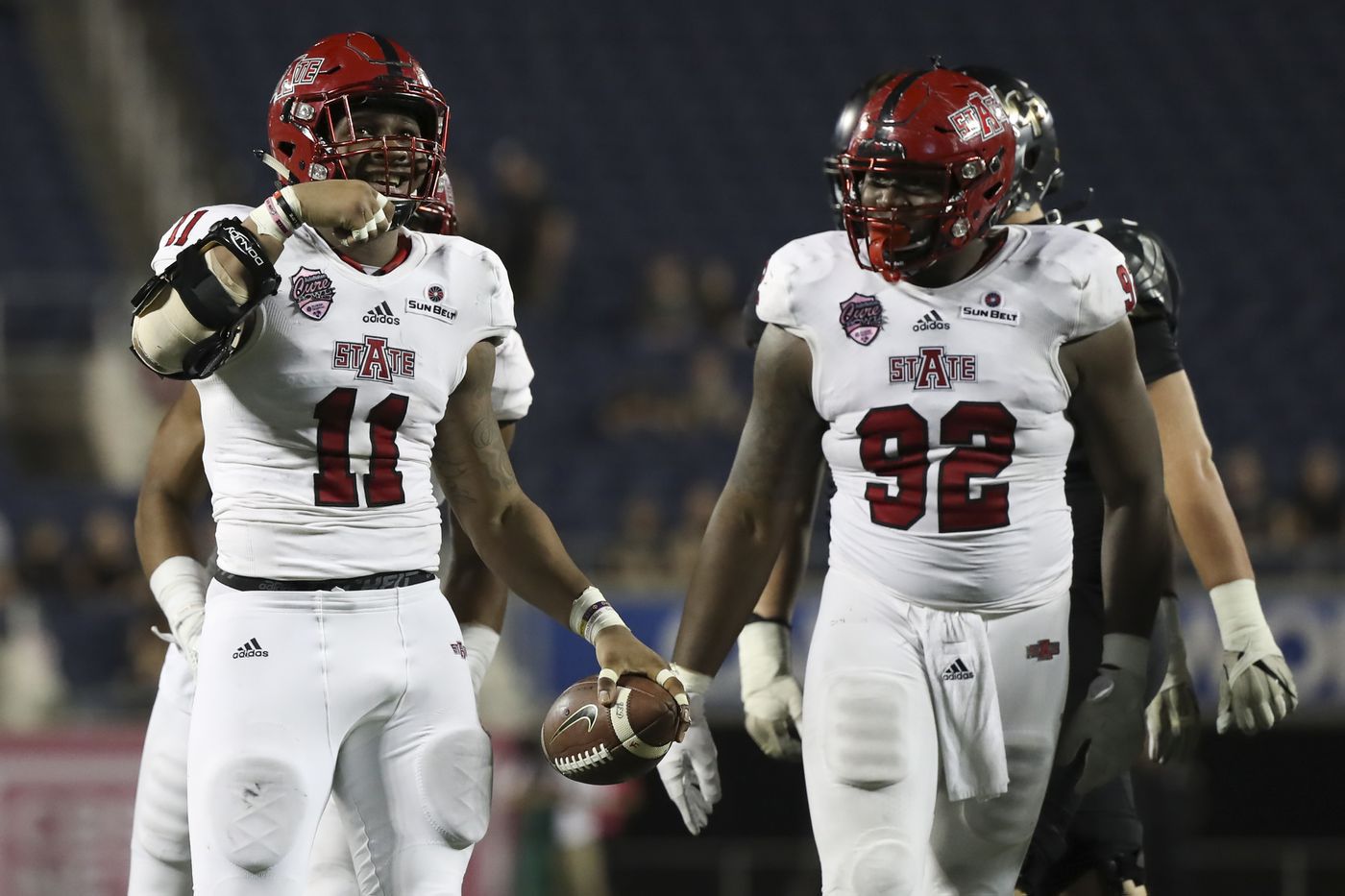