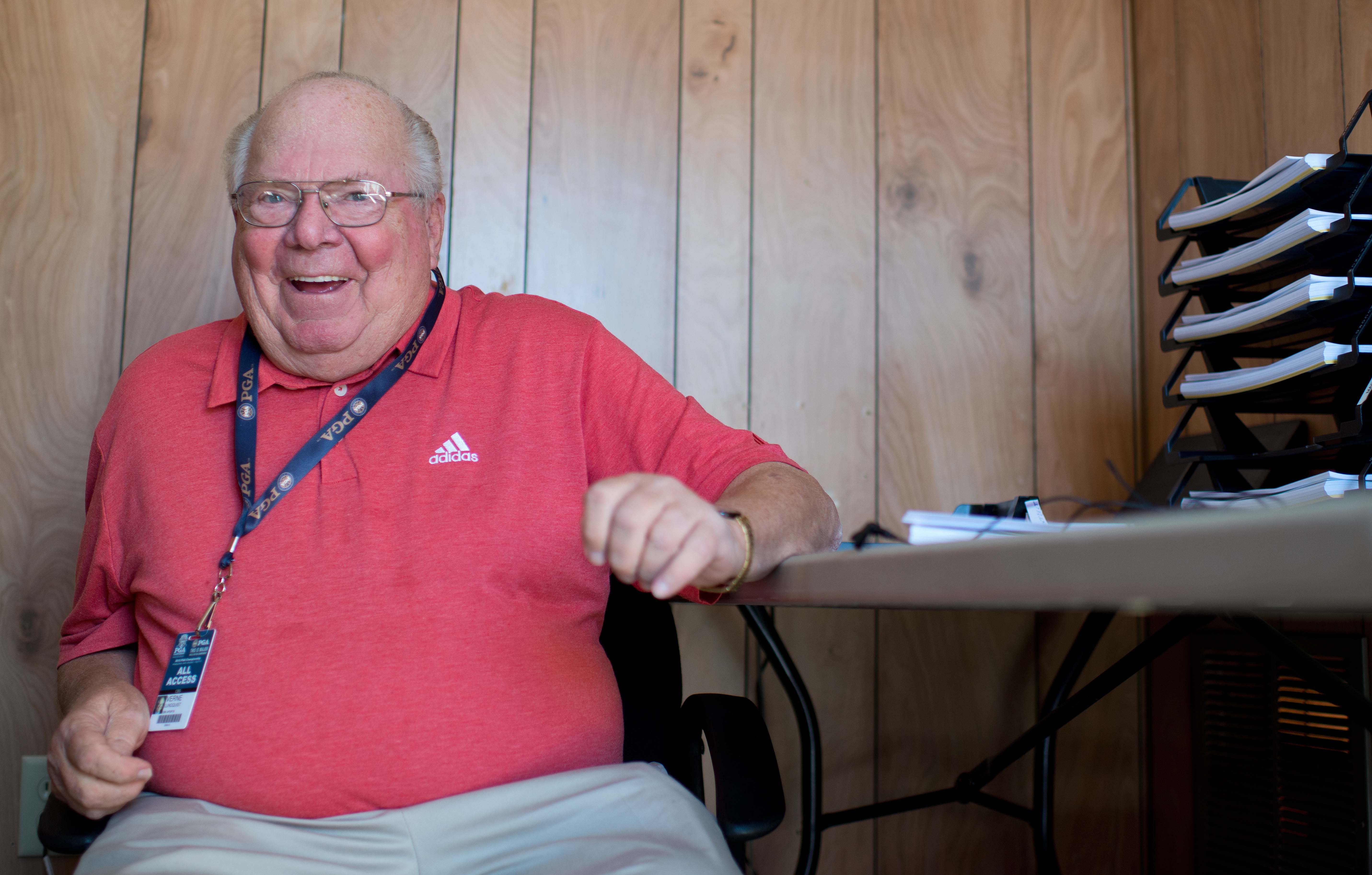 NEWPORT, R.I. — This part of the year is now radically different for Verne Lundquist.

These days, the legendary CBS broadcaster is emceeing American Athletic Conference Media Days and being the featured speaker for an Alaskan cruise with 500 Big Ten fans.

No longer is he taking part in his mid-July ritual of compiling notes on every SEC team. Instead, he’s readying for back surgery. He plans to return to CBS for The Masters, but he’s unsure about the NCAA tournament.

Health concerns were, in part, the reason Lundquist semi-retired at the end of the 2016 football season, delivering this heartfelt goodbye after Army-Navy.

His baritone tinged with Texas twang is as hearty as ever, but it cracks when he remembers the farewell tour that 2016 became.

As Lundquist went stop-by-stop through the Southeast, he received gifts at every campus.

“I’m about to get teary-eyed,” he said to SB Nation. “The most remarkable, unexpected expression of goodwill from everybody.”

“Every stop. Every stop,” Lundquist said. “I mean, we’ve got framed jerseys, I don’t know what the hell we’re gonna do with ‘em. All the stuff is going to my alma mater when I pass. But that was — I guess it was the unexpected nature of it. It started with A&M-UCLA and Kevin Sumlin. And he gave me a pair of cowboy boots and a framed No. 12 jersey, and if you grow up in Texas like I did, you understand ...”

He trails off to collect himself as the tears well up behind his glasses.

A video tribute by Ole Miss:

At LSU, No. 18 symbolizes leadership:

Lundquist may have been born in Minnesota, but he’s a Texan through and through.

He graduated high school in Austin and attended Texas Lutheran University. So near and dear is the university to his heart that he serves on its Board of Regents.

After spending much of the first half of his career in the Lone Star State, Lundquist and his wife, Nancy, moved to Steamboat Springs, Colorado in 1984, pretty much because they felt like it. By that time, he had broadcasted everything from Bowling for Dallas to Cowboys games on the radio. He began a first stint with CBS at 1982, but not everyone was thrilled with his move.

“We don’t have children. We had a little vacation home, and we thought, well, we can do this. So we did,” Lundquist said. “The first time I told my golf producer Frank Chirkinian we were moving, he said ‘where?’ I said ‘Steamboat Springs.’

“And he put his finger in my chest, and he said, ‘You’ll live in effin' Steamboat Springs until you miss your first-ever golf tournament.’ OK, I know what the bottom line is now. It’s a great place, and we’re very much at home there.“

The travel concerns from the quaint skiing town, three hours away from Denver, are actually real.

He says he won’t miss the act of traveling to remote SEC cities one bit, although he will yearn for the towns themselves. Anyone flying to a destination in the South can empathize.

“Chris Fowler, who’s a dear friend, when he was hosting GameDay, said the three most dreaded words in travel are: Atlanta Delta connection,” Lundquist said. “I told Chris, I want that on my tombstone, and he’s right. So I won’t miss that. We’ve lived, by choice, in a mountain resort, and there are no nonstops from Steamboat Springs to Tuscaloosa.

“But the actual experience, there’s nothing like it. And I’ll miss that for sure.”

His role with the Tiffany network rocketed him to cult hero fame, with his old-timey anecdotes and homey charm.

He forever will be affectionately known as Uncle Verne by those who welcomed him into their homes at 3:30 ET on Saturdays. That role was, frankly, a bit of a demotion at the time.

“There are a lot of Ritz Carltons and Four Seasons in the NFL,” he said. “There aren’t many in the SEC. I was really comfortable.”

“It was not my choice, but obviously it turned out to be the greatest thing that ever happened to me.”

Lundquist was the No. 2 guy on CBS’ NFL coverage by the late 1990s. In the winter of 1999, the network had a chance to hire legendary broadcaster Dick Enberg, and Lundquist saw the writing on the wall.

“[My boss] said to me, ‘now, in the unlikely event that we were to hire Dick Enberg, how would you feel about moving to the SEC?’” Lundquist said. “And I said the appropriate things and hung up the phone and looked at my wife and said, ‘honey, pack your bags for Tuscaloosa.’ So it was not my choice, but obviously it turned out to be the greatest thing that ever happened to me.”

Lundquist shifted to the newly vacant lead play-by-play college football role for 2000. By 2001, CBS and the SEC had the exclusive marriage that beamed the conference’s marquee matchup into millions of living rooms.

They took a regional behemoth and made it a national brand.

Verne may have just been at the right place at the right time, but as the conference claimed the top of the sport, Lundquist was its voice.

The Kick Six would be an iconic college football play either way, but the spice of Lundquist making it clear that there are “no flags” as Chris Davis crossed the goal line goes down as one of the game’s best calls.

And as good as that narration was, perhaps the most poignant part of the call was what Lundquist didn’t say. The 71 seconds he and Gary Danielson laid out to let the delirious din of Auburn’s crowd carry the broadcast.

As tough as it was for him to step away from fall Saturdays, he says he’s ready.

“I just turned 77 yesterday,” Lundquist says. “Keith Jackson called it quits at 76, and I can go to my grave saying I lasted one year longer than Keith. It’s the only thing I outlasted him at, ‘cause he’s one of the great, great voices of this sport.”

Another great voice, Brad Nessler, will fill his shoes. And Lundquist will be watching on Saturdays just like the rest of us.

“I’m gonna call Gary and say, ‘what the hell were you thinking? Why did you say that?’”

His summer is different, just like his fall will be. Instead of getting ready to listen to crowds in the South, he’s settling in for rehab with the compositions of Dvořák, Mendelssohn, Tchaikovsky, and Rachmaninoff.

Here’s much more on his amazing career, his time as a doo-wop singer, that time a tornado interrupted one of his games, and the one sport he’d like to go back and call again.