Inside Willie Taggart's 1st Signing Day at Oregon, where everything sounds new 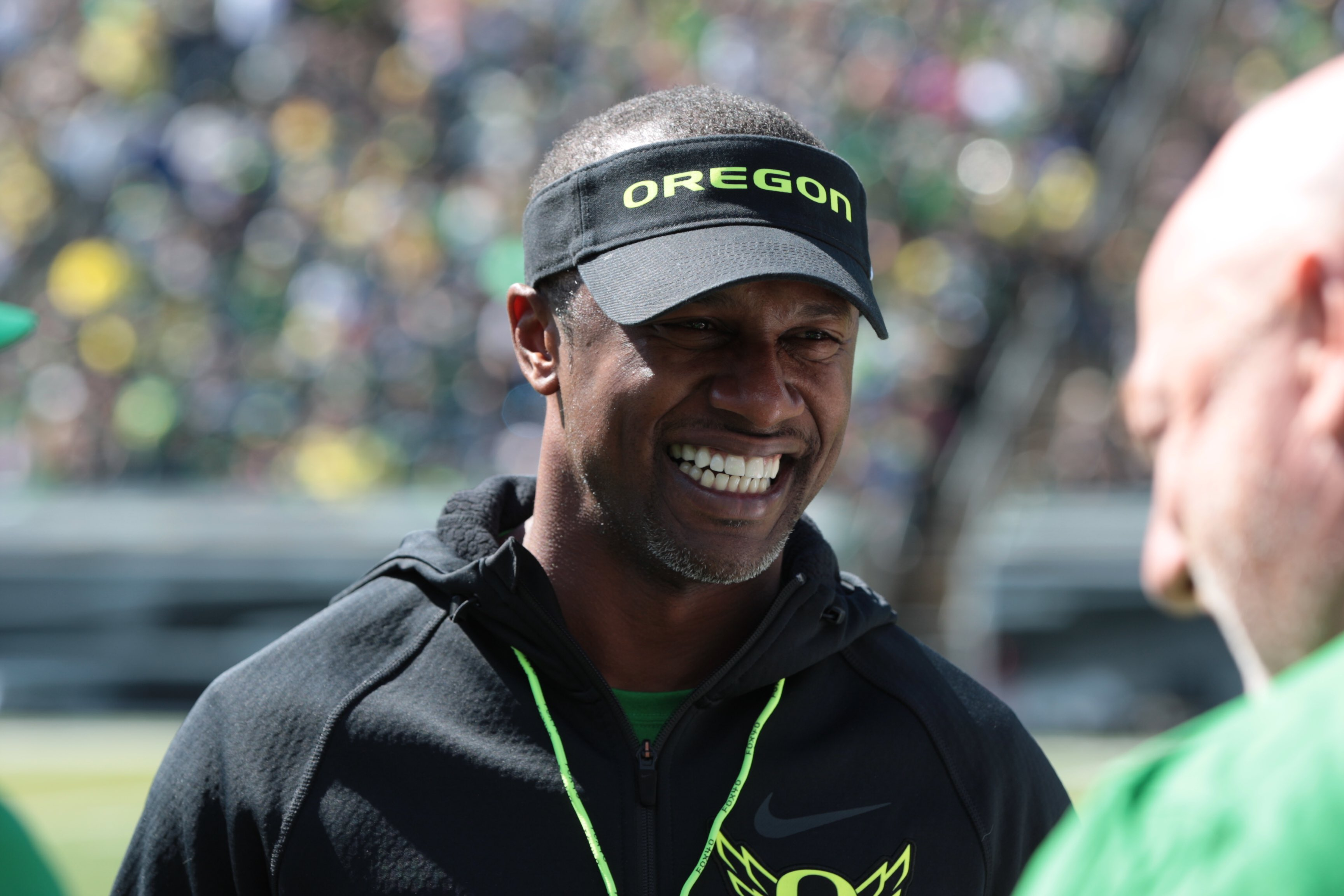 "Threee OOOoooh fiiiive, to my city, we get it."

Oregon head coach Willie Taggart is singing a Drake song that includes a reference to Miami’s area code while scrolling Twitter on his phone. His green-and-yellow Nikes lean on the edge of the conference room table.

"We need some music. Feels like an actual office in here. Can we get some music? Something with some juice, please."

"BRUUUUUUUUUUCE," the staff yells. Bruce isn’t on the phone, and the coaches aren’t being filmed. They’re just yelling.

The fax is a holiday custom, one coaches observe on this day. They aren’t actually faxes in 2017; they’re photos of signed National Letters of Intent that have been scanned and emailed, then sent to a clunky desktop printer set up the end of a sleek conference room table, all purely for the ritual. Every detail in Oregon’s Hatfield-Dowlin Complex is equal parts ruthless function and overstated luxury. The printer is neither. Holograms of committed athletes would better fit the surrounding aesthetic.

Three months ago, Taggart was taping inspirational quotes to the walls of an all-sports weight room at USF, happy to be home in Florida but stewing about stuck outside of the national title picture.

Now, he’s the captain of a billion-dollar football spaceship, which a shoe mogul landed in the Willamette Valley pines. The uniforms, the marketing, the "Puddles" The Duck commercials, the unassailable cool are Taggart’s to control. Now he can have holograms if he wants. In just under two hours, Phil Knight and a Nike phalanx will fill the other end of the conference table, just to watch.

Taggart’s entire career has been a labor to be recognized, and he has succeeded. This is Oregon. This is Nike. When he shows off the panoramic view in his office, he tells visitors, "Look at all this. Look at all the ‘no excuses.’" 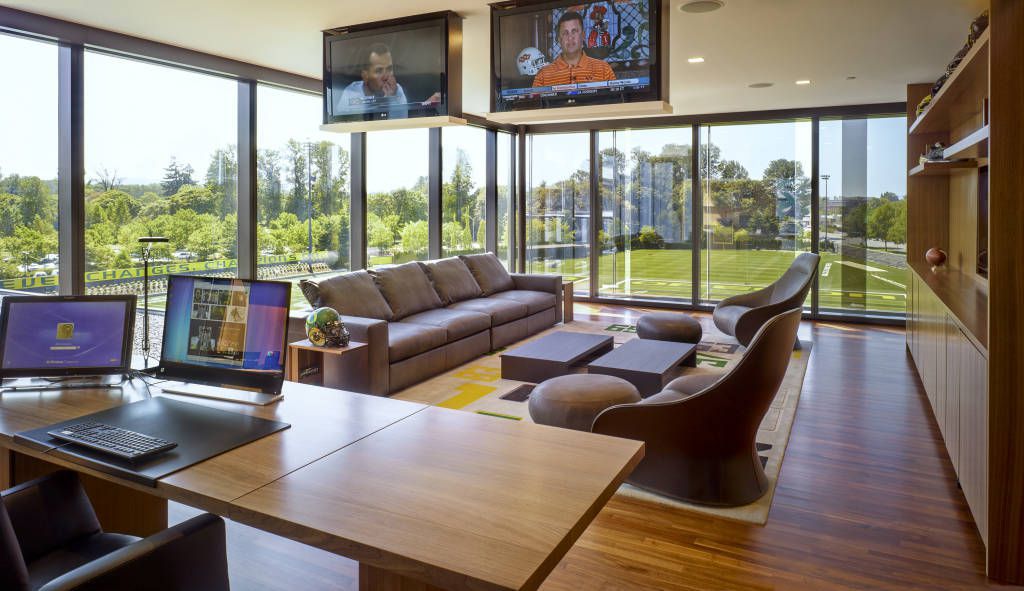 4:21 a.m. A video wall on the far end of the room is playing ESPNU, and Lane Kiffin’s monotone Florida Atlantic commercial airs. Most of the room had never seen it. There’s a round of laughter. A few staffers debate if it’s real.

Texts and calls are coming in from the Sunshine State. Half the room came with Taggart from South Florida and are still enjoying East Coast body clocks, which put the hour at a respectable half past 7.

"I can tell for certain, Hawaii is not awake yet," new defensive line coach Joe Salave'a says. "I promise you."

4:28 a.m. New offensive coordinator and former Florida International head coach Mario Cristobal sits at the middle of the table, filing through 2018 targets while a few of his new coworkers pass around a shadowbox of his championship rings from Alabama. He’s been a Duck roughly 13 days and physically in Eugene for only a handful of hours. By his count, he’s averaged three hours of sleep a night since he was hired.

In a meeting room next door is a working list of around 100 names for 2018’s class, written floor-to-ceiling the previous afternoon. He expects to expand that to around 300 in a few days.

There’s a noticeable urgency. Just days released from four years in The Process, he’s anxious get Oregon caught up to the three-year advance cycle of evaluations programs like Alabama already have.

"It’s one bad recruiting cycle now; one cycle can cost you everything," he says.

"You know Coach Leavitt was bumping this back in [the] ‘90s in that all-white ride," Taggart laughs. (For a period of time, Leavitt drove an all-white town car as a young assistant coach. He does not confirm if he indeed bumped Cube.)

"Oh man! That car, man, what a great car ..." Leavitt says, trailing off. He’s already in a full suit and completely hoarse. For the rest of the day at booster functions, he’ll tell record crowds in Eugene and Portland he lost his voice playing laser tag with recruits.

Each time, the line secures a huge laugh, then massive applause, because Oregon fans aren’t used to getting any information about recruiting. The Chip Kelly and Mark Helfrich eras downplayed the public-facing components of chasing talent and celebrating the catch. 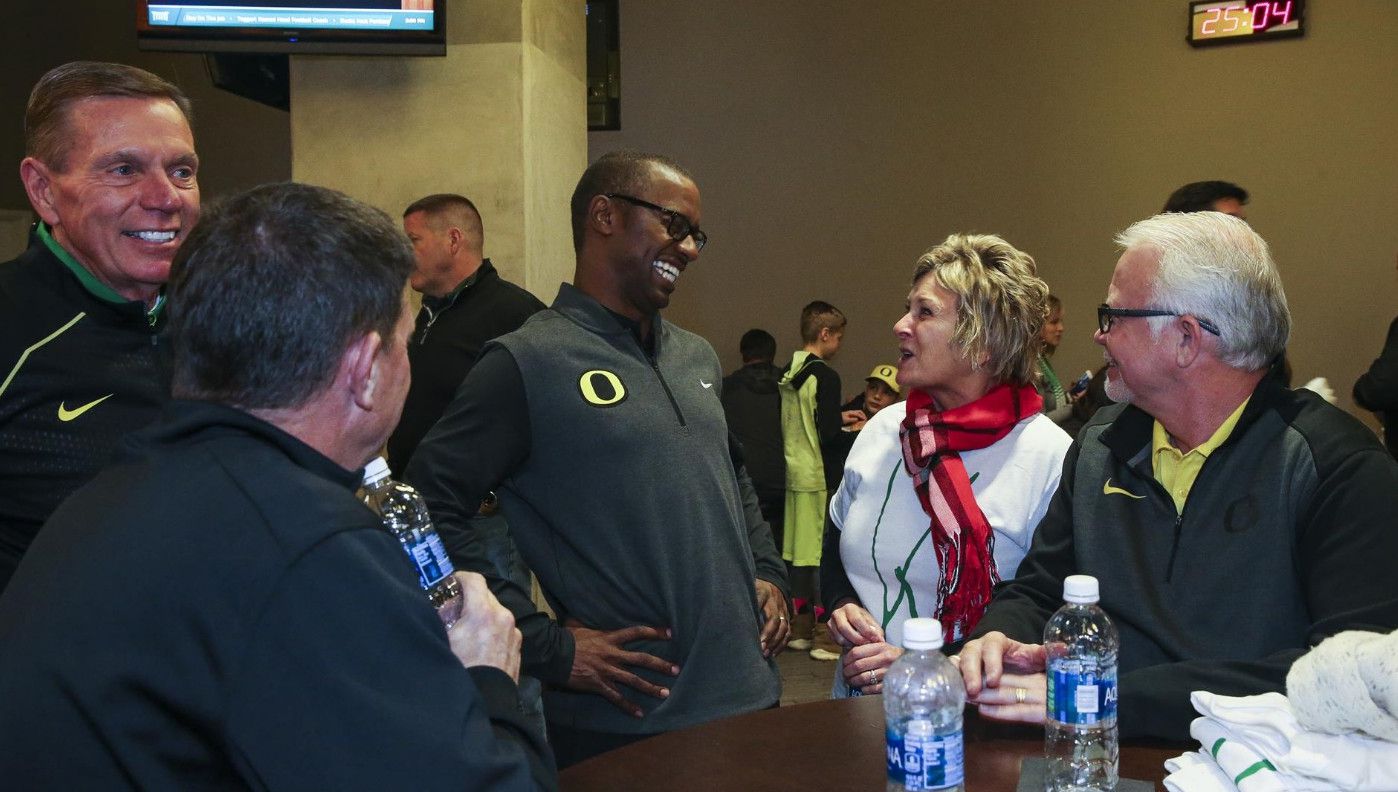 By lunch, the 24-man, consensus top-20 2017 class is sealed, save for a single player: No. 1 "athlete" (a player with an undetermined primary college position) Deommodore Lenoir. Taggart runs through the commitment list during a booster lunch at the Hilton in Eugene, teasing, "We might have more to come, and you’re really gonna like it."

The crowd murmurs, and multiple fans who follow Taggart from to Portland Wednesday evening are rewarded with a breakdown on Lenoir, who announced mid-afternoon.

"It was Lenoir! Awesome!" one Duck fan yells to another in the men’s room at Portland’s Convention Center.

If this seems like standard Signing Day procedure to you, you’re not a Duck. And that’s why Taggart is still undefeated at the moment. He and a fresh-faced staff are embracing an exuberant transparency, the goal being to pair the swagger of Oregon’s carefully innovated aesthetic with a voice that matches.

4:55 a.m. Taggart is undefeated even in the wake of two substantial blemishes to his short tenure.

Most recently, assistant head coach David Reaves, a USF carryover, was fired after only five days, following his DUI arrest on Jan. 22. Per Taggart and athletic director Rob Mullens, there was an immediate agreement to move on.

"We tell our guys: don’t go out to the bars and do those things, and then we do it," Taggart says. "David’s a good person. He just made a mistake. And we brought negative attention to our program in a situation where we already had that attention."

"I did what I thought was best for our football team. I’ll always come back to that. I always say coaches have to be mentors to our players, and that’s not being a mentor," Taggart says.

This came after a January team workout that sent three players to the hospital. Local reports stated that the workout routine was mandatory and included "up to an hour of continuous push-ups and up-downs."

Taggart bristled at the claims made in local news reports, but Oregon suspended strength and conditioning coach Irele Oderinde, a Taggart hire, and issued an apology.

"There wasn’t anything wrong with the workouts from the beginning," Taggart said. "It was a lesson for all of us, especially that our players don’t have anything to prove to us right now. They don’t need to prove everything to us at once and drive themselves into the dirt. We have to be smart about everything.

"It’s easy to perceive [we overworked the players] because we’re a new staff. The reason it’s perceived that way is that it was portrayed as a ‘grueling, military-style workout’ in the press, but it wasn’t. There was no weight lifting on that day. Just body weight. Push-ups, sit-ups, planks."

Taggart believes the negative recruiting from rivals who used the players’ hospitalization against the Ducks actually helped Oregon.

"The recruits knew the truth. We didn’t hide behind anything. They saw the negative recruiting as bogus because when they came on visits, those same young men who were in the hospital were on the players’ panel, where recruits and their parents can ask them anything. There was nothing to hide because there was nothing malicious. We’re not trying to beat anyone down, we’re trying to get better."

5:15 a.m. Nashville defensive tackle Rutger Reitmaier is awake, and his NLI is in. Salave'a is fresh from a visit to Reitmaier and so smitten with Music City, he introduces Reitmaier’s commitment, itself a win over Tennessee and Michigan, Ric Flair-style.

"Can we get some Geto Boys?" Cristobal asks without looking up from his chart.

"Could’ve been even better with even a few more days," Taggart says.

"I haven’t been anywhere yet as head coach here where at least one kid didn’t tell me that Oregon was their dream school. That this was a dream offer."

A staffer comes in to alert the room that Knight and his Nike group are in the building and on the way. The music is turned up. It’s 2Pac’s "Ambitionz az a Ridah." 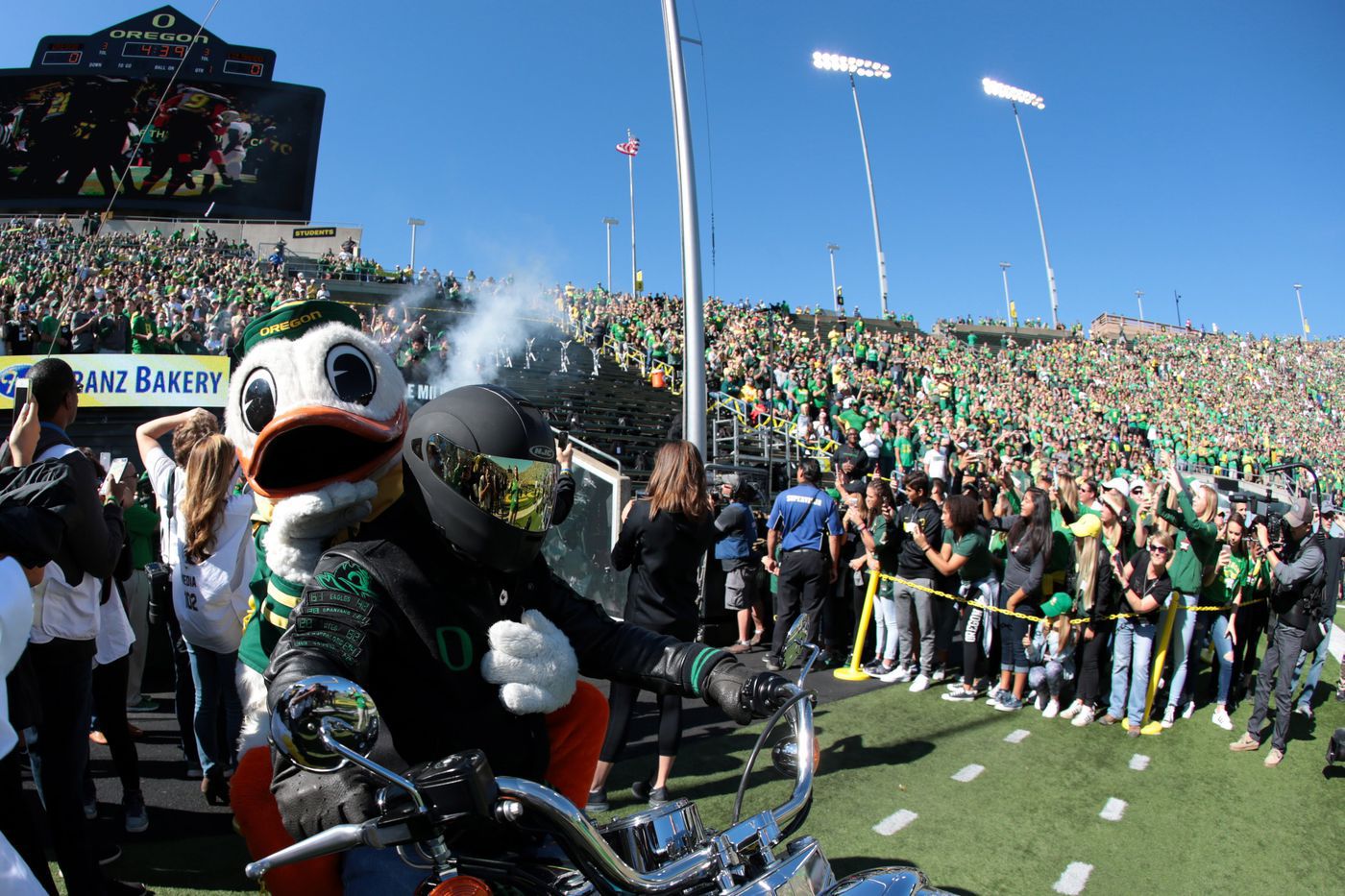