Meet the women who run college football recruiting in the South 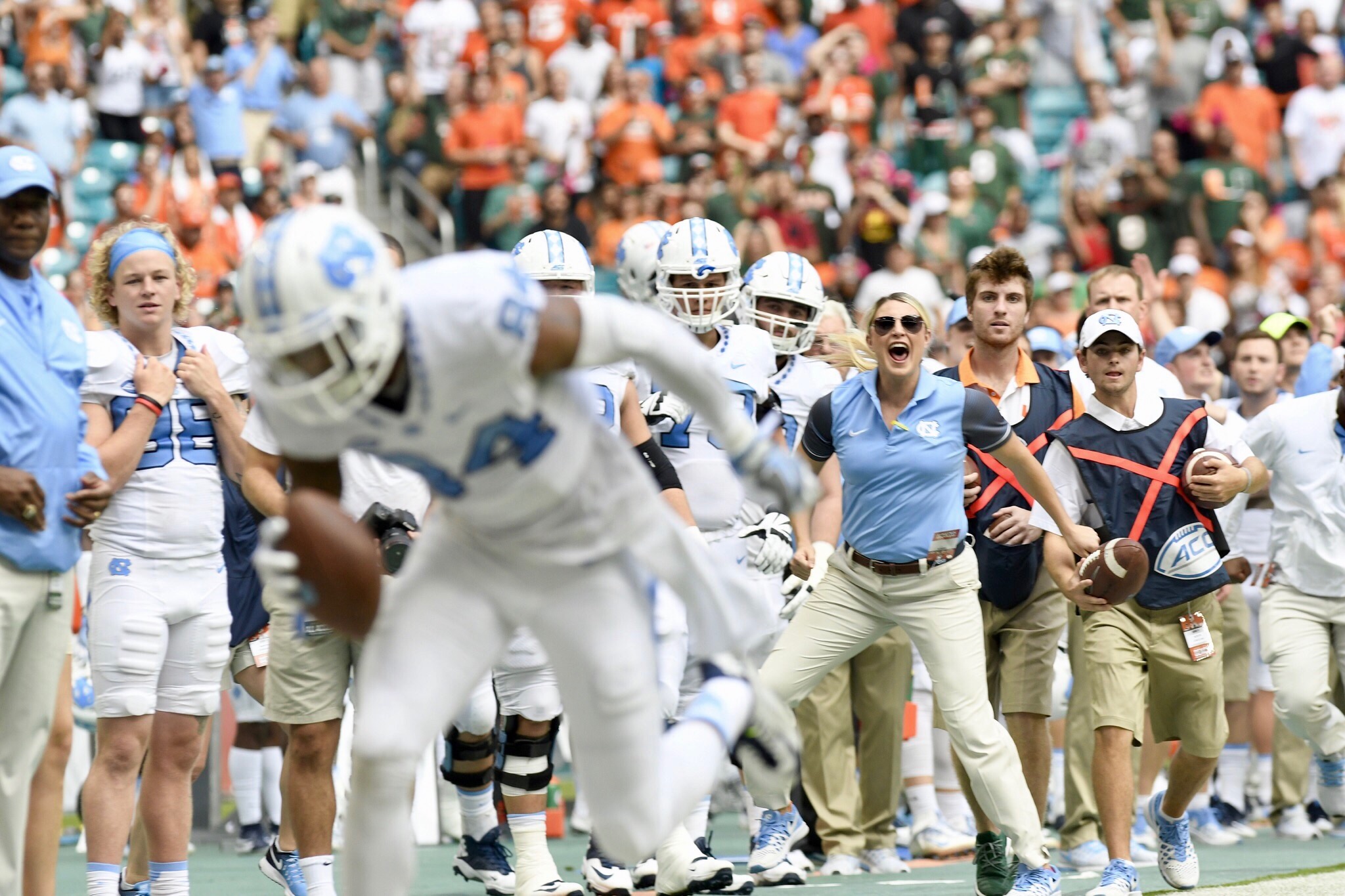 But there is a growing number of women who hold positions inside one of the sport’s most crucial departments: recruiting.

I focused on these two conferences due to the apparent frequency of women in both, compared to the rest of the Power 5 conferences at this time. I found five in the Big 12, one in the Big Ten, and four in the Pac-12 while reviewing staff listings earlier this summer. Women have recruiting jobs in conferences outside of the Power 5, too.

I spoke to five of these women.

Jackson joined South Carolina’s staff when Will Muschamp was hired in December 2015. Along with handling on-campus visits ...

"Any time a recruit comes on campus, it pretty much comes through me," Jackson said. "I plan out their schedule, who they’re meeting with, what time they’re meeting with who, when they’re going to see Coach Muschamp, when they’re going to see their position coach. I’m the first face they see when they get on campus. I’m the one handing them their name tag."

... a big part of her job involves eligibility.

"A lot of these guys, they come from absolutely nothing. They don’t have anything. For them to be able to come here, especially on official visits when we can cover the cost of things, some have never been on an airplane before, never stayed in a hotel. It’s the littlest things that most people take for granted that most of these kids have never done."
— South Carolina’s Jessica Jackson

Jackson worked at Alabama’s recruiting department as a student assistant for four years and had internships with the SEC and Peach Bowl.

"I learned everything that I know right now from that office," Jackson said of Alabama. "It’s such a knowledgeable place. If you’re even there for a day, you’re going to leave with so much more knowledge and understanding of the business."

White has been at Vanderbilt for almost 14 months, and her role requires versatility. She’s one of two assistants, handling everything from on-campus recruiting to sorting through prospects and organizing prospects on the offensive board.

"I do everything that involves scheduling," White said. "Just all of the logistics, getting kids in and out, meeting with professors, non-coaching staff members, academic counselors, strength and conditioning coaches, and then their actual position coaches as well."

That includes finding other interests prospects have to make their visits as personalized as possible.

"When Coach [Derek] Mason hired me, that was one of the reasons why he brought me in, was because he thought that I could bring in another perspective," White said. "And at the same time, he demands a level of excellence and professionalism from us, but he also gives me the freedom to be myself and to let the ideas fly."

Before Vanderbilt, she was a graduate assistant coach for women’s soccer coach at Valdosta State, where she hit the road to recruit players.

"It made for a fairly smooth transition in terms of feeling comfortable talking to recruits," White said. 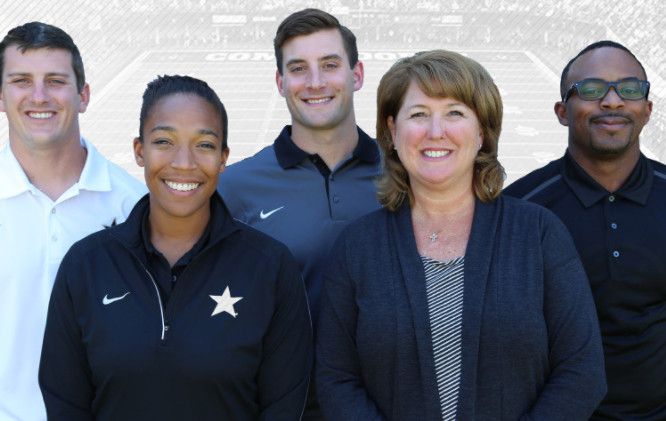 White is also responsible for overseeing Vanderbilt’s recruiting database, which required her to gain a better understanding of coaches’ evaluations of prospects.

"When I needed to input information about recruits into our system," White said, "I felt like I needed to have an understanding of what our offensive coaches’ evaluations actually meant. So going to practice every day or asking the guys on staff to show me what it means when a prospect ‘had good COD’ or ‘bends well’ or something as silly as knowing the difference between ‘long vs. tall’ was important to me."

Prior to her recent promotion, she served as the director of on-campus recruiting, a position she held for two years.

"The buy-in as it relates to our coaches is far greater than some of the other places I’ve been," Hanson said. "Which is really great and exciting because it gives people like me the opportunity to really run with projects."

Hanson also will be more involved with fundraising and facilities projects, and she’ll still execute on-campus football recruiting, such as Saturday visits, junior days, and other special events.

Working for Vanderbilt football has made up the entirety of Cain’s career since the 1990s. One of Cain’s responsibilities is checking hundreds of transcripts to help find players who can meet Vanderbilt’s high academic standards.

"I think that is a balance that we have to do," Cain said. "But it’s not a challenge because there are enough kids out there that can compete in the classroom and on the field. We just have to find them. And that’s part of the job."

"I can go back until back in the ‘90s, of parents that I still keep in touch with," Cain said of the most rewarding parts. "The relationships are priceless. And with the coaching staffs that have come and gone, I’m still friends with them and their family."

"Those ladies have been able to find our blind spots at Vanderbilt and make it better," head coach Mason told me about Cain and White. "As I look at it in 2017, they’ve been the unsung MVP of why that class has pushed forward. I really appreciate who they are and what they do, but again, I think I have to be comfortable letting them do their jobs and do what they do best and really just trying to put the resources in front of them for them."

After this interview, White moved into Vanderbilt’s marketing department.

Kenzie sets up visits and game days for recruits and assists wherever else she’s needed.

"I work alongside of the associate director of player personnel, and we work hand in hand, and he tells me who’s coming, who needs what," Franklin said. "I also coordinate with the hostess program — making sure tours are set up, making sure academics have their plan together, what they’re going to talk about with them — just kind of getting everybody on the same page.

"Once we get into December [and] January, we’ve got our official visit season. That is a lot of intense event planning. You’re putting together individualized plans for a weekend for 15 to 20 kids." 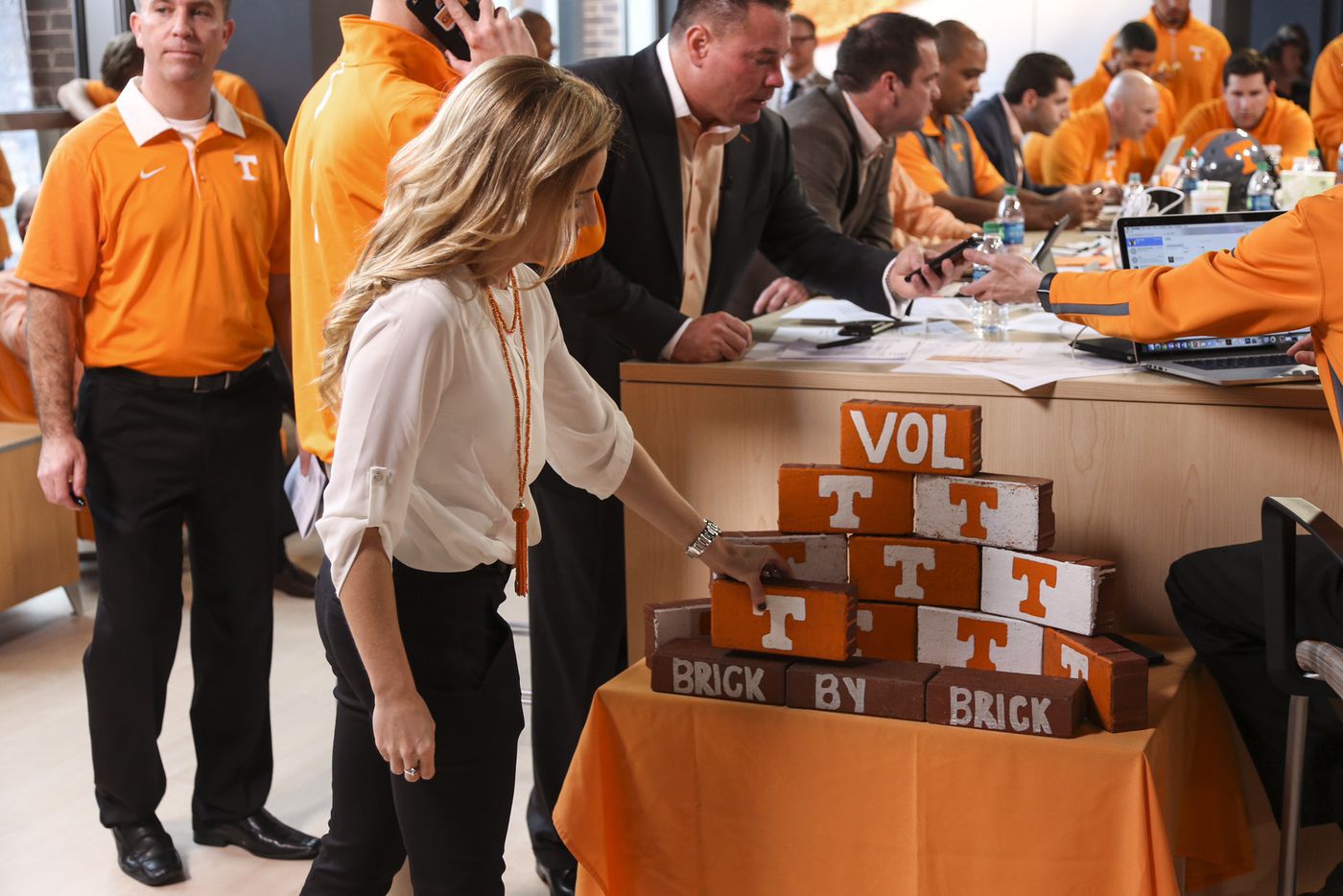 "One day it could be a boring day in the office," Franklin said. "But the next day, you’re there ‘til two in the morning, decorating a dorm room for a tour."

I asked all five women about any challenges they’ve faced while working in man’s world.

Most responses centered around differences when pitching ideas or clarifying roles.

"Especially with me being new," Franklin said, "I don’t have a track record that proves my work or anything, so I think just with the coaches, just letting them know, ‘I’ve got it. My way will work.’ It’s hard gaining their trust, and I think that may come with time."

"You’re not ever going to be that super-hyper masculine kind of character that coaches are — and that’s why we love them — but that’s OK. It took a while to figure that out, but now that I’m starting to see it, it’s made me a lot more comfortable in what I do."
— Vanderbilt’s Donielle White

"I’ll be the first to tell you that it hasn’t been easy," Hanson said. "There’s definitely times that you do still feel like there might be a little bit of a barrier, but Coach [Larry] Fedora has done an incredible job of integrating me into our staff."

White said she had to be more conscious and up-front telling people what exactly she does.

"Just making sure that people understand who I am, and I’m not just like some little girl that’s kind of hanging around," White said. "Because what will happen, especially over the summer, sometimes I’ll end up giving our campus tours, just because we don’t have that many students around. So that first summer, I got that a lot. I was like, ‘I think I need to just be more forthcoming with who I am instead of letting people assume something completely different.’"

Most of these women mentioned strong female mentors who helped them navigate their careers. The ACC is now facilitating discussions between women in athletic departments.

"One thing this past year we did, the senior associate ADs that were women, actually put together a women leadership/mentorship program," Hanson said. "I was given the task of calling one female leader once a month from all the ACC schools and talking about the challenges." 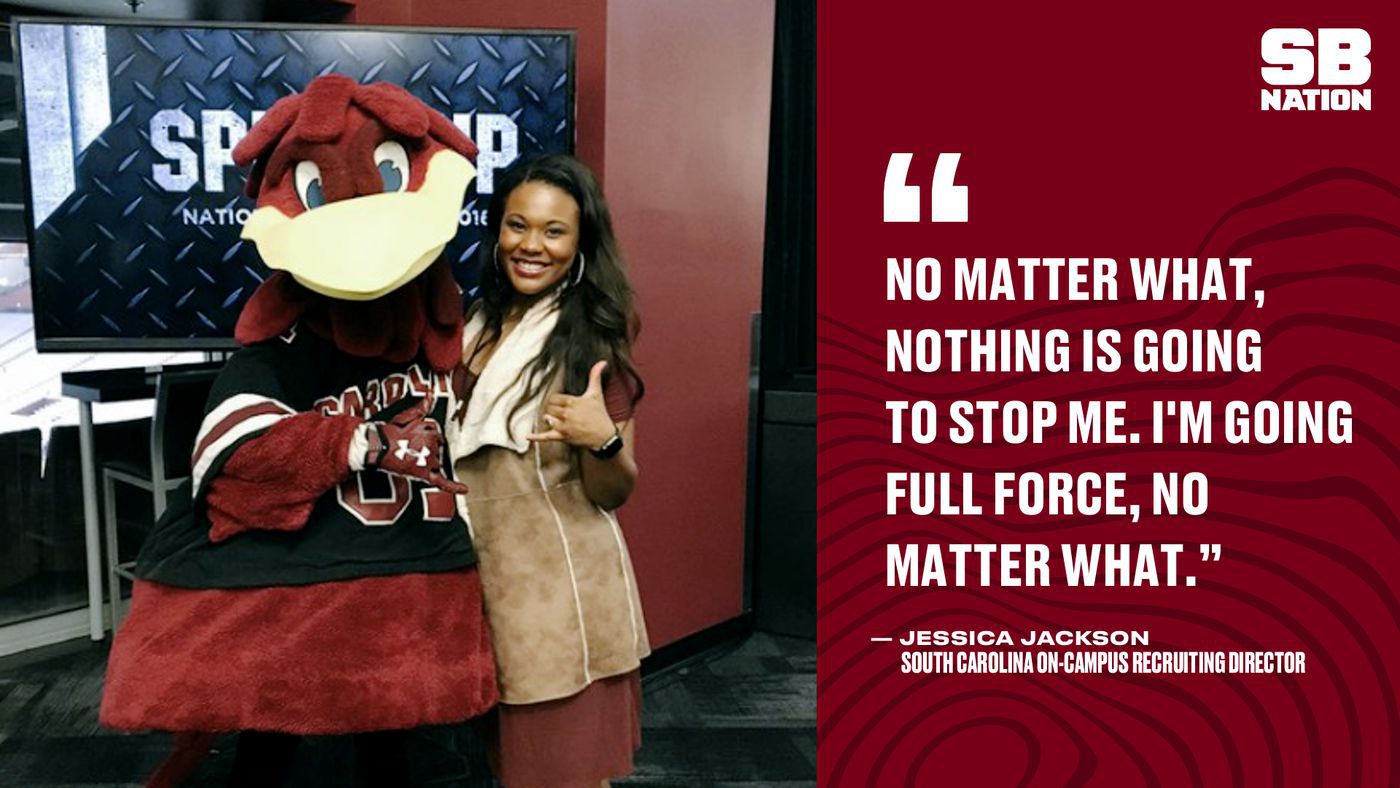 "The sky’s the limit," Jackson said. "If I can get a position this young, I really don’t see myself ever stopping."

After just two short years at UNC, Hanson now has an associate athletic director role. Every job she’s taken up to this point has been calculated to get to where she is today.

"It’s always been my No. 1 goal to ultimately serve as an administrator at the Division I level," Hanson said. "And all of the moves that I’ve made have been pretty intentional and strategic — the people I’ve aligned myself with, jobs and tasks that I’ve chosen to take on — and you have to navigate whatever you feel is best."

"I never feel uncomfortable or notice, ‘Wow, I’m the only girl in this entire staff room,’" Jackson, who exudes confidence, said. "That never really crosses my mind, because we’re all there to do a job.

"I feel like anybody, if you’re going to work in sports, you know how to conduct yourself. You know what comes with that territory. But I never really experience that. No matter what, nothing is going to stop me. I’m going full force, no matter what."