It was big news when former Big 12 mates Nebraska and Oklahoma announced a home-and-home series. It was slightly less big when they revealed two of the games would take place in ... 2029 and 2030.

Schedules are being booked up to two decades in advance. Ten years ago right now, Tim Tebow was prepping for his first year as Florida’s starting quarterback, and USF was about to move to No. 2 in the AP poll. A lot happens in 10 years.

We have no idea how good a non-conference foe will be; we just have to roll the dice and hope for an interesting matchup. Sometimes the timing is great, but often it isn’t. Meanwhile, at least one member of the Playoff committee has said "scheduling intent" can have an effect on your standing.

We could also use a way to help the Playoff committee with one more key data point.

The goal isn’t to get a No. 1 vs. No. 2 and ding the CFP qualifications of a random road team. It’s to create quality matchups and equalize strength of schedule. It’s a merit-based non-conference scheduling method.

Imagine this happened in 2016.

Imagine the random home-road designations were based on the alphabet, though we could base them on whatever; the first 64 teams alphabetically are at home in year 1, on the road in year 2.

Based on the rankings eight weeks into the season, we would’ve had this top tier:

If you remember how the rankings had taken shape that time, you’d notice A&M-Louisville would’ve been a battle of top-seven teams, Wisconsin-Auburn would have been No. 8 at No. 9, and Washington-Florida a No. 5 at No. 11.

I don’t know, do you think that might be an interesting change of pace in the middle of conference play?

Granted, it would also result in matchups like Kent State-Texas State or Rutgers-Charlotte. But it’s a relative quality win opportunity for those schools as well. 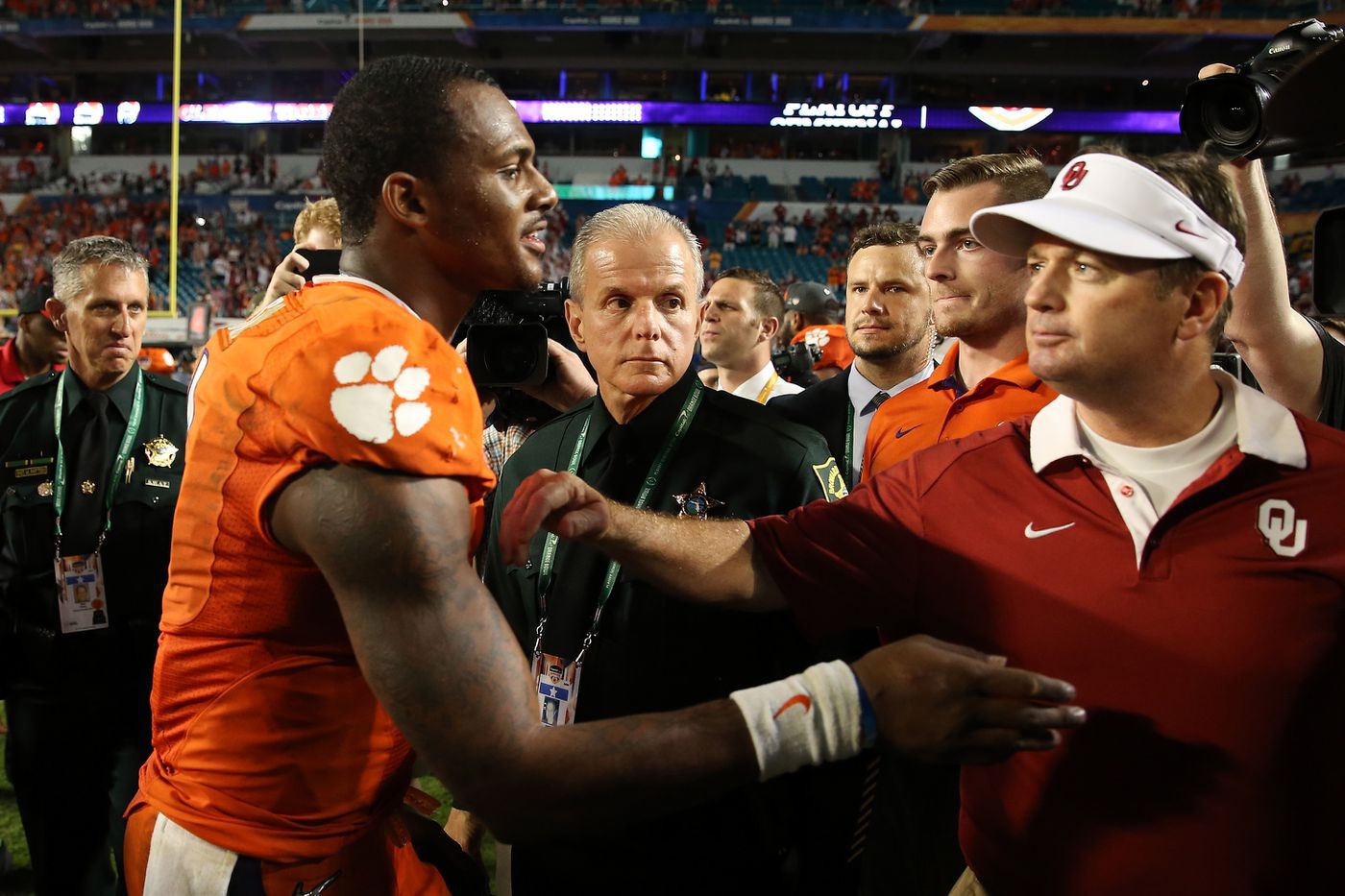 So in addition to this, I would recommend eight-game conference schedules.

Limiting conference games to eight increases connectivity among conferences, especially if you’ve got this randomized Bracket Buster weekend baked in, and I already plan to fix conference schedules by encouraging pod scheduling. (Of course, conferences would still be free to play nine, if they prefer.)

Getting all of this worked out from a TV standpoint would be tricky, though broadcasters would know months in advance which home teams they’d have rights to. And if we want to ensure extra bye weeks for road teams, we’d have time to figure that out.

I would also recommend eight-game conference schedules for another reason: the circle of life.

Could we go even further and have a schedule overseer, like a pro league has?

Sure! Perhaps each school declares three or four rivals they’d like to play annually if they happened to get separated by different relegation tiers and announces any special scheduling deals they'd like to request, and then the schedule master announces the season’s full schedule in mid-February.

Also, we should maintain once-per-year scheduling of FCS opponents, but tweak it.

FSU’s Jimbo Fisher had this to say about big schools scheduling smaller opponents:

"I'll make a statement and if people don't like it, fans [don't like it]: If you don't play an FCS ... how do they make their budget? By playing a big school. How's the Division IIs make their budget? Playing an FCS," Fisher said. "When you start taking these budgets away, where are all the high school football players going to go? Why are they going to play football when all these teams drop football? You're killing the sport for ego."

FBS schools play FCS schools for easy wins, home game revenue, and playing time for backups. FCS schools get money, trips to big stadiums to sell to recruits, and program-defining upset chances. There is a similar relationship between FCS and Division II.

These aren’t incredibly enjoyable games for fans, and coaches have to figure out how willing they are to risk injury. It’s only part of a real game, as long as you’re not in danger of an upset.

Still, these are necessary for the ecosystem. The American Football Coaches Association (AFCA) had an idea I enjoyed.

#AFCA proposes a new eligibility model, still 5 years to play 4, but if athlete plays less than 4 games in a season can be redshirted. pic.twitter.com/AaTufUvHDp

But if you wanted to drum up interest for games against lower-level teams, "Come watch some of your future stars!" would help.

There are plenty of options if you want FCS teams to generate revenue but don’t want games against them to count as part of the FBS season. Hold a less formal preseason game against a lower-division team? Incorporate these into spring football? Make a regional event out of it with a bunch of local schools?

Let’s talk. But let’s keep the circle of life going.