There were dozens of fascinating components to the Cotton Bowl between Baylor and Michigan State, not least of them the touchdown scored by LaQuan McGowan, an offensive guard billed as 6'7, 410 pounds.

McGowan, a massive human being, is not the kind of guy teams have traditionally used for running in space. But in the wake of his stunning receiving success, he's officially listed as a tight end as of this spring.

Baylor was already making innovative use of big tight ends by moving another OL to TE in 2013, the 6'6, 270-pound Tre'Von Armstead, now a co-starter with McGowan. As big as Armstead was, though, this represents an increase of 140 pounds.

With their huge frames, McGowan and Armstead had obvious promise for Baylor's veer-inspired run game as OLs. Briles referred to McGowan as "2034," believing that by that year it'll be common for linemen to be this massive. But when the coaches observed McGowan playing catch with the QBs before practice, snagging bullets with a single paw, they realized that with some imagination he might be able to offer the offense something at a different position.

So how can Baylor use this bear-sized Bear in Briles' unique offense?

As a run bludgeon

Part of the difficulty in defending Baylor is the way it isolates opponents both in space and in tight confines. The Bears are at the forefront of spread-I tactics that combine spread formations, two-back run plays, and vertical passing to create stress all over.

In the middle, you have six blockers packed in front of the QB and RB. But the receivers are all outside the hash marks. The amount of space between the receivers and the run game personnel is considerable.

And the receivers are track stars who look to run past the coverage on every snap, so you have vertical stress as well. Defenders have to worry about keeping receivers in front while also getting hats to the ball in that middle cluster.

The defense's common response? Spreading out its defensive backs and deploying linebackers fast enough to watch the pass while chasing the run.

In anticipation of smaller defenders, Briles can unleash McGowan at H-back. 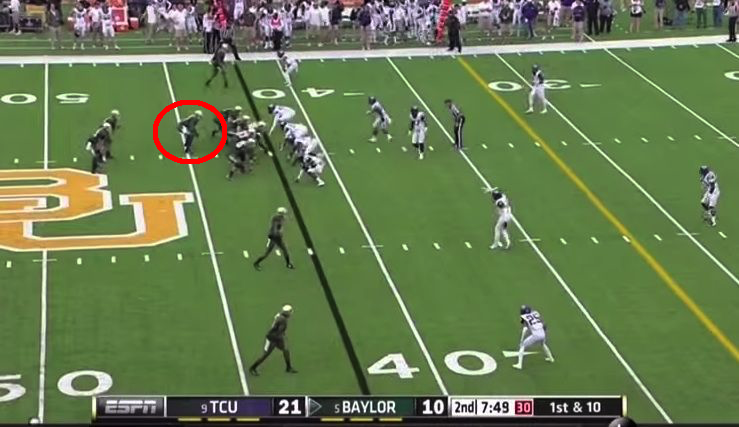 It's hard enough for spread teams to handle vertical routes from a three-receiver set in a spread-I formation, but when the mobile bludgeon is 410 pounds? Game changer.

Baylor has a variety of ways to use the TE/H-back in its run game. Here's an example of Armstead (right behind the Baylor OL) using his 270 pounds to pancake a TCU defensive end on a zone slice:

The weak safety is in a hopeless situation. Get downhill to help to stop the run or help double the WR? Since Bryce Petty also has the option to throw a fade route (which he takes), the safety is in no position to help. Six points.

Baylor doesn't just pack that mega-back on the line or in the backfield. Baylor will also spread McGowan wide to have him hammer helpless defensive backs trying to make tackles on screen passes. Corners don't enjoy blocks by 210-pound receivers, let alone someone almost twice that size.

As a mobile shield

For instance, in those spread-I sets, when Baylor wants to play max (seven-man) protection and send three receivers on vertical option routes:

Petty focuses on a high-low read to the field side (the right, in this case).

With the offensive line sliding to the left tackle's side and then filling in the right with McGowan plus an RB, there's no soft spot for the defense to attack.

Vertical and option routes, which take time to develop, are important in Baylor's offense. Having the ability to build an unscalable fence around the QB is a huge boon. 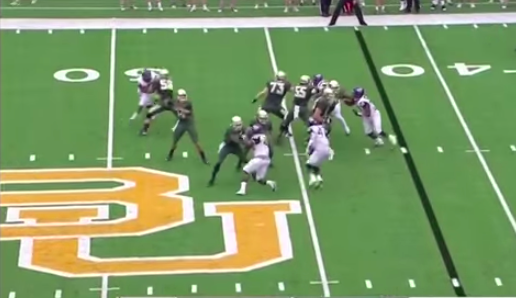 As a situational receiver

This is where fans and pundits get most excited. The vision of a 410-pound man running free and dragging would-be tacklers into the end zone is a fun one to picture, but not one Baylor fans are likely to see very often.

Generally what happens when a large person is running is that someone takes him out at the legs and those 400 pounds combine with gravity. And it's not that difficult for a responsible defender to keep a former offensive lineman from getting open, no matter how quick the big man is for his size.

However, he'll still gain yards. McGowan's hands suggest he could be a valuable third down and red zone target. He could post up defenders like a basketball center and use his frame to bring in passes, then drag defenders past the sticks.

In Baylor's red zone game, the TE play-option pass is already a devastating weapon. One of the Bears' favorite tricks is to use a Patriots-type unbalanced line that makes it easy for the TE to become a forgotten receiver: 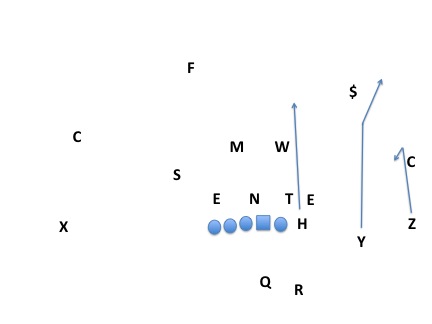 Even without the trickery, the defender in charge of covering the tight end on pop plays has little time to make a decision. With McGowan now on the field, that defender's well-being might be on the line. If that defender wants to blow up the block, he'd better come hard and low. But if it's a pass? Doing so will mean McGowan can slip by for an easy first down.

These moments might not be a regular feature, but when they happen, they should be enjoyable.

Once again, Briles' ability to parse the game down to assignments and spot the players that have the best skills for those assignments is pushing the game forward. As we all know, anything that leads to more fat man touchdowns is progress.