College football championships have been for elite recruiters only. Will the Playoff alter that? by Bud Elliott @SBNRecruiting

Parity is a sell in professional sports. Over the last 20 years, 38 percent of the teams in the NFL have won the Super Bowl.

Not so in college football, where roughly 11 percent of FBS teams have titles in that same span. Every year, most programs start out knowing they do not have a reasonable hope of winning the championship.

The reason? Recruiting. The vast majority of teams simply cannot recruit championship-caliber talent. Over the last decade, or about the entire history of reliable recruiting rankings, that benchmark has been bringing in more four- and five-star recruits than lesser-rated players in a four-class cycle.

And since those blue chips are rare -- roughly 350 per year, with more than 10,000 FBS scholarships to fill nationwide -- the teams that get blue chips tend to beat those that don't.

Success requires managing coaching, attrition, development, scouting, support and a host of other factors. But even then, it is hard to stay elite if you're not bringing in a lot of top talent.

What percentage of signees for each contender over the last four classes is made up of blue chips? And what can we learn from that?

The 2015 national champion is very likely to come from these 12 schools.

There are few surprises. Nick Saban's Alabama has signed the No. 1 class for five consecutive seasons. Alabama inks better players than anyone else. Its 78 blue chip signees in the last four classes is 11 more than any other school.

While USC's percentage is excellent, NCAA sanctions meant the Trojans signed just 71 total players over the last four years, about 24 fewer than the average at other top schools. That means USC has signed roughly three full classes over four years. Could a lack of depth sink the Trojans in a competitive Pac-12 South?

Ohio State has signed the second most elite players (67) over the last four years, and it has hit home runs at QB. And it's only getting better, as Ohio State is one of the favorites to stop Alabama's run of No. 1 recruiting classes.

Notre Dame has not exactly been a consistent title contender, but Irish recruiting is impressive given its academic standards and lack of in-state talent. With a lot of returning starters, this could be the year for Notre Dame to contend.

On the other side of this spectrum, Michigan and Texas are examples of what happens when schools recruit good players but have failures in coaching or development. Counting Texas A&M, which needs to turn its blue chips into a defense, most casinos are not even offering odds on the trio to make the Playoff.

A few of these teams are not quite past the 50 percent threshold, but have had a lot of success.

Oregon is the headliner, as only four teams from the first group have better odds of reaching the Playoff. The Ducks do a great job of overcoming their disadvantageous location and signing players to their scheme. They've reached two national championships in the last five years, losing each to a team with better recruiting.

Clemson was picked by ACC media to win the conference, and any winner of a power conference has a good shot to make the Playoff.

Florida should soon be back in the top group if new coach Jim McElwain is able to take advantage of the talent in the Sunshine State. Tennessee is a major climber in this group, having brought in almost thrice the number of blue chips in the last two classes as it did in the previous two.

What about Baylor, TCU and Michigan State?

Three teams ranked in the top 10 in most preseason polls are notably missing from the above lists.

All three have trended up in recruiting, but they are not yet signing elite recruits at a high level. They are, however, very good at scouting and recruiting to their systems and are filling their rosters with better players.

In terms of Playoff odds, Baylor and TCU are helped along by weak schedules. Strength of schedule might matter in December, but getting to 11-1 to begin with is more important, and few power-conference teams have better chances to reach that mark.

Given the success of Baylor and TCU and the failures of the Longhorns, it's worth wondering if recruiting rankings in the state of Texas have been less accurate than those in other states. But that's a topic for another day.

Here are power-conference teams with changes of more than 5 percent in their blue chip ratios since last year.

UCLA and Arizona State might make things tougher for USC, though USC is also trending up. Elsewhere, the Big Ten East is going to be nasty in the coming years, with Ohio State rolling along, Michigan turning around, and Michigan State and Penn State rising.

All four teams here with downward trends have changed coaches within the last two seasons. Nebraska falling off in recruiting is not doing much to change the Big Ten West's reputation as the worst power-conference division.

Four leagues are within 5 percentage points. And then there is the SEC, which is way out in front, bringing in three blue chip prospects for every two that the next best conference does. 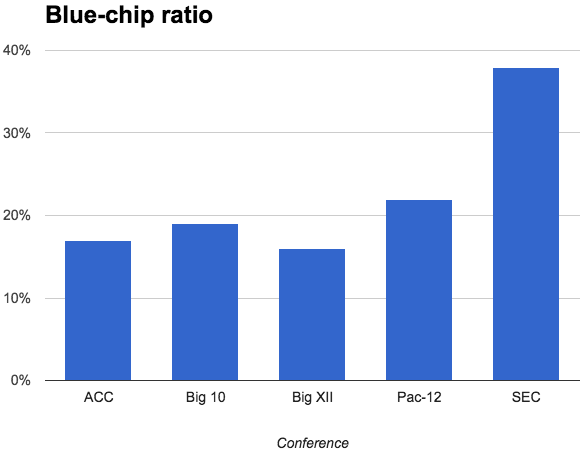 Will the Playoff be more inclusive?

On the one hand, the Playoff probably doubles the chance that a non-super recruiter can win it all, simply by including more teams. And in the BCS system, polls that might not give credit to schools without much winning tradition, like Baylor or TCU, were official factors.

On the other hand, the Playoff likely means that the national champ must defeat two schools in a row that recruit around the level of recent national champions. Last year, Oregon was able to beat Florida State, a team with superior recruiting, but lost to likewise elite recruiter Ohio State.

In short, it is likely going to be easier for a non blueblood program to get a shot at a title, but tougher to actually win once it gets there.

Note: Player ratings are from the 247Sports Composite, which blends ratings from 247Sports, Scout, ESPN and Rivals. I tried to confirm accurate data for every team. This does not include walk-ons or players who never signed scholarship papers.

Get all kinds of college football stories, rumors, game coverage, and Jim Harbaugh oddity in your inbox every day.