BOISE, Idaho - Southwestern Idaho should be incubating conspiracy theories about college football's establishment. Or at least fresh concerns that an undefeated 2015 Broncos team could get jumped by a one-loss power-conference school in the Playoff rankings.

Instead, the new head coach doesn't wince when conversation turns to mid-major bias because, well ...

"Out here it's not really talked about that much," Bryan Harsin said.

"Just like it has for the Fiesta Bowls we’ve been to, when the cards fall right and an undefeated Boise State’s sitting at 5 or 6, and when things change in the top four that next week, well, maybe it’s time to put Boise State in and see what they can do."

Arguing the Broncos’ big-time-BCS-worthy-Top-25-caliber-eliteness has become a ritual for the rest of college football, ushered into 2014 when Harsin's first team won the program's third Fiesta Bowl.

If you're a high school recruit, it's a null argument, because you were 10 years old when Jared Zabransky's Statue of Liberty to Ian Johnson beat Oklahoma. Trick plays and Pro Combat uniforms and primetime ESPN games are awesome. And no matter where you grew up, you've YouTubed almost as much Boise State as you have Alabama or USC or Florida State.

If you're 18 years old, Boise State's awesome and always has been.

Is Boise State elite? Hey recruit, look at the brand new $22 million Bleymaier Football Center. You can stand at the pavilion and see the beautiful Stueckle Sky Center, a luxury seating expansion added in 2008 for $135 million. That's where fans will watch six national Friday games this season.

Compared to its peers, at least

And speaking of Wazzu, did you know the Boise just beat Mike Leach's Pac-12 Cougars for Brett Rypien, a WSU legacy and nephew of Super Bowl MVP Mark Rypien?

"We're starting to get players that we couldn't get before who still share the mentality of being hungry to win, to prove yourself. It's just that now they're a few inches taller or a few pounds bigger," said running backs coach Lee Marks, a former Bronco player.

"You don't have to explain who you are. It's pretty amazing when you walk into a California high school now with the Bronco on your chest and kids say, 'Oh, I'm all about Boise State. I've always wanted to play there.' Or when I get a text from a kid in New York who tells me they grew up a Bronco fan."

Rather, Boise won. The city, the state, the school, the team and the fans, who mill about town in caps and sweatshirts with more BCS bowl logos than your power school's entire media guide.

Linehan is wandering the sidelines of a Friday practice with close to a hundred other former Broncos. It's alumni day, and the Fiesta champions practice with all the seriousness and security of a high school team. The P.A. bumps hits from Naughty By Nature and Guns 'N Roses, assumedly as an homage to the guests, who slap backs and poke love handles, sharing notes on middle age.

"It's pretty loose. This is about as loose as it can get. The intensity can go up when it's needed, but it's normally laid back. Guys know what to do, and they go do it," Linehan says. 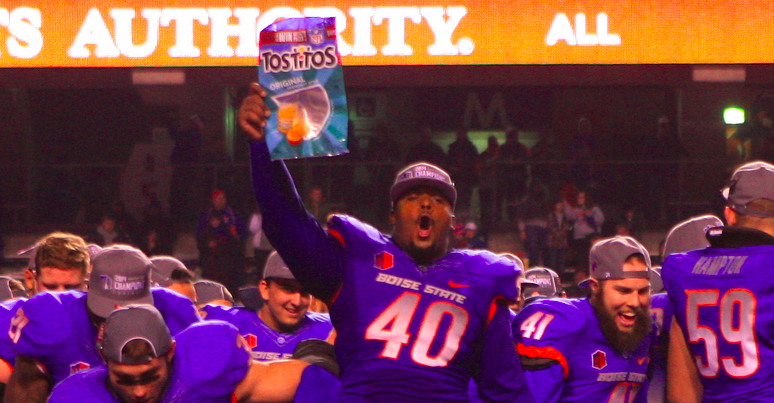 Celebrating another trip to the Fiesta Bowl, which is no longer sponsored by Tostitos. Brian Losness, USA Today

After 2014 Boise was upset in a five-interception outing against Air Force -- Harsin's second loss in five games as head coach of his alma mater, "the dream job" -- he ordered his team to begin practicing ... happier.

"We were pushing a little bit, I think. After the Air Force game we went back to having fun. The only challenge we set for our players and our coaches was to go 1-0. And then over time we did that, and hey, we ended up in the bowl we wanted to be in any way."

Underdog BSU enters as the favorite ...

... to again be the non-power representative in the New Year's Six bowls. Last year's Fiesta has become the floor for expectations, with 18 returning starters, despite almost all the production at quarterback and running back needing replacement.

The quartet is near the 10-yard line with new coordinator Eli Drinkwitz, competing to land passes in a garbage can.

"All right gentlemen, let's have a good, clean competition out here today!" one of them yells.

Passes skip off the can (which apparently counts for partial credit) or sail just past. Stuart makes a bucket. More land. A day later, all four play through a sloppy spring game in which Finley sees the most first-team reps during multiple downpours and lots of turnovers.

"See, I know it might feel like it, but calling practice here 'light' or 'loose' doesn't do it justice, because there's a lot of intensity out there," Linehan says from the sideline. "I can tell you."

Harsin thinks the definitive Boise mentality started when he was a player. Head coach Pokey Allen had prepped the program for a jump to Division I in 1996 but passed away from cancer. Houston Nutt came and went in one 4-7 season in 1997 on his way to Arkansas, and Oregon OC Dirk Koetter inherited the team.

"He was angry," Harsin said of Koetter. "Basically, he gathered us up under a goal post one day and told us how we weren't any good. We were a complacent football team that didn't work hard enough to earn the recognition we wanted."

Koetter, Dan Hawkins and Petersen would build that into a Cinderella. The mantra was to shut up and love work.

At first it was all the cliches: project players ignored by power schools in the Northwest and California, talent overlooked for size but not ability. Then, per former players like Linehan, the focus evolved from putting a chip on the shoulder of scorned BCS talent and toward "O.K.G." candidates, or "Our Kinda Guys."

Recruits had to be vetted for an on-the-fly processing ability. Harsin and Petersen demanded players adjust to calls in real time to confuse first and execute second.

"If you watch our sidelines at practice, you don’t see three or four guys moving in and out with a personnel grouping; you see about 30," Harsin said. "You might have 10 or so of those guys who have just one play, but they don’t know when it’s going to be called. When that one play is called, they’ll go execute to their best of their ability, and now they’ve contributed. They’re part of this. Part of the culture that if you deserve to play, we’ll find a role for you or we’ll create one."

The offense changed when Harsin left for Texas in 2011. The Broncos huddled less. Look at a number on a card, line up and go fast. The shift towards college football's norm lessened Boise's advantage.

When Harsin returned, so did the glory-era attack, mixed with Stanford's power running. Now Harsin said his staff is stripping down the playbook and rebuilding. None of the staff wants to assume success will automatically carry over.

"You're poised but paranoid," Drinkwitz said. "What happened last year has nothing to do with this season, but it gives you faith that you can coach, that you can get things right."

Broncos are as loaded as ever

The 128-team countdown previews what's once again the best-looking non-power in the country, by far.

What the 2007 Fiesta Bowl meant

What the 2007 Fiesta Bowl meant for college football, an excerpt from "Season of Saturdays"

Drinkwitz is a former Arkansas high school coach off the Gus Malzahn tree. So it's possible option-run concepts will factor in.

Attaching nomenclature to the offense is impossible by design. There are pro-set formations, shotgun passes into air raid concepts, power runs in zone blocking but sometimes man ... hell, it's easier to have Harsin describe the constants rather than the variables.

Harsin laughs when people try to describe his system.

"Do you remember that commercial, I think it was for UPS, when the guy had all that yarn up on a big chalkboard tied to all these different spots and all these circles drawn around the different spots, and he was like, ‘This is shipping there, this is headed to that,’ and then he stands back there and says, ‘Well, the matrix isn’t perfect?’ That’s our offense. It’s the matrix. It changes.

"It’s based off of our personnel. That’s a philosophy."

Petersen and Washington will visit the blue turf to kick off 2015. It's Petersen's first time back and Harsin's first chance against his mentor. The game was booked before Petersen made the switch, and a $2 million buyout has kept it in place.

Harsin doesn't duck the subject, but doesn't push the game as a changing of the guard. He just wants to recruit with it.

"It will certainly be emotional. For us it’s Washington, it’s Coach Petersen, it’s all of that, but it’s also the first opening night game here on the blue since Oregon in '09. That’s more exciting than anything. We get to play a great team. There’s plenty of storylines.

"And you know what? We’ve got a lot of guys who are coming back that were pretty good last year, and they’re excited about getting better. What better place to start getting better than that first game?"

That passes for hype in Idaho.