"We all saw it this past season. [The committee] was pretty fair about looking at who you played," said LSU senior associate athletic director Verge Ausberry. "I think it affected Baylor. They didn’t have a Power 5 opponent."

Ausberry oversees scheduling. His conference mandated its programs play at least one non-conference power opponent each season, effective 2017. Until recently, BYU did not count as one.

Despite that, LSU will meet the Cougars in Houston to start 2017. LSU was already set to meet its requirement that year, playing the ACC's Syracuse. Why BYU too?

"We’re playing for the committee by scheduling BYU and Syracuse in the same year," Ausberry said. "No one can say we've shortchanged our schedule. You have to play somebody now, and we recognize that, because even as tough as the SEC West is, I think you still need that extra game. Or two."

Along with nine-game conference schedules in three power leagues (the Big Ten's will start in 2016) and Notre Dame’s place in the ACC schedule, the SEC’s previous declaration made relevant independence seem impossible for BYU. How can you build a quality schedule when nobody needs to play you?

The Cougars have gone 34-18 since independence, with a 9-11 record against current power teams. And while that includes top-tier non-power opponents like UCF and Boise State, it's not a power schedule. The Cougars ventured out with a school TV network and an ESPN deal, hoping to become something closer to the Fighting Irish than the Broncos. They needed major programs, most of whom weren't interested, not in the dying light of BCS logic. 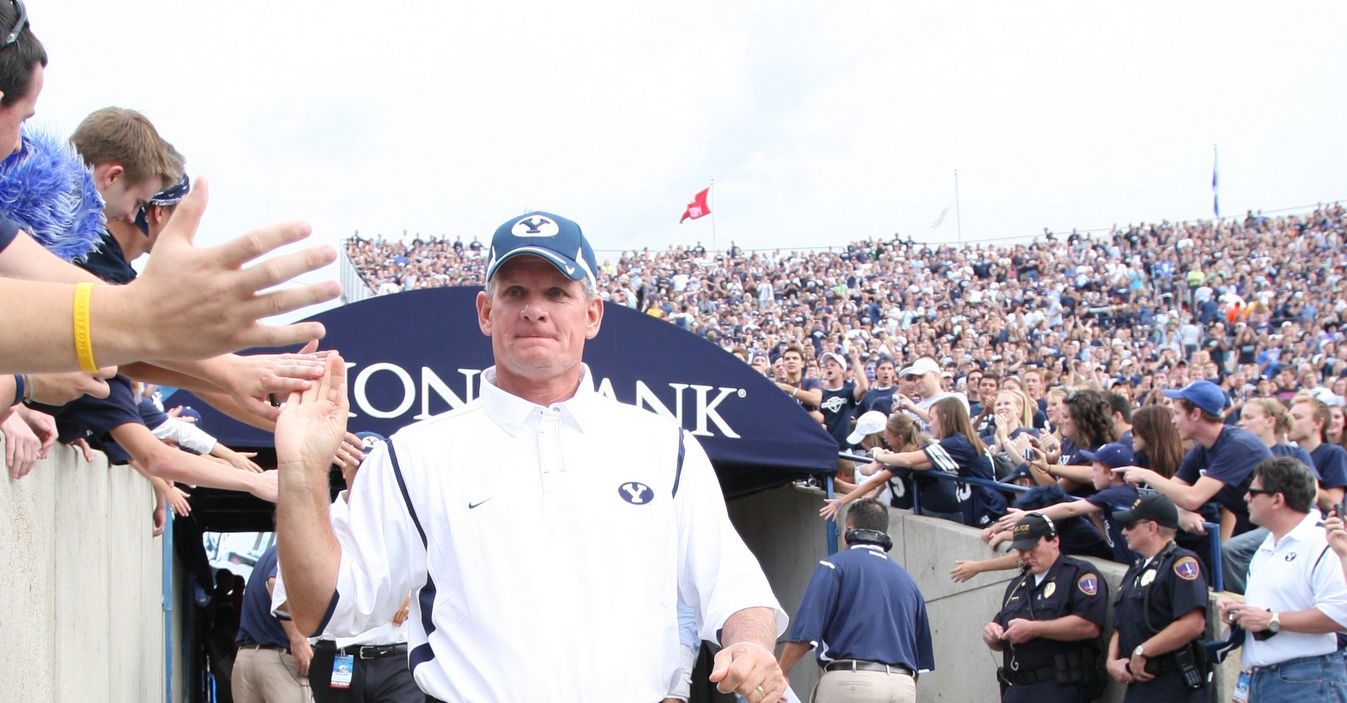 BYU is suddenly a hot pick to beef up your strength of schedule, in part because Baylor played Buffalo. Sort of. And not just because the Big 12 could invite BYU and someone else in order to add a résumé-padding 13th game for its conference champ.

When 11-1 Baylor was shut out of the inaugural bracket, athletic directors nationwide agreed the committee rewarded schools for aggressive out-of-conference schedules.

Florida State vs. Oklahoma State and Florida. Alabama vs. West Virginia. Oregon vs. Michigan State. Ohio State vs. Virginia Tech and Cincinnati. And then Baylor vs. 1-11 SMU, FCS Northwestern State and 5-6 Buffalo.

In years past, LSU might have felt comfortable locking up a schedule with Syracuse plus three cupcakes. But when ESPN contacted Ausberry about playing BYU in front of LSU’s largest out-of-state alumni base, it made sense.

"The message right now is, to get to the Playoff, you should have to play P5 teams," Ausberry said. "I know one thing: we consider BYU to be one of the top programs in the country. I’m not the one who determines if they should or shouldn’t be [power opponents]."

"to get to the Playoff, you should have to play P5 teams."

How much has the Playoff changed perception? An SEC athletic director in late November, before the bracket:

"The league's decision [not to count BYU] didn't make a lot of sense to some of us. When you consider how difficult it's becoming to find quality home-and-home series as other conferences go to a nine-game schedule, I would've thought BYU would be a great partner. As it stands, it's hard to see a team with an eight-game SEC schedule and a requirement to play one other Power 5 team also put a tough game against the Cougars on."

And that same AD in February:

"I think we'd consider it now, if we could make the dates work for getting our minimum home games in and handle the Power 5 issue. Still a very tough road game, but impressive if you win."

In Football Outsiders' F/+ ratings, the Cougars have finished in the country's top 50 nine of the last 10 seasons and top 30 in five of the last nine, consistently above plenty of power programs.

"If the committee is grading each of your non-conference opponents, you need those games against BYU and schools like ECU, Houston, and Tulsa," Ausberry said.

Multiple BYU officials declined requests to comment. During a press conference this week, BYU athletics director Tom Holmoe predicted another round of power-conference expansion that would include the Cougars.

"We’re an independent team playing an independent schedule," Holmoe said. "That’s what we’ve got, and that’s where we are. We’re not really looking back; we’re looking forward because there are possibilities, and I have to do my due diligence."

Need to sell tickets? Consult the near-5,000 BYU fans who caravanned to Murfreesboro to watch a 4-4 team play a 5-3 one.

The Cougars have gone nationwide to market to LDS members. If SEC programs won't have them, they'll visit the neighbors.

"Of all the road games in 2014, the Middle Tennessee State game sticks out," said Greg Wrubell, the radio voice of the Cougars. "It was a very tough time for BYU, coming off of four consecutive losses and the injury to [quarterback] Taysom Hill. We arrived in the area not knowing what to expect, and sure enough, there's thousands of our fans to greet us.

"That's very much how BYU is going to embrace independence. The Big 12 would be great, certainly, but in the meantime, we're going to have a great time going around the country and seeing the turnout from fans."

In a muddy field across from the MTSU livestock building, BYU fans set up tents, a catered barbecue lunch, a live band and all the trappings of a major tailgate, with the exception of copious alcohol. Even though the alumni population in Nashville is modest (the chapter reports 500 on its mailing list), others drove from out of state.

"They hadn’t been over here much in the Southeast. We did some research that it would be a good fit and sold the Nashville area as a great road trip," said MTSU athletic director Chris Massaro. "[With them] being a little bit like Notre Dame, we expect to draw church-affiliated fans who had maybe never seen campus."

"We scheduled the series before the SEC policy went in place, so it wasn’t a point of discussion, but I avoid power labels. A team in a power conference doesn’t make them a power school. We enjoyed having a nationally recognized opponent coming to our stadium, and only the second national championship-winning program, after Georgia Tech visited," Massaro said.

The further from Provo, often the better for a national fan base.

BYU's religious affiliation builds any game weekend into an event. Several hundred spent their Halloween in a creaky auditorium at Central Magnet School for a BYU fireside. Before every road game, coaches, local LDS leaders, and players mingle with fans in an event that's part church service, part meet-and-greet.

Speaker Logan Taele, an LDS defensive end from Ohio, used the roller coasters at Cedar Point as an object lesson on dealing with change. Jordan Leslie, a graduate transfer receiver out of UTEP and a non-Mormon, spoke on how "God is with all of us."

The event closed with head coach Bronco Mendenhall at ease and even emotional, notable for a coach who doesn't have a reputation for being media friendly.

"I want to win," Mendenhall said, "bad. But I also love to feel the spirit, and I'll remember that longer than I did winning two Mountain West Conference championships. Seeing Jordan Leslie speak here, and have such a great experience? I'll remember that the rest of my life."

"Life isn't just about football. I love getting a chance to represent something more," Taele said while being thronged by children for autographs.

Taele said most of the team attends even if they aren't LDS, "unless they have a paper or something to write." 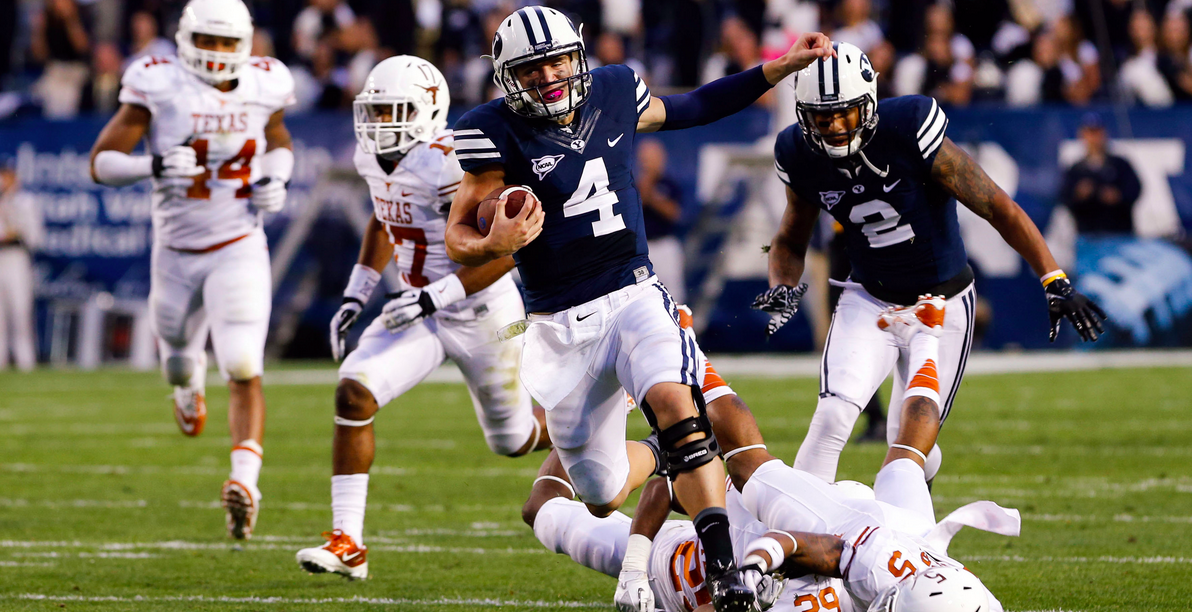 About that time, BYU finalized a small coup: scheduling SEC member Missouri in 2015 and 2020.

"Based on our move from the Big 12 to the SEC, we experienced a scheduling void on November 14 for 2015 as we worked with the SEC," Missouri athletic director Mike Alden wrote. "BYU was the only opponent that could accommodate this date. Although we realize they are not classified as a P5, we recognize them as a formidable opponent having a strong national brand."

By 2020, the Cougars could attain power status anyway. For now, BYU's 2015 slate is its most respectable yet. Eight opponents finished 2014 in the top 60 of F/+, and four -- Nebraska, UCLA, Boise State, and the Tigers, fresh from their second SEC East title -- finished in the top 30.

"Based on what we've seen from this year's selection committee, I think -- but I don't know, I think -- that if [BYU] goes undefeated, that schedule puts you in the conversation for the Playoff, but not in. Chances are if BYU ran the table in 2015, they'd be the Group of 5 rep and nothing more," an SEC AD said.

"The potential is certainly there to stand out, but there's no magic number in 2015 or beyond for this program," BYU announcer Wrubell said. "If there is a change, it won't be because a number of wins. If BYU makes a Power 5 conference, it's by displaying their competitiveness and ability to draw fans nationwide. It's not about BYU changing."

"BYU's got the best of the situation right now."

Nine Pac-12 schools have scheduled BYU in the next decade. An agreement for a series with Notre Dame is still hanging around. Five power schools are already on board for 2018.

And if the Cougars decide conference affiliation is an immediate must, there's the American Athletic Conference.

"[They're] clearly a power team in our estimation and one of the great college programs. We're proud that several of our teams will be playing against BYU in the next several years," AAC commissioner Mike Aresco said last summer.

"They'd boost the conference, certainly. But it's unlikely they would, with Big 12 rumors, plus they've got the best of the situation right now," one head coach in the AAC said.