College football relegation! Here's how conferences would change after 2014 by Bill Connelly @SBN_BillC

What relegation would allow is the possibility that underperforming teams not living up to the aristocratic standard would be booted into the mob to prove their worth anew, and perhaps lose their seats permanently to hungrier underlings. If screwing someone out of a spot in the penthouse isn't the American dream, we don't know what is.

Three years ago, following a delicious end to the English Premier League season, we crafted a series promoting the glories of relegation and why it would work perfectly in college football. That is, it would create beautiful messes and solve problems while creating others, but that's how we tend to judge beauty in this gorgeously ugly sport.

It would also bring merit to the table.

College football's heavyweights, distributed through five conferences, are in the process of separating themselves from the rest of the sport. They want as big a slice of the pie as possible, and they want to do things for players (full-cost-of-attendance scholarships) and for themselves (waterfalls in facilities that never needed waterfalls) other schools can't afford.

These conferences are littered with dead weight. All five power conferences -- the ACC, Big 12, Big Ten, Pac-12, and SEC -- have programs that are there because they chose the right friends 80 years ago, are located near large population bases, or were good right when a major conference was looking for one more team.

Meanwhile, well-run small programs languish because their timing was bad or they don't bring a big enough TV market.

In the last nine seasons, since Dan Hawkins left Boise State for Colorado, BSU has gone 13-6 against current power-conference teams and finished in the AP's top 11 five times. CU has gone 18-69 against power teams and attended one minor bowl. But which belongs to a power conference?

In England, the bottom three teams in the Premier League standings get demoted to the second-level Championship League every year, while three Championship teams -- the top two finishers and the winner of a playoff between the next four teams -- take their place for the next season.

The same thing happens with teams flipping between Championship and third-tier League 1. And between League 1 and fourth-tier League 2. It is a siphoning of weaker clubs and an acknowledgement that everybody, from global brand Chelsea to a team in the 24th tier, is part of the same entity. They make drastically different amounts of money, and there is a ruling class, but Football League members are Football League members.

How it would look

Each power conference would work similarly to a country within the European system. (I'll let you determine which is which, but the Big Ten is definitely England. The SEC is ... Italy? Germany? The Big 12 is Portugal.) That means each of the five has its own set of affiliated smaller conferences. Let's walk through each tier, from the power conferences to the bottom of Division II.

Geographically, these leagues work out. If we base each tier on merit, then there are awkward relationships later -- there's no Western team in Tier IV -- but it works here. And since there are 10 FBS conferences, that fills the top two tiers.

2014 promotion battles, if we give the higher tiers home advantage: Memphis at Wake Forest, Marshall at Iowa State, Northern Illinois at Purdue, Boise State at Colorado, and Georgia Southern at Vanderbilt. Four or five road teams would probably win spots in Tier I.

Since this is based on merit, to determine the tiers for FCS and Division II, I'm using a scoring system based on 10 years of playoff results. If a team currently in your conference made the first round, you get one point. Second round = two. Et cetera. With five-round structures for FCS and Division II, that means the winner gets six points, the runner-up gets five, and so on.

For FCS, you have Appalachian State earning 38 points, North Dakota State getting 27, New Hampshire 24, etc. By current conferences, you get this:

The next five conferences are the Southern, Patriot, MEAC, Big South, and Northeast. Almost every member of those conferences is in the Eastern time zone. We'll make a slight change: bump the Pioneer over the Northeast and give the Pioneer to the Pac-12, since it at least has San Diego and some Central teams.

That's Fordham at Elon, Morgan State at Nicholls State, Liberty at South Dakota, Jacksonville at UC Davis, Chattanooga at Murray State for the right to play in Tier III next season. According to last year's Sagarin rankings, all five road teams were better, and only Morgan State-Nicholls State and Jacksonville-UC Davis are close.

And now to mix Division II conferences with those last two FCS conferences.

(If the Ivy League participated, it would be in Tier V. For simplicity, we'll say the league abstains. Harvard moving to the Patriot League is too strange to think about. We'll include the SWAC, which also abstains from FCS tournament participation. That adds an awkward SWAC-to-Northern Sun connection, but we'll live with it.)

We fill in the final tier by cramming seven conferences into five spots. The promotion candidate in the two-conference regions could be determined by rankings or a head-to-head.

Relegation scratches so many itches. I love this sport's silliness, its school-to-school traditions, the 50 million approaches you can take to winning. But the salaries, obnoxious facilities, and [insert any quote from Texas athletic director Steve Patterson] have soured me. So welcome to my fantasy world.

This isn't a world without drawbacks. The thought of sending players to play for another school violates every concept of "student-athlete." Beyond that, there could be negative consequences to the game itself.

So much of what we love about college football was derived from a lack of fear when it comes to losing. Kentucky happily hired human air raid siren Hal Mumme in the 1990s, in part because the Wildcats were already finishing at or near the bottom of the SEC standings. There was no harm in trying an experimental offensive style when the downside was basically maintaining status quo. But if the Wildcats had to worry about getting dropped to the Sun Belt, they might have elected to play it safe with an endless selection of Bill Currys, hoping simply to finish eighth and stay in the SEC. [...]

"What happens is that the lower 13 then hire coaches that aren't quite as potentially good, staff that aren't quite as innovative, chairmen who are more risk-averse. And the whole thing kind of conspires to become, not an anti-'Moneyball,' but very conventional ball, [said 'The Numbers Game' co-author Chris Anderson]."

The Eastern Washingtons would still have every incentive to get funky on offense. But if the financial split between the top tier and everybody else gets too large, staying in the middle of Tier 1 becomes a bigger goal than risking to win big. You could end up with more 2014 Iowas and fewer 1997 Kentuckys.

Still, college football is too unwieldy to become homogenous. We'll still have fun.

How to convince the power schools

You would need to figure out things like scholarship differences in order to even make it worth voting on. You would then need power programs to vote against their short-term self-interest, which never happens in any vote on anything.

So you'd need a legitimate college commissioner. How would that person make the case to the power conferences?

Schools in the bottoms of power conferences would never agree to risk their money flow.

But you could create a less risky environment. Maybe you promise original power-conference members a minimum percentage of the big-money pot even if they fall. Even if a Purdue is languishing in Tier II or Tier III, it is still making enough money that it wouldn't have to cut other sports.

This is unfair to programs starting below the top tier, but ... well ... the current system is unfair.

And these games would make money. If you watch April Premier League matches between the 16th-place team and the 19th-place team, you see intensity like games with title stakes.

You would have to create flexible non-conference scheduling. If Indiana or Purdue gets sent down to the MAC, Indiana and Purdue have to keep playing. Same in the lower tiers: Lehigh and Lafayette, Montana and Montana State.

Perhaps you only schedule two non-conference games per year ahead of time, leaving one or two open slots until a scheduling frenzy in January. Maybe you mandate eight-game conference schedules for all leagues so that everybody has four slots available.

You could create a separate structure for basketball, giving programs like the Jayhawks a chance to make up revenue on schools like Clemson or, this year, Missouri.

In some European leagues, teams have the option of using junior teams in lower leagues. VfB Stuttgart II and Mainz II play in the third level of German soccer. Bayern München II and Nürnberg II play in the fourth.

Instead of having your young hotshots on the practice squad or trying to loan them out, you get development time in your system, with coaches you employ, against teams like Memmingen and TSV Buchbach, the lower-FCS teams of the German professional system. It offers a quality opponent for Memmingen, but it also delivers a clear value for the top teams.

This could work in a couple of different ways in college football. 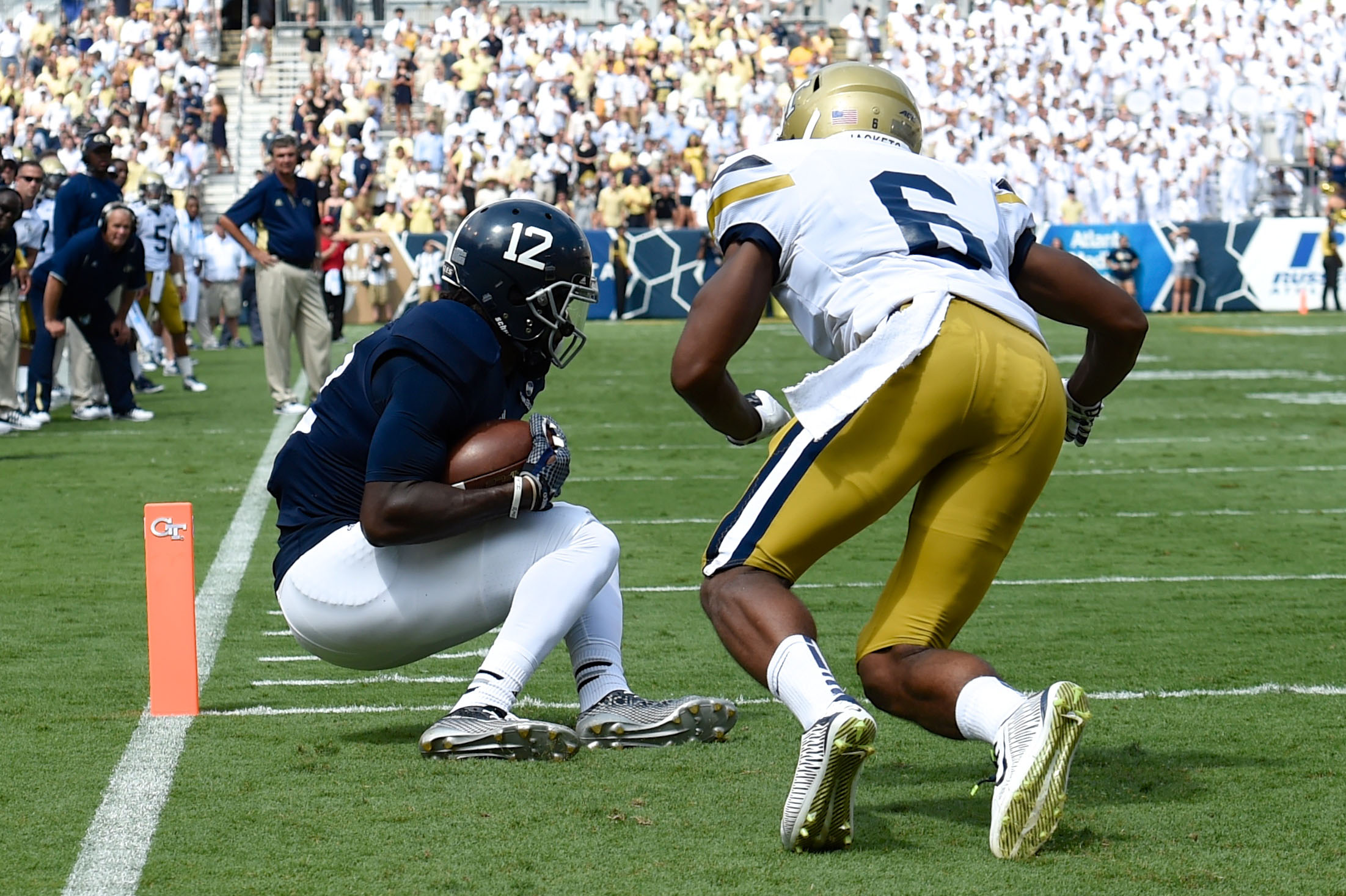 Each year, you find more "What if college football had relegation ..." pieces on the Internet. Just remember SB Nation did it first-ish, and we definitely do it best.

We update a years-long simulation, based in part on the Sagarin ratings, which rate FBS and FCS teams together. And in what is now a 10-season simulation, we get a crystal-clear idea of how this would work.

This alignment of the tiers is different than above, and real-life conference realignment occurred in the middle of this. It's a mess. It's beautiful.

After 10 years, the ACC might have the highest floor. Either Virginia or a damn decent UCF would have gone down, and since UVA ranked higher in F/+, we'll send the Knights to the Big East. Or AAC. Whatever.

UConn nudges Maine by five spots in the Sagarin ratings. Steve Addazio gets BC back to the top.

That Iowa State was up and WVU was in Conference USA was a timing issue. The Cyclones were lucky ... until 2014.

WVU's sojourn into the bowels of Tier II coincides with the emergence of the best Marshall in a while. I guess we just delete UAB, huh? :(

We stuck Maryland and Rutgers in the second tier, making them earn their way into the top. They've yet to do so. But with the demotion of BGSU in favor of Minnesota, you've got nine of 12 original members back in the B1G.

Illinois, Indiana, and Purdue have barely done anything worthy of Tier 1 in a while, and the lasting additions of NDSU, Toledo, and NIU make the Big Ten look better.

The Pac-12 is just vicious. Nevada and Oregon State were the weak links, and Nevada just got traded for one of the best defenses in the country, Utah State.

Because of realignment sending WAC teams in any number of directions and the Pac-10 turning into the Pac-12, the Mountain West only has six teams. At some point, there should be some sort of mass promotion from the WAC to the MWC and so on.

More often than not, the Sun Belt winner goes up to Tier 1, then goes right back down. Appalachian State stayed up for a while a few years back, but it's still big that UL-Lafayette stays up for a second year, even though it's because Vandy, now on its second Sun Belt trip, fell apart.

Georgia Southern, SEC team. The world is kind and just.