Here they come, zooming to meet our thunder
At 'em boys, give 'er the gun!
(Give 'er the gun now!)
Down we dive, spouting our flame from under,
Off with one helluva roar!
We live in fame or go down in flame. Hey!
Nothing'll stop the U.S. Air Force!

Plunge 'er through and do it twice!

Wear your blue and wear your white,

Wear them both! Maybe have pride!

Our gals are fair and kind of nice!

Get pretty drunk before we fight!

Yea, Alabama! Drown 'em, Tide!
Every Bama man's behind you
Hit your stride
Go teach the Bulldogs to behave
Send the Yellow Jackets to a watery grave

Bama's whole fight song is Nick Saban's MAKE HIS ASS QUIT speech set to nautical circus fanfare. Its already-blunt poetry is usually clarified by a postgame "WE. JUST. BEAT. THE HELL OUTTA YOU."

Oh, the day of days is here
And the Bobcat will appear
Yes, the claws will fly and the Bears will die
On this day of victory!

Oh, the Bobcat dotes on fighting
And his courage is supreme
And when it comes to smiting
Bears and Mules are all the same

"The day of days" is often used to refer to things like the Allied invasion of Normandy during World War II, the Biblical apocalypse, and a sports rivalry among some Division III colleges in Maine.

This is not Bates' fight song proper, but it is a school song about a fight-doting so severe that not even bears and mules can be distinguished. These animals are easy to tell apart, unless you're in a Bates Bobcat berserker rage.

You've got to scalp 'em, Seminoles!

We'll drop our battle axe on Georgia's head
When we meet her, our team will surely beat her
Down on old Georgia's farm, there'll be no sound
Till our bow wows rip through the air
When the battle is over, Georgia's team will be found
With the Yellow Jackets swarming around

This is not from Georgia Tech's fight song proper, which is the most LIT of all fight songs ("Like all the jolly good fellows, I drink my whiskey clear" ... "Oh, I wish I had a barrel of rum and sugar three thousand pounds"), but from the post-extra point song. If you don't want to include it, you might end up beheaded and buried in bugs.

There will be nothing left of you, left of you
For we must make just a few more touchdowns yet
Shout, rah, rah, tiger, Lafayette

This is from an item titled "Lafayette Fight Song 1898" not in current use. I think it should be.

Lafayette's archrival Lehigh will be blotted from existence, Lafayette will score more points after that, and then a monument to the obliterated will be made just so it can be desecrated by Lafayette. And you kids think Urban Meyer runs up the score.

Up with Montana, boys, down with the foe
Good old Grizzlies triumph today
And the squeal of the pig will float on the air
from the tummy of the Grizzly Bear

New at Ted's Montana Grill, the meal that provides dinner conversation even while you digest it!

(This has the same music as the Georgia Tech song above, plus some others. Yes, there is a contentious history.)

So, Demons forever stand and
Fight for dear old Demonland

We fight fast and furious, our team is injurious
Tonight Carleton College will sure meet its fate

No, Bountygate's Gregg Williams did not attend St. Olaf.

Once two strangers climbed old Rocky Top
Lookin' for a moonshine still
Strangers ain't come down from Rocky Top,
Reckon they never will

Sure is a shame what happened to those federal agents. Sure is. Not that I know anything about it.

Now prepare for the most Tennessee moment of your life:

Second, this is "Varsity": 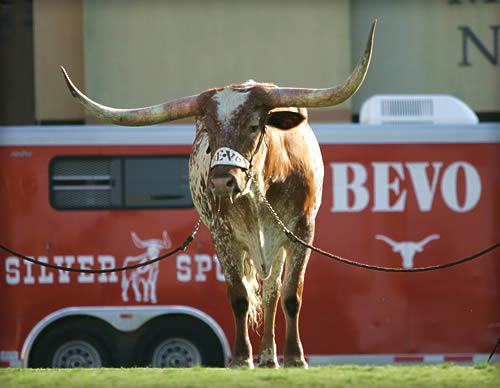 So never stop
'Til the last gun is fired
And the score is told
Sock their kabinas, you Javelinas
Blue and Gold

Go you Javelinas
Fight for AMK! [repeat]
Bust their old machines
Right between the eyes

This is the plot of the Terminator movies, but with more pig-like animals. I have asked Texas A&M-Kingsville what "sock their kabinas" means and will report back to you soon.

This comes from UC Davis' version of the fight song Cal and UCLA fight over.

Dynamite, dynamite,
when Vandy starts to fight
Down the field with blood to yield,
if need be, save the shield

Gallons of the stuff! The SEC's real crimson tide! We'll float to Shreveport, boys, then blow shit up! BLOOD AND EXPLOSIONS

The rest of it is less self-assured.

And you ought to hear the meter to the roar of his repeater
How they run (yes, run!) when they hear him come

Some versions make the GUNS element clearer. Either way, this is a repeater:

Kevin TrahanWho's got the most sidewalk alumni, per Facebook?
Page 35
Bud Elliott and Pete VolkBama's streak of No. 1 recruiting classes at risk