Here are 13 new college football uniforms for 2015. Are they lit or not? by Zito Madu @_Zeets 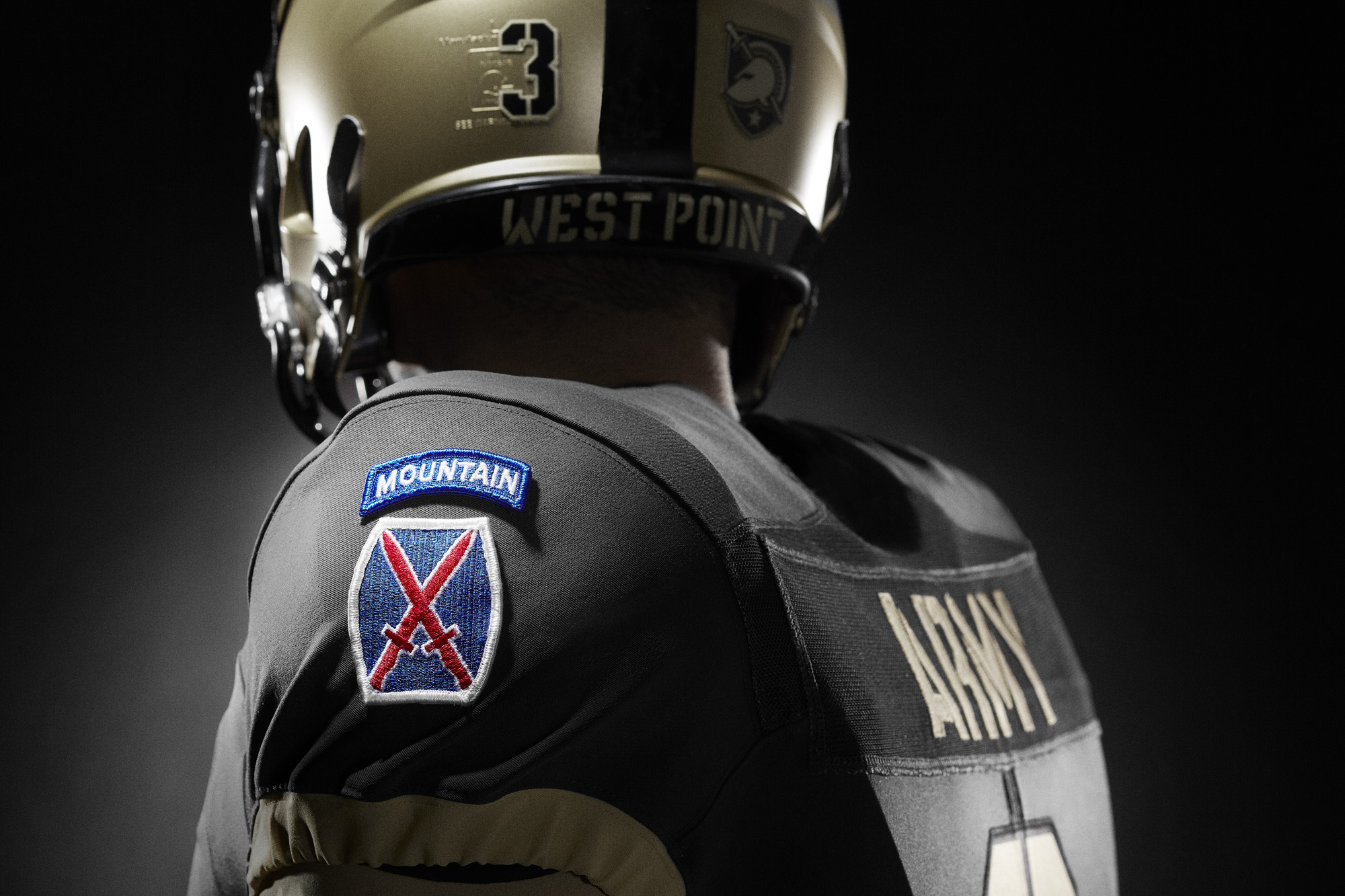 Look, I'm not going to be the one to say anything negative about these uniforms. They're honoring soldier-scholars who are also athletes. That's a deadly triple threat.

The new logo is Athena's helmet with a sword sticking through it. So I'm only going to assume they're insinuating they can murder a Greek goddess, which I guess you have to believe since they're soldier-scholar-athletes. They look cool as hell, too.

The all-black looks like battle armor for an evil Captain America. It's extremely lit. 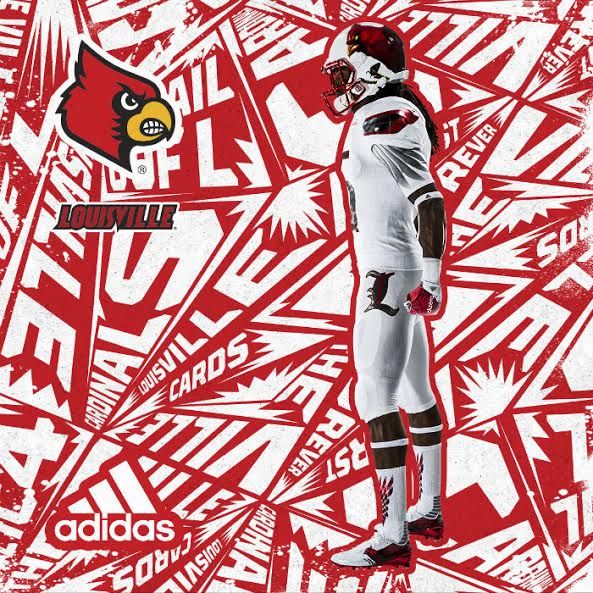 This is so bad, so damn bad. Not lit at all. It's pretty dim. It's "you've been voted off the island" dim. 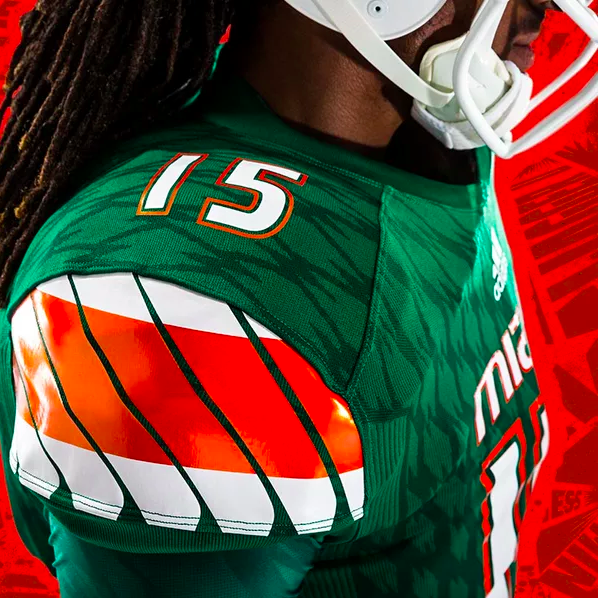 They were unveiled at nightclub Liv while Pusha T performed. I didn't even know what they looked like, and I already knew that it's lit. They even had Yeezys there. I might buy one out of moral obligation at this point. 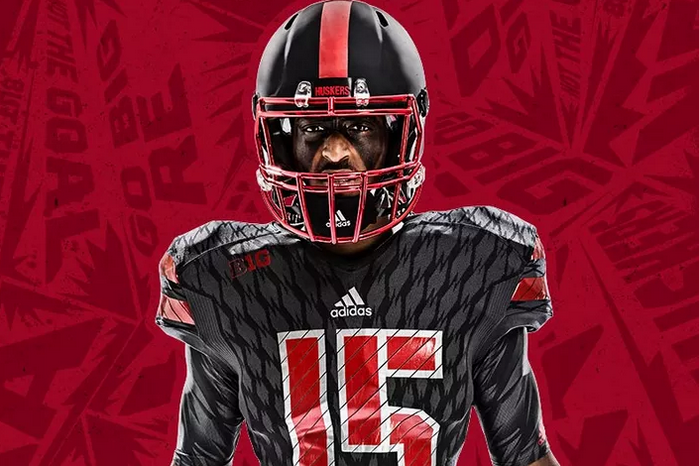 Sigh. It's just ... *pinches bridge of nose with index finger and thumb* ... I just feel like ... at least it's not as bad as last year's, right? Progress needs to be praised but I mean, like ... you know, maybe it's my fault for expecting better.

The uniform looks like a regular uniform that fell asleep under a tree and the shadow of the falling leaves took it over like the symbiote with Spider-Man. I don't want to talk about it anymore. 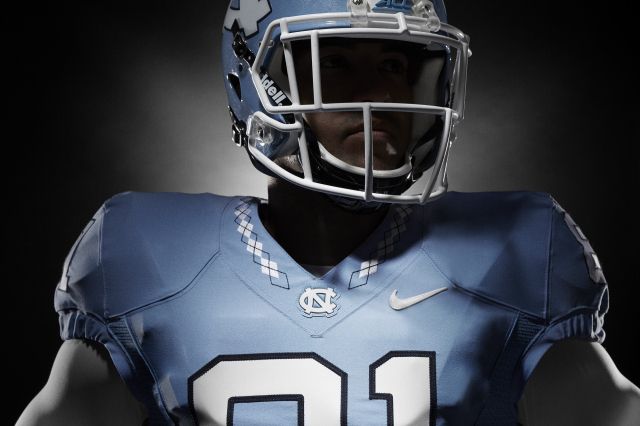 Can you ever look bad in Carolina blue? Getting pummeled by a Tar Heels linebacker is like being suffocated by a pleasant summer afternoon.

It's a lovely color, and now it comes with argyle, which looks like pixie dust. Sure, it looks weird and unnecessary on the side of the pants for the black uniforms in the same way that the blue numbers do. It sticks out sorely.

But the other than that, can't complain too much. It looks like a classic already. Wouldn't say that it's lit, but it is cool.

I love the gold for the studs of the cleats, but let's all be honest with ourselves here. Green isn't really a color that you want to base a uniform on.

Sure, it's a cool color. It's a calming hue. It represents nature and everything healthy for you to eat. But it's not something you want to look at by itself. It just seems too much? Unless you're the Incredible Hulk, but even he would agree that this is a lot of green. It's bad for the eyes. Maybe add some purple pants next time. It worked for him.

Heritage is lit, but I've thrown away too many plates of broccoli to start liking green now.

Who else but the Carrie Bradshaw of college football would tease glow-in-the-dark uniforms?

Oregon is like a bored Tony Stark at this point. Just a bunch of money and technology lying around. They're at the point of "but what if ... it glowed?" and no one can stop them.

And you know what? It's pretty fun. The feathers on the chest, the gloves and even the helmets would glow. Just play the entire game in the dark and turn on the light when someone stumbles into the end zone. It's lit. Pun intended. 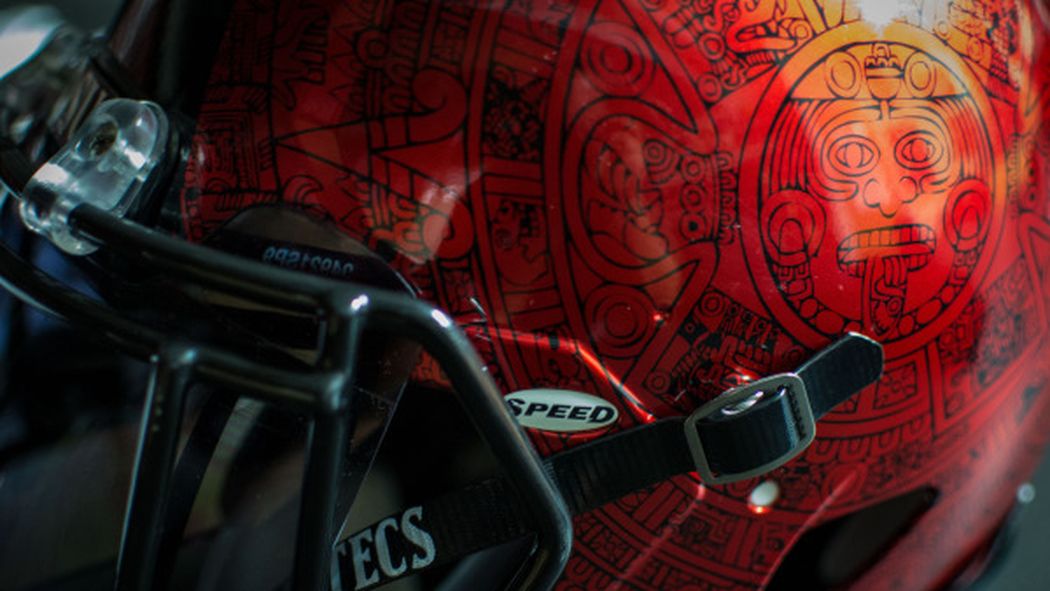 New World helmets! These look soooooooo good. They managed to even make orange an acceptable color and not the reprehensible hue that it was born to be. This is all the flame emojis. 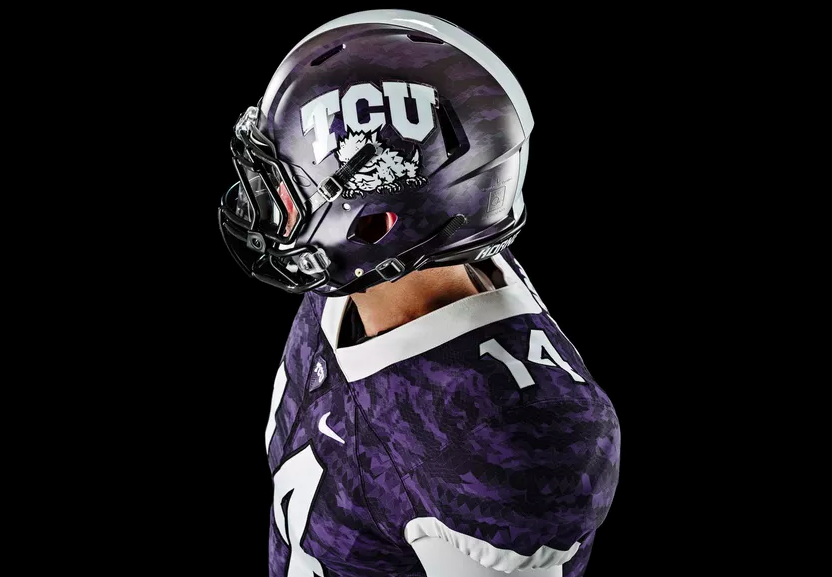 Wow, these are awful. They look as if someone used bleach instead of regular detergent for their colors.

They're apparently supposed to be scaled like a lizard, which I'm sure sounded really cool in development. But here it looks like beauty supply store camo.

It's intensely and aggressively attacking my eyesight. Not lit at all. It's rude-waiter-on-a-first-date dim. It's all types of several-overdraft-fees-after-a-night-out-with-the-boys-that-you-become-aware-of-in-the-morning-while-fighting-a-hangover dim. 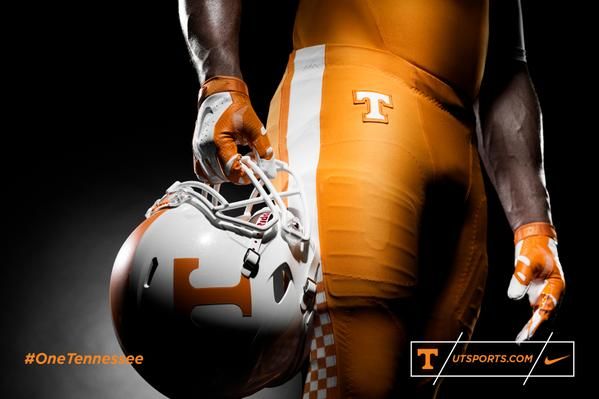 That's mustard-colored, right? It's a naturally ugly and sick color, but you can't beat the simple route Nike took. No need for anything extravagant. Just a sleek uniform that you wear to sports. And checkers, because you can't really go wrong with checkers. It's bonfire-with-old-friends-and-cheap-wine lit. I like it. 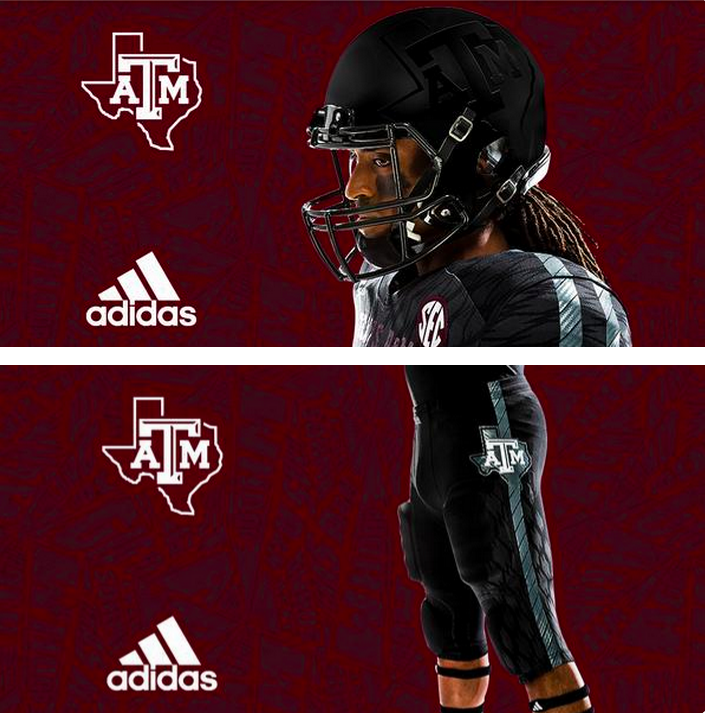 These look a lot like the Nebraska ones. I had to check several times to make sure that they weren't. Big difference is that these are Halloween uniforms. In that case, I'm assuming that they're meant to just scare fans for that one night only, because they're just as bad as Nebraska's.

The saving grace is that the helmet is so damn cool. You want to remove it away from the disappointment that is everything else. Like the helmet is Lisa Simpson in a family of guys who growl at their dog.

Just no more slashes on the uniforms. It's making everyone uncomfortable. The fact that they managed to ruin a black uniform means that they went the extra mile to make sure that it wasn't lit at all. 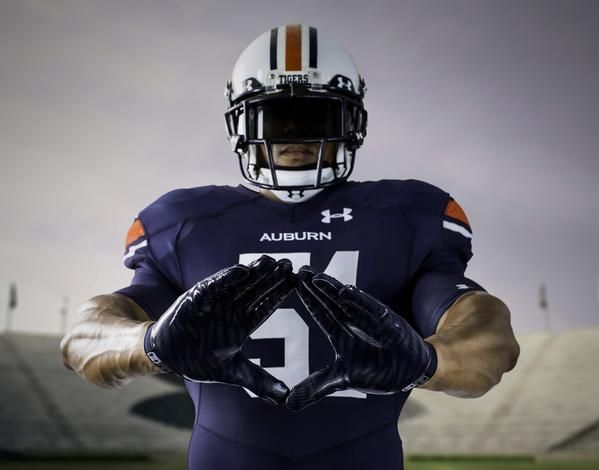 Calling these uniforms "ungrabbable" is a tall claim. This sounds like every lie TV has ever told me. "Wrangler pants are cool." "Uggs are cool." That life is a series of unending disappointments and false dawns.

It just seems impossible to make them ungrabbable. Is that even within the rules? What is amour grid technology, and why is it being spelled "armour" and not the U.S.-accepted "armor?" I don't trust anything about this. It's not lit, for patriotic and existential reasons.

UNLV's going all in on VEGAS BABY, and it's pretty awesome http://t.co/R1ydrtTpjD pic.twitter.com/GKd1szrDp4

I would talk about these, but Las Vegas has a tougher non-disclosure agreement than Fight Club. All I will say is that having Rebels on the shoulders and helmet is awesome. And that it's somewhere between Fear and Loathing in Las Vegas lit and Ocean's Eleven lit. Honestly though, the helmet and the sign are nice and clean.

SB Nation presents: Recruits reveal their favorite and the most overused emojis