The NCAA's football rules committee proposed a change that could diminish the pop pass, the newer breed of option plays that include play action. There will be no new rule; officials plan to enforce the existing rule more strictly.

Still, this offseason's minor controversy shows we're all still learning about the concept. It's become more and more popular in college football, even making appearances in the NFL.

The current rule allows offensive linemen to advance three yards beyond the line of scrimmage on passing plays. The proposed change would limit that to one yard, like the pros.

Combining run-blocking schemes with forward passes is not a strategy teams are going to give up. It's a continuation of play-action and option football, married into a single concept. Evolving the sport to feature exciting playmaking and faster tempo is good for the game, especially when it comes to appealing to millennials.

The suspicion amongst offensive coaches seems to be that the defensive guys are appealing to the rules committee to deliver them from a concept they've struggled to stop. Much like when Bret Bielema and Nick Saban appealed to stop up-tempo offenses in the name of player safety, this rule is said to be in the interest of making the illegal man downfield rule easier to enforce.

While some teams got away with blocking more than three yards downfield, one would think adding an eighth official and emphasizing the existing rule would be enough. Instead, it's hard to come away with any impression other than that defensive factions aim to end pop plays such as this one:

Baylor's linemen are aggressively blocking, although they only reach 2 yards past the line of scrimmage when the ball is thrown. That forces the defense to commit to stopping both the run and the pass and makes tactics like gang tackling and team pursuit more difficult. It's hard to outnumber the run and create numbers advantages if the offense is isolating your players by attacking their assignments.

However, not all pop plays would fall victim to this change, including some of the nastier varieties.

The change would not have rescued West Virginia from this vertical pass play paired with a zone run to Samaje Perine, who had over 200 rushing yards in that game.

It'll take some discernment to see which pop schemes can survive and which teams will be hurt by the changes.

That's not going to work anymore

Since the play-option pass is all about combining a run-blocking scheme and pass patterns, the combinations that would no longer work are those that result in the OL getting too far downfield. Common plays in which this occurs are:

Notice anything? These are the downhill, smashmouth varieties that are more common to pro-style, man-ball systems. Incidentally, these are the types of schemes that defensive-minded head coaches prefer to build their offenses around.

If this change is being pushed by the pro-style stalwarts of the college game, it's one of the more short-sighted tactics we've seen in recent years. As it was said of Napoleon after he murdered a well-connected French duke and united European aristocracy against him, "it was worse than a crime, it was a blunder."

What if the types of pop plays that defensive head coaches want outlawed are specifically the ones most likely to be utilized by their own offenses? Perhaps some of these coaches should spend more time considering what the pop can offer their teams.

Other plays that would fall victim are ones in which the decision for the QB is drawn out as long as possible. These include Auburn's famous touchdown in the 2013 Iron Bowl as well as some of Kansas State's concepts, in which the QB approaches the line and reads blocks and coverage before throwing.

This play was illegal at the time and is an example of the kind of "power run/release valve route" play that would not work within the new constraints. The receiver, Glenn Gronkowski, starts as a fullback and leads through the hole before cutting upfield as a receiving target. The time it takes to execute that route is going to make it hard for OL on most running schemes to avoid getting downfield, especially since it's a power run here.

Routes that involve comebacks or slower-developing breaks on the part of receivers are also going to see their roles in pop schemes diminished by these rules. Pop teams will need to emphasize quick routes that open before linemen get downfield.

Some teams such as Ole Miss or Baylor already have their OL work with an internal clock to avoid releasing too far upfield. For the Rebels, who use some lateral footwork anyway, it's not difficult to avoid releasing downfield even in schemes like inside zone or power.

Otherwise, there are still running schemes that won't encourage linemen to go too far. Some examples:

The backside skinny post in particular would still be useful. 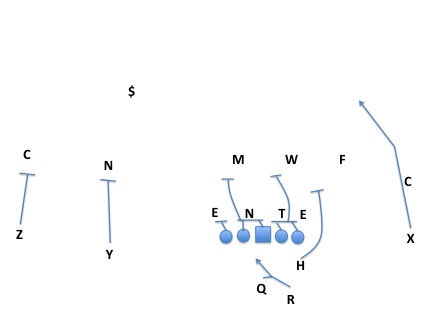 Some plays would need to be altered so that they are predetermined calls rather than post-snap reads. Here, for instance, the X receiver and QB can decide before the snap to use the skinny post if they see the F safety cheating up to outnumber the run.

All of this is going to put a premium on experience at QB for teams that want to keep executing these concepts. Timing, reads, and footwork will become critical to avoid flags and turnovers.

Don't expect these types of offensive innovations to simply fade away. With tweaks, they'll continue to be employed by certain teams. But some of the anti-pop forces might find they've hamstrung their own offenses.