I had 2nd thoughts about choosing Clemson over my home-state team. 1 play changed everything by Clemson CB Adrian Baker

Growing up in South Florida, I always watched Florida State football very closely. I am very familiar with their tradition, history and plethora of legends. I modeled myself after players such as Deion Sanders and Antonio Cromartie.

So, it was a forgone conclusion that I would play for Florida State. In July of my junior year at Chaminade-Madonna Prep, I committed to further my education and athletics at Florida State University. That moment in my life was a dream come true, but some dreams never become a reality.

We tend to make emotional decisions in vital parts of our lives. With age comes maturity. In December of my senior year, I made the life-altering decision to sign with Clemson University in 2013. It was a very emotional decision that required lots of thought, the analyzation of pros and cons and where I would fit in at each university from a football standpoint.

I received plenty of heat for my decision to enroll at Clemson. One of my high school coaches thought I was making a mistake. I remember him sitting me down in his office and telling me, "Bake, if it’s not gonna be FSU, please go to Oklahoma."

At the time, Florida State was considered the cream of the crop of the ACC. The Seminoles had a 15-6 record against Clemson since joining the ACC and were the reigning conference champions.

My freshman year, Jameis Winston's Florida State would annihilate Clemson in Death Valley on the way to an FSU national title. My sophomore season, we lost in heart-breaking fashion at Doak Campbell Stadium in overtime, and the Seminoles went on to make the Playoff. I was also considering a transfer after redshirting one year and not playing very much in the next.

Naturally, I began to wonder if I’d made the right decision.

The 2015 season was in full swing, and we were fighting for a chance to play in the College Football Playoff. We had already defeated the likes of Louisville, Miami and Notre Dame.

But the ultimate test still remained: FSU. As a program, this series had restricted us from garnering national respect and being labeled as an elite. On Nov. 7 at 3:30 p.m. local, we would have our opportunity to dethrone Florida State.

Florida State jumped out to an early 7-0 lead. They scored so effortlessly, in only 45 seconds after a 75-yard run by Dalvin Cook, that it gave me déjà vu back to the 2013 beatdown.

Our offense was not able to score, and the defense was back on the field quickly. They moved the ball at lightning speed again, from their 23 to our 20 in under three minutes. We’d begun to unravel. Death Valley was as silent as the dead of night.

It was third down. Florida State was on the verge of taking a commanding 14-0 lead. The sun was smiling over the circumference of the stadium, making each player drip with sweat. 85,000 fans stood on their feet.

I glanced at Coach Venables to get the defensive call; he signaled cover 3. In cover 3, I am responsible for covering a third of the field. The free safety has the middle third, and the other corner is responsible for the other third.

I looked across the line at the wide receiver wearing No. 15 and lined up slightly on his outside shoulder. Their quarterback commanded that a receiver come in motion, bringing him from the other side of the field to where I was positioned. I recognized this pre-snap formation from hours of film study. 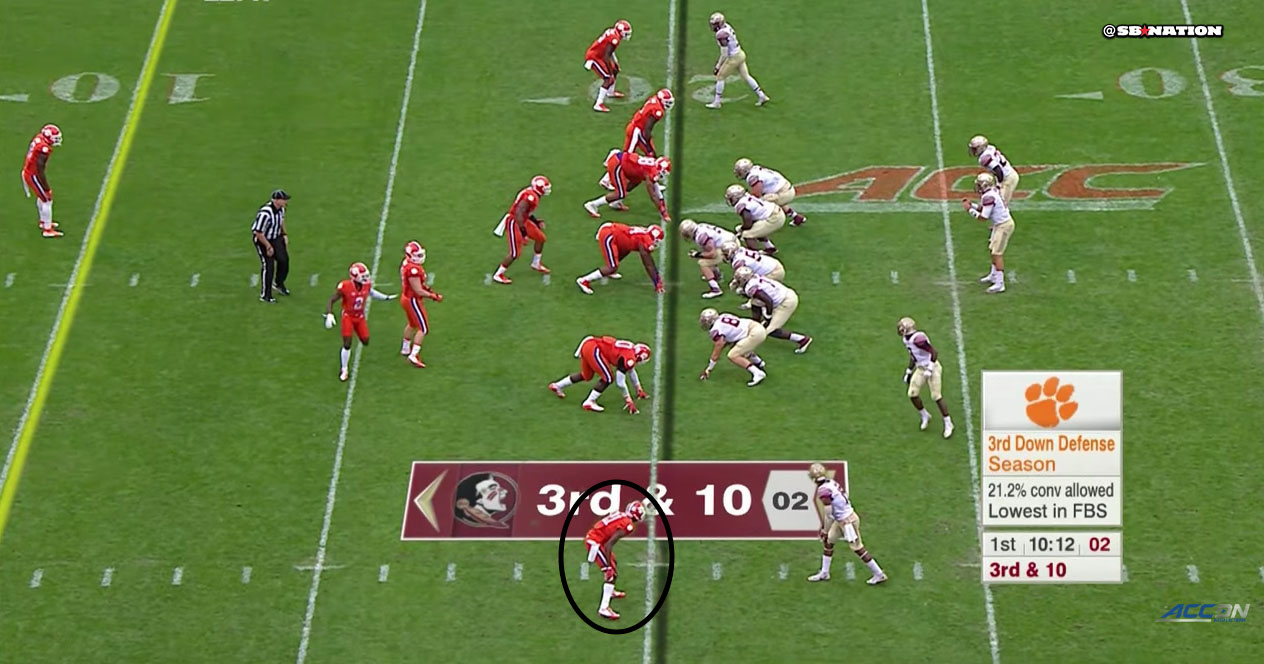 Once the ball was snapped, both receivers began streaking up the field. I positioned my body as if I were going to defend the receiver lined up inside, maintaining my vision on the quarterback, which allowed me to read his intentions. The quarterback threw the ball to the receiver positioned to my outside.

At the last second, I readjusted my body so that I could defend the receiver whom the quarterback was targeting.

As I jumped, life slowed down like a slow-motion scene from a movie. My eyes were focused on the ball while I positioned my hands. I could feel every fan in the stadium holding their breath.

I caught it. The receiver grabbed me while I was still airborne. I could feel him bearing down on my shoulders. I tucked the ball in my right hand as tight as I possibly could.

The fall seemed like it took forever. When I finally hit the ground near the 5-yard line, the receiver was still trying to retrieve the ball. The hard fall was well worth the referee signaling a turnover in Clemson’s favor.

The stadium erupted. My teammates were just as excited as I was. With the stakes so high and us being on the losing end of the scoreboard, it was a sensational feeling to know that I had made a momentum-changing play.

I was bombarded by my teammates and coaches as I galloped back to the sideline. This was a very proud moment, like a dream from which I did not want to be awakened. The overwhelming feeling of love from the whole stadium was a humbling experience that I will never forget. Seeing the pride beaming from my coaches’ faces made all of those early-morning workouts and late-night film sessions worth it.

The score would remain within a single touchdown until the fourth quarter, when we pulled away for a 23-13 win, ending a three-year losing streak against a rival. We went on to win the ACC and the Playoff’s Orange Bowl.

My interception vs. Florida State is a moment that changed my life forever.

It reassured me that I made the right decision in choosing to enroll at Clemson University. It allowed me to prove to a lot of people back home that not only did I make the right decision, but that I played a pivotal role in ending FSU’s winning streak against Clemson.

Nothing compares to the feeling of celebrating with my team and receiving texts and kind words from all sorts of people from my past.

I am looking forward to facing off with Florida State this fall in their stadium, in my home state.