Most college football conferences have divisions. The SEC started the trend in 1992, when it added a conference championship and needed a way to pick two reps. It made sense at the time.

But several conferences have grown to 14 teams. That’s way too many for a division setup, since even a nine-game schedule means some teams go years without playing alleged conference rivals.

Really, every conference should get rid of divisions and just assign a few annual rivals. As you’ll see below, this would preserve major rivalries, ensure every team sees its whole conference, balance schedules, and remove the risk of a weak team taking a spot in a conference title game.

(How would a conference handle a three-team tie for first place? However it wants, but Playoff rankings make business sense, since you don’t want your long shot spoiling your contenders.)

Since each conference has its own unique issues, here are custom proposals for the entire Power 5. Most non-power conferences could also adapt one of these.

1. We started with the SEC, since its rivalries are the most complicated. Most everybody liked our proposal.

Scrapping divisions in the 14-team SEC would mean we could protect three annual rivalries for each team, plus ensure every other matchup happened every other year.

Result: no major rivalries lost, and every team visiting every SEC stadium once or twice every four years.

Here were those annual rivalries Bill Connelly and I picked, and here’s a bunch more about our SEC plan, including our finding that this would make every team’s two-year schedule strength basically equal:

2. In the Big Ten, teams would see each other even more often.

The B1G’s new nine-game schedule (as in, one more conference game than the SEC) means even non-rivals would play three out of every five years, in our system.

Here are the annual rivalries chosen by Alex Kirshner, Matt Brown and Bill, along with an explanation for the whole thing, including how this greatly improves schedule balance here:

The ACC has a mingled pile of identities, and its current divisions have neither coherence nor balance, largely because long ago someone decided Florida State and Miami must be kept apart. There are Southern football schools, teams from the Big East, private schools, and the North Carolina group, all piled haphazardly.

Because of that, let’s do four protected rivalries per team, with insights from Bud Elliott. For example, that’d mean all the Carolina teams play, plus we retain The South’s Oldest Rivalry (UNC-UVA), the Textile Bowl (Clemson-NC State), and a schedule-balancing Duke-GT series with 83 all-time meetings. FSU-Wake is the only totally forced pairing, and it balances FSU's tough group of rivals.

Associate Notre Dame is also in here. Figure out the standings impact of that however you like. ND has a ton of rivals, including a couple ACC snubs here, but we added Louisville because of proximity. They can learn to hate each other and surely have basketball emotions already.

The Pac-12’s nine-game schedule and 12-team roster means everybody would see everybody at least three out of every four years anyway. 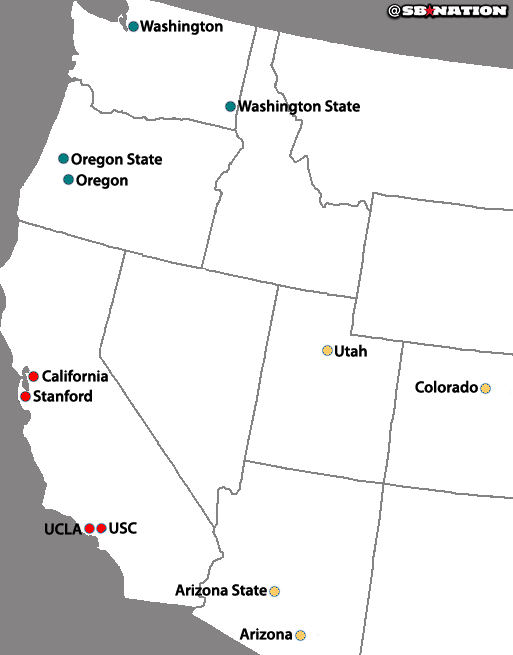 Pac-12 Championship berth aside, it would be cooler to win a four-team regional rivalry trophy than to win a division named after a word on a map, right?

Colorado and Oregon State would duck the mighty Cardinal, thus improving their bowl chances. This could hurt the conference’s Playoff odds, though.

5. The Big 12 is the easiest, but we can still make everybody happier.

Everybody already plays everybody every year, even if the Big 12 implements the dumb divisions idea that started all this.

So, we’ll just say to each team, "The Big 12 has protected rivalries now, and you're secretly Texas’ one true rival."

17 of usWhere would we commit if we were 5-stars?
Page 33
Steven GodfreyHow a season gets soundtracked by one song