Which college football teams are the best at turning money into wins? by Ross Benes and Molly Podlesny

There may be some truth to the popular notion that college football teams can purchase success.

The most successful programs, like Alabama and Ohio State, have been rewarded with national championships after they splurged on big-name coaches. However, there are many other programs, like Texas and Miami, who continue pumping money through the system without much recent success.

Since there are anecdotes to back up both, I decided to look at each FBS program to see which schools are getting the best and worst bang for their buck. 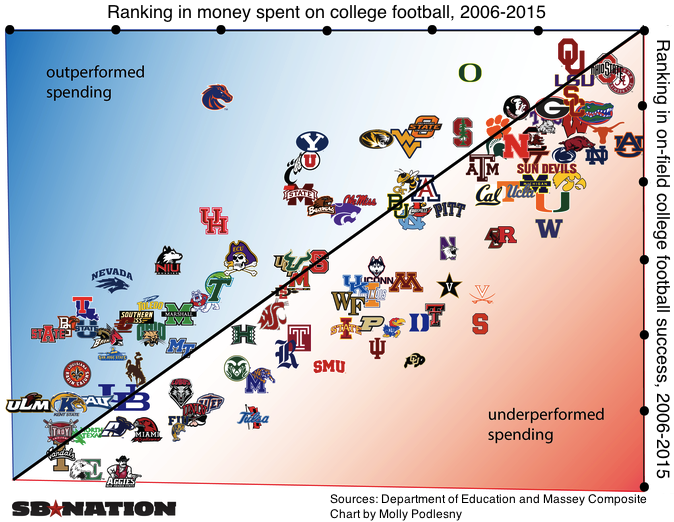 To see how much each school spent on football, I looked at data from the U.S. Department of Education. To measure on-field results, the Massey composite, an index that averages dozens of rankings including the AP Poll and computer ratings.

(Alabama had 13 combined losses in 2006 and 2007, so those seasons prevent them from reaching the very tip top of this chart, despite the four national titles. The difference between finishing first and fifth in the AP Poll feels like a huge distance, and the difference between finishing No. 30 and No. 35 feels minimal, but numerically, they can have the same impact. Because of that, a few forgettable seasons can really alter an average. Anyway, the point is certainly not to argue against Bama's dominance.)

Spending data was not available for the service academies, so Army, Navy, and Air Force are excluded, as are schools that have been FBS for fewer than 10 seasons.

The result spans from Auburn ($32.1 million on football-related expenses per year and one national championship) and Alabama ($31.4 million and four titles) to ULM ($3.1 million, though with at least more football success than some schools).

Boise State is by far the most efficient with its money.

The Broncos have outplayed their spending ranking by 62.7 spots, spending an average of $7.8 million. Most over-performers here are other smaller schools who've strung together a handful of successful seasons.

Mississippi State and Oregon stand out among Power 5 schools. Oregon has much more money invested in its program than these figures show, since they benefit from Phil Knight's donations. But Mississippi State has had back-to-back top-20 seasons despite spending a meager amount, relative to its competition.

Maryland and NC State had the smallest discrepancies between their spending and on-field performance, which puts them right on our chart's dotted line.

Syracuse, Colorado, and Virginia had the most distance between their spending and on-field rankings. Those teams have been so awful on the field, they don't come close to living up to their pedestrian spending. The Orange have spent an average of $18.2 million, with only three bowl trips to show for it.

Before you make too much fun of Syracuse, take these with several grains of salt.

The accounting methods many of these schools use are quite dishonest. Schools will report inflated costs in order to keep their reported profits lower, so they can cry poor when asking taxpayers and students for financial assistance. To inflate costs, schools will charge their athletic programs for things like "overhead," "university fundraising," and even "library renovations." And when athletic programs give out scholarships, programs can get charged the full price for an out-of-state student even though the marginal cost to the school for bringing on an extra student is minimal.

In the 2014 fiscal year, 26 of the 115 schools in our data set (22.6 percent), reported profits of $0, meaning their football-related expenses and revenues were exactly equal. If we are to believe the accounting, about one-fourth of college football programs at the top level neither profit nor lose a single dollar.

The most entertaining case that stuck out was TCU, which claimed that in every single year from 2005 to 2011, the school perfectly balanced its football expenses and revenues.

And while this data has its limitations, it's good for giving you a ballpark estimate. It's uncertain which schools most exaggerate their spending, but it is certain that no matter how much they exaggerate there's no way in hell a school like Iowa State can report spending levels similar to Ohio State.

For what it's worth, there was a 0.79 correlation between schools' on-field rankings and their football-related expense rankings. In other words, there's a pretty strong relationship.

Here's all the spending data, and then let's look at revenue.

Because spending is just one part, let's also examine how revenue translates to success. 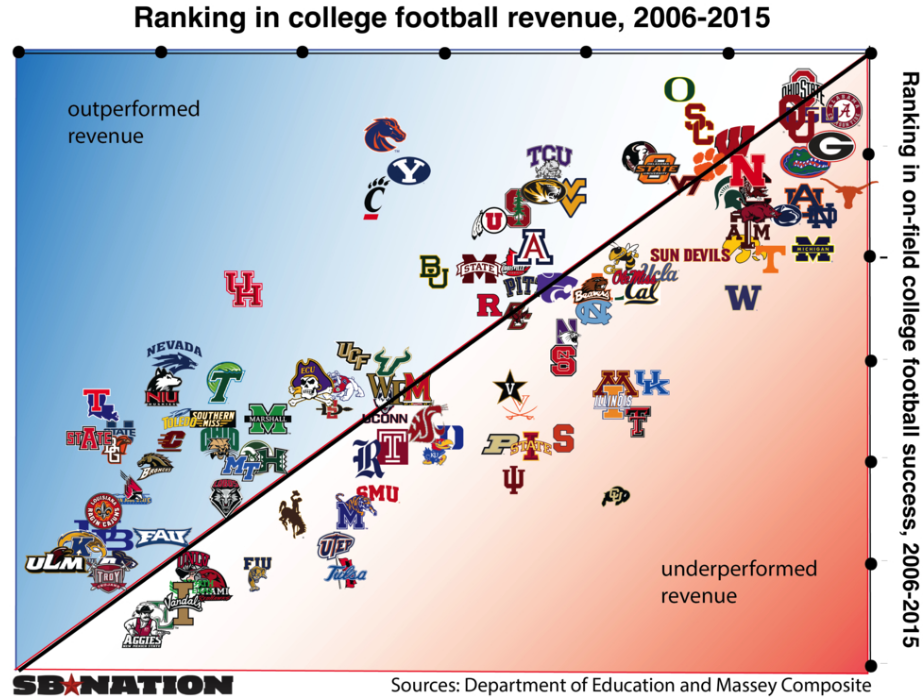 On average, FBS programs this past decade made $23.3 million per year. And the median was $20 million.

Again, Boise State gets the most out of its money.

On the field, the Broncos have exceeded their revenue ranking by 47.3 spots. Despite making just $13.5 million per year on football, Boise has had various top-10 finishes, multiple Fiesta Bowl victories, and several Power 5 upsets.

Among Power 5 programs, TCU, Stanford, Utah, Missouri, and Baylor stand out. However, Utah and TCU weren’t in a Power 5 conference for a good chunk of this analysis.

Wake Forest, Pitt, Oklahoma, Troy, and Clemson had the smallest discrepancies between their revenue and on-field success, which puts them on the chart’s dotted line.

Colorado got the worst production out of its revenue. Over the past 10 seasons, the Buffaloes made $26.7 million per year, but they have been the worst Power 5 team, with a Massey ranking of 85.9, which is nearly 50 spots below their revenue ranking. (Kansas got a few good years from Mark Mangino, otherwise KU's figures would probably be even more dismal than Colorado’s.)

Texas Tech, Indiana, and Washington were also pretty bad, considering how much money came in.

It’s pretty easy to laugh at Colorado, but take these results with a grain of salt.

With that said, this data is the best of what’s publicly available, and it gives you a ballpark estimate of how well teams are performing relative to how much money they make.

For what it’s worth, there was a 0.80 correlation between schools’ on-field rankings and their football-related revenue rankings, which is a pretty strong relationship.

This sortable table shows each team's average Massey ranking, revenue ranking, and the difference between the two.

It also includes "profit" rankings, which are simply total football revenues minus total football costs. Again, remain skeptical of anything to do with "profit" in college football.