This February, Houston landed its first ever five-star prospect en route to a composite class ranking better than 26 Power 5 teams. The Cougars weren't the only outsider to crash the party on National Signing Day. Nineteen different mid-major universities outrecruited at least one Power 5 program when the dust settled on 2016.

This winter wasn't an outlier. It was the continuation of a trend that has kept some power schools anchored to the bottom of their conferences and made outsider programs like Cincinnati and Boise State constant postseason presences. So which Power 5 teams get outrecruited by the FBS's little brothers the most? And which non-major programs are the most impressive when it comes to snapping up high-level prospects? Let's take a look at 247Sports' composite rankings from 2010 on to get a better idea. 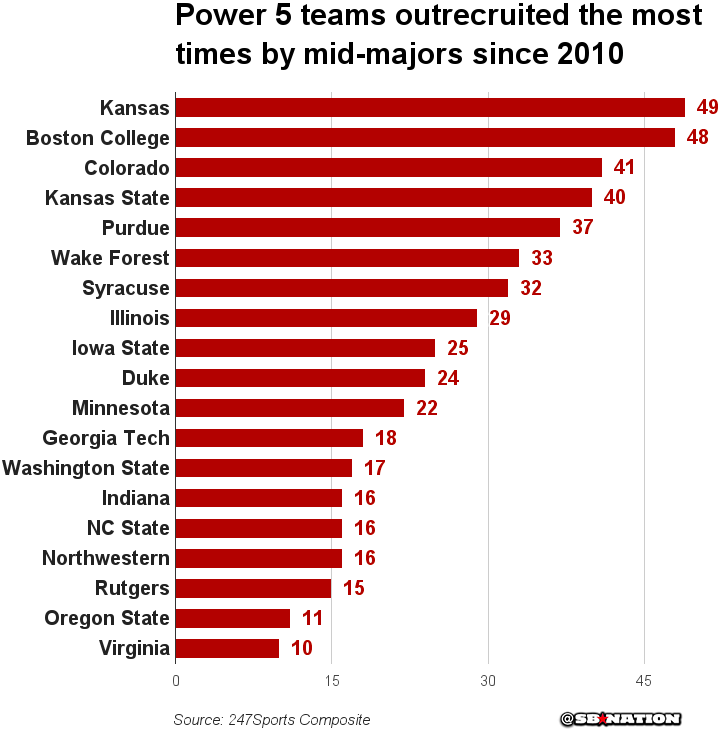 Thirty-seven of the country's 64 Power 5 teams were outrecruited at least once by a non-major in the seven seasons between 2010 and 2016. Four teams in particular made it an art form. No team lost recruiting battles to non-Power 5 teams quite like Kansas, who lost to an average of seven outsiders per year.

Boston College, a team beaten in the recruiting rankings 48 times by overachieving mid-majors, has also established itself as a rare breed in poor recruiting. The Eagles have finished in the bottom three among Power 5 conference teams in three of the past six years.

This lack of elite recruits has had an impact on the gridiron. The "top" five teams have combined for only 11 bowl appearances (six of which came from Bill Snyder's Kansas State) in the past seven seasons. 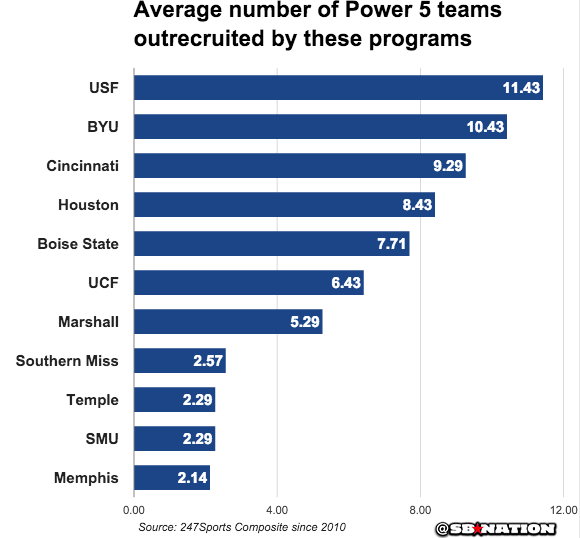 Recent upswings at Houston and South Florida have helped make the AAC the class of college football recruiting outside the Power 5. Tom Herman's latest Cougar class outranked 26 other major conference programs. USF, on the other hand, has beaten at least two Power 5 teams on the recruiting trail each year since the turn of the decade.

While there is certainly a group of usual suspects who can be relied upon to have a strong recruiting trail presence, 32 different programs can boast beating a Power 5 team between 2010 and 2016. Granted, that's usually Kansas or Boston College, but it's still an achievement that can lead to sustained success down the line. Utah State, for example, has topped only two major conference teams in the recruiting rankings since 2010, but the Aggies are riding a five-season bowl streak.

Alex KirshnerThe simplest way to rank recruiting states
Page 31
17 of usWhere would we commit if we were 5-stars?