ZILLER: The common perception is that the Hawks have taken a step back on account of losing DeMarre Carroll and not convincingly solving their backcourt shot creation issues. (I am not a Tim Hardaway Jr. believer.) That said, they are coming from a very high perch and can afford to find their way through some issues this season. Only Cleveland has a better frontcourt rotation in the East, in my estimation. Jeff Teague is really good, Dennis Schroder is really young and there just aren't many scary teams (with the exception of Cleveland) in the East. Is everything fine here? 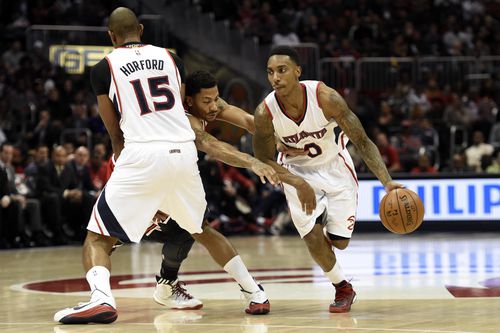 Biggest loss: DeMarre Carroll, who took a big deal from the Raptors.

In one sentence: The high-flying Hawks of January aren't coming back, but this team should still be a major factor in the East.

FLANNERY: Everything is fine and that's not a ringing endorsement. Fine gets you 50 or so wins and home-court for a round or two. It might even get you into the conference finals when the planets align and things go exactly right. Fine is what the Hawks are and I'm afraid that fine is all the Hawks are going to be in the future. That's not a bad thing, but it's not great either. It's fine.

I'm not a big THJR fan either, but I did think it was interesting that they loaded up on size. Grabbing Tiago Splitter for basically nothing was a no-brainer in any context. Still, I'm wondering if this is an over-correction to getting crushed on the boards by the Cavaliers in the playoffs. What is this team going to be this year? Their identity was rock-solid from December through the end of the regular season.

ZILLER: The Splitter issue to me is so difficult to assess primarily because Paul Millsap could have (and apparently almost) left in free agency, and Al Horford is a 2016 free agent. (And in fact Horford is a top free agent barring injury.) They kept Millsap on a rich deal, and they'll max Horford out if he'll let them. But given the Splitter acquisition, they are prepared to survive if he decides to move on. In the meantime, they have three expensive and high-quality players at the big positions in a league getting progressively smaller.

There's also a question of how much Carroll really mattered. His rise and eventual payday was a wonderful story, but if Thabo Sefolosha is healthy, can't he slide into that role and prevent a deep slip by the Hawks? They finished the season ranked No. 6 in both offense and defense. The talent, style and coaching indicate those are not flukes. What's to say 60 wins and a real tough time against Cleveland aren't repeatable?

FLANNERY: Well, they don't have Carroll, for starters. His value was evident during the Cleveland series when they had no one else who could even hope to guard LeBron James. The Sefolosha thing is a little strange to me. He would have helped during the playoffs, no doubt, but he's not on the same level as Carroll. Losing him for the playoffs was awful and how it happened was despicable, but Thabo barely shot 32 percent from three the last two years. He's an important player, but not a game-changer at this point in his career.

Atlanta is being forgotten after losing a key starter this summer. Sounds familiar.

Without Carroll, Hawks load up inside

The Hawks lost their starting small forward, but upgraded up front with the addition of Tiago Splitter.

Hawks try to prove doubters wrong again Without Carroll, Hawks load up inside

The Carroll argument gets to the heart of my point: It's a little disingenuous to dismiss his career year, and at the same time assume that everyone else's careers will continue rolling right along in an upward trajectory.

I hate being in this position, by the way. I LOVE the Hawks. I admire what they stand for, how they play for each other and really enjoy talking to those guys. It's a really cool thing what they did last year. I'm just not optimistic it will ever be that good again.

ZILLER: I don't think you love the Hawks at all, Paul. If you did you would join me in irrational hope they can continue to be different and awesome. You need more blind faith. You need to think less.

But yes, this is not the best turn of events after a whirlwind season, and you're right about the difference between Carroll and Sefolosha. I wonder if Schroder develops a bit more early on -- a summer with Dirk should help on that account -- will the Hawks will look to move Teague for value pieces on the wing and a reserve scorer? Atlanta strikes me as a team that could use someone like Eric Gordon, for what it's worth. He doesn't defend anything like Carroll (obviously) but if you need an athletic shooter (which I think would be helpful for the Hawks), he's a nice fit who appears to be attainable.

FLANNERY: I want to believe. I really do.