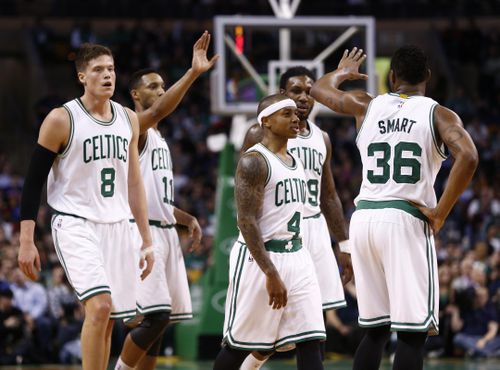 Best addition: Amir Johnson, a blue-collar forward who will provide Boston with a true defensive anchor up front.

Biggest loss: Brandon Bass, whose steady performance will be missed up front.

In one sentence: If the Celtics maintain their form from the second half of last year, why can't they push for a top-four seed?

FLANNERY: The Celtics didn't make the big splash this summer. They couldn't move up in the draft and free-agent targets like Kevin Love simply re-signed rather than test the market. They did make a number of smart moves that didn't blow up their long-term flexibility, such as getting Amir Johnson on a short-term deal and taking on the final season of David Lee's contract. They're better, I think, but what does that mean?

I'm curious to hear your thoughts on the C's because the projections for this group will be all over the map.

ZILLER: No one doubts the cult of Brad Stevens anymore, even given the sweep at the hands of Cleveland. Once the Celtics lost Rajon Rondo, they looked like a cohesive if underwhelming team that could beat anyone any given night and take care of business against lesser foes. It seems like some of the doubts about the Celtics stem from that disappointing offseason you mention.

But in a macro sense, the Celtics were good last year and are better now. Jonas Jerebko is a nice fit, and you hope one or two of the fringe youngsters (James Young, Perry Jones, Jordan Mickey, Terry Rozier) will work out.

The real meat of the improvement here should come from Marcus Smart. If he starts to reach his potential, the Celtics go from interesting to dangerous, especially with Stevens' acumen, Avery Bradley's defensive talent and Isaiah Thomas' willingness to take 20 shots a game off the bench. That's such a fun backcourt only likely to get better. I'm bullish on the Celtics in the short and long terms.

FLANNERY: You know what's weird about these Celtics? They are kinda fun. That's not a word I'd tend to associate with the franchise. Winning is serious business around here, and while those KG/Pierce teams were fascinating and sometimes hilarious, they were very rarely ... fun. This is a League Pass favorite team that might actually be pretty good.

Aside from Smart, the two young guys who intrigue me the most are Rozier and Young. The one was a draft-day surprise and the other is such a blank slate that potential isn't even a word I would use to describe him yet. I have no idea who's going to be around in a few years, but they have talent at every spot on the roster; ill-fitting that it may be.

So, what's the projection? I could see anything in the 40s up to and including winning the division and getting home-court in the first round.

Read these other Celtics previews!

Cs will go as far as Stevens takes them

Boston's head coach remains its biggest asset. What will Brad Stevens do for an encore?

The Celtics picked up two solid veterans up front.

Read these other Celtics previews!

ZILLER: They are in the most shallow division and one with the least fearsome leader (sorry, Toronto). So that's feasible. I think 45 wins is a solid target, but anything over .500 is a success. I also think Isaiah is going to be an All-Star. What a steal for Danny Ainge.

FLANNERY: Big picture take in 100 words or less: Are they making progress? I think they are but anyone expecting a linear gameplan hasn't studied Danny Ainge's moves over the years. I still don't know how he gets that Franchise Player to Boston, but I do like the approach.

ZILLER: They are making progress. They were better last year (on the court and on the asset list) than the year before, and they will be better this season. That's the right direction! They haven't made the leap yet, but there's time and resources to accomplish that.