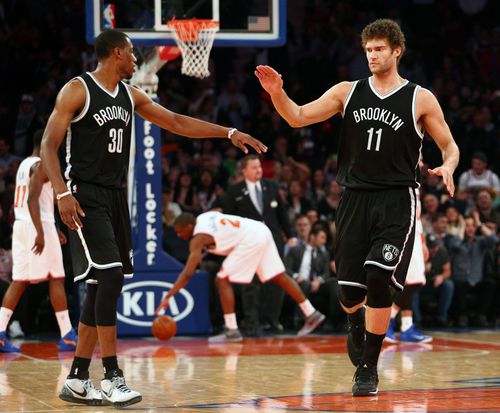 Best addition: Rondae Hollis-Jefferson, who will hopefully inject some much-needed athleticism on the wing.

Biggest loss: Deron Williams, who had to go but still leaves a big hole at point guard.

In one sentence: The Nets were pretty damn uninspiring last year and have gotten worse.

ZILLER: The Nets didn't commit to a full rebuild because they re-signed Brook Lopez and retained Joe Johnson. But the Deron Williams era is over and Brooklyn actually looks fairly young for the first time since early-2011. A healthy Lopez can carry this team to the playoffs if there's enough backcourt production and Lionel Hollins can get them to defend. And as we all know, there's no sense in relying on draft picks, so Brooklyn should be pushing for the postseason.

But is this team really relevant to the greater NBA at all? Is this in a way a lost season, just 82 games of treading water until Johnson's massive deal comes off the books?

FLANNERY: You have a lot more faith in Brook Lopez than I do, frankly, and I'd wager that Joe Johnson will be suiting up for another team before the end of the season. I don't see the playoffs in their future and there's no reason to tank. But there is a reason to cut costs and trim payroll, and that's to prep the franchise for a sale. They can deny it all they want, but that sure seems to be the M.O. these days.

Are they relevant? No. What a weird franchise this had turned out to be since leaving New Jersey. And they were really freaking weird before that.

ZILLER: The first major entity to leave New Jersey and get stranger.

I wonder how Hollins' reputation is going to take another iffy season, especially given Jason Kidd's glorious success in Milwaukee. (Even if Kidd's Bucks barely edged Hollins' Nets in the standings.) Remember that it took Hollins time to mold Memphis into the style he demanded -- time and a lot of turnover. The New York media is less patient, and while the Nets remain overshadowed by all things Knicks, there's going to be pressure sooner rather than later. I presume Billy King will be given his walking papers the second someone takes the franchise keys from Mikhail Prokhorov, but Hollins is a bit trickier. He was a bit of a coup when they landed him, but he just does not fit at all with this roster right now.

Joe Johnson is such a damn professional that it's a shame his career has turned into a punchline just because someone paid him too much. The Curse of Rashard Lewis.

I was high on the Hollins hiring last summer, but it didn't work out last year and I don't see how it improves beyond this one. At some point, the Nets have to pick a direction and ride it out.

Read these other Nets previews!

The Nets are Brook Lopez's team

With Deron Williams gone, Lopez must become the face of the franchise.

Nets try to uncover diamonds in the rough

Brooklyn signed several younger players that have been cast aside by other teams.

Read these other Nets previews!

That Kidd comment cuts deep. It's a reminder of what they tried to do and who's no longer there: Pierce, KG, D-Will, Kidd. Hell, even Mirza Teletovic is gone. You know how sometimes we defend deals that went bad because the process was right? This is not one of those times. I didn't think they were going to win a title, but I am surprised at how disastrously bad it's turned out.

ZILLER: "There's Always Bargnani" is actually the sequel to "We'll Always Have Linsanity."

Is this the least hopeful situation in the league considering the draft pick deficit, or does the market override that? I think under new management the Nets could be really attractive to a young free agent looking for a place to become a marquee star. This is still New York City we're talking about.