ZILLER: There is good news in Charlotte! That good news is ... Lance Stephenson is gone. There's a sense that his removal alone might get the Hornets back to where they'd been before in the Al Jefferson-Steve Clifford-Kemba Walker regime, which is "not embarrassing."

But I have a concern: the rest of the frontcourt. After a weird offseason, Charlotte's power forwards and centers now include Jefferson, Spencer Hawes, Cody Zeller, Frank Kaminsky and Tyler Hansbrough. This is the most unintentionally hilarious rotation ever, correct? 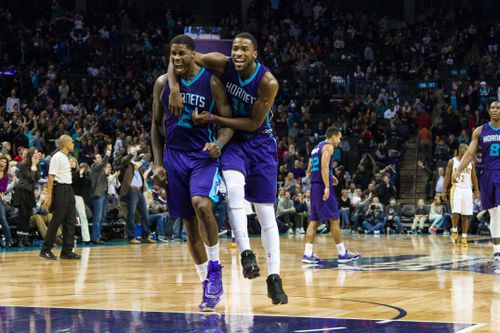 Best addition: Nicolas Batum, who provides the playmaking and shooting the Hornets desperately need on the wing.

In one sentence: The Hornets should be better, but not better enough to justify their short-term strategy.

Blog: At The Hive

Charlotte seems like a classic case of a team that had some success and then tricked itself into believing that it was building something instead of peaking. It's a fool's gold team. (See: Lance, signing). That frontcourt doesn't do a lot for me, but I did like the other moves they made, like adding Jeremy Lin and Jeremy Lamb for next to nothing. Nicolas Batum is the interesting one here. He had a dreadful season last year. If he can get back on track, then maybe they have a chance?

A chance at what is the question. I know it's the East, but this isn't a top four team in the conference and it may not be a playoff team either. What then?

ZILLER: The combination of Batum and Michael Kidd-Gilchrist is simultaneously interesting and confusing. Can they play together as a wing combo with Walker as your starting point guard?(UPDATE: Kidd-Gilchrist suffered a season-ending shoulder injury after this was published). Do you go small with Jefferson at center, MKG at the four and start Lin and Walker together in the backcourt? If so, how do you get Kaminsky and Zeller enough burn to justify their presence and float their value? There are some intriguing combos possible and Clifford can coach the hell out of a defense, but I'm not confident this is going to add up to something better than 35 wins.

On Lance: I thought (like many) that'd be a nice boost for Charlotte. On paper, he offered playmaking and more wing defense at the two, which are two things the Hornets needed. It goes to show that theory doesn't always translate, especially when you're dealing with ducks like Lance. (Which should give us pause about the Clippers, but I digress.)

FLANNERY: I think Clifford is in a really tough spot here. He'll be fine in the long run because he's one hell of a good coach and incredibly well respected around the league. However, I get the sense that management thinks they should be better than they are and that usually falls on the coach regardless of how much he gets out of the roster. I'm with you, though, 35 wins is the baseline and maybe they can push it to 40 if they stay healthy. Will that be enough for ownership?

I was on board with Lance, as well. You take a shot and if it doesn't work you regroup and try again. That's all fine, but there does seem to be an awful lot of duplication on the roster with Hawes and Kaminsky. Am I wrong to think that Zeller can still be the best player of that bunch?

Read these other Hornets previews!

It's playoffs or bust this season

The Hornets made moves with a clear eye toward making the postseason this year, even if that harmed their future

The Lance Stephenson disaster is over

The Hornets are hoping that Stephenson's departure proves to be addition by subtraction.

Read these other Hornets previews!

ZILLER: It could be any of them, really. Despite Hawes' struggles in L.A. he's a legitimate NBA center who can pass and shoot (sometimes). He's the second-best big man on the roster right now.

Kemba is going to have to do SO much, though. Even if Clifford has a top five defense again, the only way the offense is above average is is Zeller or Kaminsky join Jefferson as reliable scorers or if Kemba goes up another level. He might carry the heaviest offensive weight of any guard outside of Oladipo or Isaiah Thomas going into the season.

FLANNERY: Jeremy Lin can help with that, I think. Take a little pressure off the ball and make some open shots. I really like Kemba as a player and I think he hasn't quite found the right balance yet. He's still young. So are Zeller and MKG. That's not a great nucleus, but it's something. I just don't think they have the patience to see that all the way through, so you wind up with quick fixes and the like. The Noah Vonleh trade could really haunt them down the line.

So, yeah. The Charlotte Hornets. Might be decent, might not, probably won't be as good as people want them to be when it's all said and done.

ZILLER: That's an apt description not just for the 2015-16 Hornets, but the entirety of the Charlotte franchise since re-institution. Poor Charlotte.