ZILLER: Right up front I'll note that I have the Bulls as my No. 2 seed in the East. Misfortune continues to befall Derrick Rose, but I think the talent base of this team -- from Jimmy Butler to Joakim Noah to Nikola Mirotic to Pau Gasol -- is just really special. To me, with the exception of all-important point guard depth, this is a complete team. And I'm excited about the Mayor coming to the NBA.

FLANNERY: I'm not there. This is the same team as last season, and even if Butler and Mirotic improve, there were signs of wear and, well, staleness last season. You're expecting Gasol to have as good a year as last season when his production was a pleasant surprise. I love Pau, but he's 35 and that was the most minutes he's played since his last great season in 2011. You're also expecting Noah to recover from whatever ailed him last year. Tom Thibodeau is gone, but all those minutes are still worn by his players. (Mike Dunleavy's back injury does not help matters at all.) 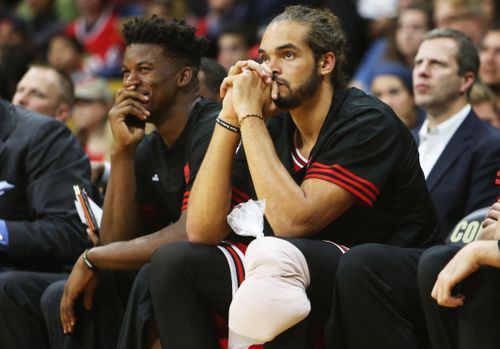 Best addition: Fred Hoiberg, who was hired out of Iowa State.

Biggest loss: Tom Thibodeau, who was fired despite leading the Bulls to the playoffs in five straight seasons.

In one sentence: The Mayor should improve the offense, but if Derrick Rose can't stay healthy it likely won't matter.

And by the way, Thibs was and is an objectively fantastic coach. He's one of the best defensive minds of his generation and, say what you will about his methods, his team's overachieved during the regular season once the injuries hit. I'm sure Fred Hoiberg will be a fine NBA coach and he has a lot of pro experience, but there's going to be a learning curve. I think the Bulls are one of the top four teams in the East, but I don't see them as a clear No. 2 and I could also see them slipping.

Follow-up: Is Jimmy Butler the best player on the team?

ZILLER: I think Thibodeau is a really good coach, and he'll be back before we know it. That said, his offenses only rarely worked (owing a lot to talent issues, for sure) and the Bulls still have a number of top-flight defenders (when healthy). Between Butler, Noah and Taj Gibson, so long as Hoiberg's tactics are NBA-ready, this can be an elite defense without Thibodeau.

Where I'm excited about The Mayor, though, is on offense. I hate comparing coaches, but I sense a little Steve Kerr in Hoiberg. He seems to trust his players more than Thibodeau did and he's interested in the so-called beautiful game to some degree. We won't know until we know, but I like what I'm reading.

Butler is pretty clearly the best Bull, and in fact I'd argue he's the best player individually at each end of the floor. He has certainly made Derrick Rose's absence less painful and he's a legit stopper on the wing. I'm skeptical of the new-found interest in playing some point guard -- he's not that type of passer or court-reader -- but he's definitely in the peak Joe Johnson range now with a chance to get better.

As you note, Noah's recovery to form is a huge issue here. That's the one question mark that could totally swing the future of the club one way or the other. He was an MVP candidate two years ago, but he looked so hobbled last season.

FLANNERY: Noah is the key for me. When he played at such a high level two years ago, the Bulls were legit. When he slipped they were still good, but not nearly as dangerous.

Like you, I'm curious to see what kind of coach Hoiberg will be in the pros. The Bulls are 10-deep when healthy and there's still Doug McDermott and Bobby Portis to integrate into the lineup to some degree. I'm particularly interested in how he uses Mirotic, who was dynamite at power forward.

We should probably talk about Derrick Rose at some point, yes? I honestly don't know what to say anymore.

The Bulls have the same squad back this season, but with a new coach at the helm. Can he bring additional playoff success?

ZILLER: Leaving the off-court stuff alone, his career has just tumbled into sadness. And we see this happen every few years; the last one was Brandon Roy, and before that Shaun Livingston (who got back to some level of prominence) and Grant Hill (who had a late rejuvenation). Luck affects everything in both directions, and it's been a bitch to Rose since that fateful drive against the Sixers.

But because there doesn't seem to be one chronic issue -- his current malady is a broken face -- I remain hopeful he can find a level of starter-quality effectiveness. I'll also note that the Bulls were pretty good without Rose last season. It was Noah's injuries that did them in.

FLANNERY: And they'll stay pretty good no matter what catastrophes befall them this season. There's just too many ifs, from the injuries to the new coach, for me to grab a seat on the bandwagon. To your original point, there are a half-dozen Eastern Conference teams that could, in theory, get that second seed if everything broke just right. The Bulls are one of them. I'm just not sure there's any reason to hope for more than that.