ZILLER: So the Mavericks objectively had a bad offseason thanks to the DeAndre Jordan imbroglio. And unlike the Blazers, Dallas didn't even manage to get considerably younger: they added Wesley Matthews on a massive contract and grabbed a bought-out Deron Williams. They sure do seem to be betting on a combination of career rejuvenations and quick injury recoveries, don't they? And given their tenuous position in the West playoff picture, plus the improvements made by teams behind them, it sure looks like the empire is falling. 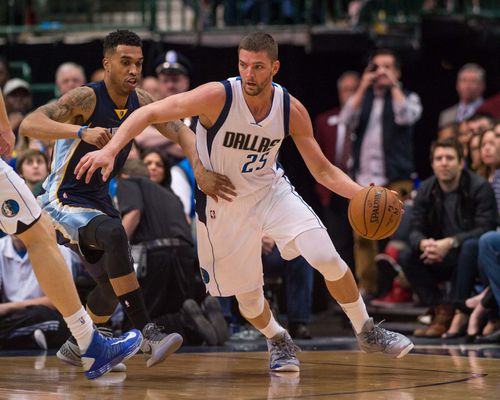 Best addition: Deron Williams, who has the opportunity to revitalize his career playing in his home state.

Biggest loss: Tyson Chandler, who took a big deal from the Suns.

In one sentence: The Mavs will continue to feel the burn of DeAndre Jordan's decommitment, but Williams and Matthews could be exciting additions if they can regain their previous form.

FLANNERY: It sure does. We can examine the individual transactions -- I love Wes Mathews, but that's a huge risk. Deron Williams? Good get, maybe even a great one -- but really this speaks to a collective hemorrhaging of talent and years of completely ignoring areas like the draft. Since winning the title, the Mavs' m.o. has been too clever by half. Whether it was dumping Tyson Chandler too early or wishing/hoping/praying that the likes of Rajon Rondo would get his game back, it's been one shortsighted move after another. This is the end result.

Sure, they got screwed in the DeAndre affair, but I wasn't buying the notion that they could turn him into a franchise center at all. Unless Dirk has one more great season in him, I think this could get ugly quick.

ZILLER: That's the thing, isn't it? We've been saying this since 2012! Yet Dallas always finds a way. As you indicate, if you squint hard enough, you can see the outlines of a tenable West playoff candidate. They lost Monta Ellis and Tyson Chandler, which hurts, but watching Rondo leave might be addition by subtraction. A healthy Matthews is better than Ellis; Deron has the potential to be better than Rondo in Dallas, Jameer Nelson (who started 23 games last season) or J.J. Barea (10 starts). That team won 50 games. The center position is a massive question mark even in the most optimistic light. But how many West teams will kill them there? You can see the outlines of a decent team. Again. For like the billionth time.

But as I indicated earlier, this just seems like one or two too many bets. My question is what the hell you do if things go sideways early. Jettison veterans and build around Chandler Parsons?

FLANNERY: Yes, build around the guy coming off knee surgery. I don't know, it's a good question. The Celtics have their pick if it falls out of the top 7, which seems like a decent bet. After that, it's the same old salary cap dance with free agents. I have no doubt that Mark Cuban will do everything in his power to rebuild quickly but some things are out of his control, as evidenced by the Jordan situation. Free agency sounds great in theory, but theory is what got them into this mess. (I do like Justin Anderson a lot, however).

Read these other Mavs previews!

Mavs must make do with another overhauled roster

After DeAndre Jordan backed out, the Mavericks patched themselves up as best they could.

Mavs just may have a chance in West

The Mavericks have a lot of question marks coming into this season, but if they can put all the pieces together, the playoffs are within reach.

Read these other Mavs previews!

As for this year, it wouldn't shock me if they made the playoffs, but I would be surprised. That would mean that an awful lot of things went right from a health standpoint.

Let me bring up the German elephant in the room: How much longer does Dirk have? He showed signs of slippage last year, but I'd bet that he has at least one more really good year left in him and a few more solid ones after that. Still, that's a lot to ask, even for a living legend.

ZILLER: He's noticeably older these days, and can't come close to carrying the team as he'd done even as late as 2013-14. He ought to be on a Duncanian minutes rotation, too; the Mavs' lack of depth hurts there, because he's still much better than the other options.

He's not playing elsewhere in my opinion, so we could be seeing the last of him in 2016-17 when his discount contract ends. Speaking of which, I wonder how he feels now to see what that gift to Mark Cuban got him. I imagine he still feels quite rich, but ...

FLANNERY: I imagine he feels like it was a risk worth taking, which also sums up the last few years for the Mavericks. Now it's time for the consequences.