ZILLER: I don't get it. Didn't the Nuggets try this last year? And by "this," I mean coming into the season with some raw young prospects, some underperforming veterans and a defense-first coach and seeing what happens in a thoroughly stacked West.

The three big differences are Michael Malone instead of Brian Shaw (should be an improvement based on everyone in Denver not hating Michael Malone), Emmanuel Mudiay instead of Ty Lawson and a healthy Danilo Gallinari. In total, that's an upgrade: Malone will have these guys working (something they did little of last season) and Gallo is important. But to me, this doesn't move the needle enough. 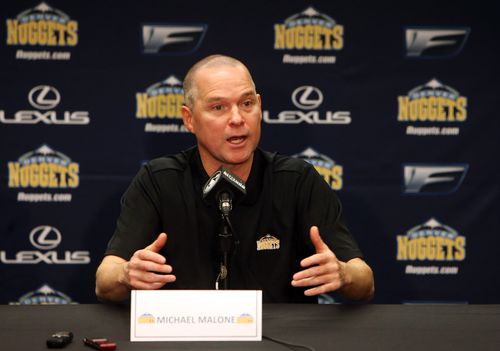 Best addition: Emmanuel Mudiay, who the Nuggets drafted No. 7 overall but is already considered a frontrunner for Rookie of the Year.

Biggest loss: Ty Lawson, who was sent to Houston in exchange for spare parts just a few days after being arrested for suspicion of driving under the influence.

In one sentence: This season won't be a pretty one in Denver, but there does finally seem to be some light at the end of the tunnel.

FLANNERY: You and I are both big fans of Malone. His presence alone should be worth a few wins, to say nothing of on-court competence. And while I think Ty Lawson is a good player, that's an addition by subtraction move for the franchise. Add in a healthy Gallo and the Nuggets might be closer to .500 than the backend of the lottery. Still, this seems to be a team caught between a youth movement and some vague notion of competitiveness. Was Jameer Nelson necessary? Why extend Wilson Chandler?

Still, I like some of the young players. What do you think we can expect from Mudiay this season?

ZILLER: Rookie point guards notoriously struggle to get up to speed early on and shooting was one of the issues with Mudiay to begin with, so on paper it looks like an uphill battle. That said, he's explosive and fearless, and that will go a long way in Denver, who has athletes to run with him (especially Kenneth Faried) and that famous altitude to wear out opponents. Denver's feistiness this season depends heavily on how willing Malone is to let Mudiay make lots of mistakes in the interest of running amok.

I'm interested to see how Jusuf Nurkic fits with Malone. In Sacramento, Malone was fully content to feed DeMarcus Cousins despite the league's move toward open play and shooting. Nurkic isn't as skilled as Boogie (by a long shot), but he's a mountain and has lots of potential, so developing that aspect could pay big dividends. He's also the only player in the league Boogie might think twice about punking.

FLANNERY: As with everyone else, I loved Mudiay in Summer League. Vegas qualifiers abound here, but the kid looks like he has the goods to be a special player in the league. Sure, it will take time but Malone should let him play through his mistakes. In that sense it is good to have a pros pro like Jameer around to show him the ropes. Nurkic is fascinating, and terrifying. I would not want to choose between him and Boogie in a brawl.

I'm a little higher on the Nuggets than you are from a competitive standpoint. I could see them hanging around long enough to be one of those in-between teams at the trade deadline where they could convince themselves to be buyers rather than sellers. That's an iffy proposition for a team with an identity crisis.

Let's play amateur GM: What would you do with this roster?

ZILLER: I'd leave J.J. Hickson at an airport of his choice. I'd try to get a draft pick for Kenneth Faried. I'd try to trade Darrell Arthur to free up some space for the non-Nurkic big prospects like Joffrey Lauvergne and Nikola Jokic. I'd ask my coach to please play Gary Harris and (to a lesser extent) Will Barton over the vets like Mike Miller and Randy Foye. Did I mention leaving J.J. Hickson at an airport? I feel like that's important.

Denver Stiffs previews the 2016 season for the Denver Nuggets as part of SB Nation's NBA Preview.

The Nuggets don't have to start winning on the court just yet, but their young players need to improve.

FLANNERY: Sam Hinkie just called. He wants to know if the airport transfer is legal under the CBA.

I'd probably do the same, honestly.

ZILLER: Faried could be a nice fit with Mudiay and Nurkic, but I'd rather focus on Mudiay and Nurkic and get a passer or shooter (or both!) at the four. My Faried fandom has run its course.

Where do you think Denver falls in the West? I have them at 13 or 14, ahead of Minnesota and maybe L.A. They could beat Portland, Sacramento and Dallas too, if things break right.