FLANNERY: Back in November when the Pistons were staggering to a 3-19 start, Stan Van Gundy effectively ended a tense pregame presser with the line, "I'm not a patient man." A few weeks later, SVG waived Josh Smith and his team suddenly won seven straight and nine out of ten. That remarkable turnaround tended to obscure the fact that Detroit went 18-26 after that and were lapped in the playoff chase by the Bucks and Celtics.

Van Gundy the team president made a number of moves during the offseason and this looks a lot more like the kind of team that Van Gundy the coach would like to direct. There are shooting bigs, more athleticism on the wing and one potentially dominant big in Andre Drummond. I'm a big believer in Van Gundy's coaching acumen, but why do I feel like this team isn't truly among the playoff contenders in the East? 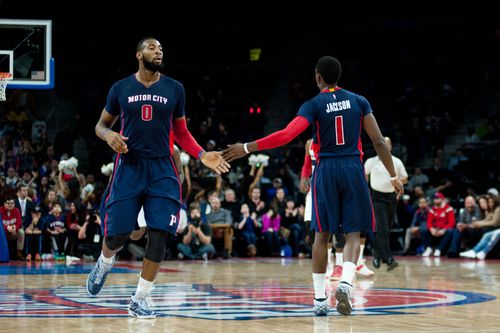 Best addition: Marcus Morris, who will play on a team without his brother, Markieff, for the first time in two years.

Biggest loss: Greg Monroe, who landed a monster deal from the Bucks.

In one sentence: The Pistons have finally put together a roster that Stan Van Gundy can work with, but we’ll have to wait and see just how well it meshes around Drummond and Jackson.

ZILLER: Because the roster is still bad. There hasn't been one move Van Gundy has pulled that has inspired me to think, "Good job, Stan" with the exception of nabbing Stanley Johnson. He's had two free agency periods and a trade deadline to work and he's come up with ... Reggie Jackson, Marcus Morris, Aron Baynes and Ersan Ilyasova. What am I missing?

Brandon Jennings was excellent after the Smoove dismissal, but obviously he and Jackson are going to have a tough time thriving together. Drummond is a monster, but he's one guy. I think they can make the playoffs, but I can't bet on them over Indiana, Boston, Miami or Milwaukee.

FLANNERY: Well, I like Ilyasova in that spot, for sure. I'm not as down on the new additions as you are in the aggregate, but the process left a little to be desired. Jackson's a classic test case. He put up some obscene numbers after the trade, but that contract will weigh heavily if he struggles. This goes back to the patience bit and why it's always dicey when coaches have full roster control.

So, let's talk about Drummond. We're all anticipating big things from him and he has done well, especially considering his age and the questions that dogged him during the draft process. Is this the year that he breaks out?

ZILLER: Quickly on Ilyasova: I'm not sure there's a less consistent stretch four in the league, and I think his defensive struggles (which made him a less-than-50-percent playing time guy in Milwaukee) could be a real problem next to Drummond.

Pistons finally have the team to play SVG's style

It took over a year on the job but the Pistons finally look ready to play Van Gundy's style of basketball.

Speaking of which, I do think Drummond is ready. His numbers with Monroe off the floor have been strong, and Van Gundy has made a concerted effort to put floor-spacers around him, which should give him even more room to do his Dwight impersonation in the lane. He seemed to have good offensive chemistry with both Jennings and Jackson (individually, at least) and aside from the free throws and some key defensive concepts he's on track developmentally.

I am concerned about two other things: his shooting percentage plummeted from above 60 percent to around 50 percent last year because he's getting fewer dunks and layups and more half hooks and bunnies, and his foul rate is still high after three years. The model to fixing these is DeMarcus Cousins, who improved his efficiency through better shot selection, which is possible because he's incredibly skilled with the ball. Drummond isn't. So the answer is for him to get the ball in better position. I'm not convinced Jennings or Jackson are built to facilitate that.

FLANNERY: What can I say, I'm a believer in Stan's coaching. Not so much of a believer that the Pistons will transcend the limits of the roster he's assembled, but a believer nonetheless. I've got them at 35-40 wins, which puts them right in the middle of that crowded mediocrity we call the East. We'll see how patient Van Gundy is if this team fails to make a meaningful playoff chase.

ZILLER: The crazy thing is they weren't really out of the playoff chase until March last year despite the poor record. Even a modest improvement gets then right in the conversation, which presumes improvement. I think this is still a roster in need of trades, so some midseason activity could further push them toward respectability.

FLANNERY: So, coach Stan is going to have to rely on team president Stan. That should go well.