FLANNERY: What can the Warriors do for an encore? They had the best player and the best team by a wide, vast margin. In my mind, they also had the best coach, the best defensive player and maybe the best Sixth Man too. The front office pushed all the right buttons, and even when things didn't work out the way they envisioned -- David Lee getting hurt -- they turned out perfectly. What a remarkable year they had. 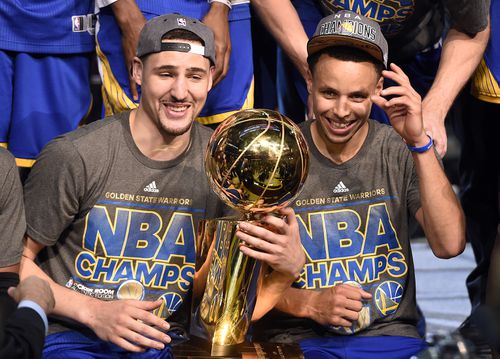 In one sentence: The defending champions are favored to win again, but repeating is very difficult.

Can they do it again?

ZILLER: There are two ways I look at this. The first is that it's incredibly difficult to win a title, let alone multiple titles. So much has to go so right. And so much did go so right for the Warriors! Their only major injuries were Lee (which fortuitously opened a spot for Draymond Green in the starting five) and a late Marreese Speights malady. Keeping that many stars almost completely healthy for an 82-game march and a 21-game playoff sprint is remarkable. The odds of that repeating seem slim in today's NBA.

That said, the Warriors were by far the best team in the league. Their margin for error was considerable, and they are good enough to survive a major injury to anyone but Stephen Curry. I feel like they also improved the rotation with the reliable Jason Thompson; you also expect Green, Klay Thompson and Harrison Barnes to improve given their ages. The foundation is ridiculously solid, the upside is obvious and Steve Kerr has earned a ton of trust from the team and all of us. I can totally see them doing it again.

FLANNERY: Sure, absolutely. They're the favorites coming into the season and deservedly so. Don't sleep on Festus Ezeli either. If he can stay healthy and become a reliable contributor, he gives them a lot of cushion to rest/maintain Andrew Bogut throughout the season.

Repeating is just so difficult. We've become numb to the idea in recent years, given teams like the 90s Bulls and the 2000s Lakers, as well as LeBron's Heat. I'm old enough to remember when repeating was only something Bill Russell did. Now, it's expected.

There's injuries, of course, but there's also that complacency that settles in for a defending champ. The regular season doesn't seem so vital anymore. There's slippage, there's passive-aggressive grumbling, there's a million other things that enter into the equation. Playing in the West doesn't help either. That was Miami's advantage. They knew there were only one or two teams that could actually beat them in the playoffs and they reacted accordingly. The West is a minefield and the Dubs were fortunate enough to avoid the Spurs and the Clippers en route to the Finals.

So, yes. Golden State can absolutely do it again. My theoretical money's on the field.

ZILLER: That's smart, and I've rocked on this repeatedly. The fact that we DIDN'T get to see the Warriors against the Spurs or Clippers in the playoffs actually increases the uncertainty for me: Golden State punted L.A. during the regular season, but S.A. played 'em well. Both those teams improved more than did the Warriors, in theory. So a tough call becomes tougher.

I wonder how much better Curry can get. He's a shooting god, and better at the supplemental facets than people think. But he's also cocky as hell with the ball, quite loose with the dribble. He's a bit Iversonian, though far more efficient. I wonder if he'll be motivated to tighten up and become more of a Stockton/CP3 or, given his incredible success, will embrace bombast even more. Kerr doesn't seem to mind.

FLANNERY: He shouldn't! The bombast is what makes him great. Curry has to have that. If he played more under control he wouldn't be so dangerous. Let's be real: Steph takes shots that would get almost every other player in the league benched immediately. He makes them, which is talent, but he takes them, which keeps defenses honest. Remove that element from his game and he becomes a very good player, but not an MVP.

How much better can he be? Curry has reached an improbable level, given his physical limitations. This is as good as it gets, and if he 'improves' it will be by minute degrees. But I do think there's a higher ceiling for Klay Thompson, Draymond Green and especially Barnes and Ezeli. It sounds like I'm arguing against their chances to repeat, but of all the teams in the league, the Warriors have the best chance to morph into a dynasty.

Read these other Warriors previews!

Can anyone knock the Warriors off?

The Warriors enter 2015-16 as loaded as they were last season.

Warriors bring the band back together

They only made a few small changes to the roster.

Read these other Warriors previews!

Can anyone knock the Warriors off? Warriors bring the band back together

It's interesting that at various points during the season we spoke of the Warriors as a transitional team in the league's history. There's a very good chance they will transcend that status. Who do you see as their biggest challenger?

ZILLER: The Thunder, for one: two top-7 (maybe top-5?) players and a good supporting cast (well, maybe) don't lie. And my title pick, the Cavaliers, plus the usual suspects (S.A., your boys in L.A.). I think Cleveland is the team most likely to stop them. I think the Thunder and Spurs have good chances, the Rockets and Clippers have chances and the Grizzlies have an outside chance.

I know you like the field. Which team should scare Golden State the most?

FLANNERY: I'm taking the Clippers to win the whole thing, but I would take San Antonio as the biggest threat to Golden State. Such is life in the West.