(This article was originally published on May 4, 2015)

The Old John Wall Scouting Report no longer works. NBA teams must rip out that page, crumple it into a wad and throw it in the trash -- if they haven't already. That thing's three years old and was only sparingly useful when it got trotted out last year. It is completely worthless now.

Just ask the Atlanta Hawks and Toronto Raptors. For five games they've defended Wall by yielding space in pick and roll situations, thinking they could block his driving and passing options and force him into taking the pull-up jumpers. The Old John Wall Scouting Report says he doesn't convert those well. They figured that if they gave him space, he'd miss enough jumpers and get overwhelmed with a series of Plan Bs that aren't his strength.

They were shredded because Wall has seen The Old John Wall Scouting Report for years and slowly learned how to beat it.

It starts with his jumper, which has grown from errant to competent thanks to his tireless work. Anyone lucky enough to sit courtside an hour before Wizards games since 2010 has seen Wall and an assistant coach -- first Sam Cassell, now Howard Eisley -- methodically work on pull-up jumpers. It's paid off: Wall's mid-range shooting percentage has risen from just over 31 percent as a rookie to 40 percent this season. He's even added a floater that won't be mistaken for Tony Parker's yet, but is still a functional shot.

Teams will yield pull-up mid-range attempts and floaters in this day and age even to the best shooters, but it's important for point guards to have that ability in bail-out situations. Otherwise, a possession like this is toast.

It starts with finding the right angle on the screen. The goal of any pick and roll, as simple as it sounds, is to create an advantage that puts the primary defender on the point guard's hip. That can be accomplished in multiple ways, whether via an old-fashion solid pick or a screen that doesn't make significant contact, but diverts the defender enough to yield that advantage.

Either way, point guards need to take the proper angle, so they can make it easy for their big men to create separation. Wall's method of choice is deadly considering the screen-setting talent on the Wizards' roster. He'll appear to be looping away from the hoop, then sharply veer in a straight line to guide the defender into a big man that's about to make himself big. It's almost like a reverse check mark.

The end result is that Wall is almost shoulder-to-shoulder with his big man as the screen is set. The Wizards, more than most teams, toe the line between legal and illegal screens. The big reason they do so without crossing that line is Wall's technique looks natural in real time. 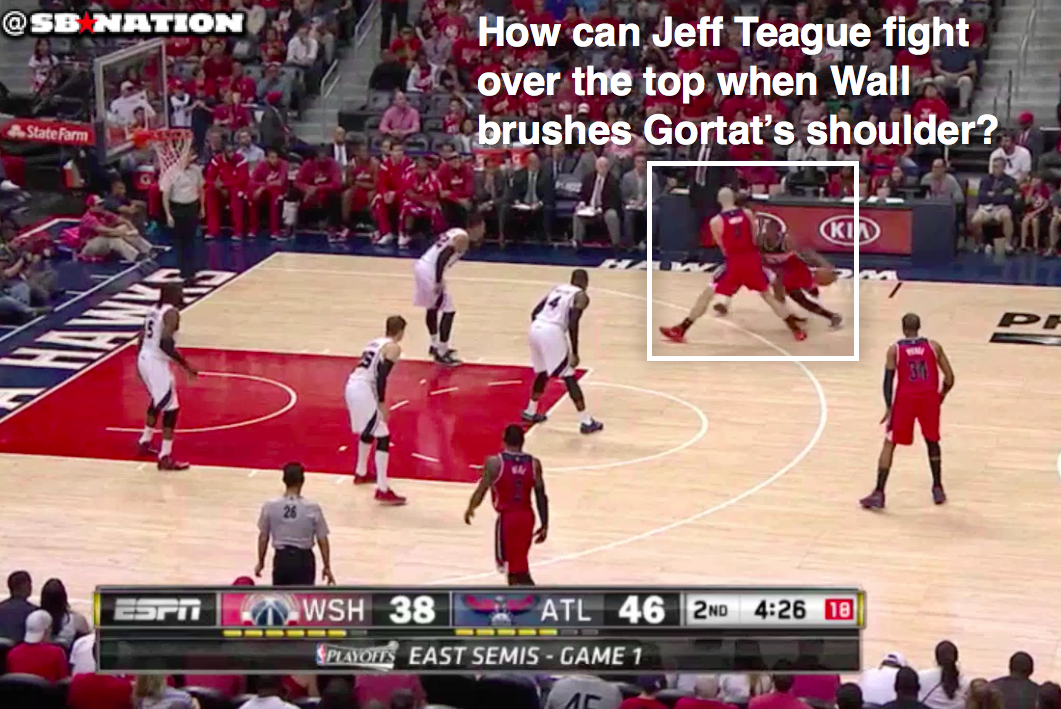 Once the primary defender is behind him, Wall reads the big man. Five years in the league has given Wall plenty of time to learn their tendencies. This is something so many miss when evaluating point guards early in their career. Wall probably knew what he was supposed to do against players like Al Horford, but didn't have enough experience to put it into action until he built up enough reps.

Now, he has the reps, so he knows when he has an opening to pull up for the jumper ...

... when he can bait the big man into coming out to set up the roller, as he does in the example we showed earlier.

... or when he can fool him with a drive and kick.

With all those tricks, natural athleticism, vision and a tighter handle, Wall can pull off the kind of assists that make him look like a taller Chris Paul. Consider the game-sealing bucket Wall set up for Marcin Gortat on Sunday. Wall didn't make contact with Gortat's screen because he realized he could get his shoulders by Jeff Teague's by faking in the direction of the pick instead of actually using it. Once in front, Wall crossed back right to get his entire body in front of Teague's, a move called "snaking" that Paul popularized. 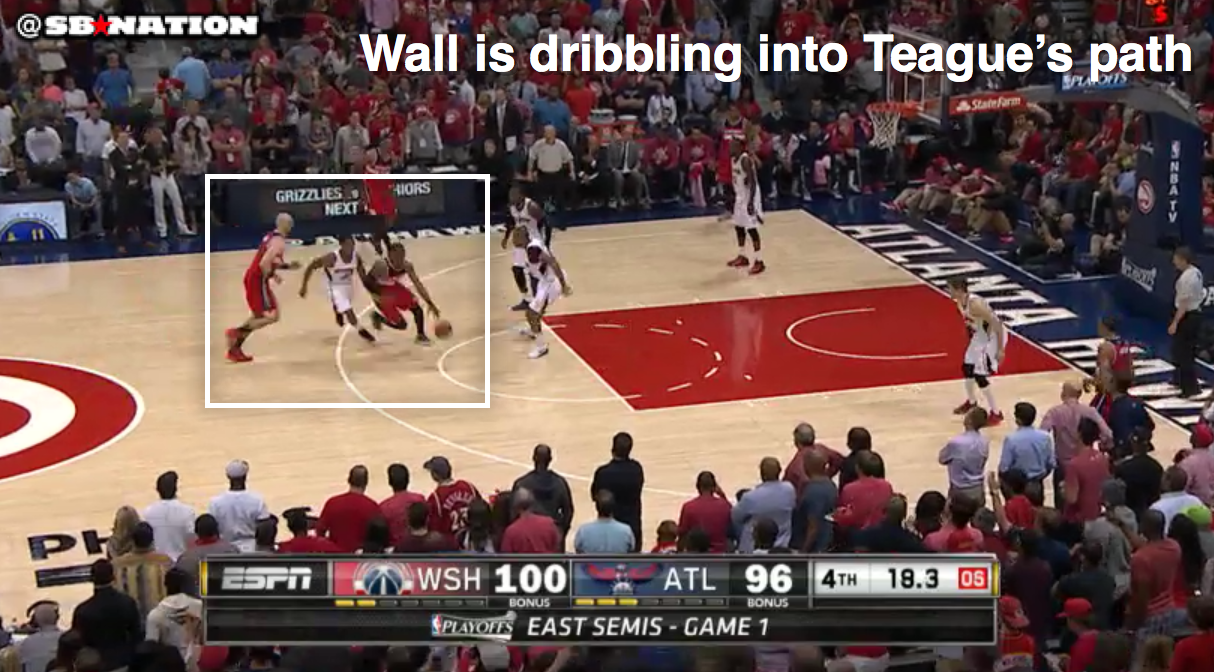 With Teague out of the play, Wall plotted his next move. He veered out initially while keeping Teague on his hip, then accelerated towards Horford and jumped in the air. This is where Wall's athletic gifts blended with his superior court vision and high basketball IQ. He knew he had two possible targets: the rolling Gortat and the sharp-shooting Bradley Beal in the left corner. He also knew he had to beat two defenders, three if you include Teague riding his hip. In one motion, Wall:

You can't see all this unless you watch in slow motion. Look carefully at Wall's head and Carroll's entire body. Notice how the former is looking sideways and the latter doesn't move an inch until it's too late. Even in slow motion, it happens so quickly that you may need to watch multiple times.

They'll keep getting burned if they don't go back to the drawing board. There is no successful New John Wall Scouting Report yet, and the Hawks have less time to come up with one.

SB Nation presents: As the playoffs intensify, so do the fights