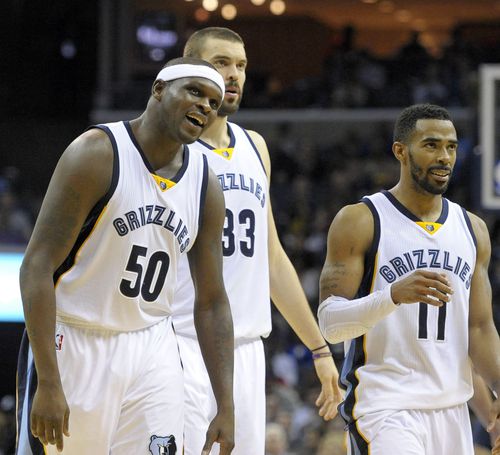 In one sentence: The Grizzlies are still a factor in the West, but their age has to start showing at some point.

I think there are two ways of viewing that result. The more cynical is that once the Warriors figured out how to beat Memphis, they stomped them and other teams (many of whom are mimicking the Warriors) will follow suit. The other more hopeful viewpoint is that if Memphis were healthy and a little better they could have pushed Golden State to seven and maybe beaten them, which places them as a true title contender. What do you think?

FLANNERY: We all know that it takes a few breaks to win a title these days. Whether it's health or matchups or a lucky bounce or a call, some good fortune must come your way. I feel like the Grizzlies need more than most of the other contenders to compensate for their obvious lack of shooting. It's not that everything has to go just so, but a LOT of things need to break their way if they're going to break through.

That said, they're still good enough that you have to take them seriously among the other good teams out West. I take a lot of comfort in knowing that Z-Bo, Gasol, TA and Mike Conley are still coming to step on your neck. You can't break up a team like this, but there isn't a lot you can do to make it better either. So, it's a conundrum, albeit one that about 23 other teams would probably sign up for.

Good lord, I just realized that Matt Barnes is on the roster. How'd you like to have to play against that team?

ZILLER: I would not. This is the closest thing our NBA has to the Bad Boys or the Heat or Knicks of the '90s. You're not leaving Memphis without some scratches or bruises this season.

And that's something, right? They aren't in any sort of vogue stylistically. Little shooting, only two playmakers (Conley and Gasol) and they lean heavily on the best garbage man of his era (Z-Bo). They do not do the things every other team tries to do, and they don't even really make an effort to pretend to do those things. But they are tough, they defend hard and they pound you relentlessly. That's admirable and worth respecting, both for us as observers and analysts and for their rivals.

The shooting thing is an issue, still. They are relying on Conley, Jeff Green, Barnes and Courtney Lee to hit enough deep shots to get a little space. I just don't know. I was initially high on the Brandan Wright deal, and I still think it will work out very well. But looking at the roster now and seeing what their rivals did, I'm a bit curious as to why they didn't chase a Dorell Wright (who went to China) or target a better shooter in the trade market.

FLANNERY: We act like finding shooters is the easiest thing in the world, but then you see who's available and it's a lot of Dorell Wright's. Maybe you get lucky and get Rasual Butler at the right time, or maybe Courtney Lee and Jeff Green hit a bunch of shots when you really need it.

I do worry that time is running out for them. You have Golden State, San Antonio, Houston, OKC, the Clippers ... do they still fit in that upper tier? I think they do, but when the fall happens, it's not going to be pretty. How long do you think they have left on this run?

Read these other Grizzlies previews!

The window is still open

But it will close soon, so now's the time to act.

Memphis keeps the band together

The Grizzlies are hoping that some minor tweaks around the edges can get them over the top.

Read these other Grizzlies previews!

The window is still open Memphis keeps the band together

ZILLER: A couple of years. I've been burned by Z-Bo before — he needs no youth to reek havoc. Gasol and Conley are right in their primes and the supporting cast has enough quality minutes and tons of defense in it. Barring an injury to Marc or Mike, I think they are in that contenders' tier, albeit with a lower ceiling than GSW or SA.

Sustainability is an issue for this team as there isn't a potential star being groomed for down the line. What's your take on their life expectancy and ceiling?

FLANNERY: Two years sounds about right, which is how long they have Z-Bo and TA under contract. Much as I love those guys, the key players are Conley and Gasol and they are right in their primes. There's no reason they can't create a perfectly good team around those two when this run is all over. Expectations? 55 wins. Ceiling? Depends.

It just never changes, and I'm happy about that.