FLANNERY: I don't think there's any middle ground to be had on the Heat. One either thinks they're Cleveland's top challenger in the East or one thinks they're destined for disaster, given the top-loaded contracts, advancing age and injury history of their best players, to say nothing of their reliance on Hassan Whiteside's continued growth and maturity.

I get the arguments against Pat Riley's position, but I'm all in on the bandwagon. Call it a hunch, call it a gamble, call it a desire to see LeBron vs. D-Wade in the conference finals, but I'm there. How about you? 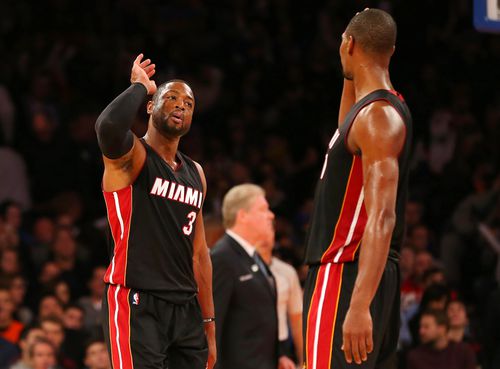 In one sentence: If games were played on paper, Miami would be a title contender, but paper doesn’t account for injuries or age.

ZILLER: I was stunned how bad they were down the stretch last season. It goes to show you how important and flat-out good Chris Bosh is for Miami. I feel like Whiteside as a major offensive contributor is far more tenable when defenses have to respect Bosh's range and that Whiteside as a defensive anchor is far more tenable when you have Bosh making smart decisions (as he typically does).

I'm most concerned about how Goran Dragic and Wade mesh, and whether Dragic and his old floor-running buddy Gerald Green can manage when Wade inevitably sits out 20 games. Luol Deng's mileage is another concern, though he was fine last season. The clock is ticking on multiple pieces here, and there's a sense that the clock might strike midnight for Whiteside at any point. That's why I'm reserving some skepticism despite a deep, abiding love for Wade's game.

FLANNERY: I think you're contractually obligated from here on out to mention how much you love D-Wade until his retirement.

I get all that and I still think they've got the goods, for this year at least. A lot of that has to do with Bosh. He's one of the game's true underrated greats. If he's limited in any way, then I reserve the right to back off my optimism. Really, believing in the Heat is a leap of faith and I'm inclined to make that jump because Riley just always seems to fall out of tress and land on his feet.

Look at the Justise Winslow thing. Riley had no desire to be in the lottery and he could have lost that pick with a wayward ping-pong ball or two. Lo and behold, the dude just falls into his lap while Danny Aine, his longtime antagonist, does everything in his power to get the guy. There's luck and there's Riles.

All that said, he may have left them in deep trouble down the line if this falls apart.

ZILLER: Oh, you just can't trade an unprotected future pick for a guy like Dragic when your best player is a 30-something guard with a death wish. If THAT doesn't bite Riley in the ass, we'll know he's made a deal with the devil.

Winslow is a major prospect -- I badly wanted him on the Kings -- and given that the Heat are relatively shallow beyond the starting five, he should get plenty of minutes. But Miami is aiming higher than a mere playoff berth, and rookies usually fare poorly on big stages. Can you imagine Winslow having to line up against LeBron in the second or third round?

All told, that'd be a nice problem to have, because it will have meant Riley's bet paid off in some fashion. I wonder if he sees this season like 2004-05, a mix of vets and youth to see what he has before making one big run at a title. (If so, Spo should watch his back.)

Read these other Heat previews!

The Heat will bounce back

Last season was a disaster for Miami. That won't happen again.

Miami's roster is loaded ... if healthy

If the Heat avoid injuries, they have the second-best team in the East on paper.

Read these other Heat previews!

The Heat will bounce back Miami's roster is loaded ... if healthy

FLANNERY: I think that's why I'm so drawn to this team. It could fall apart or it could be yet another triumph. The league needs more risk-takers like Riley.

One thing I've learned over the years is to never count Pat out. He's always got another move, another sleight of hand. With any other franchise, there's an uncomfortable air of desperation to the offseason maneuvers. With this one, it's all so quintessential Riles. What can I say? I'm a sucker for the sheer ballsiness of it all. (I'm not worried about Spo, either.)

In the final analysis I've got them penciled in as the second-best team in the East. I don't think they'd be able to get past LeBron, but I'd love to see them try. What say you?

ZILLER: I don't think they'll be as good as Chicago (another question-riddled team) and I have Atlanta, Washington and Toronto as equals. To me, Miami has the highest ceiling and lowest floor out of any of those clubs. So in the 3-6 seed range for me.

It would take grave Cavaliers misfortune for Miami to knock them out, in my opinion.