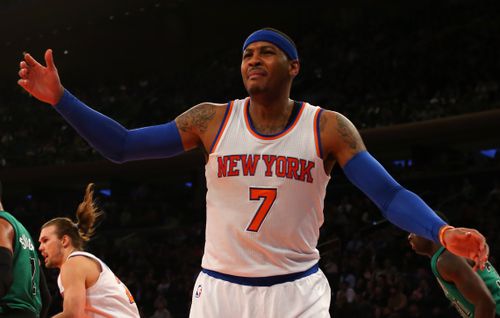 Biggest loss: Nobody that plays on a 17-win team is a big loss.

In one sentence: The Knicks had a sensible summer, but goals should be modest.

ZILLER: This may sound crazy, but I actually think the Knicks are a decent bet to be totally respectable this season. There's no way they'll be as bad as they were last season barring an early catastrophic injury to Carmelo Anthony. They had what I like to call a snowball season: a few early misfortunes and some disappointment snowballed to the point where the mere idea of being competitive felt like a waste of energy. Once it appeared Melo was playing only to get into the New York All-Star Game, the cause was lost.

Talent-wise, the Knicks are overmatched by a half-dozen teams in the East. If we assume Derek Fisher isn't actually the worst coach in the league and Melo has some pride -- I feel comfortable on both counts -- this team could and should be right in the mix with the low-end playoff contenders. Right?

I think the Knicks will be better. I mean, of course they'll be better. Assuming good health, Melo will be fine and a healthy Melo means they'll be respectable at the very least. We have no idea if Fisher can coach and I wouldn't presume either way. What gives me pause are the offseason additions: Robin Lopez will be good, no question, and I love Kyle O'Quinn, but Arron Aflalo hasn't been good for a few years and Derrick Williams has never been good in the pros.

I look at them and I see a 30-win team. That's not nearly good enough, even in the East.

ZILLER: I suppose my feeling is that they would've been a 30-win team last year if they didn't give up on respectability in basically December. The roster is better. With 50 games against the East and, like, four real good teams, there's a lot of opportunity for victory. Maybe I'm too confident in Melo's interest in competing on both ends and the instant impact of Kristaps Porzingis, but hey: I think 41 wins is possible.

Are you buying Phil Jackson's overall philosophy? Is there one?

FLANNERY: I'm not sure what it is yet, which isn't the same as saying there isn't one in place. On the one hand, giving Melo that massive extension didn't seem in line with Jackson's values, but taking Porzingis seems like an inspired -- if relatively obvious -- choice. My issue with how Phil has gone about his business is that he didn't extract much value from his fire sale. One only needs to look at how his regional rivals in Philly and Boston handled their overhauls. Just because the Knicks were so mismanaged for so long doesn't mean that Jackson should be graded on a curve.

That's a long way of saying, I don't know. Maybe? There's a lot we don't know yet about these Knicks.

ZILLER: Here's another thing: Phil is 70! Even Red Auerbach had moved somewhat into the background by that age. There aren't many 70-year-olds up for the task of rebuilding a moribund professional sports franchise in the boiler room of New York City. And it's really not clear he has been able to get the people he wants in the front office to help him out. This would be a tall task even for energetic, experienced GMs. Phil was essentially a 69-year-old rookie last year.

That said, I think setting a basketball ethos before you have young elite talent is silly. Melo is not going to be on the next great Knicks team, right? I think he's 18 months from a trade to the Wizards or Hornets, after the former strikes out on Durant or the latter decides it needs a legit star, no matter the age or contract. So I'm not really concerned with Phil's vision for the Knicks until Porzingis breaks out or they get another young stud or two.

Read these other Knicks previews!

Any outcome will be better than last year

Last year was about preserving a draft pick. This year will be about pushing for relevancy.

Knicks are flawed, but making progress

Read these other Knicks previews!

Any outcome will be better than last year Knicks are flawed, but making progress

Then, let's see what sort of team this will be. The Philadelphia method of setting an ethos and chasing players to fit it is great ... until you are cornered into taking a top draft pick like Jahlil Okafor who doesn't really fit. Besides, this dude is going to live and die on The Triangle until someone builds the offense a statue or something.

FLANNERY: God, an aging Melo trying to carry the Hornets to a .500 record is the most depressing thing.

So, yeah. I have my doubts about the entire enterprise, and while they may be better in the short run, they're a long, long way from achieving any kind of spiritual enlightenment, let alone a decent level of competitiveness. Sorry, man. I just don't see it.

ZILLER: Classic Philly/Boston hater. Hey, if it could happen for the Mets ...