FLANNERY: Let me stipulate that I've been very wrong about Oklahoma City for the last few years. I had them winning everything last season and while you can't account for injuries, a few of their weaknesses were revealed. They haven't adequately replaced Thabo Sefolosha's 3-and-D game from the wing, and their development record has been spotty the past few seasons. I didn't understand the moves (reaches, really) for Dion Waiters and Enes Kanter. The Billy Donovan hiring is a boom or bust decision that may work out well in the long-term, but it's an odd time time to experiment with the most tenuous season in franchise history.

Long story short, I have my doubts about this team. I get the sense that you are far more sold on OKC than I am. 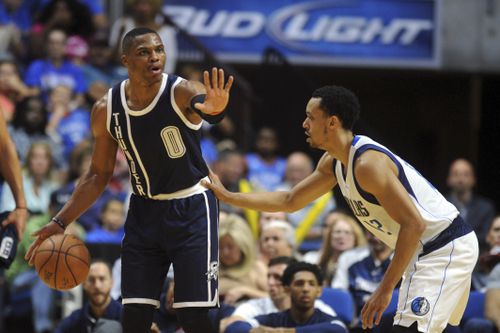 Best addition: Coach Billy Donovan, who inherits one of the most talented rosters in the game when its healthy.

Biggest loss: Jeremy Lamb, which should tell you that OKC didn’t lose much in the offseason.

In one sentence: It’s championship or bust for the Thunder as Durant enters free agency next summer.

ZILLER: I am much higher on the Thunder. I have some reasons.

1. Kevin Durant and Russell Westbrook are the most powerful duo in the league when healthy. Even better than LeBron and Kyrie in my estimation. (I think LeBron and Kyrie are a smidge more redundant than KD and Russ.) You'd rather have the depth of the Rockets, Spurs or Warriors than what OKC will trot out in the second quarter. But that top-line talent is unmatchable, and we know that matters.

2. This team won 45 games with Durant missing most of the season, Ibaka missing a long stretch late and Westbrook missing games and playing hurt. To me that speaks of depth and of Russell's excellence.

3. Billy Donovan can coach a defense. If healthy, this team will have an elite offense by default. That's a recipe for magic.

I also have a feeling the Thunder will be way active to address needs (like for a 3-and-D wing) before the deadline, and they have size to spare. The clock is ticking, and they all know it.

FLANNERY: Absolutely. Those are all good points.

I want to be clear about this: I think the Thunder are very, very good and have a chance to be excellent for all the reasons you outlined. What I'm concerned about is the potential for it to blow up quickly. Let's say they get off to a slow start or Donovan has trouble adjusting to the pro game. It's not out of the question that an injury or two could play havoc with one of their frontline starters. We could say that about any of the other contenders in the West, but none of them will have their franchise player facing free agency at the end of the season.

We've already seen some of the reactions to rather innocuous rumors. This is a franchise that likes to control everything and keep the outside world at bay. You can't keep the wolves from howling during a massive free agency storm. The potential is here for a combustible mix.

ZILLER: That's fair. Westbrook's relationship with the media has been well-documented and Durant's patience with the least responsible fringe of basketball media has clearly waned. That said, this can be a unifier in the locker room. Management will be focusing on keeping as much of it as possible at bay, and I'd expect the players to be some level of pissed-off at the media for focusing so much on what's next instead of what's now.

Speaking of which, the Dion Waiters experiment is on super thin ice. I could see him collecting DNPs by the end of the season. He's like just what they don't need.

Four different writers offer their perspectives on where the Thunder will end up.

Healthy KD and Westbrook mean Thunder are back

After an injury-mired 2014-15 season, the Thunder are back at full force and looking for the first championship in franchise history.

FLANNERY: I never understood that move and I'm lukewarm on Kanter, as well. Neither seemed necessary given that they have two of the best scorers in the league and were at their best with complementary defensive-minded players around them. There's absolutely nothing wrong with a big man rotation of Steven Adams, Mitch McGary and Nick Collison around Ibaka.

It's kind of nuts that it's been three years since OKC reached the Finals. I figured they'd have at least one, if not multiple titles by now. Nothing is ever guaranteed in this league. Bottom line: If they fall short, do you see Durant bolting? I don't, but I'm less certain of it now that I was even last year.

ZILLER: I can see it, but I can see him staying too. I feel like we don't know Durant at all. Washington is going to be really attractive, and it looks like every other team will have space to accommodate him too. What a time to be a free agent.

Westbrook is the bigger flight risk to me, and he has another year under contract. But it'd be incredibly disappointing if this squad broke up before getting back to the Finals after that epic rise that culminated in the 2012 run. None of us were ready for that to be a culmination!