ZILLER: Dario Saric didn't join the team. Joel Embiid will miss another season. The team didn't reliably fill its point guard spot despite trading Michael Carter-Williams for a draft pick. Is there any reason whatsoever to pay attention to the Philadelphia 76ers as a basketball team?

FLANNERY: Depends on how you feel about Jahlil Okafor. I'm curious to see how he and Nerlens Noel play together. But that's just about it. We're in Year 3 of this thing and that's the only basketball reason to care about the Sixers. We keep saying this over and over, but at some point this has to take some kind of shape, right? 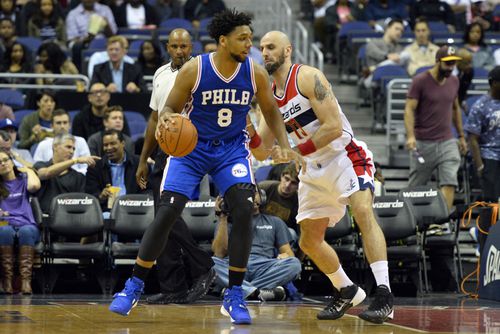 Best addition: Jahlil Okafor, who can give the team a legitimate first option on offense.

In one sentence: The 76ers continue with their process of bottoming out for high draft picks but this year they've at least added some offensive talent.

ZILLER: So the franchisee is a hedge fund type. I'm not well-versed in high finance, but I do think these folks typically want to see a big payoff. Josh Harris is content to stay in the shadows and let Sam Hinkie pursue the process; he's not out at midcourt promising a championship like some of these other guys. That sort of public posturing is both vainglorious and heartening: it shows that the people cutting the checks are emotionally invested in success. Between Harris' hands-off approach and Hinkie's cold cap calculus, I do think there's a lack of evident emotional investment from management. Brett Brown is the only authority figure who looks like he cares. I'm sure Harris and Hinkie do care -- Hinkie, for one, is putting his career on the line here -- but it doesn't translate.

And so yes, it does need to begin taking shape soon. This is another lost season. Three straight seasons where the Sixers are not even pretending to try to be competitive. No franchise has intentionally been awful this long. They didn't pursue anyone in free agency. They didn't bring Saric over. They might not have more than four legitimate NBA players in the rotation to start the season. I think this is the last Opening Day that Hinkie can run out a sub-NBA roster. He has to start giving Brown more to work with.

FLANNERY: The interesting thing about Hinkie's process is that it's designed to not get short-circuited. You either see this thing through until the end, or you admit that it's been a bust. There are no shortcuts in his process.

I don't think this has been a bust. Hinkie's mission has been to collect assets and he's done that. The payoff has been slow to develop, maybe even slower than he and upper management wanted, but that's also a function of the vagaries of things like the draft order. But you can't make people be what they're not, and standing on table tops and emoting is not their game.

Like everyone else, I do empathize with Brett Brown. He's fully committed to the cause and by all accounts he's a really good coach. I do wonder how much longer he can take it, but he also knew what he was getting into when he signed on for the job. So what needs to happen in your mind to justify continuing the experiment?

Read these other 76ers previews!

Patience is still a virtue in Philadelphia

Patience is still a virtue as the tank, and The Process, roll on.

There's finally some talent in Philly

The 76ers continue with their slow rebuild but have added some talent that should make them more entertaining in 2015/16.

Read these other 76ers previews!

ZILLER: I think Okafor and Noel need to show they can be real good NBA players, and like I said, I think this is the last year you can fully tank. Saric should be coming over in 2016, and you'll have another high draft pick plus in all likelihood a mid- to low-lottery pick from the Lakers. Including what happens with Embiid, that's your asset base. Add some free agents or trade targets and actually try to win 25 or 30 games in 2016-17.

I just think another invisible offseason and lost season are untenable. At some point, the foundation is poured and you need to start building some walls.

FLANNERY: We're talking about gentrification aren't we? Philly knows all about that.

You're right from a perception standpoint, but I don't think we can include Embiid in any future plans until he actually sees the court. Saric either. That's why I'm not convinced this is the last season of tankathon.

ZILLER: Hey, LeBron Jr. is only like 10 years away from the NBA, right? Trust the process.